A console game is a form of interactive multimedia used for entertainment. The game consists of manipulable images (and usually sounds) generated by a game console, and displayed on a television or similar audio-video system. The game itself is usually controlled and manipulated using a handheld device connected to the console called a controller. This is a list of the ten best selling console games. 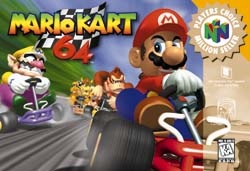 Mario Kart 64 is a racing video game developed and published by Nintendo for the Nintendo 64 video game console. It was released on December 14, 1996 in Japan, February 10, 1997 in North America, and June 24, 1997 in Europe. Mario Kart 64 is the sequel to Super Mario Kart for the SNES. Changes from the original include the move to 3D computer graphics and the inclusion of four player support. Players take control of characters from the Mario universe, who race around a variety of tracks with items that can either harm an opponent or aid the user.

Still have that old Nintendo 64? Race your friends one last time with Super Mario 64 at Amazon.com! 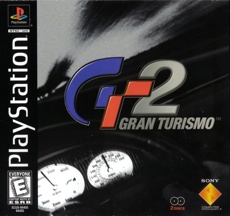 Gran Turismo 2 (commonly abbreviated to GT2) is a racing game for the Sony PlayStation. Gran Turismo 2 was developed by Polyphony Digital and published by Sony Computer Entertainment in 1999. The games serves as a sequel to Gran Turismo. The player must maneuver an automobile to compete against artificially intelligent drivers on various race tracks. The game uses two different modes: arcade and simulation. In the arcade mode, the player can freely choose the courses and vehicles they wish to use. However, the simulation mode requires the player to earn driver’s licenses, pay for vehicles, and earn trophies in order to unlock new courses. 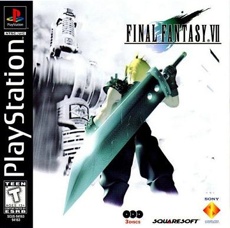 Final Fantasy VII is a console role-playing game developed and published by Square (now Square Enix), and the seventh installment in the Final Fantasy video game series. It was released in 1997. The game’s story centers on a group of adventurers as they battle a powerful mega corporation called “Shinra”, which is draining the life of the planet to use as an energy source. As the story progresses, conflicts escalate and the world’s safety becomes a major concern. 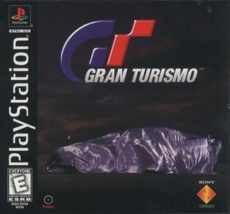 Gran Turismo (commonly abbreviated to GT or GT1) is a racing game designed for the Playstation 1. Gran Turismo was developed by Polyphony Digital and first published by Sony Computer Entertainment in 1997. Gran Turismo is fundamentally based on the racing game genre. 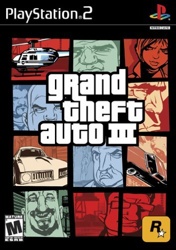 Grand Theft Auto III (abbreviated as GTA III or GTA3) is a sandbox-style action-adventure computer and video game developed by DMA Design (now Rockstar North), and published by Rockstar Games. It is the first 3D title in the Grand Theft Auto (GTA) series and the third original title overall. It was released in October 2001 for the PlayStation 2 video game console. The game centers on a nameless criminal who was betrayed by his girlfriend in a bank heist, and is required to work his way up the crime ladder of the city before confronting her. Like its predecessors, GTA III implements sandbox-like gameplay, where the player is given the freedom to explore a large city, complete missions, commit criminal acts, or complete side missions.

Who needs to ask when you wear an open invitation? Buy a “GAME ON” Black T-Shirt at Amazon.com! 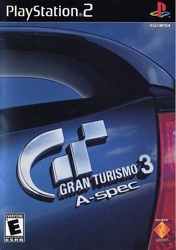 Gran Turismo 3: A-Spec is a racing game, the first in the Gran Turismo series to hit the PlayStation 2. Gran Turismo 2000 was the working name used when demonstrated at E3 2000/2001. Gran Turismo 3 features new elements to the series, such as oil changes. As the distance travelled on the motor oil accumulates, the vehicle engine’s performance degrades gradually, until a notice light is lit on the dashboard during gameplay, signaling that an oil change is needed. 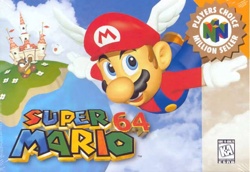 Super Mario 64 is a top-selling platform game developed by Nintendo Entertainment Analysis and Development and published by Nintendo for the Nintendo 64. It debuted in Japan on June 23, 1996, in North America on September 29, 1996. Super Mario 64 begins with a letter from Princess Peach inviting Mario to come to her castle for a cake she has baked for him. When he arrives, Mario finds out that Bowser has invaded the castle and imprisoned the Princess and her servants within it using the power of 105 of the castle’s 120 power stars. Many of the castle’s paintings are portals to other realms, in which Bowser’s minions keep watch over the stars. 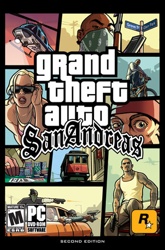 Grand Theft Auto: San Andreas is a sandbox-style action-adventure computer and video game developed by Rockstar North. It is the third 3D game in the Grand Theft Auto video game franchise and fifth original game overall. Set in 1992, the game revolves around the main character, Carl “CJ” Johnson returning home to Los Santos after learning of his mother’s murder. CJ finds his family and his old gang, the Grove Street Families, in disarray. Over the course of the game, CJ gradually unravels the plot behind his mother’s murder while reestablishing his gang and exploring his own business ventures. 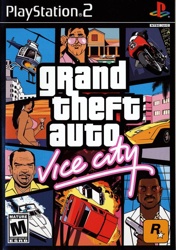 Grand Theft Auto: Vice City is a sandbox-style action-adventure computer and video game designed by Rockstar North and published by Rockstar Games. Vice City draws much of its inspiration from 1980s culture. Set in 1986, the story revolves around Mafia member Tommy Vercetti, who was recently released from prison. After being involved in a drug deal gone wrong, Tommy is forced to seek out those responsible. Throughout the game, Tommy forges out a criminal empire in Vice City, gradually obtaining contacts, running businesses and seizing power from the other criminal organizations present in the city. 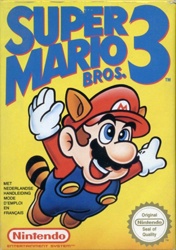 Super Mario Bros. 3 was the last major Mario video game for the Nintendo Entertainment System. It was released on October 23, 1988 in Japan, February 12, 1990 in North America, and August 29, 1991 in Europe. Super Mario Bros. 3 introduces a number of advances to the Super Mario Bros. series: the addition of a map screen, minigames, and many new power-ups, enemies, and level types. The red-haired appearance for Bowser (which would become standard in every subsequent Mario title) was introduced in this game. It also features the first appearance of Bowser’s children, the Koopalings. Unlike Super Mario Bros. 2 (US version), it remains true to the original Super Mario Bros. gameplay formula, yet it features a great deal more innovation and freshness than Super Mario Bros.: The Lost Levels. It consistently places high on ‘greatest games of all time’ lists.