A saint is a person who has been canonized (declared a saint) by the Church. This is normally considered to be an infallible decree of the Pope. Whilst most saints are canonized, a number are recognized as saints despite having not been canonized. All of the Old Testament prophets fall in to this category. Throughout history, many saints have become traditionally viewed as Patrons of various illnesses, people, and places. This is a list of ten of the most unusual patronages held by a saint.

10. St Gertrude of Nivelles Patron saint of the fear of mice (suriphobia) 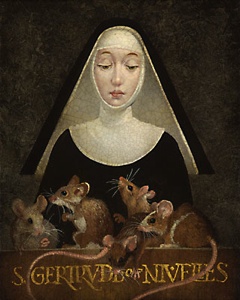 Saint Gertrude was the younger daughter of Blessed Pepin I of Landen and Blessed Ida of Nivelles; she was the sister of Saint Begga. She became devoted to religious life from an early age, and turned down a noble marriage to pursue the religious life. On the death of Pepin in 639, and on the advice of Saint Amand of Maastricht, Ida built a double monastery at Nivelles where both she and her daughter retired. Gertrude became abbess about age 20. She was known for her hospitality to pilgrims and aid to Irish missionary monks. She gave land to Saint Foillan, on which he built the monastery of Fosses. Helped Saint Ultan in his evangelization. In 656, Gertrude resigned her office in favor of her niece, Saint Wilfetrudis, and spent the rest of her days studying Scripture and doing penance.

When you’re stuck in a dilemma, call a saint. Read Patron Saints: Saints for Every Member of Your Family, Every Profession, Every Ailment, Every Emergency, and Even Every Amusement at Amazon.com! 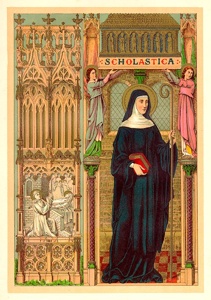 St. Scholastica, sister of St. Benedict, consecrated her life to God from her earliest youth. After her brother went to Monte Cassino, where he established his famous monastery, she took up her abode in the neighborhood at Plombariola, where she founded and governed a monastery of nuns, about five miles from that of St. Benedict, who, it appears, also directed his sister and her nuns. She died about the year 543, and St. Benedict followed her soon after. Her feast day is February 10th. 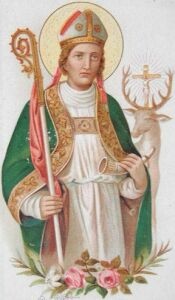 Saint Hubert was the grandson of Charibert, King of Toulouse and the eldest son of Bertrand, Duke of Aquitaine. Hubert was passionately devoted to hunting. While hunting a stag on a Good Friday morning, he received a vision of a crucifix between its antlers. When his wife died soon after this incident, Hubert renounced all his worldy positions, titles and wealth, handed his patrimony, and the care of his son, to his brother, and studied for the priesthood. He was highly revered in the Middle Ages, there were several military orders named in his honor. His association with the hunt led to his patronage of furriers and trappers, and against rabies and bad behavior in dogs, primarily hunting dogs. 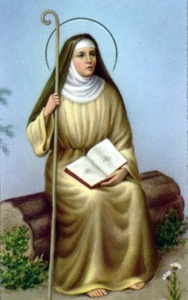 Saint Monica was the mother of Saint Augustine of Hippo, whose writings about her are the primary source of our information. A Christian from birth, she was given in marriage to a bad-tempered, pagan named Patricius. She prayed constantly for the conversion of her husband (who converted on his death bed), and of her son (who converted after a wild life). She was the spiritual student of Saint Ambrose of Milan and was, herself, a reformed alcoholic – hence her patronage of alcoholics. 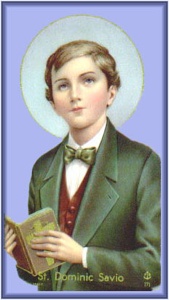 St Dominic Savio was one of ten children of a blacksmith and seamstress. He was a protege of Saint John Bosco and an altar boy at age 5. At 12 he entered the Oratory School preparatory to becoming a priest. He was well-liked and pius, but his health forced him to give up his dream of the priesthood. He died at age 15 – his dying words: “What beautiful things I see!”

5. St Isidore of Seville Patron Saint of the Internet 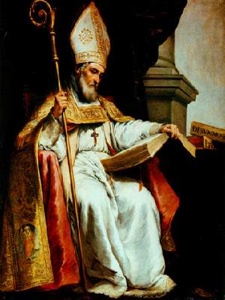 St Isidore was the Archbishop of Seville ca. 601, succeeding his brother to the position. He was a teacher, founder, and reformer. He was a prolific writer whose works include a dictionary, an encyclopedia, a history of Goths, and a history of the world beginning with creation. He completed the Mozarabic liturgy which is still in use in Toledo, Spain and presided at the Second Council of Seville, and the Fourth Council of Toledo. He also introduced the works of Aristotle to Spain. He was proclaimed Doctor of the Church by Pope Benedict XIV in 1722, and became the leading candidate for patron of computer users and the Internet in 1999. 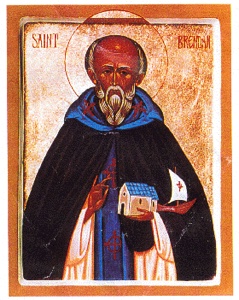 St Brenadan was the brother of Saint Briga. He was educated by Saint Ita of Killeedy and Saint Erc of Kerry and was a friend of Saint Columba and Saint Brendan of Birr, Saint Brigid, and Saint Enda of Arran. He was ordained in 512 and built monastic cells at Ardfert, Shankeel, Aleth, Plouaret, Inchquin Island, and Annaghdown. The legend which lead to his patronage of whales is as follows: Brendan and his brothers figure in Brendan’s Voyage, a tale of monks travelling the high seas of the Atlantic, evangelizing to the islands, possibly reaching the Americas in the 6th century. At one point they stop on a small island, celebrate Easter Mass, light a fire – and then learn the island is an enormous whale! 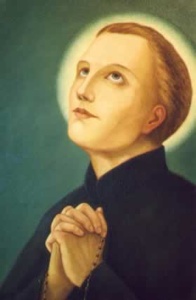 St Rene Goupil studied medicine, and in 1639 offered to work as a medic for the Jesuit missionaries in America. Missionary to the Hurons, working as a donné, a layman who worked without pay. He worked in a hospital in Quebec, Canada in 1640 and was assistant to Saint Isaac Jogues on his missionary travels. He was Captured and tortured by Iroquois, enemies of the Huron, for making the sign of the cross over a child’s head. While they were in captivity, Father Isaac received Rene into the Jesuits as a religious brother. He is the first North American martyr and his death by tomahawk in the head led to his patronage of people who work with or receive anasthesia.

Saint Polycarp was an associate of, converted by, and disciple of Saint John the Apostle. He was also a friend of Saint Ignatius of Antioch. He fought against Gnosticism and became the Bishop of Smyrna (modern Izmir, Turkey). He was a revered Christian leader during the first half of the second century. The Asia Minor churches recognized Polycarp’s leadership and chose him to be representative to Pope Anicetus on the question of the date of the Easter celebration. Only one of the many letters written by Polycarp has survived, the one he wrote to the Church of Philippi, Macedonia. At 86, Polycarp was to be burned alive in a stadium in Smyrna; the flames did not harm him and he was finally killed by a dagger, and his body burned. The “Acts” of Polycarp’s martyrdom are the earliest preserved reliable account of a Christian martyr’s death. 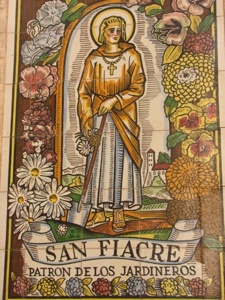 Saint Fiacre was raised in an Irish monastery, which in the 7th century were great repositories of learning, including the use of healing herbs, a skill studied by Fiacre. His knowledge and holiness caused followers to flock to him, which destroyed the holy isolation he sought. Fleeing to France, he established a hermitage in a cave near a spring, and was given land for his hermitage by Saint Faro of Meaux, who was bishop at the time. Saint Fiacre is also the patron saint of gardeners and taxi drivers.