This list doesn’t focus on an animal’s ‘ugliness’, but on their strange and unusual characteristics. Some have been around for hundreds or even thousands of years, but they may be new to you. Of course, it’s hard to choose just ten of the world’s bedazzling and bewildering beasts to turn the spotlight on, so be sure to mention your favorites in the comments. 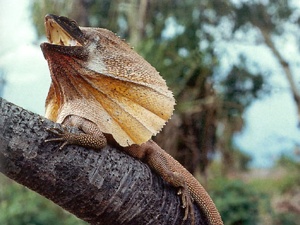 The Frill-necked Lizard, also known as the Frilled Dragon, is so called because of the large ruff of skin which usually lies folded back against its head and neck. Long spines of cartilage support the neck frill, and when the lizard is frightened, it opens its mouth showing a bright pink or yellow lining, and the frill flares out, displaying bright orange and red scales. They often walk on four legs when on the ground. When frightened they begin to run on all fours and then accelerate onto the hind-legs. The frill of the Australian frilled dragon is used to frighten off potential predators, as well as hissing and lunging. 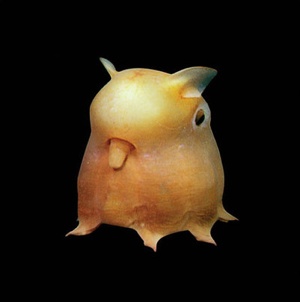 The octopuses of the genus Grimpoteuthis are also known as “Dumbo octopuses” from the ear-like fins protruding from the top of their “heads” (actually bodies), resembling the ears of Walt Disney’s flying elephant. They are benthic creatures, living at extreme depths, and are some of the rarest of the Octopoda species. They can flush the transparent layer of their skin at will, and are open ocean animals, unlike most octopi. 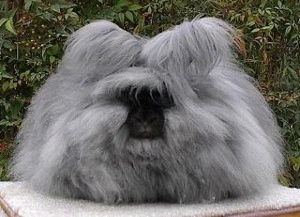 The Angora rabbit is a variety of domestic rabbit bred for its long, soft hair. The rabbits were popular pets with French royalty in the mid 1700s, and spread to other parts of Europe by the end of the century. They are bred largely for their long wool, which may be removed by shearing or plucking (gently pulling loose wool). 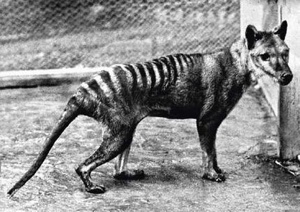 The Thylacine was the largest known carnivorous marsupial of modern times. Native to Australia and New Guinea, it is thought to have become extinct in the 20th century. It is commonly known as the Tasmanian Tiger (due to its striped back), the Tasmanian Wolf, and colloquially the Tassie (or Tazzy) Tiger. It was the last extant member of its genus, Thylacinus, although a number of related species have been found in the fossil record dating back to the early Miocene. The Thylacine became extinct on the Australian mainland thousands of years before European settlement of the continent, but survived on the island of Tasmania along with a number of other endemic species, including the Tasmanian Devil. Intensive hunting encouraged by bounties is generally blamed for its extinction, but other contributory factors may have been disease, the introduction of dogs, and human encroachment into its habitat. Despite being officially classified as extinct, sightings are still reported. 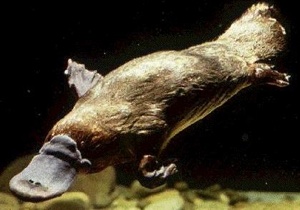 The Platypus is a semi-aquatic mammal endemic to eastern Australia. Together with the four species of echidna, it is one of the five mammals that lay eggs instead of giving birth to live young. The bizarre appearance of this egg-laying, duck-billed mammal baffled naturalists when it was first discovered, with some considering it an elaborate fraud. It is one of the few venomous mammals; the male Platypus has a spur on the hind foot, which delivers a poison capable of causing severe pain to humans. The unique features of the Platypus make it an important subject in the study of evolutionary biology and a recognizable and iconic symbol of Australia; it has appeared as a mascot at national events and is featured on the reverse of the Australian 20 cent coin. 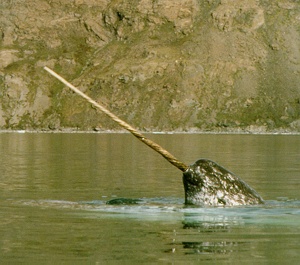 The Narwhal is an Arctic species of cetacean. It is one of two species of white whale, the other being the Beluga whale. The most conspicuous characteristic of male narwhal is their single extraordinarily long tusk, an incisor that projects from the left side of the upper jaw and forms a left-handed helix. The tusk can be up to nearly 10 feet long and weigh up to 22 pounds. About one in 500 males has two tusks, which occurs when the right tooth, normally small, also grows out. The purpose of the tusk has been the subject of much debate. Early scientific theories suggested that the tusk was used to pierce the ice covering the narwhal’s Arctic Sea habitat. Others suggested the tusk was used in echolocation. More recently, scientists believed the tusk is primarily used for showmanship and for dominance: males with larger tusks are more likely to successfully attract a mate. 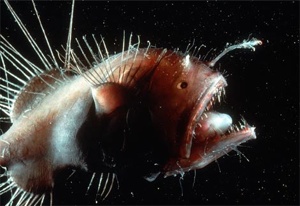 Anglerfish are named for their characteristic mode of perdition, wherein a fleshy growth from the fish’s head (the esca) acts as a lure. Anglerfish also have spines protruding from their head, movable in all directions. The esca can be wiggled so as to resemble a prey animal, and thus to act as bait to lure other predators. Deep-sea anglerfish live mainly in the oceans’ aphotic zones, where the water is to deep for the sun to penetrate; therefore their perdition relies on the “lure” being bioluminescent. Since individuals are presumably locally rare and encounters doubly so, finding a mate is problematic. When scientists first started capturing ceratioid anglerfish, they noticed that all of the specimens were females. These individuals were a few inches in size and almost all of them had what appeared to be parasites attached to them. It turned out that these “parasites” were the remains of male ceratioids 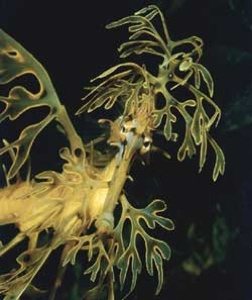 Named after the dragons of Chinese mythology, Leafy Sea-dragons resemble a piece of drifting seaweed as they float in the seaweed-filled water. The Leafy Sea-dragon, with green, orange and gold hues along its body, is covered with leaf-like appendages, making it remarkably camouflaged. Only the fluttering of tiny fins or the moving of an independently swiveling eye reveals its presence. Sea-dragons have no teeth or stomach and feed exclusively on mysidopsis shrimp. Known as “Australian seahorses” in Australia, they are found in calm, cold water that is approximately 50-54° Fahrenheit. The South Australian government since 1982 has protected Leafy Sea-dragons. 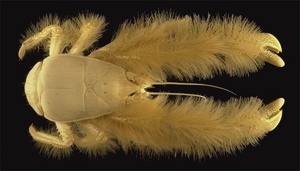 Kiwa hirsuta is a crustacean discovered in 2005 in the South Pacific Ocean. This decapod, 6 inches long, is notable for the quantity of silky blond setae (resembling fur) covering thoracic legs and claws. Its discoverers dubbed it the “yeti lobster” or “yeti crab”. Based on both morphology and molecular data, the species was deemed to form a new genus and family (Kiwaidae). The animal has strongly reduced eyes that lack pigment, and is thought to be blind. The ‘hairy’ pincers contain filamentous bacteria, which the creature may use to detoxify poisonous minerals from the water emitted by the hydrothermal vents where it lives. Alternatively, it may feed on the bacteria, although it is thought to be a general carnivore. Its diet also consists of green algae and small shrimp. 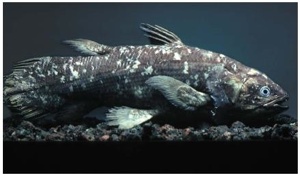 Coelacanth is the common name for an order of fish that includes the oldest living lineage of jawed fish known to date. The coelacanths, which are related to lungfishes and tetrapods, were believed to have been extinct since the end of the Cretaceous period, until the first specimen was found off the east coast of South Africa, off the Chalumna River in 1938. Since 1938, they have been found in the Comoros, Kenya, Tanzania, Mozambique, Madagascar, among other places. Coelacanths first appear in the fossil record in the Middle Devonian, about 410 million years ago. Coelacanths are lobe-finned fish with the pectoral and anal fins on fleshy stalks supported by bones, and the tail or caudal fin diphycercal (divided into three lobes), the middle one of which also includes a continuation of the notochord.