Before the arrival of the colonists, the Native Americans had already secured a foothold over the vast expanses of America. Initially, the Native Americans were treated with an almost cursory respect as the new settlers and pilgrims were afraid, apprehensive, yet friendly and hopeful. The newcomers befriended many and made what they thought were close ties with their new brethren. Unfortunately, it was not to last, and disease coupled with the settlers’ ravenous desire to claim the land as their own destroyed everything the native peoples held dear. However, most of these mistakes have since been admitted, and reparations have been made. Fortunately, history has not forgotten the many important faces and contributions of the original Americans. In honor of the United States’ Thanksgiving, here are 15 such heroes. 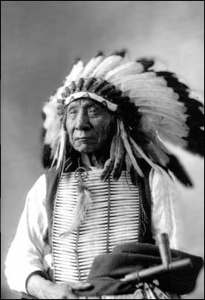 Perhaps one of the most capable warriors from the Oglala Lakota (Sioux) tribes ever faced by the U.S. military, Makhpiya Luta, his Sioux name, led his people in what is known as Red Cloud’s War. This battle was for the rights to the area known as Powder River Country in northern Wyoming and southern Montana. Eventually, he led his people during their time on the reservation. 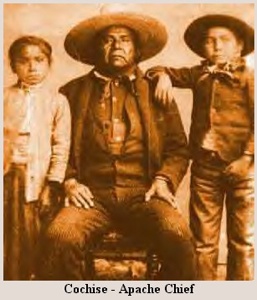 Though actually pronounced “K-you Ch-Ish,” this Apache leader is second only to Geronimo when it comes to that tribe’s historical significance. Often described as having a classical Indian frame. He was muscular, large for the time, and known to wear his long, black hair in a traditional ponytail. Cochise aided in the uprising to resist intrusions by Mexicans and Americans in the 19th century. 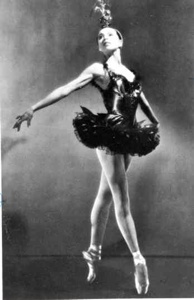 Born Elizabeth Marie “Betty” Tallchief to an Osage Nation father, she eventually became a well-known ballerina and is considered America’s first major prima ballerina. In 1947, Maria began dancing with the New York City Ballet until her retirement in 1965. Soon after, she founded the Chicago City Ballet and remained its artistic director for many years. Since 1997, she has been an adviser in Chicago-area dance schools and continues to astound future dancers with her always ahead-of-her-time abilities and was featured in a PBS special from 2007 to 2010. 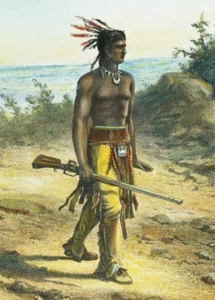 Assisting the Pilgrims during their first harsh winter, Tisquantum (Squanto) from the Patuxet tribe befriended the group to see them safely through to spring. In 1608, alas, Squanto and several others were kidnapped by Georgie Weymouth and taken aboard a ship to England. Though eventually earning a living and learning the English language, Squanto made his return home in 1613 aboard John Smith’s ship, only to find his tribe completely wiped out by the plague. 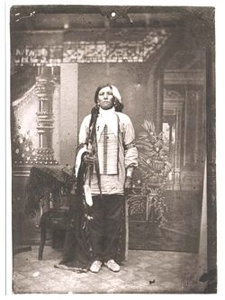 With a name in his native Lakota language, Thasuka Witko, which literally means “His-Horse-is-Crazy,” this Native American was actually born with the name: “Cha-O-Ha.” In Lakotan, it means “In the Wilderness,” and he was often called Curly due to his hair. In the Great Sioux War of 1876, Crazy Horse led a combined group of nearly 1,500 Lakota and Cheyenne in a surprise attack against General George Crook’s force of 1,000 English men and 300 Crow and Shoshone warriors. Though not substantial in terms of lives lost, the battle nearly prevented Crook from joining up with General Custer, ensuring Custer’s subsequent defeat at the Battle of Little Bighorn. Crazy Horse opposed the U.S. government in their various decisions on how to handle Indian affairs. 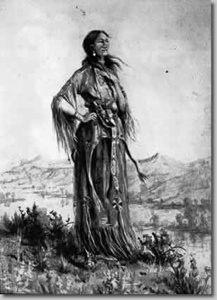 Sacajawea is most well known for accompanying Meriwether Lewis and William Clark during their Corps of Discovery expedition of the western United States in 1806. She was born in a Shoshone tribe as Agaidika, or “Salmon Eater,” in 1788. In February of 1805, just after meeting Lewis and Clark, Lewis assisted in the birth of her son, Jean Baptiste Charbonneau. Her face now appears on the dollar coin. 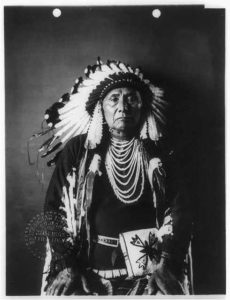 Chief Joseph was a prominent figure among the Nez Perce Native Americans in the Pacific Northwest. He is best remembered as a leader during the Nez Perce War in 1877. As white settlers moved farther west and into the vast lands of the Nez Perce, Chief Joseph did not sign a treaty that would move his people to a reservation in Idaho. He chose to flee rather than face the U.S. Army sent to remove them forcefully. He was stopped only 40 miles from the Canadian border, where he gave a surrender speech, and his people eventually settled on a reservation in northcentral Washington. Chief Joseph died in 1904, never having been able to return to his much-loved homeland in the Wallowa Valley of Oregon. 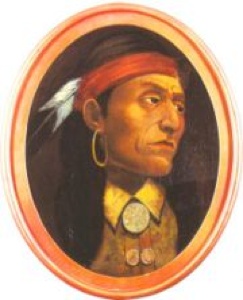 Known in his Ottawa tongue as Obwandiyag, Chief Pontiac is most well known for his defense of the Great Lakes Region of the U.S. from the British troop invasion and occupation. In 1763, Pontiac and 300 of his followers attempted to take Fort Detroit by surprise. Eventually, the revolt rose to 900 plus Native Americans, and they eventually took the Fort at The Battle of Bloody Run. Though historically a prominent figure, many are still unsure about his real importance and whether or not he was a mere follower rather than a leader. Increasingly ostracized, he was assassinated by a Peoria Indian in Illinois in 1769. 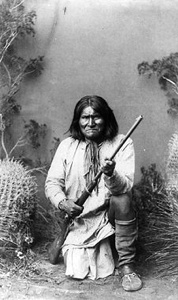 Geronimo (Chiricahua: “one who yawns,” often spelled Goyathlay or Goyahkla in English) was a prominent Native American leader of the Chiricahua Apache who defended his people against the encroachment of the U.S. onto their tribal lands for over 25 years. While Geronimo said he was never actually a chief, he was rather a military leader. As a Chiricahua Apache, this meant he was also a spiritual leader. He consistently urged raids and war upon many Mexican and later U.S. groups. Geronimo eventually went on to marry 6 wives, an Apache tradition. He staged what was to be the last great Native American uprising and eventually moved to a reservation, often permitting to appear at fairs and schools. 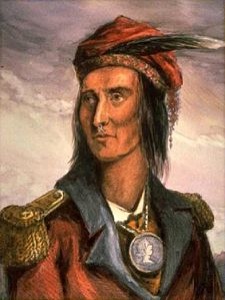 A Shawnee leader whose name means “Panther in the Sky,” Tecumseh became well known for taking disparate tribes’ folk and maintaining a hold on the land that was rightfully theirs. In 1805, a religious native rebirth led by Tenskwatawa emerged. Tenskwatawa urged natives to reject the ways of the English and to stop handing over their lands to the United States. Opposing Tenskwatawa was the Shawnee leader Black Hoof, who worked to maintain a peaceful relationship with the United States. By 1808, tensions built and compelled Tenskwatawa and Tecumseh to move further northwest and establish the village of Prophetstown near Battle Ground, Indiana. He died in the War of 1812. 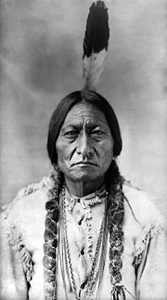 Sitting Bull (Sioux: Tatanka Iyotake—first named Slon-he or, literally, slow) was a Hunkpapa Lakota medicine man and holy man. He is famous in both American and Native American history, mostly for his major victory at the Battle of Little Bighorn against General Custer, where his ‘premonition’ of defeating them became a reality. Even today, his name is synonymous with Native American culture, and he is considered one of the most famous Native Americans ever. 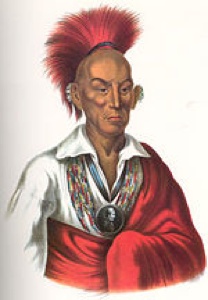 Though not a traditional tribe chief, even after inheriting a very important medicine bundle, Black Hawk was more well known as a War Chief. In his tribe’s (Sauk’s) tongue, his name, Makataimeshekiakiak, means “Be a large black hawk.” During the War of 1812, Black Hawk—the English shortened his name—became a fierce and powerful opponent. First fighting on the side of the British, Black Hawk eventually led a band of Sauk and Fox against settlers in Illinois and Wisconsin, eventually dying in Iowa. His legend is kept alive by many claiming to be directly related, like Jim Thorpe. This is, however, a myth. 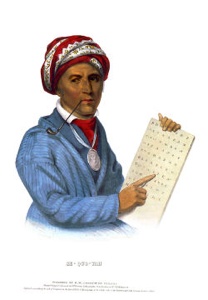 Though the exact location of Sequoiah’s birth and death are unknown due to historically inaccurate writings, he is well known through translation and spoken accounts of having grown up with his mother in Tuskegee, Tennessee. Sequoyah ( S-si-quo-ya in Cherokee), known as George Guess, Guest, or Gist, was a silversmith who invented the Cherokee Syllabary, earning him a place on the list of inventors of writing systems as well. 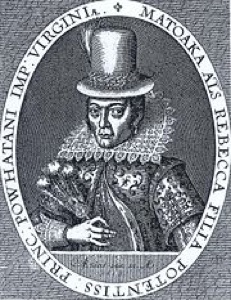 Having taken many liberties with her overall appearance, Disney created the image many of us believe to be what Pocahontas may have looked like. This is far from accurate. Though the film’s history is similarly flawed, it does hold some truths. Pocahontas was a Native American woman who married an Englishman named John Rolfe, a Jamestown settler, and became a celebrity in London in the last year of her life. She was a daughter of Wahunsunacock (also known as Chief or Emperor Powhatan), who presided over an area comprised of almost all of the neighboring tribes in Virginia (called Tenakomakah then). Her formal names were Matoaka and Amonute; ‘Pocahontas’ was a childhood nickname referring to her frolicsome nature. In her last days, she went by Rebecca Rolfe, choosing to live an English life by abandoning her Native American heritage. 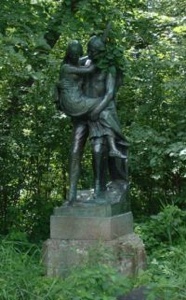 Henry Wadsworth Longfellow wrote the story “The Song of Hiawatha” loosely based on an actual Native American. Though very little is known of the historical events in which Hiawatha was a part, he was a great peacemaker and spiritual guide of the Onondaga tribe of North American Indians, to whom Indian tradition attributes the formation of what became known as the Iroquois Confederacy. Longfellow’s story is well known, however, and much of what can be read can be found here.