Dr. Seuss, the pen name of Theodore Geisel, was a writer and illustrator of 40 children’s books. His writings have become required reading for anyone who loves rhyme, nonsense, vivid pictures, and wonderful word images and some have even gone on to aid very young children in their reading. His collected works consistently rank on Top 20 lists on book reviews to this day and will likely continue to do so for years to come. On occasion, hidden within the storyteller’s prose, lies slightly hidden meanings often pointing fingers at government, special interest groups, or even human error. Here are 15 of his finest works. 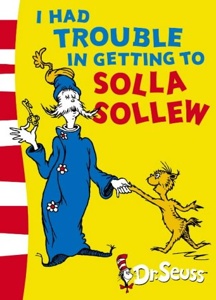 This book follows the tale of a young person who discovers the “troubles” of life and wishes to escape them. Through a series of adventures experienced when trying to reach the mythical city of the title (“where they never have troubles/at least very few”) the protagonist comes to realize that he must face his problems instead of running away from them. It features typical nonsense occurrences, as well as some mild political statements. In one instance, the protagonist is forced to pull a wagon for a bossy would-be assistant. In another scene, he is drafted into the army under the command of the fearsome, but basically cowardly, tyrant General Genghis Khan Schmitz. The protagonist’s yearning for Solla-Sollew, and his difficulties in getting there, forshadow a more bleak phase of Seuss’s writing. 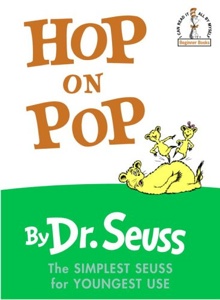 Subtitled “The Simplest Seuss for Youngest Use,” this book is perfect for teaching the rudiments of reading. Simple rhyming words, such as PUP and UP, are stacked one over the other in large capitals, so that readers see that “up” is contained in the word “pup.” Sentences using these words are accompanied by humorous illustrations to complete the playful reading lesson. 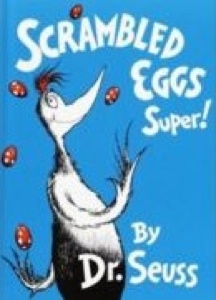 Peter T. Hooper doesn’t like to brag, but he may be the most creative, adventurous cook in children’s literature. Searching for ingredients for his Scrambled Eggs Super, he’s off on a series of egg-collecting expeditions. Wacky Seussian birds roost in every imaginable nook and cranny, and the rollicking, rhythmic text is bursting with names like Ham-ikka-Schnim-ikka-Schnam-ikka Schnopp. Eventually, after amassing the enormous egg stash and nearly filling his kitchen, Peter creates his homemade recipe and ultimately realizes that it tastes pretty much as he imagined it would. 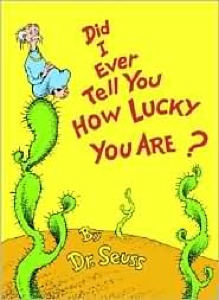 A little boy who feels sad and blue learns that he is lucky after listening to an old man talk of other people’s misfortunes. Compared to the problems of some of the creatures the old man describes, the boy is really quite lucky. The ultimate lesson being, of course, that you are always better off than you think you are. 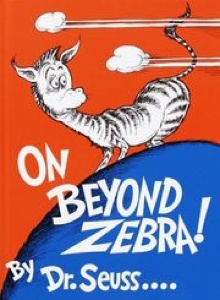 Of all the Seuss books, this one fits best into the genre of ‘literary nonsense’. The young narrator, not content with the confines of the ordinary alphabet, invents a whole new one that pushes beyond the penultimate, ‘Z’, with a fantastic creature corresponding to each new letter. The creatures include favorites such as the Floobooberbabooberbubs, large buoyant heads which float serenely in the water. These naturally serve as the example for the letter “Floob”. The mind of a child is once again beautifully rendered here showing us all that the confines of normalcy can always be stretched. 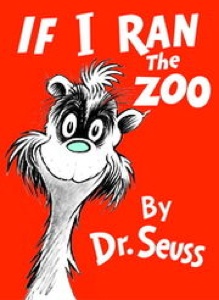 Seuss is credited with inventing the word “Nerd” with the sentence “And then, just to show them, I’ll sail to Ka-Troo/And Bring Back an It-Kutch a Preep and a Proo/A Nerkle a Nerd and a Seersucker, too!”
In the book, Gerald McGrew is a kid who, when visiting a zoo, finds that the exotic animals are “not good enough”. He says that if he ran the zoo, he would let all of the current animals free and find new, more bizarre and exotic ones. He also imagines the praise he receives from others, who are amazed at his “new Zoo, McGrew Zoo”. The book illustrates well the theme of children’s imaginations always being better than the subject at hand. 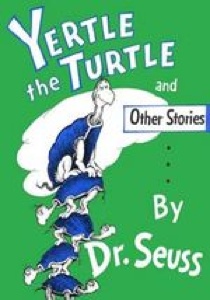 The story revolves around a turtle named Yertle (hence the name of the book) who is the king of a pond. He commands the other turtles to stack themselves beneath him so he may have a throne high enough to see and rule over more land. A little turtle named Mack, who is standing at the bottom of the pile, complains, “I know, up on top you are seeing great sights, but down here at the bottom we, too, should have rights.” Yertle refuses to listen to Mack’s pleas and commands more and more turtles to add to his throne. When Yertle notices the moon rise above him as the night approaches, he decides to call for 5,607 more turtles for the stack to try to rise above it. However, before he can give the command, Mack, strained and angry, burps, shaking the stack of turtles and tossing Yertle off into the mud. The story ends with: “And the turtles, of course… all the turtles are free, As turtles and, maybe, all creatures should be.” It is said by Dr. Seuss himself that “Yertle the Turtle” was modeled after the rise of Hitler. The book explained his feelings about fascism, Nazis, and delusions of grandeur. 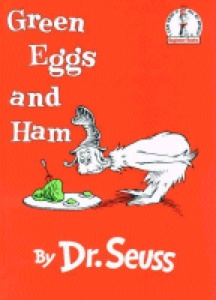 There are two main characters in this book: one named Sam, and a second who is never named. Sam is filled with energy and enthusiasm; his opposite number is grumpy and irritable. The plot revolves around Sam’s efforts to get his friend to try “green eggs and ham”. The friend refuses to taste the dish, and only wants to be left in peace. Sam goes through a plethora of locations (house, car, tree) and dining partners (fox, goat, mouse) trying to persuade his friend to eat, but without success. The triumphant conclusion of Seuss’s tale occurs when Sam’s pal, standing in shallow water after a train crash, surrounded by various people and beasts, finally succumbs and agrees to try the delicacy pronouncing it quite tasty. This book clearly illustrates the old axiom, “You will never know until you try it.” 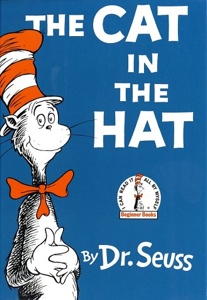 In this, the first book featuring the character, “the Cat”, he brings a cheerful, exotic and exuberant form of chaos to a household of two young children one rainy day while their mother is out. Bringing with him two creatures appropriately named Thing One and Thing Two, the Cat performs all sorts of wacky tricks to amuse the children, with mixed results. The Cat’s antics are louted, yet ultimately ignored, by the family pet, who is a sentient and articulate goldfish. The children (Sally and her older brother, who serves as the narrator) prove to be quite typical latchkey children by capturing the Things and bringing the Cat under control. He cleans up the house on his way out, disappearing seconds before the mother arrives. Seuss wrote the book because he felt that there should be more entertaining and fun material for beginning readers. From a literary point of view, the book is a feat of skill, since it simultaneously maintains a strict triple meter while it keeps to a tiny vocabulary, and still tells an entertaining tale. 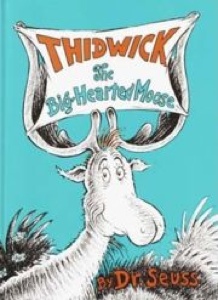 Thidwick, one of 60 moose in a herd, accepts a bug living on his antlers, who tells a spider of the luxury, and both accept a “Zinn-a-zu” bird. The herd rejects Thidwick after the Zinnazu bird’s wife, a woodpecker, and four squirrels move in. Since food is scarce after a bobcat and turtle settle, they refuse to let him travel to the far side of Lane Winabago. Pressure hits the poor moose after three mice, a fox, a bear, and 362 bees move in on his antlers. Suddenly hunters appear who, “must get his head for the Harvard club wall”. When Thidwick is trapped after an attempt to escape, he suddenly remembers that antler-shedding season has arrived. He bucks the antlers off, leaves the freeloaders at the mercy of the hunters, and swims to the other side of the lake to rejoin his herd. His horns, and the former ingrates, are stuffed and mounted. A bit of a nod to not biting the hand that feeds you. 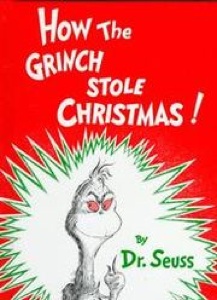 The Grinch, a bitter, cave-dwelling creature with a heart “two sizes too small,” lives on snowy Mount Crumpit, a steep, 10,000 foot high mountain just north of Whoville, home of the merry and warm-hearted Whos. His only companion is Max, his faithful but dim dog. From his perch, the Grinch can hear the noisy Christmas festivities that take place in Whoville. Envious of the Whos’ happiness, he makes plans to descend on the town and, by means of burglary, deprive them of their Christmas presents and decorations and thus “prevent Christmas from coming”. However, he learns in the end that despite his success in stealing all the Christmas presents and decorations from the Whos, Christmas comes just the same. He then realizes that Christmas is more than just gifts and presents in an abvious nod to commercialism versus the true meaning of the holiday. His heart grows three sizes larger, he returns all the presents and trimmings, and is warmly welcomed into the community of the Whos. 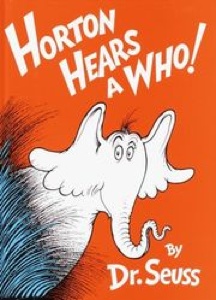 The book tells the story of Horton the Elephant who hears a small speck of dust talking to him. It turns out the speck of dust is actually a tiny planet, home to a city called “Who-ville”, inhabited by microscopic-sized inhabitants known as Whos.

The Whos ask Horton, despite the fact that he can only hear them, to protect them from harm, to which Horton happily obliges, proclaiming throughout the book that “a person’s a person, no matter how small”. In doing so he is ridiculed and nearly murdered by the other animals in the jungle for believing in something that they are unable to see or hear. 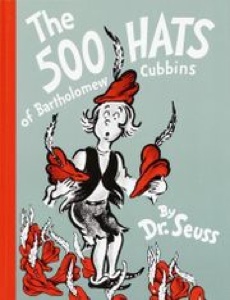 Unusually for a Seuss book, it is written in prose instead of rhyming and metered verse. Although an early and atypical work, 500 Hats includes many of Dr. Seuss’ critical themes, including a rejection of absolute authority, the innocence of children, fantastic occurrences, and differing perspectives of the main characters. The story overall expresses confidence, or lack there of, that leaders—even non-elected leaders—will do the right thing. 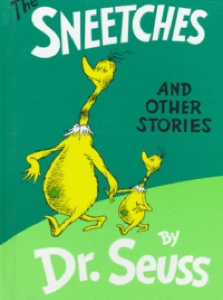 Sneetches are a race of odd, yellow creatures who live on a beach. Some Sneetches have a star on their bellies, and some do not. Sneetches who have stars on their bellies are part of the “in crowd”, while Sneetches without stars are shunned and consequently mopey. This is a definite allegory for discrimination. In the story, a “fix-it-up chappie” named Sylvester McMonkey McBean appears. He offers the Sneetches without stars a chance to acquire them by going through his Star-On machine, for three dollars. The old star-bellied Sneetches are furious until McBean tells them about his Star-Off machine, costing ten dollars. This escalates, with the Sneetches running from one machine to the next until no one is sure who is who. This continues until the Sneetches are penniless and McBean leaves a rich man. In the end, the Sneetches learn that neither plain-belly nor star-belly Sneetches are superior, and they are able to get along and become friends. 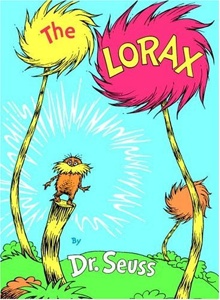 The tale chronicles the plight of the environment and the Lorax (a “mossy, bossy” man-like creature), who speaks for the trees against the greedy Once-ler. The book is commonly recognized as a fable concerning industrialized society, using the literary element of personification to give life to industry as the Once-ler (whose face is never shown in all of the story’s illustrations) and to the environment as the Lorax.