It is now just a matter of days before we see the opening ceremony of the Beijing Olympics in China, the Games of the XXIX Olympiad (or for those who don’t like Roman numerals, the Games of the 29th Olympiad.) This lends us the perfect opportunity to present a list of fascinating facts about the Ancient Olympics – held in Olympia, Greece. 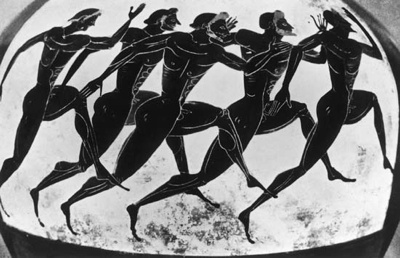 1. No one actually knows what the origins were of the very first games. One myth suggests that Heracles (the divine son of the god Zeus) ran a race in Olympia and decreed that it be repeated every four years.

2. The olympic games were one of two central rituals in Ancient Greece. The other was the Eleusinian Mysteries – initiation ceremonies for people joining the cult of Demeter and Persephone.

3. The Statue of Zeus – the father of the Gods and one of the Seven Ancient Wonders of the World, was housed in a temple at Olympia – the site of the Ancient Olympics.

4. An Olympiad (a period of 4 years which refers to the time between two games) was used as a measure of years by the Ancient Greeks in much the same way as we now use AD and BC. This idea was devised by the historian Ephorus. Previously, every Greek state used its own different method of time measurement which led to a great deal of confusion.

5. The only event at the first olympics was the Stadion race – a race of around 190 meters (measured after the feet of Zeus). The race was named after the building in which the race took place (the source of the English word “stadium”. The stadion race is pictured above.

6. Unlike the modern starting position, racers (of whom 20 would take place) started in a fully erect standing position with their arms stretched in front of them. If there was a tie, the race would be re-run.

7. The winner of the first recorded Olympic Games (the first gold medalist in a sense) was Coroebus of Elis – a baker from Eleia (the region in which Olympia was found). He won in 776 BC. Instead of winning a gold medal – as is now the norm – he received an olive branch – more a symbol than a prize. The town still exists today with around 150 citizens.

8. It is believed that the Greek tradition of athletic nudity started at the games in 720 BC, and it was most likely introduced by the Spartans or Megarian Orsippus. It is from this practice that we have our word “gymnasium” – derived from the Greek word “gymnos” meaning “naked”. Competing naked was meant as a tribute to the gods and to encourage aesthetic appreciation of the male body.

9. While the competitors were naked during the games, it is possible that some wore a kynodesme: a thin leather strip tied tightly around the part of the foreskin that extended beyond the glans (to prevent the glans from showing). It was then tied around the waist to expose the scrotum, or to the base of the penis making it appear to curl upwards. Not all athletes wore the kynodesme. Pictured above is an athlete wearing the kynodesme – the picture is attributed to Triptolemos (480 BC).

10. During the games, all of Greece was under a truce (ekecheiria) – there could be no use of capital punishment, and no wars or battles. This was in order to ensure the safety of competitors and spectators on the way to Olympia. While this was generally adhered to, at least one account exists of a possible breach by the Spartan army, which resulted in a large fine and a ban from attending the games that year. 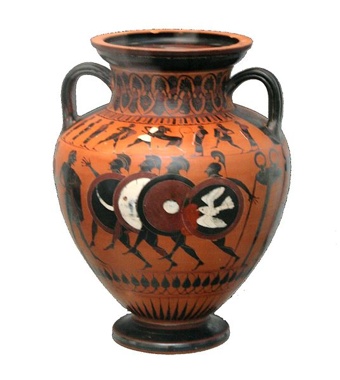 11. The Olympic Games were part of 4 games – held in order so that there would be one set of games each year. The other three were the Pythian, Nemean, and Isthmian Games, but the Olympic games were the most important.

12. Although the first games were “international” in a sense (in that all Greek City States were allowed to enter), only men who spoke Greek could compete. Eventually members of the Greek colonies were also able to enter.

13. The last running race added to the Ancient Games (after the addition of two longer distance races) was the hoplitodromos – in which competitors would run 400 or 800 yards in full armor with shields and a helmet or greaves (leg armor). This was introduced in 520 BC. Runners would often trip over each other or stumble on shields dropped by other competitors. In the image above we see athletes competing in the hoplitodromos – in far more an orderly fashion than was likely.

14. In its heyday, the games lasted 5 days. The first three were for the sporting events, with the other two days being used for rituals and celebration. On the final day, all participants attended a feast in which 100 oxen (killed on the first day as a sacrifice to Zeus) were eaten. Certainly very different from the secular opening ceremony we will see this week, or, in fact, all olympic opening ceremonies from modern times.

15. As part of the move to making Christianity the official religion, the ancient Olympic Games were finally suppressed by either Theodosius I in AD 393 or his grandson Theodosius II in AD 435. They would not return until 1896. They were held in Athens, Greece.