The type of music known as “The Blues”, was first recorded in 1920 by Mamie Smith (“Crazy blues”), but its prerecorded origins is something of a mystery. Although some West African and European similarities and influences have been said to exist,the blues is mostly an American phenomenon, if not entirely.

It was passed along by the oral and song tradition. This all changed with the advent of locomotion, big cities, the Victrola and the jukebox, and the record companies putting out “race records” in 1923. The blues is like a family recipe with spices and ingredients plucked from many different places. It’s a magnificent form, molded from amalgamated parts, containing the secular and sacred.

Not a whole lot is known about a number of the gentlemen on this list. With some, just one picture is all we have to see how they appeared for THAT moment in time. Some others here didn’t so much sing and play the blues, as preach the gospel, but they have been included by many musicologists as being within the blues lexicon nonetheless. What remains most importantly, is the voice, the music, and the heart and soul that crackles through the ages unbound.

Reynold’s real name was Joe Sheppard. He was blinded by a shotgun blast to the face in Louisiana in the mid to late 1920s, which resulted in the physical loss of his eyes. Despite this handicap, “Blind Joe” became known for his distinctive bottleneck style as well as his reported accuracy with a pistol, with which it is said he could judge the position of a target by sound alone. Reynolds is known to have been polyamorous, as is apparent from a number of his recordings. He was also known to be outspoken and flamboyant, often using his music as a medium to attack society. He only cut records between 1929 and 1930. Even in the digital age, his music is hard to come by. When listening to the video clip above, close your eyes – the images are not related to the recording. 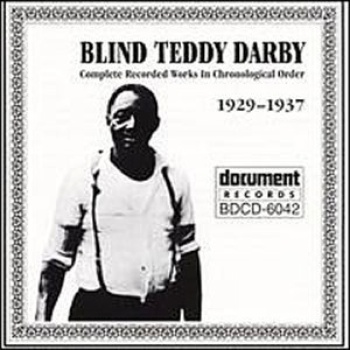 Full name: Theodore Roosevelt Darby. Darby was from Kentucky and settled in St. Louis. He recorded for Paramount, Victor, Bluebird, Vocation and Decca between 1929-37. Darby became blind at the age of twenty from glaucoma (an increase of pressure within the eye). He spent time for bootlegging and recorded a song, “Bootleggin’ Ain’t Good No More”. Later in life, he became a minister. 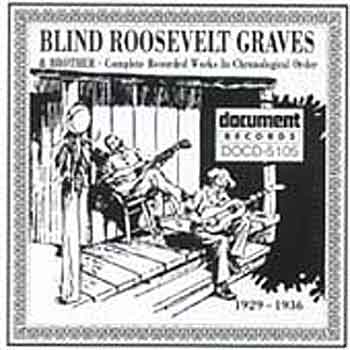 Graves was born in Mississippi. He recorded for Paramount and American Records in 1929 and 36 with his brother Uaroy and band, “The Mississippi Jook Band”. Nothing else of his work is known to exist after the 1930s. He is said to be an early forerunner to rock and roll.

Real name: Saunders Terrell. After a couple of farming accidents, Terry was blinded for life at the age of 16. A harmonica was his singing voice. The sound of whoops and hollers through his harp are immediately recognizable as his own. He is known for his collaboration with Brownie McGhee (his music partner for almost forty years) and for his contribution to the blues/folk revival of the 50s – 60s. Terry played with the greats: Blind Boy Fuller, Lightnin’ Hopkins, Woody Guthrie, Rev. Gary Davis, and Leadbelly.

“My grandmother said I taken blind when I was three weeks old. The doctor had something put in my eyes that was too strong and that was what caused me to go blind.” Davis was a marvelous 12 string guitar player with a commanding voice. He began in the blues and was later ordained as a minister and sang only the gospel. He stopped recording in the 30s, only to re-emerge during the 50s – 60s folk fervor in New York. His finger picking style and strong vocal delivery, underlined with a touch of sorrow, make tunes like “Death Don’t Have No Mercy” unforgettable.

Real name: Fulton Allen. A street musician staple of Durham, NC in the 30’s, Fuller “learned” the blues through the records of Blind Blake and Rev. Gary Davis. His ragtime Piedmont style hops and pops and sways with an uplifting beat and he sings with assurance and clarity. He even scats at times too, mimicking his melodious flow. According to Wikipedia, the Piedmont style is a,”finger picking method on the guitar in which a regular, alternating-thumb bass string pattern supports a syncopated melody using the treble strings”.

The Piedmont blues typically refers to a greater area than the Piedmont plateau, which mainly refers to the East Coast of the United States from about Richmond, Virginia to Atlanta, Georgia. What is important is the time in which these guys were playing (during the 20s and 30s) – the height of this style.

When Johnson was a child, lye was accidentally thrown in his face by his stepmother (who was fighting with his father). Johnston became a sidewalk singing evangelist in Texas as an adult. He had an amazing guttural buzz of a singing voice and a driving and, at times, sublime guitar sound. Using a pocketknife instead of a bottleneck, slide guitar was his forte and is considered one of the best examples of this style. His song, “Dark Was The Night, Cold Was The Ground” was shot into space in 1977, via Voyager 1.

“Doogie” played a fast and clean 12-string guitar of the Piedmont blues. He got around on his own using echo location, by way of tongue clicks and through cognitive mapping. He had a way of making his instrument talk and mimic and bellow, as if another entity were adding its touch by punctuating the story. His personality comes across strong in all of his recordings. 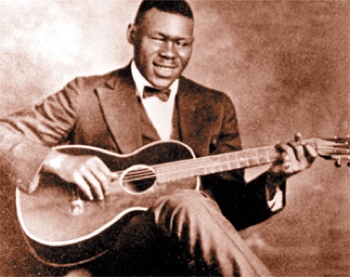 Recommended: His complete recordings, or Best of Blind Blake

Real name: Arthur Blake or possibly Arthur Phelps. Blind Blake was known for his accomplished Piedmont blues style guitar playing, which combined ragtime, jazz, and elements of vaudeville show tunes. Blake recorded extensively with the Paramount Label, cutting 81 solo sides, practically a disc a month between 1926 to 1932. He then disappeared. His date of death (like his birth) is uncertain. Rev. Gary Davis said he was run over by a street car in NYC and others said murder or alcohol did him in.

Jefferson was given the title, “The Father of the Texas Blues”. He was born blind and the youngest of seven children. A true traveling songster. He inspired an eight year old Lightnin’ Hopkins to play the blues and in 1917, while living in Dallas, Texas, he met Leadbelly, who would later rise to fame in the blues and folk music fame, as “the King of the 12 string Guitar”.

Jefferson had an outstanding “one of a kind” voice, with a complex melody chord structure that was plucked and strummed out through his guitar, lending to a different sound of blues. He cut 90 songs in four years. Next to Blind Blake, Jefferson was one of Paramount’s most successful recorded blues musicians. He died before he reached the age of forty.

Top 10 Synthwave Albums Of All Time