The credit crunch is hitting hard – so why not take some time out to enjoy a bit of a laugh at the expense of all of those people who caused it! This is a selection of humorous jokes relating to finance and specifically the credit crunch. Please feel free to contribute your own in the comments – but remember: keep it clean! 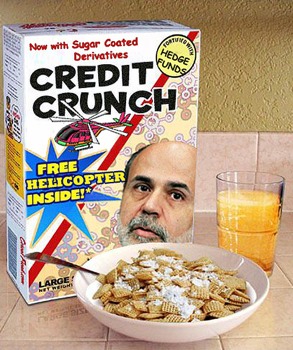 Q: With the current market turmoil, what’s the easiest way to make a small fortune?
A: Start off with a large one.

Q: What’s the difference between an investment banker and a large pizza?
A: A large pizza can feed a family of four.

A rich, dying man, laid on his deathbed, requested to be joined at his bedside by his vicar, his bank manager and his lawyer.

He instructed them that he wished to be buried, when he finally passed away, along with all his money. He gave each of them fifty thousand pounds and asked them to throw the money on top of his coffin, in the burial plot, when he died.

A couple of days later the old man passed away and was buried within the week. At the wake, the three men were chatting and the vicar was suddenly overcome with guilt. He confessed to the other two that he had only thrown only half of the money onto the coffin, as the church needed urgent repairs to the roof. The bank manager thought, ‘What the heck if we are having a confession,’ and told the other two men that he had also only thrown half the money in, as the ‘Credit Crunch’ was hitting hard and he needed some money for the bank to stop it going bust. The lawyer jumped up and said to the other two, ‘I think that is a shameful act on both of you. I threw a cheque in for the full amount!”

Q: What’s the definition of optimism?
A: An Investment Banker ironing five shirts on a Sunday evening. 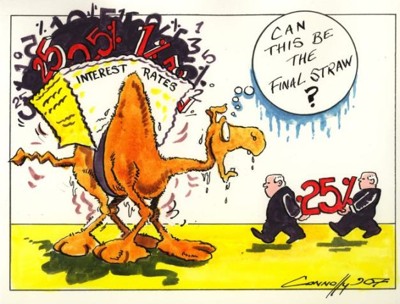 I went to the ATM this morning and it said “insufficient funds”.

I’m wondering is it them or me.

The credit crunch is getting bad isn’t it? I mean, I let my brother borrow $10 a couple of weeks back, it turns out I’m now America’s third biggest lender.

Talked to my bank manager the other day and he said he was going to concentrate on the big issues from now on.

He sold me one outside KFC yesterday.

[NOTE: The big issue is a UK magazine sold by homeless people to make some money]

Resolving to surprise her husband, an investment banker’s wife pops by his office. She finds him in an unorthodox position, with his secretary sitting in his lap. Without hesitation, he starts dictating, “…and in conclusion, gentlemen, credit crunch or no credit crunch, I cannot continue to operate this office with just one chair!”

Q: What’s the difference between Investment Bankers and London Pigeons?
A: The Pigeons are still capable of making deposits on new BMW’s. Q: What have Icelandic banks and an Icelandic streaker got in common?
A: They both have frozen assets.

Quote of the day (from a trader): “This is worse than a divorce. I’ve lost half my net worth and I still have a wife.”

Q: How do you successfully freeze your financial assets?
A: Invest in an Icelandic bank

A lobbyist on his way home from Parliament is stuck in traffic. Noticing a police officer, he winds down his window and asks: ‘What’s the hold-up?’ The policeman replies: ‘The Prime Minister is so depressed he’s stopped his motorcade and is threatening to douse himself with petrol and set himself on fire. He says no one believes he can get us through the credit crunch. So we’re taking up a collection for him.’ The lobbyist asks: ‘How much have you got so far?’ The officer replies: ‘About 40 gallons, but a lot of people are still siphoning.’

You know it’s a credit crunch when…

1. The cashpoint asks if you can spare any change.
2. There’s a ‘buy one, get one free’ offer – on banks.
3. The IRS is offering a 25 per cent discount for cash-payers.
4. UK Prime minister Gordon Brown has stopped chewing his nails and started sucking his thumb.
5. Your builder asks to be paid in Zimbabwean dollars rather than US dollars. 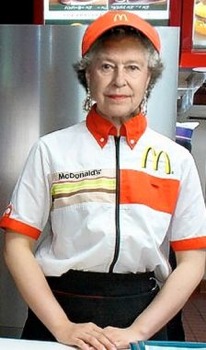 Uncertainty has now hit Japan. In the last seven days, Origami bank has folded, Sumo Bank has gone belly up and Bonsai Bank has announced plans to cut some of its branches. Yesterday, it was also announced that Karaoke Bank will go up for sale and will likely go for a song, while shares in Kamikaze Bank were suspended today after they nose-dived. While Samurai Bank is soldiering on after sharp cutbacks, 500 staff at Karate Bank got the chop and analysts report that there is something fishy going on at Sushi Bank, where it is feared that staff may get a raw deal.

Why have real estate agents stopped looking out of the window in the morning? Because otherwise they’d have nothing to do in the afternoon.

Q: What’s the difference between an American and a Zimbabwean?
A: In a few weeks, nothing.

Q: George Bush was asked today “what did he think of the Credit Crunch?”
A: He replied: “It was his favorite Candy Bar.”

Jokes sourced from: BBC News, Sickipedia, and The Daily Mail