Through history, as natural selection played its part in the development of modern man, many of the useful functions and parts of the human body become unnecessary. What is most fascinating is that many of these parts of the body still remain in some form so we can see the progress of evolution. This list covers the ten most significant evolutionary changes that have taken place – leaving signs behind them. 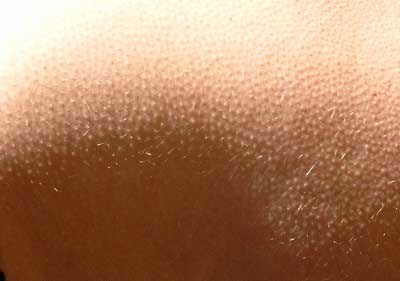 Humans get goose bumps when they are cold, frightened, angry, or in awe. Many other creatures get goose bumps for the same reason, for example this is why a cat or dog’s hair stands on end and the cause behind a porcupine’s quills raising. In cold situations, the rising hair traps air between the hairs and skin, creating insulation and warmth. In response to fear, goose bumps make an animal appear larger – hopefully scaring away the enemy. Humans no longer benefit from goose bumps and they are simply left over from our past when we were not clothed and needed to scare our own natural enemies. Natural selection removed the thick hair but left behind the mechanism for controlling it.

Dig into the incredible science of evolution with The Greatest Show on Earth: The Evidence for Evolution at Amazon.com! 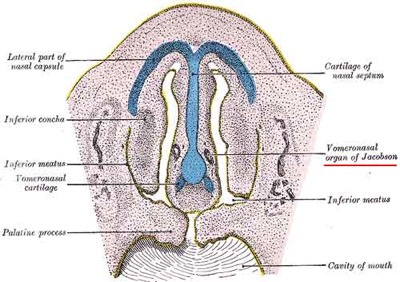 Jacobson’s organ is a fascinating part of animal anatomy and it tells us a lot about our own sexual history. The organ is in the nose and it is a special “smell” organ which detects pheromones (the chemical that triggers sexual desire, alarm, or information about food trails). It is this organ that allows some animals to track others for sex and to know of potential dangers. Humans are born with the Jacobson’s organ, but in early development its abilities dwindle to a point that it is useless. Once upon a time, humans would have used this organ to locate mates when communication was not possible. Single’s evenings, chat rooms, and bars have now taken its place in the process of human mate-seeking. 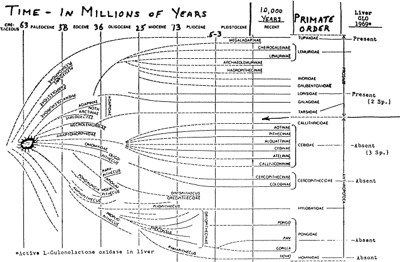 While many of the hangovers from our “devolved” past are visible or physical, this is not true for all. Humans have structures in their genetic make-up that were once used to produces enzymes to process vitamin C (it is called L-gulonolactone oxidase). Most other animals have this functioning DNA but at some point in our history, a mutation disbled the gene – whilst leaving behind its remnants as junk DNA. This particular junk DNA indicates a common ancestry with other species on earth, so it is particularly interesting. 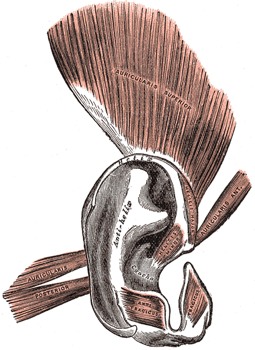 Also known as the extrinsic ear muscles, the auriculares muscles are used by animals to swivel and manipulate their ears (independently of their head) in order to focus their hearing on particular sounds. Humans still have the muscles that we would once have used for the very same reason – but our muscles are now so feeble that all they can do is give our ears a little wiggle. The use of these muscles in cats is very visible (as they can nearly turn their ears completely backwards) – particularly when they are stalking a bird and need to make the smallest movements possible so as to not frighten its future meal. 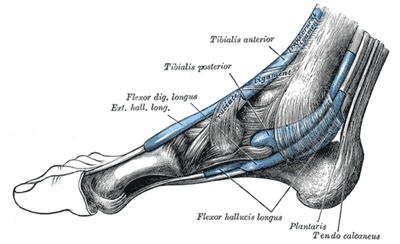 The plantaris muscle is used by animals in gripping and manipulating objects with their feet – something you see with apes who seem to be able to use their feet as well as their hands. Humans have this muscle as well, but it is now so underdeveloped that it is often taken out by doctors when they need tissue for reconstruction in other parts of the body. The muscle is so unimportant to the human body that 9% of humans are now born without it. 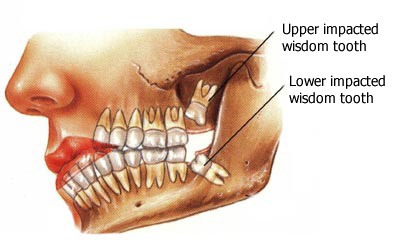 Early humans ate a lot of plants – and they needed to eat them quickly enough that they could eat a sufficient amount in one day to get all of the nutrients they needed. For this reason, we had an extra set of molars to make the larger mouth more productive. This was particularly essential as the body lacked the ability to sufficiently digest cellulose. As evolution made its selections, our diets changed, our jaws grew appropriately smaller, and our third molars became unnecessary. Some human populations have now all but completely stopped growing wisdom teeth, while others have almost 100% likelihood of developing them.

Life can get pretty deep. Turn off your brain for awhile and enjoy the 2001 film Evolution at Amazon.com! 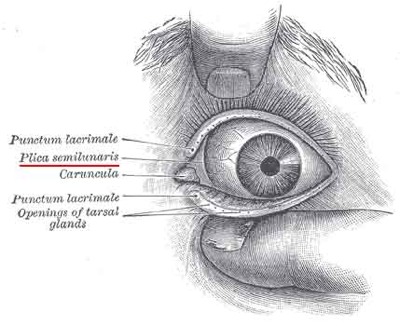 If you watch a cat blink, you will see a white membrane cross its eye – that is called its third eyelid. It is quite a rare thing in mammals, but common in birds, reptiles, and fish. Humans have a remnant (but non-working) third eyelid (you can see it in the picture above). It has become quite small in humans, but some populations have more visible portions than others. There is only one known species of primate that still has a functioning third eyelid, and that is the Calabar angwantibo (closely related to lorises) which lives in West Africa. 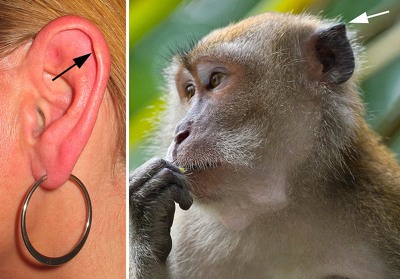 Darwin’s point is found in the majority of mammals, and humans are no exception. It is most likely used to help focus sounds in animals, but it no longer has a function in humans. Only 10.4% of the human population still has this visible left-over mark of our past, but it is possible that a much larger number of people carry the gene that produces it as it does not always cause the ear tubercle to appear. The point (shown in the picture above) is a small thick nodule at the junction of the upper and middle sections of the ear. 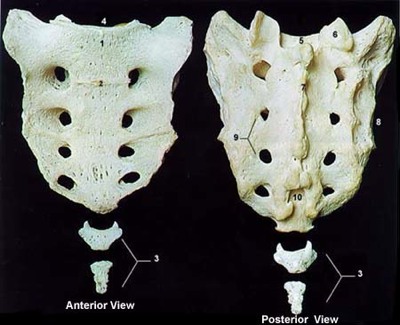 The coccyx is the remnant of what was once a human tail. Over time we lost the need for a tail (as tree swinging was replaced by hanging out at the local water hole grunting neanderthal gossip), but we did not lose the need for the coccyx: it now functions as a support structure for various muscles and a support for a person when he sits down and leans back. The coccyx also supports the position of the anus. 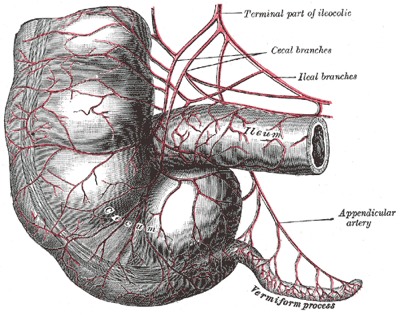 The appendix has no known use in modern humans and is often removed when it becomes infected. While its original use is still speculated on, most scientists agree with Darwin’s suggestion that it once helped to process the cellulose found in the leaf-rich diet that we once had. Over the course of evolution, as our diet has changed, the appendix became less useful. What is particularly interesting is that many evolutionary theorists believe that natural selection (while removing all of the abilities of the appendix) selects larger appendices because they are less likely to become inflamed and diseased. So unlike the little toe, which may eventually vanish and is equally useless, the appendix is likely to stay with us for a long time – just hanging around doing nothing.