Fairy tales of the past were often full of macabre and gruesome twists and endings. These days, companies like Disney have sanitized them for a modern audience that is clearly deemed unable to cope, so we see happy endings everywhere.

This list looks at some of the common endings we are familiar with—and explains the original gruesome origins. 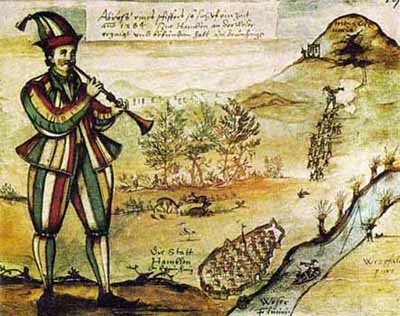 In the tale of the Pied Piper, we have a village overrun with rats. A man arrives dressed in clothes of pied (a patchwork of colors) and offers to rid the town of the vermin. The villagers agree to pay a vast sum of money if the piper can do it—and he does. He plays music on his pipe, which draws all the rats out of the town. When he returns for payment, the villagers won’t cough up, so the Pied Piper decides to rid the town of children too! In most modern variants, the piper draws the children to a cave out of the town, and when the townsfolk finally agree to pay up, he sends them back. In the darker original, the piper leads the children to a river where they all drown (except a lame boy who couldn’t keep up). Some modern scholars say that there are connotations of pedophilia in this fairy tale.

Read the disturbing origins of hundreds of fairy tales with the original masters. Buy the Kindle edition of Grimm’s Fairy Tales: Complete Edition & Over 200 Fairy Tales for only $0.99 at Amazon.com! 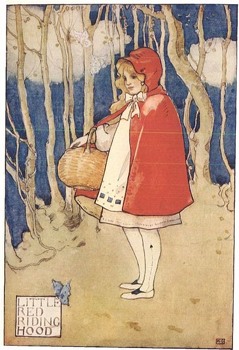 The version of this tale that most of us are familiar with ends with Red Riding Hood being saved by the woodsman who kills the wicked wolf. But in fact, the original French version (by Charles Perrault) of the tale was not quite so nice. In this version, the little girl is a well-bred young lady who is given false instructions by the wolf when she asks the way to her grandmother’s house. Foolishly, Red Riding Hood takes the advice of the wolf and ends up being eaten. And here the story ends. There is no woodsman and no grandmother—just a fat wolf and a dead Red Riding Hood. The moral of this story is not to take advice from strangers. 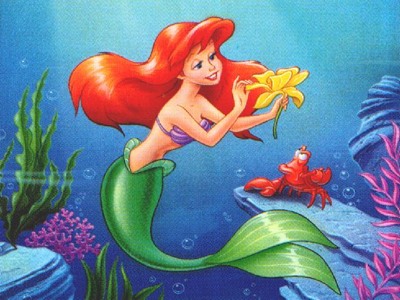 The 1989 version of the Little Mermaid might be better known as “The big whopper!” In the Disney version, the film ends with Ariel, the mermaid, being changed into a human so she can marry Eric. They marry in a wonderful wedding attended by humans and merpeople. But, in the very first version by Hans Christian Andersen, the mermaid sees the Prince marry a princess, and she despairs. She is offered a knife to stab the prince to death, but rather than do that, she jumps into the sea and dies by turning to froth. Hans Christian Andersen modified the ending slightly to make it more pleasant. In his new ending, instead of dying when turned to froth, she becomes a “daughter of the air” waiting to go to heaven. So, frankly, she is still dead for all intents and purposes. 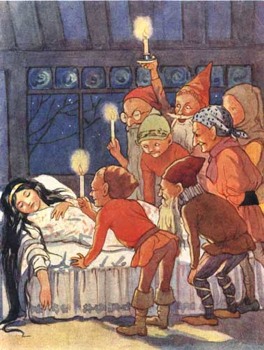 In the tale of Snow White that we are all familiar with, the Queen asks a huntsman to kill her and bring her heart back as proof. Instead, the huntsman can’t bring himself to do it and returns with the heart of a boar. Now, fortunately, Disney hasn’t done too much damage to this tale. Still, they did leave out one important original element: in the original tale, the Queen actually asks for Snow White’s liver and lungs—which are to be served for dinner that night! Also, in the original, Snow White wakes up when the prince’s horse jostles her as he carries her back to his castle—not from a magical kiss. What the prince wanted to do with a dead girl’s body I will leave to your imagination. Oh, in the Grimm version, the tale ends with the Queen being forced to dance to death in red hot iron shoes!

Watch all of these classic Disney movies and thousands more titles with a FREE trial of Amazon Prime at Amazon.com! 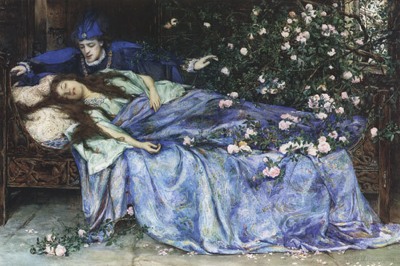 In the original Sleeping Beauty, the lovely princess is put to sleep when she pricks her finger on a spindle. She sleeps for one hundred years when a prince finally arrives, kisses her, and awakens her. They fall in love, marry, and (surprise surprise) live happily ever after. But alas, the original tale is not so sweet (in fact, you have to read this to believe it). In the original, the young woman is put to sleep because of a prophecy rather than a curse. And it isn’t the kiss of a prince which wakes her up: the king, seeing her asleep and rather fancying having a bit, rapes her. After nine months, she gives birth to two children (while she is still asleep). One of the children sucks her finger, which removes the piece of flax that was keeping her asleep. She wakes up to find herself raped and the mother of two kids. 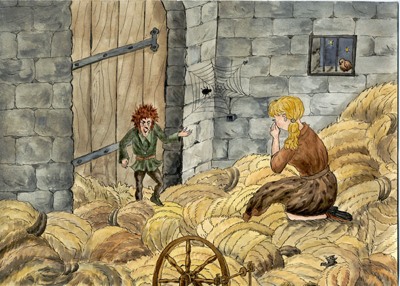 This fairy tale is a little different from the others because rather than sanitizing the original, it was modified by the original author to make it more gruesome. In the original tale, Rumpelstiltskin spins straw into gold for a young girl who faces death unless she can perform the feat. In return, he asks for her firstborn child. She agrees, but when the day comes to hand over the kid, she can’t do it. Rumpelstiltskin tells her that he will let her out of the bargain if she can guess his name. She overhears him singing his name by a fire, so she guesses it correctly. Rumpelstiltskin, furious, runs away, never to be seen again. But in the updated version, things are a little messier. Rumpelstiltskin is so angry that he drives his right foot deep into the ground. He then grabs his left leg and rips himself in half. Needless to say, this kills him.

4 Goldilocks and the Three Bears

In this heartwarming tale, we hear of pretty little Goldilocks who finds the house of the three bears. She sneaks inside and eats their food, sits in their chairs, and finally falls asleep on the bed of the littlest bear. When the bears return home, they find her asleep. She awakens and escapes out the window in terror. The original tale (which actually only dates to 1837) has two possible variations. In the first, the bears find Goldilocks and rip her apart and eat her. In the second, Goldilocks is actually an old hag who (like the sanitized version) jumps out of a window when the bears wake her up. The story ends by telling us that she either broke her neck in the fall or was arrested for vagrancy and sent to the “House of Correction.” 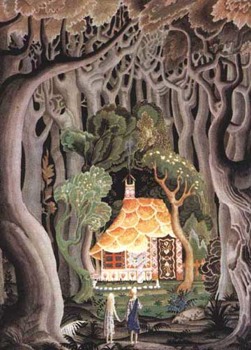 In the widely known version of Hansel and Gretel, we hear of two little children who become lost in the forest, eventually finding their way to a gingerbread house that belongs to a wicked witch. The children end up enslaved for a time as the witch prepares them for eating. They figure their way out and throw the witch in a fire and escape. In an earlier French version of this tale (called The Lost Children), instead of a witch, we have a devil. Now the wicked old devil is tricked by the children (in much the same way as Hansel and Gretel), but he works it out and puts together a sawhorse to put one of the children on to bleed (that isn’t an error – he really does). The children pretend not to know how to get on the sawhorse, so the devil’s wife demonstrates. While she is lying down, the kids slash her throat and escape. 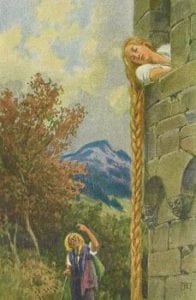 This German tale has become the subject of much fascination (and parody) over the years, with the idiom ‘Rapunzel, Rapunzel, let down your hair’ becoming all too memorable. In the Grimm version, the happy couple, however, had to endure many more trials and tribulations than is initially apparent, for they were only reunited after Rapunzel had been cast out, pregnant and alone, into the wilderness by the irate witch, while the prince was blinded after falling from the tower and into the thorny brambles below.

An even older version was written in 1600 by an Italian writer named Giambattista Basile. In this version, Rapunzel is sold to an ogre when she was a baby—all because her mother stole some parsley from a garden. She was forced to give away her first-born child, and she was locked in a tower her entire life. This may sound familiar to fans of the Broadway musical Into the Woods. However, the original true story that inspired all of these versions of the fairy tale is the darkest one of all. Instead of an evil witch locking a beautiful girl in a tower, the captor was the girl’s own father, who was so controlling over his daughter’s life that it lead to her death. 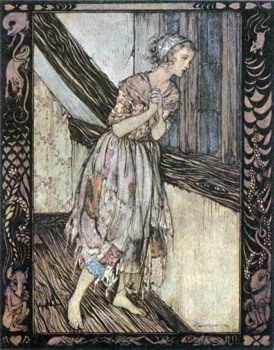 In the modern Cinderella fairy tale, we have the beautiful Cinderella swept off her feet by the prince and her wicked stepsisters marrying two lords—with everyone living happily ever after. The fairy tale has its origins way back in the 1st century BC, where Strabo’s heroine was actually called Rhodopis, not Cinderella. The story was very similar to the modern one, except for the glass slippers and pumpkin coach. But lurking behind the pretty tale is a more sinister variation by the Grimm brothers: in this version, the nasty step-sisters cut off parts of their own feet to fit them into the glass slipper—hoping to fool the prince. The prince is alerted to the trickery by two pigeons who peck out the step-sister’s eyes. They end up spending the rest of their lives as blind beggars while Cinderella gets to lounge about in luxury at the prince’s castle.