The Middle Ages spanned roughly from the 5th century to the 16th century – a total of 1,100 years. During the time following the Middle Ages (which is often referred to as the Enlightenment), the previous millennium was criticized and condemned – just as we now condemn the actions of some during the Victorian Period (sexual prudishness for example). Many of the writers of the newly invented Protestant movement harshly attacked the Middle Ages because of its Catholicity. Unfortunately many of the myths and misconceptions that sprung up at the time are still believed today. This list aims to set things straight. 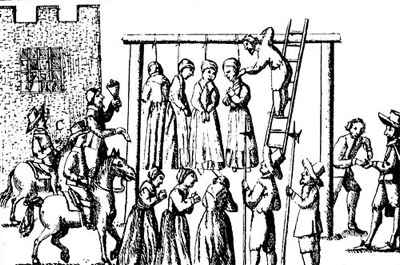 Myth: The death penalty was common in the Middle Ages

Despite what many people believe, the Middle Ages gave birth to the jury system and trials were in fact very fair. The death penalty was considered to be extremely severe and was used only in the worst cases of crimes like murder, treason, and arson. It was not until the Middle Ages began to draw to a close that people like Elizabeth I began to use the death penalty as a means to rid their nations of religious opponents. Public beheadings were not as we see in the movies – they were given only to the rich, and were usually not performed in public. The most common method of execution was hanging – and burning was extremely rare (and usually performed after the criminal had been hanged to death first). 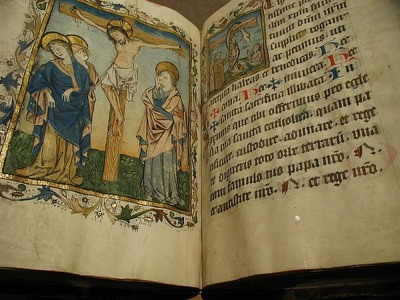 Myth: Bibles were locked away to keep the people from seeing the “true word”

During the Middle Ages (until Gutenberg came along) all books had to be written by hand. This was a painstaking task which took many months – particularly with a book as large as the Bible. The job of hand-printing books was left to monks tucked away in monasteries. These books were incredibly valuable and they were needed in every Church as the Bible was read aloud at Mass every day. In order to protect these valuable books, they would be locked away. There was no conspiracy to keep the Bible from the people – the locks meant that the Church could guarantee that the people could hear the Bible (many wouldn’t have been able to read) every day. And just to show that it wasn’t just the Catholic Church that locked up the Bibles for safety, the most famous “chained bible” is the “Great Bible” which Henry VIII had created and ordered to be read in the protestant churches. You can read more about that here. The Catholic diocese of Lincoln makes a comment on the practice here. 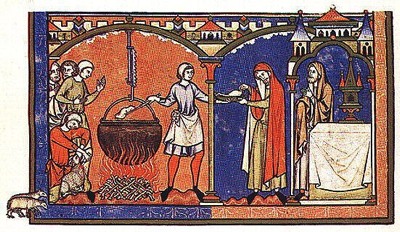 Myth: The poor were kept in a state of near starvation

This is completely false. Peasants (those who worked in manual work) would have had fresh porridge and bread daily – with beer to drink. In addition, each day would have an assortment of dried or cured meats, cheeses, and fruits and vegetables from their area. Poultry, chicken, ducks, pigeons, and geese were not uncommon on the peasants dinner table. Some peasants also liked to keep bees, to provide honey for their tables. Given the choice between McDonalds and Medieval peasant food, I suspect the peasant food would be more nutritious and tasty. The rich of the time had a great choice of meats – such as cattle, and sheep. They would eat more courses for each meal than the poor, and would probably have had a number of spiced dishes – something the poor could not afford. Wikipedia has an interesting article here which describes the mostly vegetable and grain diet of the peasants in the early Middle Ages, leading to more meat in the later period. 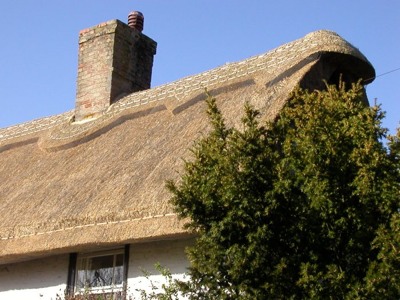 Myth: Peasants had thatched roofs with animals living in them

First of all, the thatched roofs of Medieval dwellings were woven into a tight mat – they were not just bundles of straw and sticks thrown on top of the house. Animals would not easily have been able to get inside the roof – and considering how concerned the average Middle Ager was, if an animal did get inside, they would be promptly removed – just as we remove birds or other small creatures that enter our homes today. And for the record, thatched roofs were not just for the poor – many castles and grander homes had them as well – because they worked so well. There are many homes in English villages today that still have thatched roofs. 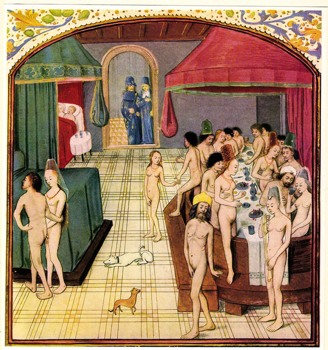 Not only is this a total myth, it is so widely believed that it has given rise to a whole other series of myths, such as the false belief that Church incense was designed to hide the stink of so many people in one place. In fact, the incense was part of the Church’s rituals due to its history coming from the Jewish religion which also used incense in its sacrifices. This myth has also lead to the strange idea that people usually married in May or June because they didn’t stink so badly – having had their yearly bath. It is, of course, utter rubbish. People married in those months because marriage was not allowed during Lent (the season of penance). So, back to smelly people. In the Middle Ages, most towns had bathhouses – in fact, cleanliness and hygiene was very highly regarded – so much so that bathing was incorporated into various ceremonies such as those surrounding knighthood. Some people bathed daily, others less regularly – but most people bathed. Furthermore, they used hot water – they just had to heat it up themselves, unlike us with our modern plumbed hot water. The French put it best in the following Latin statement: Venari, ludere, lavari, bibere; Hoc est vivere! (To hunt, to play, to wash, to drink, – This is to live!) 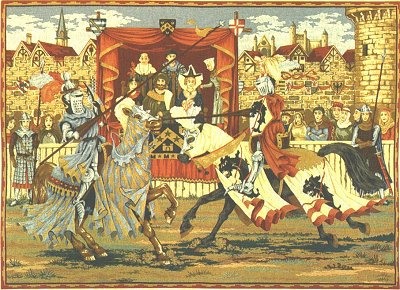 Myth: Peasants lived a life of drudgery and back-breaking work

In fact, while peasants in the Middle Ages did work hard (tilling the fields was the only way to ensure you could eat), they had regular festivals (religious and secular) which involved dancing, drinking, games, and tournaments. Many of the games from the time are still played today: chess, checkers, dice, blind man’s bluff, and many more. It may not seem as fun as the latest game for the Wii, but it was a great opportunity to enjoy the especially warm weather that was caused by the Medieval Warming Period. 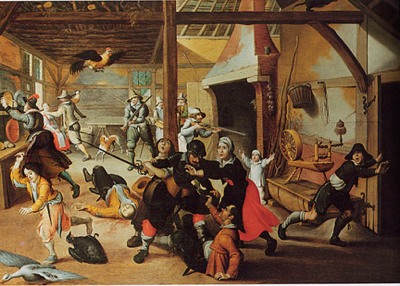 Myth: The Middle Ages were a time of great violence

While there was violence in the Middle Ages (just as there had always been), there were no equals to our modern Stalin, Hitler, and Mao. Most people lived their lives without experiencing violence. The Inquisition was not the violent bloodlust that many movies and books have claimed it to be, and most modern historians now admit this readily. Modern times have seen genocide, mass murder, and serial killing – something virtually unheard of before the “enlightenment”. In fact, there are really only two serial killers of note from the Middle Ages: Elizabeth Bathory, and Gilles de Rais. For those who dispute the fact that the Inquisition resulted in very few deaths, Wikipedia has the statistics here showing that there were (at most) 826 recorded executions over a 160 year period – from 45,000 trials! 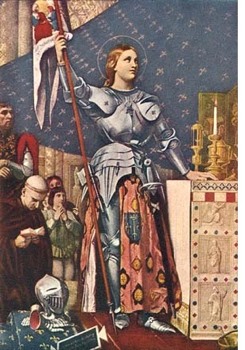 Myth: Women were oppressed in the Middle Ages

In the 1960s and 1970s, the idea that women were oppressed in the Middle Ages flourished. In fact, all we need to do is think of a few significant women from the period to see that that is not true at all: St Joan of Arc was a young woman who was given full control of the French army! Her downfall was political and would have occurred whether she were male or female. Hildegard von Bingen was a polymath in the Middle Ages who was held in such high esteem that Kings, Popes, and Lords all sought her advice. Her music and writing exists to this day. Elizabeth I ruled as a powerful queen in her own right, and many other nations had women leaders. Granted women did not work on Cathedrals but they certainly pulled their weight in the fields and villages. Furthermore, the rules of chivalry meant that women had to be treated with the greatest of dignity. The biggest difference between the concept of feminism in the Middle Ages and now is that in the Middle Ages it was believed that women were “equal in dignity, different in function” – now the concept has been modified to “equal in dignity and function”. 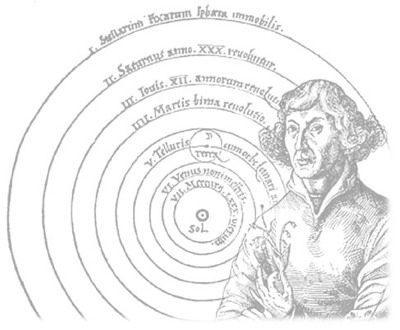 Myth: People in the Middle Ages believed the earth was flat

Furthermore, people did not believe the Earth was the center of the universe – the famous monk Copernicus dealt a death blow to that idea (without being punished) well before Galileo was tried for heresy for claiming that it proved the Bible was wrong. Two modern historians recently published a book in which they say: “there was scarcely a Christian scholar of the Middle Ages who did not acknowledge [Earth’s] sphericity and even know its approximate circumference.” 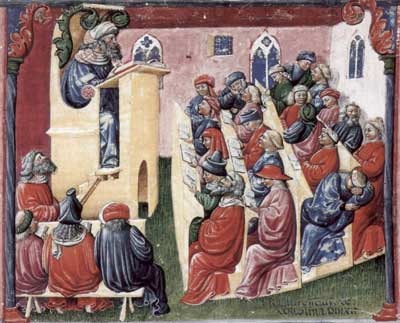 Myth: People of the Middle Ages were crude and ignorant

Thanks largely to Hollywood movies, many people believe that the Middle Ages were full of religious superstition and ignorance. But in fact, leading historians deny that there is any evidence of this. Science and philosophy blossomed at the time – partly due to the introduction of Universities all over Europe. The Middle ages produced some of the greatest art, music, and literature in all history. Boethius, Boccaccio, Dante, Petrarch, and Machiavelli are still revered today for their brilliant minds. The cathedrals and castles of Europe are still standing and contain some of the most beautiful artwork and stonework man has been able to create with his bare hands. Medicine at the time was primitive, but it was structured and willing to embrace new ideas when they arose (which is how we have modern medicine).