Few things are more gratifying to the creatively competitive than hoodwinking one’s fellow humans. Coupling a desire for fame with a mischievous streak can spell great entertainment for one person, and vast cultural adaptation for the rest of us.

Whenever a hoax is proven to be a hoax, not everyone listens. Some believers remain believers for the rest of their lives, no matter how unlikely their claims. The indellible cultural watermark created by hoaxing is exemplified in the ten most famous UFO hoaxes of the last few decades.

Shermer, the editor of Skeptic magazine, released a short video last year detailing his investigation of how easy it is to fake UFO photos. He had children ‘make’ UFOs using household materials, glue, and silver paint, then had the children photograph their creations hanging from fishing line against a backdrop of gray sky.

The pictures didn’t look tampered with to a professional photography analyst – he couldn’t see the fishing line, and the images were not smudged.

When Shermer showed the photos to the public at a sidewalk booth, some were skeptical, and some believed. When he showed them that the pictures were hoaxed, almost everyone seemed disappointed at the fact, and many claimed determinedly and defiantly to believe in UFOs nonetheless, as though accepting evidence would show personal weakness. 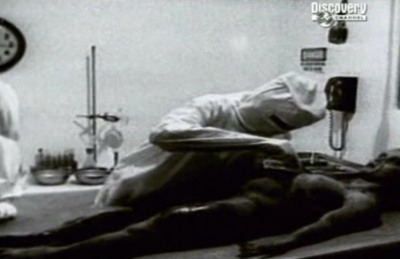 In the nineteen fifties and sixties came the American cultural trend not only of flying saucer sightings, but of reported meet-and-greets with their occupants. The mass hoax spread across the nation as people grappled for a stint in the spotlight. Some would dress up strangely, posing for photographs or gently harassing acquaintances. At least one man (named R. E. Harrison II), took photographs of an image on a television screen, claiming it to be an alien at the door!

A more scandalous, and gruesome, example of alien body hoaxery can be found in Ray Santilli’s black-and-white Alien Autopsy footage, in which a creepy-looking, hairless humanoid, with large eyes and a large head, is shown on a table, partially decomposed. The footage was released in the nineties, and received a great deal of attention. Santilli disappointed believers in 2006 by admitting the footage to be fake. At least he tried to let us all down easy – he claimed the footage not to be totally fake, exactly, but a reconstruction of an alien autopsy that did take place. Either way, the depicted creature wasn’t a real alien, and since Santilli didn’t admit this upon release, the footage can be considered a hoax. 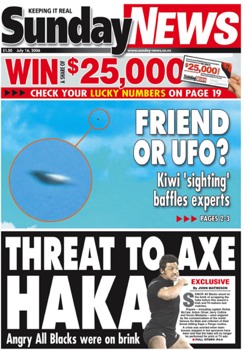 The most famous of these papers are The National Enquirer, The Globe, and the craziest of all: the Weekly World News. These magazines have hoaxed more hoaxes than any hoaxer should hope to hoax, and the redundancy is fully intended to help this point sink in. Fortunately for the levelheaded public, hardly anyone is roped in by scandals titled like these: “Alien Bible Translated,” “Russians Shoot Down UFO,” “Two-Ton Alien Hairball Found in Australia,” “Aliens stole my face,” “UFO Sparks Killer Forest Fire,” and “Japanese Woman to Wed Space Alien.”

Have aliens been using the moon as a garbage dump? Are they warring with a clan of bigfoots (bigfeet)? How exactly can exorcism affect UFOs? Who the heck is P’Lodd, and why is he fraternizing with the Clintons? Doubtless someone, somewhere, has been tricked into believing at least some of this crazy stuff. Thus, these tall-tale-telling-tabloids are officially hoaxers. Even if most of those who purchase tabloids do it for entertainment value alone, the magazines themselves stand by the alleged truth of their stories.

For Halloween in 1938, Orson Welles directed a radio play inspired by H. G. Wells’s ‘War of the Worlds,’ the classic story of violent alien invasion. The night it aired over the CBS radio network is one that many never forgot. It was an amazing performance – so amazing, in fact, that people took to the streets, fleeing their homes for their lives. The air of tension created by the second world war gets only some of the credit for the uproar, in which nearly two million people were convinced that ‘War of the Worlds’ was a news broadcast, rather than a work of fiction.

Although this example of human gullibility almost doesn’t count as a hoax – after all, the station did warn repeatedly that the story was fictional, it’s just that people missed it while channel-surfing – the sheer immense number of fooled and panicked people makes its inclusion here necessary.

What can be more hoaxy than a cult? Cult leaders are known to be more charismatic than the average fellow, convincing followers to believe (and do) the extraordinary for no real good reason. Such an ability was demonstrated by Heaven’s Gate’s leader, the white-haired and eccentric-looking Marshall Applewhite, and his wife, Bonnie Nettles.

Known by followers as ‘Ti and Do,’ the pair convinced thirty-eight people to commit suicide simultaneously, so that their souls could hitch a ride in the an alien spaceship coasting behind the Hale Bopp comet as it came into Earth’s view. Needless to say, the comet-following UFO never existed – or at least, was never actually observed.

With the advent of easily accessible, high-quality 3D-rendering computer software, the general public has taken UFO fakery to a new level. UFO sightings, with convincingly detailed video evidence, have appeared to explode through Britain, the United States, and especially Haiti. The Haiti UFO footage, popular on youtube and said to have been filmed in August of 2007, depicts several close-up views of mechanized, lit saucers. A woman gasps as the crafts fly directly overhead and then into the distance between two palm trees.

It is upon closer inspection of the palm trees that the video is proven likely to be a hoax: every palm tree in the video is exactly the same. Not only were the spacecrafts created by 3D-rendering software, but the entire video, including the backdrop, foreground and awkward camera work, is fabricated. The creator of the video, known online as “Barzolff81,” has publicly stated that he used a program called “View 6 Infinite” to fabricate the footage for fun. 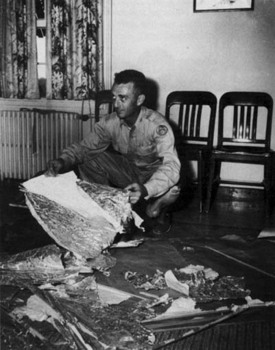 According to the United States government, a top-secret weather balloon crashed in Roswell, New Mexico, in July of 1947. Officials whisked away the materials after civilians discovered them, presenting them for news coverage later on. What was shown by the news was doubtless a weather balloon; however, eyewitnesses claimed that what crashed was something altogether different: an alien spacecraft.

Rumor has it that the spacecraft and its dead occupants were transported to Area 51, a top secret military base in Nevada, for storage and experimentation. The movie ‘Independence Day’ capitalized on this idea, as have many science fiction television shows and books.

The government would have reasons to keep all this quiet, and the Roswell tourist industry has reason to keep people believing. The complicated controversy surrounding this whole ordeal makes one thing clear: while we might not be able to surely say who, someone is definitely faking it. 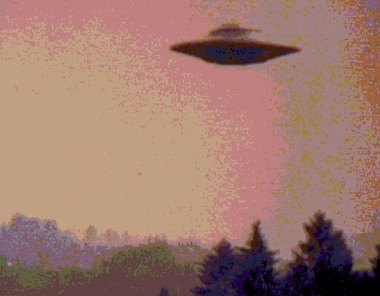 As the Roswell controversy hit the news, kid pranksters everywhere got hungry for a piece of the action. Armed with cameras, they hurled anything disk-like, from hubcaps to pie plates to saucers, into the sky, faking photos by the dozens. Through a camera lens, an old button on the ground can look like a crashed UFO. Some photos can’t be proven fake: the film is untampered with, and the graininess of the photos themselves prevents even the experts from obtaining definitive answers as to just what is depicted.

While Fox Mulder’s “I Want To Believe” poster is likely a picture of someone’s thrown hat, we’ll never be able to ‘know’ for sure. What we do know for sure, though, is that in the forties, a lot of kids stole mom’s good silver to aid in an afternoon’s mischief, and continue to occasionally do so today. The rest is a matter of likelihood. 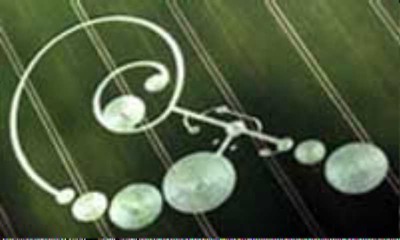 Urbanites and rural-dwellers alike are familiar with the crop circle, of English origin. A couple Englishmen took some planks, some rope, and some measurements to a field in 1975, and after a few separate tries, convinced the locals that something wholly unnatural was bending their crops into pretty shapes.

Without a human confession, it was only natural for curious folk to link the big, mysterious, and complex patterns with those big, mysterious, complex UFOs people claimed to see flitting about once in a while. By the time the original human circle makers admitted to their vandalism in 1996, hardly anyone listened. It didn’t matter if crop circles could be easily created with common tools, or that a few people showed exactly how it was done: enthusiasts were determined in their convictions, and continue, despite numerous debunkings, to believe that crop circles are of extraterrestrial origin, even today. 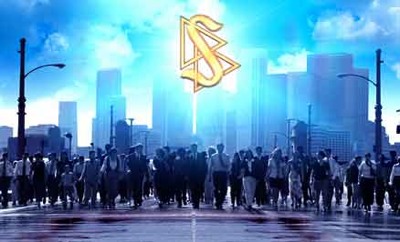 Scientology is the biggest alien fraud of them all. Using the pressuring technique of lie detection (via “e-meter”), the guided reliving of traumatic experiences, and the dangling carrot of the “next level,” L. Ron Hubbard, a famous but mediocre science fiction writer, schemed to take advantage of the bank accounts of the vulnerable by offering them spiritual salvation. Scientology’s followers call it a religion. Everyone else calls it a destructive, dangerous cult.

What does it have to do with aliens, though? Therein lies the cincher: once Scientology inductees have grown brainwashed and vulnerable enough to reach a high level of devotion (OT level 7), they are told of the story of Xenu, which was leaked to the public a few years ago. Many are familiar: Xenu was an intergalactic warlord who, billions of years ago, schemed to commit otherworldy genocide. An entire alien species was dumped into a volcano on Earth, and their ghosts were then shown ‘movies’ of suffering, war, and human religion. These ghosts became thetans, and thetans are what human souls are made of. They cause all human ills. They cling to our subconscious in their misery and confusion, transferring all their problems to us. Scientology, of course, seeks to solve the thetan problem.

Some say Scientologists have retired the story, but the fact remains that this Weekly-World-News-friendly tale was used for decades by the greedy to strengthen the devotion of weary followers. Scientology is now worth millions of dollars due in part to this back story, making it the most successful and fraudulent UFO hoax ever conducted.