Everyone loves an eccentric, so we are presenting here ten of the best. Most are British as they seem to be an endless source of eccentricity, but you will understand why when you read the list. Be sure to add your own favorite eccentrics to the comments.

“The amount of eccentricity in a society has generally been proportional to the amount of genius, mental vigour and moral courage it contained. [T]hat so few people now dare to be eccentric marks the chief danger of our time” — John Stuart Mill, 1859 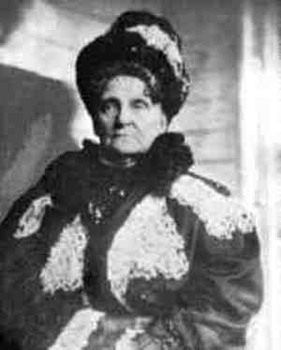 Hetty Green was an eccentric miser who became known as the “Witch of Wall Street”. With her business acumen she accumulated such wealth that she was the richest woman in the world. In order to save money, Hetty would work out of trunks at her local bank so she wouldn’t have to pay rent. When her son fell ill, she disguised herself and took him to a charity hospital; when they realized who she was, she fled claiming she would cure her son herself. Unfortunately he contracted gangrene and had to have his leg amputated. She always wore the same black dress and never changed her underwear unless it wore out. She moved back and forth between New York and New Jersey in order to avoid the taxman. 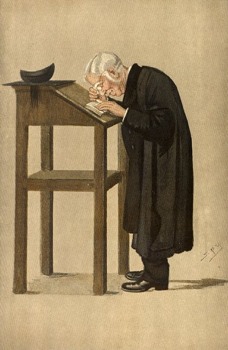 William Archibald Spooner is forever locked into history because the linguistic phenomenon known as a “spoonerism” is named after him. A spoonerism involves the accidental (or sometimes intentional) swapping of letters, words, or vowels in a sentence – for example: “Go and shake a tower” (meaning “go and take a shower”). Spooner was a professor at Oxford and he became so famous for his spoonerisms that people would attend his lectures just to hear him make a mistake. He was not pleased about the great publicity that surrounded him but as he neared death his attitude softened and he gave interviews to the press. Spooner not only got his words wrong: he once wrote to a fellow professor to ask him to come immediately to help solve a problem. At the end of the letter he added a post-script that the matter had been resolved and he needn’t come. Some spoonerisms attributed to Spooner are: 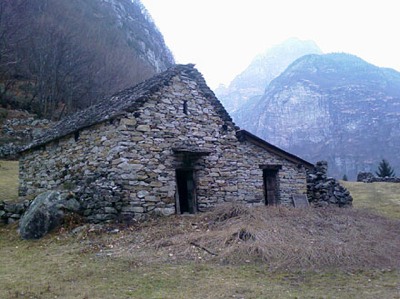 Simeon Ellerton lived in the 18th century and was a fitness fanatic. Because he loved to walk long distances, he was often employed to carry out errands or act as a courier for the locals. On his many frequent journeys he would gather up stones from the roadside and carry them on his head. His aim was to gather sufficient stones to build his own house. Eventually he had enough stones and he made a little cottage for himself. Having spent so many years carrying extra weight, he felt uncomfortable without it, so for the rest of his life he walked around with a bag of stones on his head. 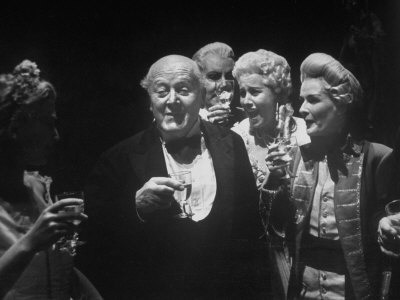 John Christie and his wife are most well known for starting the Glyndeborne Opera Festival but John was also a famed British eccentric. One evening while sitting next to the Queen during the opera, he removed his glass eye, cleaned it, put it back in its socket and asked the queen whether it was in straight. If he got too hot, he would cut the arms off his formal jacket – which he would often wear with a pair of old tennis shoes. He owned 180 handkerchiefs, 110 shirts, and despite paying tens of thousands of pounds on an opera production, would travel third class and carry his own luggage to avoid tipping. For a while, Christie would wear nothing but lederhosen and in 1933, he expected all guests of the opera to do the same. 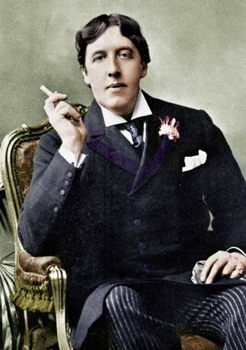 Oscar Wilde is undoubtedly the most famous member of this list – and for good reason. During a time of moral conservatism, Wilde managed to survive his youth decked out in flamboyant clothing exuding eccentricity, because of his stunning wit – the true cause of his celebrity. While studying at Oxford University, Oscar would walk through the streets with a lobster on a leash. His room was decorated with bright blue china, sunflowers, and peacock feathers. He was the direct opposite of what Victorian England expected a man to be and he flaunted it for all he was worth. Unfortunately an affair with Lord Alfred Douglas brought an end to a brilliant career when Wilde was jailed for sodomy. 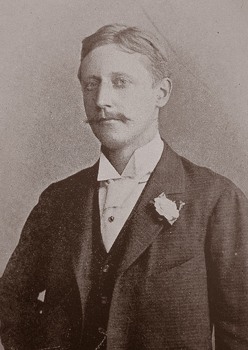 Sir George Sitwell (father of the famous writer Dame Edith Sitwell) was a very bizarre man in many ways. He was a keen gardener (he actually studied garden design) and, annoyed by the wasps in his garden, he invented a pistol for shooting them. After he moved to Italy to avoid taxes in Britain, he refused to pay his new wife’s debts which resulted in her spending three months in prison. He was such an avid reader and collector of books that he had seven libraries in his home. Other eccentricities included paying his son an allowance based on the amount paid by one of his forebears to his son during the Black Death, and trying to pay his son’s Eton school fees with produce from his garden. But perhaps most bizarrely, Sir George had the cows on his estate stenciled in a blue and white Chinese willow pattern in order to make them look better. This is the notice that Sir George hung on the gate of his manor in Derbyshire, England: “I must ask anyone entering the house never to contradict me or differ from me in any way, as it interferes with the functioning of my gastric juices and prevents my sleeping at night.” 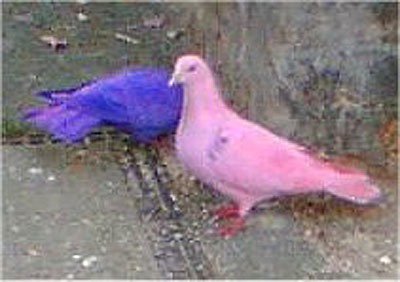 Also known as Lord Berners, Gerald Tyrwhitt-Wilson got off to a strange start in life with a super-religious grandmother and a prejudiced mother. When he was nine he was sent to boarding school where he had a relationship with an older boy – the relationship ended when Lord Berners vomited on him. As an adult, Berners became a relatively good composer and writer – and an extremely eccentric man. He had the pigeons at his stately home dyed in a variety of colors (image above) and he kept a pet giraffe with which he would have afternoon tea regularly. His chauffeur had to fit his Rolls Royce out with a harpsichord so Berners could play music whilst being driven around the countryside. He left his estate to his much younger companion, the equally eccentric Robert Heber-Percy. 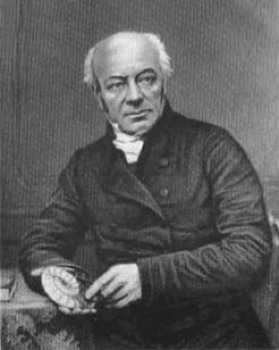 William Buckland is famous for two things: he was the first man to write a full account of a fossil, and he was incredibly eccentric when it came to animals and food. Buckland’s love of natural history resulted in his house being something akin to a zoo. He filled it with animals of every kind and he then proceeded to eat them all (and serve them to guests). He claimed to have eaten his way through every animal. The creatures that he said tasted worst were bluebottle flies, and mole. Various guests to dinner describe being served panther, crocodile, and mouse. A famous storyteller at the time (Augustus Hare) told this tale of Buckland: “Talk of strange relics led to mention of the heart of a French King [Louis XIV] preserved at Nuneham in a silver casket. Dr. Buckland, whilst looking at it, exclaimed, ‘I have eaten many strange things, but have never eaten the heart of a king before,’ and, before anyone could hinder him, he had gobbled it up, and the precious relic was lost for ever.” 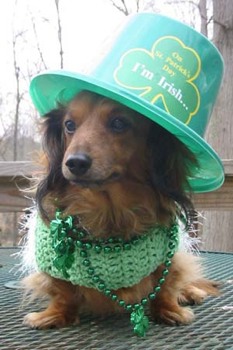 Francis Egerton (8th Earl of Bridgewater) inherited his title along with a very large fortune in 1823. He became famous for his unusual dinner parties which he threw for dogs. All of the invited dogs would be dressed in the finest fashions of the day – including shoes. Another eccentricity was his manner of measuring time; Egerton would wear a pair of shoes only once – when he was done with them, he would line them up in rows in order to count the passing days. He also kept pigeons and partridges which had their wings clipped so he could shoot them for sport even with failing eyesight. When he died he left a large number of important documents on the subject of French and Italian literature to the British Museum, as well as a large financial donation to the Royal Society. 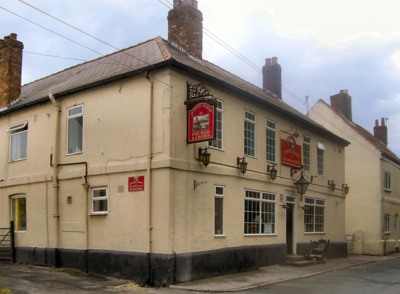 If you thought the previous entries were eccentric, you are in for a surprise. Jemmy (James) Hirst was so famous an eccentric in his own time, that King George III summoned him to tea. When he received the invitation, Hirst declined – stating that he was training an otter to fish. Eventually he did visit the King where he threw a goblet of water over a courtier who was laughing; Hirst believed the man was having a fit of hysteria. The King gave him a number of bottles of wine from the royal cellar. Jemmy loved animals and he trained his bull to behave like a horse. The bull (named Jupiter) would draw his carriage about the village and Hirst even rode him in fox hunts. Instead of dogs, he used pigs that he had trained as hunt dogs. He regularly blew a horn to invite the poor to his home for free food – which was served out of a coffin. When he died, he requested 12 old maids to follow his coffin to the grave, as well as a bagpiper and a fiddler to play happy music.