Rites of passage in adolescence are a cross-cultural phenomenon. They have existed throughout human history and may be a significant factor in the development of a stable adult personality. In Western culture, we are familiar with such rites as the Bar Mitzvah, Sweet 16 parties, and Quinceañera. In tribal cultures, coming of age ceremonies are, in many cases, much more elaborate and can be truly terrifying. 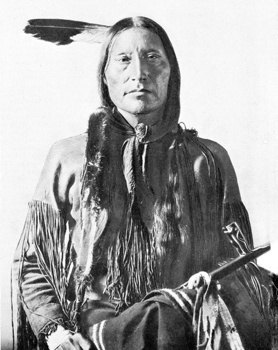 Boys of the Algonquin Indian Tribe of Quebec were brought to a secluded area, often caged, and then given an intoxicating medicine known as wysoccan, an extremely dangerous hallucinogen that is said to be 100 times more powerful than LSD. The intention of the ritual was to force any memories of being a child out of the boy’s mind. Unfortunately some boys also suffer memory loss to the extent that they lose memory of their family, their identity, and even the ability to speak. Some boys who showed recognition towards their childhood after returning to the village were then taken back and given a second dose and forced to attempt to cheat death a second time. 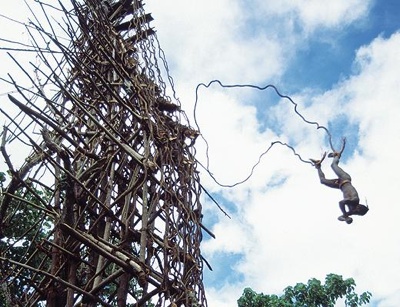 Both a harvest ritual and a rite of passage amongst the tribes of the small pacific island of Vanuatu, land diving is now a tourist phenomenon. The men who live on Pentecost Island in Vanuatu, climb a rickety 98-foot-tall (30-meter) tower, tie vines to their ankles and dive to the ground, falling at speeds around 45 mph (72 kph). When a dive goes correctly, the person gets close enough to touch his shoulders or his head to the earth. However, unlike bungee jumping, these vines aren’t elastic and a miscalculation in vine length could lead to broken legs, cracked skulls, or even death. Boys once they have been circumcised at about age 7 or 8 begin participating, though they usually are permitted to jump from a shorter tower. As a boy makes his first dive, his mother holds an item representing his childhood. When he jumps, she throws the item away. Divers also refrain from sex the day before they jump — legend says it will cause the jump to go badly. 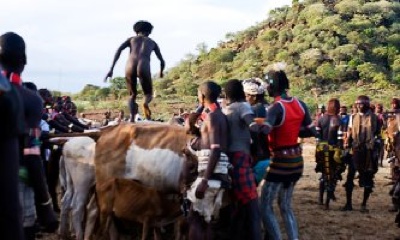 This rite of passage for men coming of age must be done before a man is permitted to marry. The man-to-be must “jump the cattle” four times to be successful and only castrated male cattle and cows may be used to jump over. This test is performed while naked (except for a few cords bound across the chest) as a symbol of the childhood he is about to leave behind him. On completion of this test, the young man joins the ranks of the maza – other men who have recently passed the same test and who spend the next few months of their lives supervising these events in villages throughout the Hamar territory. 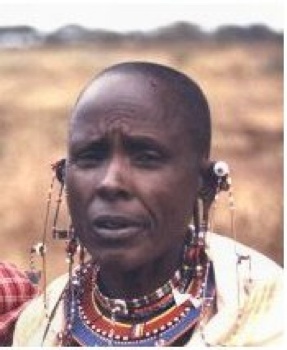 Their rite of passage ceremony is similar for girls and for boys, ages 14 to 16, though the genders are initiated separately. The initiates are first ceremonially circumcised or excised. After this, they live in seclusion from adults of the opposite sex for four to 24 weeks. They paint themselves with white clay and charcoal in order to appear as wild creatures (cemaasiisyek). Certain secret knowledge is imparted by same-sex elders. The most important knowledge concerns the cemaasiit – a mythical beast that haunts the initiates during their time in seclusion. At night its roar can be heard, and the initiation is complete when each youth has seen and held the instrument used for producing the roar and then produced the roar themselves. 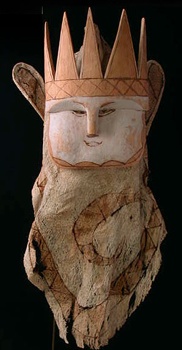 Festa das Mocas Novas is an initiation into womanhood traditionally performed by the Tukuna people of the Northwest Amazon. It begins with the onset of menstruation, and over the next 4 to 12 weeks, the initiate remains in seclusion in a small chamber constructed within the dwelling of the family for this purpose. During this period, the initiate is thought to be in the underworld and in ever-increasing danger from demons known as the Noo. For the climax of the rite, guests arrive and some don masks, allowing them to become incarnations of the Noo. For two more days the initate remains in the seclusion chamber, her body painted with black genipa dye as protection from the Noo. On the morning of the third day, she emerges from the chamber. Surrounded and protected by relatives, she is led out into the festivities. The family dances with her until dawn, at which time the dancing stops. The initiate is then given a fire brand by a shaman and instructed to throw it at the Noo. This done, the power of the Noo is broken, and the Tukuna female is safely entered into womanhood. 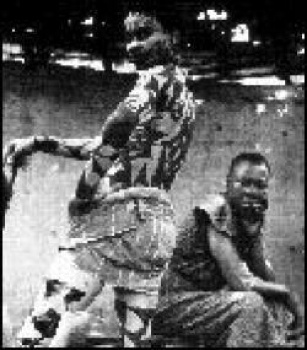 The Iria is a rite performed by the females of the African Okrika tribe. Girls from the ages of 14 to 16 enter into “fatting rooms” where they are fed rich local foods to make the body “come out.” They are taught by the elderly women of the tribe to sing the traditional Iria songs. It is believed among these people that young girls form romantic attachments to water spirits. Before they are considered marriageable and allowed to receive mortal suitors, they must first free themselves from these attachments. This is accomplished by the coming together of the girls at the river on successive dawns to sing the songs they have learned. On the final day, the initiates return to the riverbank and the water spirits are expected to attempt to seize the girls by force. This can be prevented by the Osokolo, a senior male member of Owuper society who strikes the girls with sticks, driving them back to the village, ensuring both their safety and future fertility. 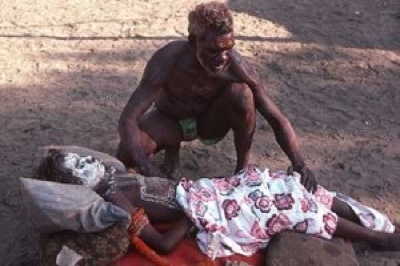 When a young man becomes of age, his tribal elders lead him into seclusion. The men will lay down surrounding the boy facing away from a fire. An assistant will sit on the boy’s chest, while another elder will pull and twist the boy’s foreskin and proceed to slice it off. The men will take the boy to kneel upon a shield over a low-lit fire and made to eat ìgood meat.î Essentially, the meat is the boy’s own foreskin. He must swallow without chewing it, and once he has succeeded, he as eaten his ìown boy,î and become a man. When the circumcision heals, the young man will go through a subincision. His penis will be sliced on the underside, sometimes to the scrotum. The man is then made to stand over a fire to allow the blood to drip into it and purify it. Apparently men do this to sympathize with their female counterparts. And although they will now have to squat to urinate because of these incision, when they become married, some men will often times repeat the same blood-letting process. 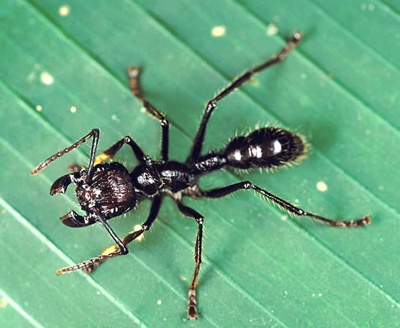 This Amazon tribe performs an initiation ritual where young men really place their hands into mittens filled with hundreds of bullet ants. The bite is approximately 20 times more painful than being stung by a wasp. The tribal men will gather the ants and submerge them into a solution that temporarily knocks them out. The ants are then woven into the mittens. Upon waking up, the men will place their hands into the mittens and dance for 10 minutes. The ant’s sting prevents the body from protecting itself from pain. The body begins to convulse, and the pain can last up to 24 hours. The crazy thing is, many men will repeat this ritual many times to prove their manhood. 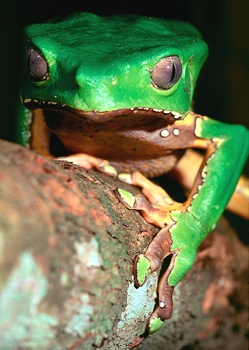 For a man to prove himself worthy to hunt in the Matis Trial in Brazil’s Amazon jungle, he must undergo 4 trials. The first stage involves dumping bitter poison directly into their eyes allegedly in order to improve their vision and enhance the senses. The next series of trials includes beating and whippings. The trial concludes with inoculation of the Phyllomedusa bicolor, a small poisonous frog. After burning an area of the skin, the frog toxin is injected with the use of a wooden needle. The poison is said to increase strength and endurance, however, these enhancements must come after the unbearable lightheadedness, vehement vomiting, and violent relieving of the bowels.

Once the boys prove themselves able to withstand these trials, they are treated to performing them before every future hunt they partake in. 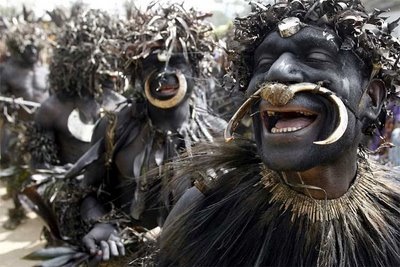 Initiation for this tribe begins at the age of seven, when boys are removed from their maternal figure and all females, and placed in a special house in which they subsist with other males for the next ten years. During the first stage the uninitiated boy’s skin is pierced as a way of discarding any external contamination from women. The boys are required to engage in heavy nose-bleeding. They are also forced to consume sugarcane to stimulate vomiting and defecation, as a way of internally cleansing their body. Once the boys are cleared from any contamination, they are required to ingest semen, which is considered vital to ignite masculine growth, and strength.

Throughout the initiation process, the youths are informed of the impurities that women bring and how harmful they might be to them. In the next stage, the fifth-stage initiation, the youths are taught purification techniques. Once married and engaged in heterosexual activity men must purify themselves of any contamination that might have been brought upon them by their wife. To do so they engage in heavy nose-bleeding, brought up upon themselves, following each of their wives’ menstrual periods. Near the end of the third initiation, the boys are taken to the forest, where they are pointed towards a structure facing a tree. They are told to remove a pubic hair and hand it to one of the men who then, places the hairs into the trunk of a pandanus tree. The boys are told a story about a Jew’s harp and everything it signifies. During this lesson they are forewarned that they are not to be promiscuous during their heterosexual relationships otherwise they will be killed.