Frequently, throughout the history of writing, people have invented their own languages – whether it be to conceal something’s true meaning, or to add depth to a story (as in the case of the Lord of the Rings). This list looks at some of the fascinating (and fun) fictional languages. 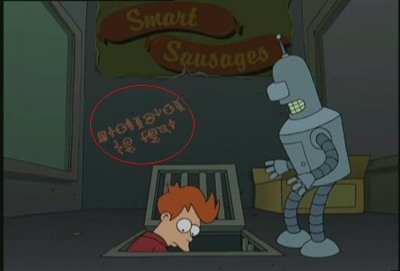 Alienese is a set of fictional languages that often appear, usually as graffiti, in the background of the show Futurama. The first transliterates directly into English, but the second is much more complex; the alphabet is described as one in which “next letter is given by the summation of all previous letters plus the current letter.” Fans have spent their time translating these messages and revealing additional, hidden humor on the show.

In the Harry Potter books, Parseltongue is the language of snakes, and can be understood by human Parselmouths, which are very rare. It can be spoken by Salazar Slytherin and his descendants, including Voldemort, who passed the ability unto Harry when he tried to kill him. J.K. Rowling has stated that she named the language after “an old word for someone who has a problem with the mouth”. To non-speakers, it sounds like a series of hisses, but Parselmouths hear it in their native language. 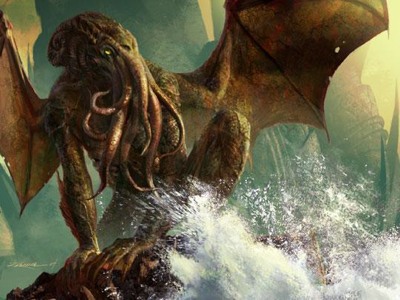 Aklo is a fictional language often associated with the writing of forbidden or occult texts. It was first invented by Arthur Machen in his 1899 short story “The White People,” in which two men discussing the nature of Evil consult the diary of a young girl, written with Aklo words. It is notable for its widespread use in other fiction; H.P. Lovecraft used it in two stories from his Cthulhu Mythos (pictured above), “The Dunwich Horror” and “The Haunter of the Dark”. Alan Moore used the language in his story, The Courtyard, in which Aklo is not only an alien language, but also a key that opens the human mind. Since it is only used fleetingly, and by a wide range of authors, there is no set grammar or vocabulary, and it is unclear from which languages it draws most influence.

Mangani is the language of the apes from Edgar Rice Burrough’s Tarzan novels, and also the word by which the apes refer to themselves. It is described as being composed of guttural sounds that represent nouns and basic concepts. However, the written lexicon, as provided by Burroughs, is much more complex and made of real words, similar in pronunciation to many African languages from the area in which the books take place. The recently discovered Bili Ape has been retroactively compared to the Mangani, both in size and habitat.

Yes, the language that is the bane of high school seniors everywhere. Invented by George Orwell for his dystopian novel 1984, Newspeak was designed by fictional totalitarian regime the Party, to enforce its rule on people. Closely based on English, its vocabulary constantly shrinks to preclude any words that convey the ideas of freedom, rebellion or free thought. Its main goal is to remove any ambiguity from language, giving one word total meaning; this is commonly done by making one word (such as “think”) both a noun and a verb. Opposite words were replaced by a pre- or suffixed version of a word; for example, “bad” became “ungood.” This is thought to have been influenced by Esperanto, which frequently creates new words through a complicated system of adding prefixes and suffixes. As I can’t find a good clip of someone speaking Newspeak, I have included the national anthem of Oceania taken from the film version. The anthem is sung in English.

Invented by author Anthony Burgess, Nadsat is the idiomatic language spoken by the teenagers in A Clockwork Orange. The word itself comes from a transliteration of the Russian word for “teen.” It is a vernacular speech, composed by the youth counterculture; it is basically English, with some transliterated words from Russian, patterns from Cockney rhyming slang, the King James bible, and words invented by Burgess himself. All nadsat words are concrete, lacking the complexity to discuss a subject such as philosophy. The author intended this to show the shallow nature of the juveniles’ minds. In the video above you can hear the main character (Alex) speaking in Nadsat.

Simlish is the spoken language of the Sims, first heard in SimCopter, but most prominently featured in The Sims, Sims 2, and Sims 3. In order to avoid the cost of recording repetitive dialogue and translating it, the project director had the voice actors improvise a gibberish language. The end result was that players were able to fill in their own dialogue, and imagine the character interactions more realistically than a computer could simulate. Soon, the games had songs sung in Simlish, and many famous recording artists have since re-recorded some of their tracks for various Sims games and expansions. Written Simlish, glimpsed in reading materials and on television, is a combination of the Wingdings font and Zodiac symbols, but have no grounding in real grammar. All other games made by Sims genre creator Will Wright employ Simlish as a language. The video above is Lily Allen singing her song Smile in Simlish. You can spend hours on youtube looking up some of the many famous singers who have made a simlish version of their songs – such as Kajagoogoo – Too Shy. The Ting-tings even recorded a song in simlish for their album “We started nothing”.

The only actual language on this list, Esperanto is noteworthy for being one of the most successfully constructed languages in history. It was first detailed by L.L. Zamenhof in his book, Unua Libro, in 1887, published under the pseudonym Doktoro Esperanto. The word “esperanto” means “one who hopes” in the language. Today, it is estimated that there are between one hundred thousand and two million fluent Esperanto speakers, and between 200-2000 native speakers. Both Google and Wikipedia provide services in Esperanto. It is the language of instruction at the Akademio Internacia de la Sciencoj in San Marino. Its structure is heavily influenced by the Indo-European languages, and its vocabulary is mostly derived from the Romance and, to a lesser extent, the Germanic languages.

Qapla’! The language of Star Trek’s Klingons is, today, a nearly fully-developed language. It was first heard in Star Trek: The Motion Picture (1979), and its sound was devised by actor James Doohan (Scotty). Paramount Pictures subsequently hired linguist Marc Okrand to fully flesh out the language, which he deliberately designed to be “alien”. The first Klingon dictionary was published in 1985, and other books, such as Klingon phrasebooks, have supplemented the language. The Shakespeare plays Much Ado About Nothing and Hamlet have been famously translated into Klingonese, after a famous line in Star Trek VI: The Undiscovered Country: “Shakespeare is best read in the original Klingon”. It is said that Okrand was heavily influenced by Native American languages, and the tendency of the language to develop long chains of nouns (ex: “gun and sword and spear”) comes from Sanskrit. As of 2006, it held the world record for the fictional language spoken by the most people.

The above term is used to describe the many fictional languages invented by J.R.R. Tolkien for The Lord of the Rings and other works taking place in Middle-Earth. This was done out of a desire to give real linguistic depth to names and places that Tolkien felt were lacking in fantasy and science fiction. The two most mature of these languages are Quenya (High-Elvish – heard in the video clip above) and Sindarin. Quenya is comparable to Latin, in that it is an old language used contemporarily (in Middle-Earth) as an official language. When written in English, the words contain many accents, which are usually on every vowel (they also employ the dieresis, the two little dots above a letter). These two languages were heavily influenced by Finnish and Welsh, though as they developed further, the influence became less and less apparent. The depth and complexity of these two languages are incredible, as demonstrated by their influence on Middle-Earth culture and other Middle-Earth languages. What is even more amazing is the sheer number of languages Tolkien created for his world, with each race having dozens of offshoots and dialects. His work with the many tongues of Middle-Earth truly exemplified the potential of fictional language, and demonstrates the importance that language plays in creating a society.