by flibbertigibbet
fact checked by dickensgirl

While still considered a strange destination on holiday, a growing number of people are seeking out cemeteries to visit. There is an inherent fascination in cemeteries that should be embraced. Whether you are interested in the architecture or artwork of the tombs, the history of the area, or simply seeking out the final resting place of a favorite personality, cemeteries are a worthwhile destination. Below I list a by-no-means definitive list of some of the most famous cemeteries in the world. The list is in no order, and the selections are based on what I am most familiar with personally. Please feel free to suggest further destinations in the comments. Note: in the interest of brevity, I have stuck strictly to cemeteries, omitting other places people may be laid to rest. 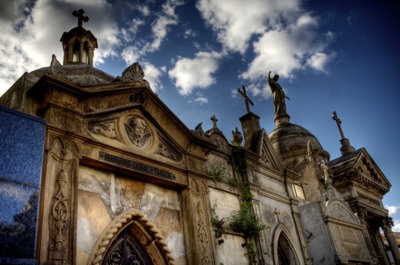 Always topping lists of places to visit in Buenos Aires, the Cementerio de la Recoleta is a fascinating glimpse into Argentine history. The most famous tomb is undoubtedly that of Eve Peron’s, but there are many more Argentinean politicians, poets and personalities. The cemetery is designed much like a city, with wide avenues branching off into alleyways, all lined with “houses” for individuals and families. Many are exceptionally well maintained, but there are many more that no longer have family members to maintain them and have thus fallen into disrepair. There are stories of crypts being used as maintenance closets, with cleaning supplies stored on top of coffins. Among the tombs that have been maintained, you will find many sculptures that have been declared national historic monuments, as well as a myriad of styles, from Egyptian to Gothic to Art Deco. Another interesting note: among Argentina’s rich and famous deceased, you may also find a colony of feral cats that have made Cementerio de la Recoleta their home, and who are often fed by the locals. 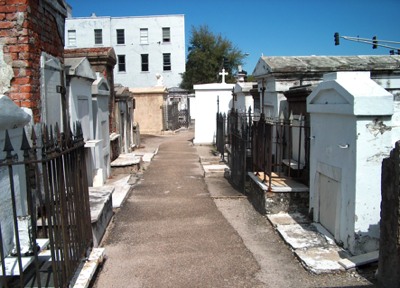 This is actually three cemeteries. Each is worth visiting, though Saint Louis Cemetery #1 is, in my opinion, the most interesting, and the one I will be referring to. The tombs in Saint Louis are above ground, and the stone buildings are actually concealing bodies only a few feet away from the visitor. The reason for this is supposedly because the ground water level in New Orleans is impractical for burials, though there is some dispute of this. Saint Louis #1 is more than a little run down, and a tour guide is strongly recommended. Voodoo is alive and well in New Orleans and the tomb of Voodoo Queen Marie LaVeau is supposedly located in the Glapion family crypt in Louis #1. When I visited, graffiti made this particular tomb hard to miss, but that was a few years ago, and I can’t vouch for what it looks like now. As an aside, when I visited I did not go with a tour. Aimless wandering through the one square block cemetery found many tombs that had been broken into, and more than a few remains scattered. This cemetery is not for the fainthearted. 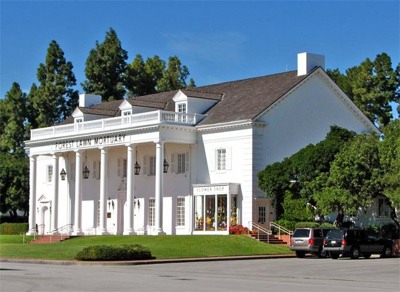 Also: Hollywood Forever (Hollywood, Los Angeles, California, U.S.A.) Three places for the price of one! First, Forest Lawn: A unique entry… The creators of these parks wanted to approach the creation of a final resting place with a sunnier outlook. The result is practically a theme park for death. Traditional headstones are ditched in favor of markers set into the ground, and replicas of artwork –paintings and statuary- and famous buildings from all over the world, abound. If, for instance, you want to see the complete collection of Michelangelo’s sculptures but can’t afford to bounce around Europe, look no further. This cemetery contains the only complete collection in the world that is made from casts of the originals and marble from the same quarry Michelangelo used. Between Glendale and Hollywood Hills you can find the final resting place of what may seem like most of Hollywood (and you’ll find the rest at Hollywood Forever). Curiously, some of the graves are in a restricted section, among them Hollywood elite such as Humphrey Bogart, Nat King Cole and Mary Pickford, but most are available to the public. Some of the more visited markers are those of Walt Disney, L. Frank Baum, Errol Flynn, James Stewart, Spencer Tracy, Tex Avery, Scatman Crothers, Bette Davis, Marty Feldman, Buster Keaton, Fritz Lang, Liberace, Telly Savales (buried with a lollipop!), and many, many more. Hollywood Forever is located nearby, adjacent to the north wall of Paramount studios. It is less popular because it spent the latter part of the 20th century being run down and financially mismanaged. It was purchased by its current owners in 1998 and refurbished. Movies are screened there in the summertime, drawing hundreds of visitors. Famous occupants include Mel Blanc, Cecille B. DeMille, Douglas Fairbanks, Douglas Fairbanks Jr., George Harrison, Johnny and Dee Dee Ramone, Rudolph Valentino, and my all time favorite actor, Peter Lorre. 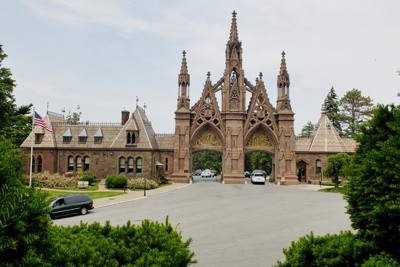 Boasting 600,000 graves spread out over 478 acres, this site is a popular tourist attraction for those visiting New York City. Like Père-Lachaise, there was a campaign to promote the cemetery involving moving famous bodies there and donating monuments. Unlike Père-Lachaise, the plan didn’t really work, and from the time it was opened in 1838 until the building of the Brooklyn Bridge in 1883 made it easier to get there, the cemetery did not get that many permanent residents. Those that did come to stay had plenty of room to do so, however. There are hundreds of ornate tombs for famous and non-famous residents alike, but the site still seems wide open. Most New Yorkers who made their name in the second half of the 19th century (a prolific chunk of time for famous New Yorkers) can be found here. There are also war memorials and monuments, including an Obelisk that serves as a grave marker for 103 of the nearly 300 victims of the Brooklyn Theater Fire. 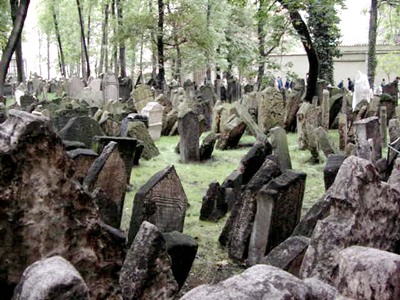 Easily the oldest cemetery on this list, with the earliest discernable headstone dating back to 1439, the Old Jewish Cemetery operated until 1787, which means it closed before most of the entries on this list had opened. The headstones bear this out, jumbled at strange angles and deeply weatherworn. Ropes divide the walkway from the headstones, and tickets can be bought to see the cemetery individually or in addition to visiting the surrounding synagogues. Interestingly, while many Jewish cemeteries were destroyed during the holocaust, Hitler specifically requested this one remain intact, as he apparently intended to build a museum here after his assumed victory. 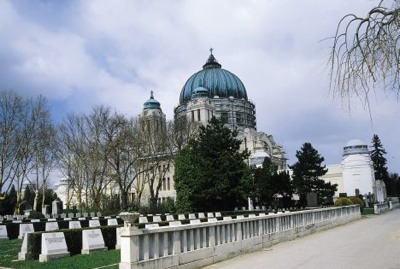 At 2.4 square kilometers, it is the second largest cemetery (after Hamburg) in Europe. It also, at 3.3 million occupants, is the largest in Europe by number interred. Conveniently, the most famous occupants of Zentralfriedhof are located in a section called the Ehrengräber. Just as Vienna is the capital of classical music, so the Ehrengräber is the home of many classical musicians and composers, many of whom where moved from other cemeteries (to complete the collection, so to speak). Here you will find Ludiwg Van Beethoven, Johannes Brahms, Antonio Salieri, Franz Schubert, Johann Strauss (I&II), and, interestingly, Falco (of Der Kommissar fame). 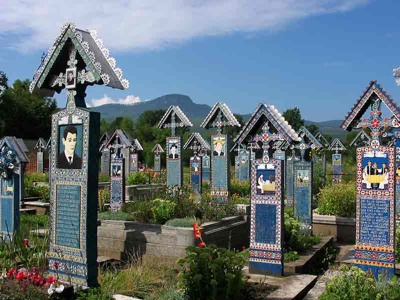 A strangely joyous cemetery, Merry Cemetery contains hundreds of wooden markers brightly painted with scenes from the lives (and sometimes the demise) of the deceased, as well as poems about their lives. There is little or no weather proofing on the markers, so that the paint fades with the memories of the dearly departed. You can find many pictures of markers here, with translations of some of the inscriptions. 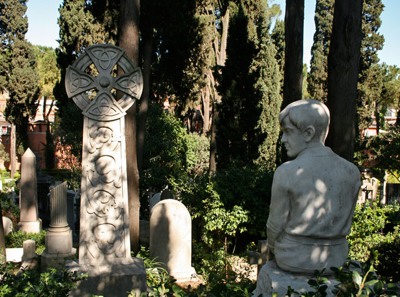 Also known as the Englishman’s cemetery and the Non-Catholic Cemetery, the latter moniker applies the best. This was the place to bury those who died in and around Rome but who where not Catholic. The most recognizable feature of the cemetery is probably the Pyramid of Cestius, a small scale Egyptian style pyramid built around 18 to 12 B.C. that is the tomb of a Gaius Cestius Epulo, making it the oldest tomb in the cemetery by over a century and a half. It was incorporated into the city fortification known as the Aurelian Walls, which were, in turn, later used as a partial border to the cemetery. The first modern burials date from the mid 1700’s. Its most famous residents include the poets John Keats and Percy Shelley, making it a pilgrimage site for fans of Romantic poetry. An interesting story surrounds the burial of Percy Shelley. Though he was cremated on the beach near where he drowned, his ashes (minus his heart, which would be buried with Mary Shelley years later) where to be interred here. The body of his son, William Shelley, also buried in the Protestant Cemetery, was exhumed to join his father. Unfortunately, the body exhumed was that of a 5 1/2 foot man, not the body of a three year old boy. In the end, William Shelley’s body was never found, and Percy Shelley was buried without him. 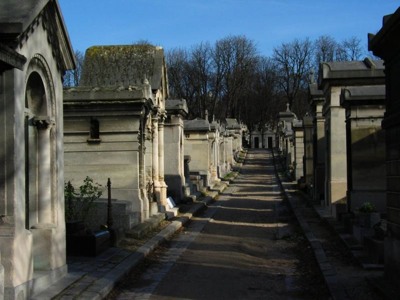 Located east of Paris’ city center, Père-Lachaise has become arguably the most famous cemetery in the world, boasting hundreds of thousands of visitors a year. It was not always this popular, though. When it was first opened in 1804, no one wanted to be buried there because it had no history. In a campaign to promote the cemetery, famous bodies where actually moved to Père-Lachaise, among them Molière and the famed lovers, Heloise and Abelard. This unusual attention grabber worked, and Père-Lachaise became the place to go when you were done going places. There are so many famous buried in Père-Lachaise, it could make up its own list. Off the top of my head: Marcel Proust, Gertrude Stein, Jim Morrison, Oscar Wilde, Isadora Duncan, Camille Pissarro, Édith Piaf, Marcel Marceau, Ticky Holgado, Max Ernst, Colette, Frederic Chopin, Sarah Bernhardt, and Honore de Balzac. If you won’t be finding yourself with a spare day in Paris in the near future, there is an excellent virtual tour found here.

The amazing thing about Highgate cemetery is its setting. Unusually, it is located in a fairly wooded area, so that the complex monuments and simple gravestones alike are surrounded by trees, ferns and wildflowers. While the Friends of Highgate Cemetery who took over maintenance of the decaying site in the late seventies-early eighties have done much to improve conditions, the grounds, particularly in the west cemetery (available by tour only) are still rough terrain in some places, the vegetation constantly threatening to swallow the place whole. The most famous of its monuments is by far the tomb of Karl Marx, but various other Victorian celebrities boast fascinating monuments here.