Throughout the history of the Catholic Church, thousands of saints have come and gone. Many of them become patron saints because of the experiences in their own lives. These experiences are often bizarre and frequently gruesome. This list looks at ten of the more unusual cases. St Dymphna’s story is truly sad, but one that parallels many popular folk legends. Dymphna was a virgin daughter of a pagan king. She secretly baptized into Christianity. After her mother died, her father became insane with grief, and declared that he would only marry another woman as beautiful as his wife. Eventually he noticed that Dymphna his own daughter, shared his wife’s beauty. He determined to marry her, but the girl fled from him in horror, accompanied by a trusted priest. They sought sanctuary elsewhere but were found by her father’s men. The priest was promptly killed, and her father once again proposed to her. She refused to marry him, and he himself struck off her head. Dymphna is depicted as a beautiful, virginal, young girl. She is often holding a holy bible and white flowers. She is the patroness of incest victims and the mentally disturbed.

Simon Zelotes (or Simon the Zealot) was one of the twelve disciples. He had previously been a violent man but was converted by Jesus. Not much is known of his life after Jesus’ death, but he is believed to have travelled widely preaching the gospel. Legend has it that he was martyred in Mesopotamia by being hung upside down and sawed to death – longitudinally. He is often depicted holding the saw that was the instrument of his martyrdom. St Apollonia was an old deaconess who fell victim to the persecutions of Christians in Alexandria. As Christians fled the city, Apollonia was seized by a mob. They beat her and knocked all her teeth out. They then lit a huge fire to burn her if she did not renounce Christianity. Begging for time as though she would comply with their demands, instead she jumped into the flames herself and died without renouncing her faith. She is the patroness of dentists, and is depicted holding pincers containing her tooth or with a gold tooth on a necklace. 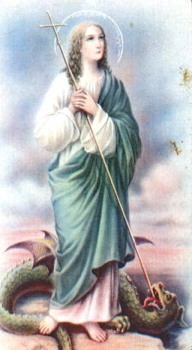 St Margaret of Antioch was a popular saint in the middle ages. Legend states that she was the daughter of a pagan priest, but decided to convert to Christianity. This angered her father as well as a suitor whose advances she rejected. They had her reported to the authorities as a Christian, and she was jailed. In jail she met the devil in the form of a dragon, who proceeded to swallow her whole. The cross she carried however, irritated the dragon’s belly and she was able to tear her way out using the cross and emerge whole from the dragon. Several attempts were then made to execute her by drowning and fire, all of which failed, leading many who witnessed her tortures to be converted. She was finally beheaded. She is often depicted emerging from the dragon’s belly, cross in hand. Appropriately, she is the patroness of childbirth. 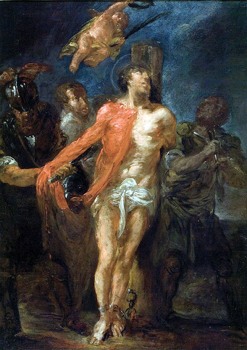 Saint Bartholomew is one of the Apostles of Christ. After Christ’s death he travelled the world as far as India, evangelizing and preaching the gospel. He fell afoul with the pagans in Armenia where he was martyred. Legend states that he was flayed alive (removing the skin from the body while keeping it as intact as possible), and then crucified upside down on a cross. He is the saint invoked by those who deal with skins and leather. He is depicted in art as a man holding his flayed skin. 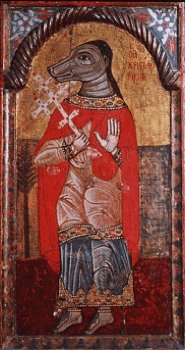 St Christopher belonged to a tribe in North Africa known as the Marmaritae. That area of the world was then largely unknown and considered inhabited by all sorts of strange creatures, including dog-headed men. Some conflicting legends surround Christopher. In one he is a dog-head captured by the Romans and forced to serve them. He becomes a Christian convert and thus a unique figure amongst his kind. Another legend has St Christopher carrying an infant across a river, only to find him growing unbelievably heavy as they progress. The child then reveals himself to be the Christ child and his heaviness due to the weight of the world on his shoulders. Still other legends exist about St Christopher actually being granted the face of a dog by God, to ward off unwanted female attention. He is often depicted as a richly robed dog-headed man – a cynocephalus. St Roch was born of nobility but soon renounced his life of wealth and privilege to work amongst plague victims. He travelled the country effecting many healings of plague victims. When he too contracted the plague, he retreated to a secret hut in the woods. He was there befriended by a dog, who brought him sustenance and licked the sores on his leg until he was healed. When he eventually returned to civilization, many who had previously known him were dead. He was imprisoned, and with his dog continued to minister to suffering prisoners until his death. He is the patron saint of dogs and is invoked against diseased body parts. He is depicted lifting one hem of his robe to reveal his leg sores, while his faithful dog licks them.

As a beautiful woman St Agatha attracted the attentions of a powerful judge named Quintianus. When she refused his advances he had her sent to a brothel. She prayed and after 30 days remained still untouched. Quintianus then ordered that she be chained, whipped, stretched on a rack and burnt. During these tortures her breasts were cut off. Legend states that St Peter miraculously healed her wound that night. The enraged Quintianus then had her rolled on hot coals and glass until she finally expired. She is the patron saint of breast cancer sufferers. She is depicted carrying her breasts on a plate. On her saint day ( 5 February) in Sicily, little marzipan confections resembling breasts are still eaten today. St Denis had an exceptional youth, testifying and converting pagans to Christianity. He eventually became bishop of Paris. His many conversions however, ultimately enraged the pagan priests, who decided to execute him by beheading. Legend states that after his head was chopped off, he picked it up and walked several miles with it tucked under his arm, preaching all the way. He is represented as a headless body holding its decapitated head in its hands. St Lucy as a young girl decided to devote her life to Christ and refused to marry the groom selected by her mother. Though her mother eventually accepted her decision, her jilted suitor was not so generous, and reported her as a Christian to the authorities. Trying unsuccessfully to force her into prostitution, the soldiers found her body strangely heavy and immovable. Thus as punishment, she was tortured by having her eyes gouged out, and then killed. Legend states that God restored her sight before she died. She is represented in iconography as a young martyr holding her eyes on a plate, and is the patron saint of eye problems and blindness.