Urban legends—from little elementary kids telling each other that swallowing a watermelon seed will make a watermelon grow in your stomach from teens daring each other to walk up to the “murder house” of the neighborhood—every one of us has heard them. The thing that makes urban legends so interesting is that they’re spread with the belief that they’re true. Urban legends come to be because of mysterious sightings, real experiences of people, and true historical events, so it makes them much more believable than simple creepypastas and scary stories. Most of them, however, are either completely untrue, remain unconfirmed, or extremely exaggerated. Only a small minority of urban legends have been confirmed as real. 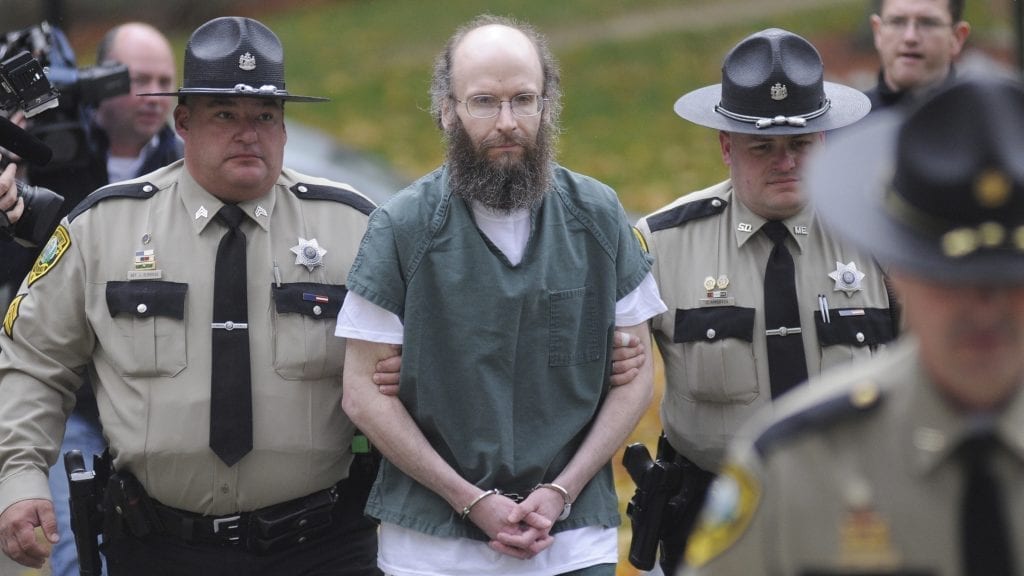 For years, residents of North Pond, Maine noticed the constant disappearance of items in their homes. Instead of watches and wallets, however, it was simple things like peanut butter, or apples. Considering the inconsequential nature of the items, the residents didn’t think much. Not until the break ins happened again, and again, and again—1000s times in fact.[1] Finally, the police were able to catch and arrest the culprit—the “Maine Hermit,” Christopher Knight. When Christopher Knight was only 20 years old, he purposely stranded himself in the woods and lived without any other human contact for 27 years. He stole what he needed to survive, but avoided all other people. In the end, residents of North Pond finally got the answer to the mystery of their missing items.

9 The Boogeyman of New York, Cropsey 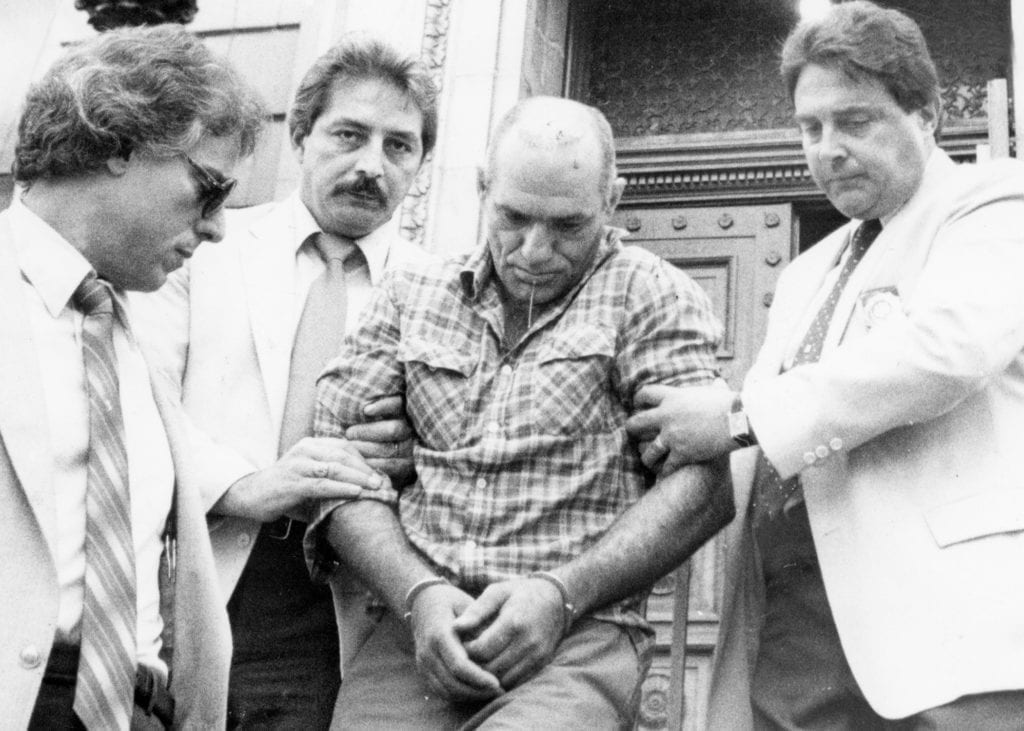 The story of Cropsey was once just a Staten Island urban legend kids told to scare each other. As it was said, Cropsey was an escaped mental patient with a hook for a hand that kidnapped children and murdered them in the underground abandoned tunnels of the Seaview Hospital. Parents would even use the story to scare their kids into keeping curfew or going to bed. In the ’80s, however, the urban legend manifested in real life. A bus full of children was hijacked by Cropsey, and five other children went missing at his hands. One poor child’s body was found in a shallow grave near the Willowbrook State School.[2] Willowbrook State School, if you don’t recognize the name, was the subject of a national scandal in the 70s—children at the school were exposed to sexual abuse, corporal punishment, unsanitary conditions, overcrowding, and even unethical medical experiments. Our boy, Cropsey, turned out to be Andre Rand, the janitor at the school. Rand was convicted for kidnapping and lives in prison to this day. 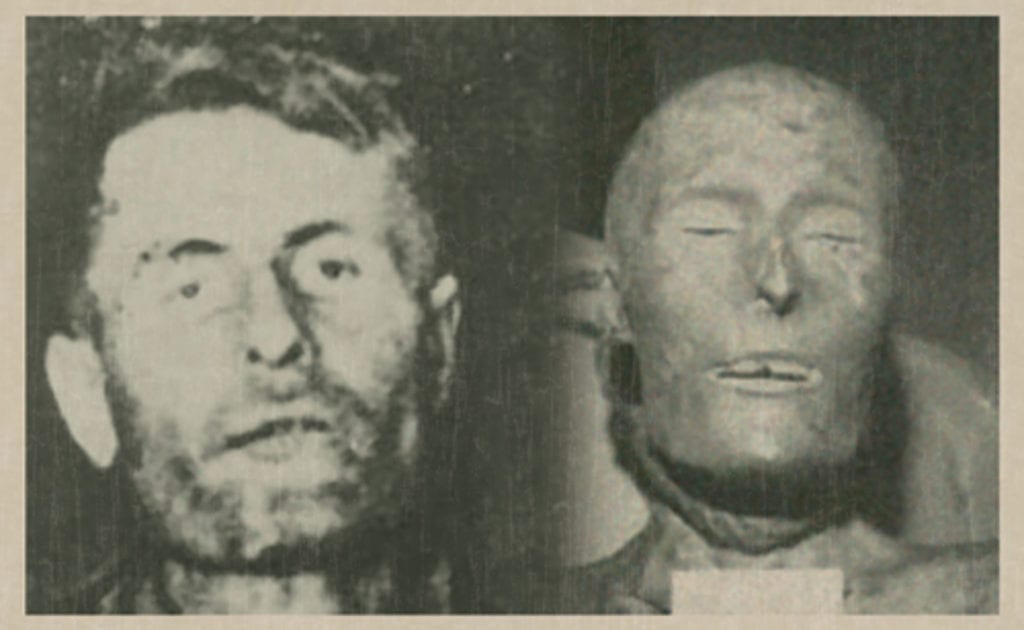 Real or not, corpses tend to give many of us the creeps. So to think that the haunted house zombie or the carnival mannequin beside you was more than just a prop? It’s the stuff of nightmares. In 1976, a film crew went to Pike Amusement Park in Long Beach, California for filming. While filming on one of the “spooky rides” of the park, a crew member reached for a hanged mannequin’s arm, which broke off. Upon examining the dismembered limb however, the worker saw real skin and bone. Turns out, that “mannequin” was no prop. In fact, it was the mummified corpse of outlaw and train robber, Elmer McCurdy. He was killed in a shootout after trying to evade the police. He was taken to a funeral and embalmed, but no one claimed the body, so the undertaker used him for display—people could see the body for dropping a nickel into the corpse’s mouth.[3] A carnie eventually showed up a claimed to be a relative wanting to “lay the body to rest.” From then on, McCurdy’s corpse was used as a carnival attractions for decades. Eventually, the story of outlaw Elmer McCurdy was lost and the corpse was assumed to be fake. When the TV crew finally discovered the old boy he was laid to rest in Oklahoma. A layer of concrete covers the casket to prevent him from becoming a traveling attraction again. 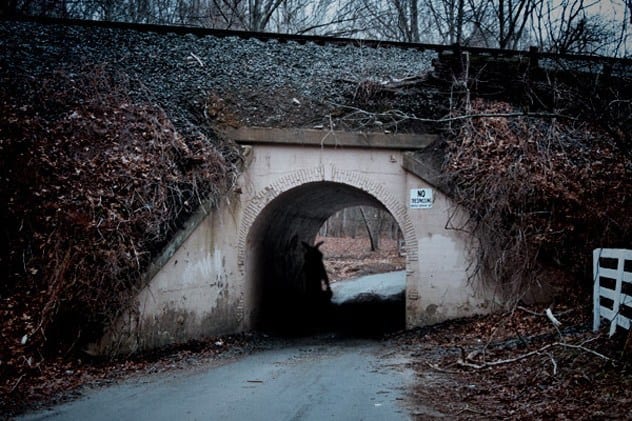 Many towns have their own share of local scary stories and haunted locations, and Virginia’s Fairfax County was no different. For decades, kids told each other the story of the “Bunny Man,” a threatening man in a bunny suit with an axe. Supposedly, Bunny Man was responsible for the murder of a couple children as well as some disappearances and the scattered presence of mutilated animal carcasses around the county. In truth, the story isn’t quite so wild. In October of 1970, the Washington Post published an article: “Man in Bunny Suit Sought in Fairfax,” after a couple had a hatchet thrown into their car windshield by a man in a bunny suit. The man threatened the couple for “trespassing” and then disappeared in the woods. Only a week later, the same event occurred once again with a separate couple.[4] Though not quite as extravagant as murder, the bunny man was actually a very real man with an axe and everything. 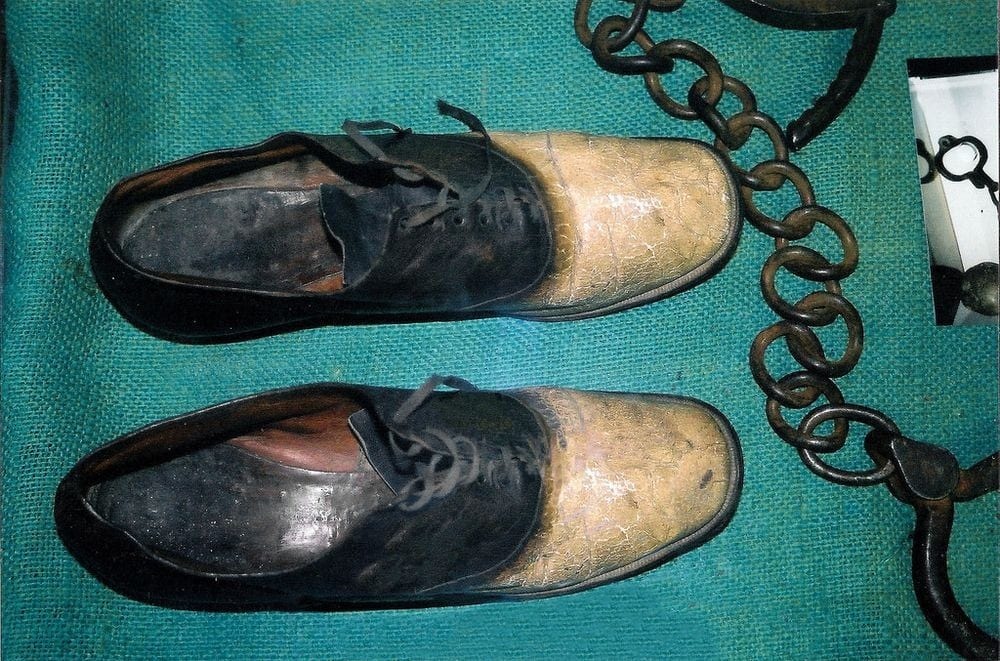 It’s not uncommon in horror movies for things made of skin, or bones, or something else more morbid. There was a case, however, where it was more than just a horror trope. George Parrot, or “Big Nose George,” was an ol’ wild west criminal. He stole horses, robbed stagecoaches and trains, and even murdered the local sheriff and detective.[5] He did, at least, until he got caught. He was found guilty of murder and sentenced to death by hanging. After the deed was done, no one came forward to claim the body. Two doctors present at the time asked to have the body for medical study. Though one of the doctors did study his brain, George’s corpse was mainly used for… not medical purposes. In fact, the cadaver was skinned and made into shoes and part of the skull was given as a gift to a medical protege. The rest of the body was buried in a whiskey barrel. The shoes still exist today and can be viewed at the Carbon County Museum in Rawlins, Wyoming. 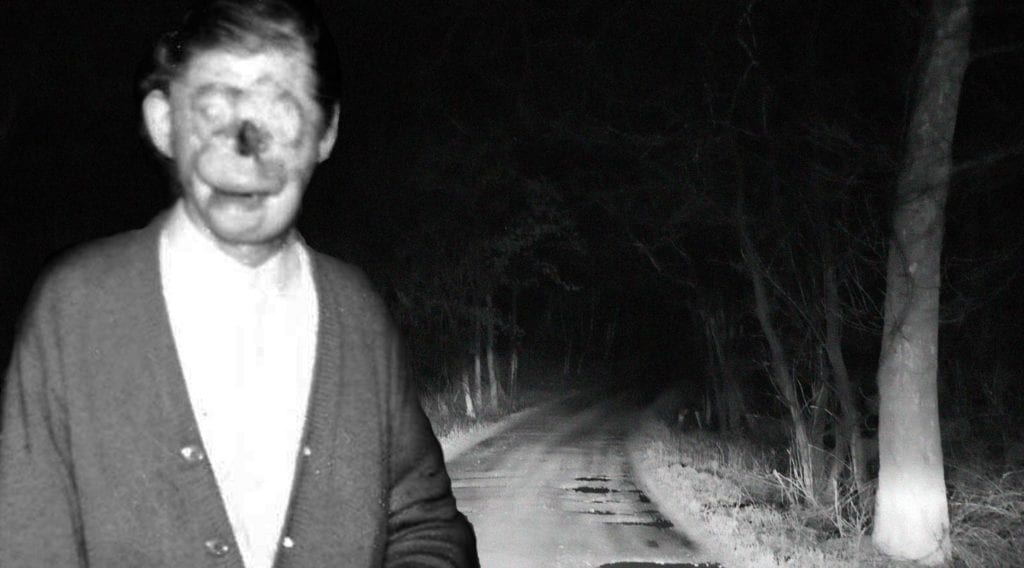 Many people near Pittsburg know the story of Charlie No-Face (also called the Green Man). Depending on who you asked, he was a ghost, a monster, or a simple factory worked who had been horribly disfigured as a child and lost his face. This Beaver County bogeyman was more than just a legend, however. He was a real man and resident of Big Beaver, Pennsylvania. His real name was Raymond Robinson and was a normal boy—up until the accident. He was burned by high voltage when trying to climb an inoperative trolley line and, though he survived, he lost his eyes and nose and his lips and ears were horribly disfigured. Wanting to get some fresh air, but knowing his appearance would frighten others, Robinson began walking the roads at night. Word spread to local residents and people began to drive down to try to see him. Some even brought cigarettes and beer.[6] Eventually, the story of Charlie No-Face was passed on until it became an unrecognizable ghost story, but Charlie was really just a kindly victim of a tragic accident. 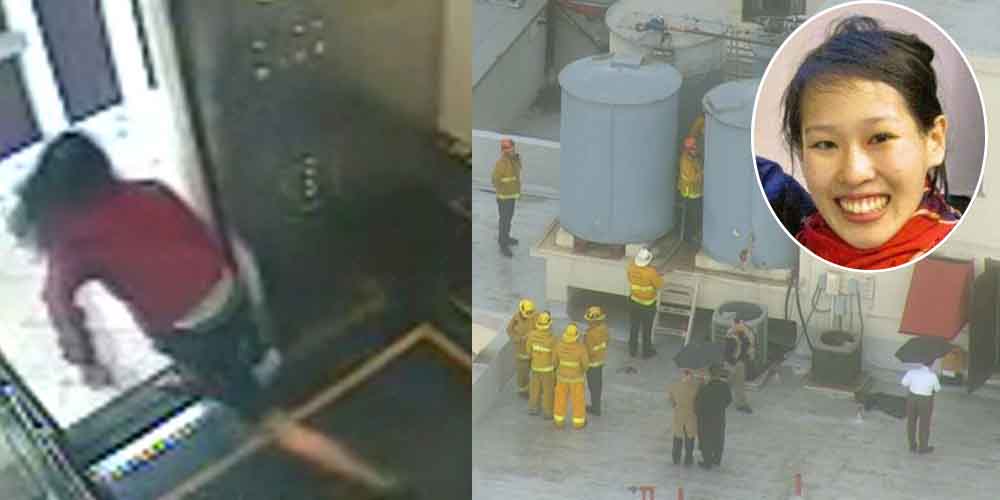 Have you ever gotten a glass of tap water and thought it tasted a bit funny? Well, this exact thing happened to guests of LA’s Cecil Hotel but with a gruesome twist. Elisa Lam was a 21-year-old Canadian tourist visiting LA. After Jan 26, 2013, however, she went missing. For 2 weeks her whereabouts were unknown. Unknown, that is, until a maintenance man went to check the Cecil Hotel water tank because of “water pressure issues”.[7] Inside one of the four large tanks he found Lam’s naked corpse. Surveillance from the night of her disappearance showed her acting strangely: pressing all the elevator buttons or getting in and out of cars. The police deemed the incident a tragic accident, and health officials assured hotel guests that the water was not contaminated because of the body. Even so, guests were understandably upset. 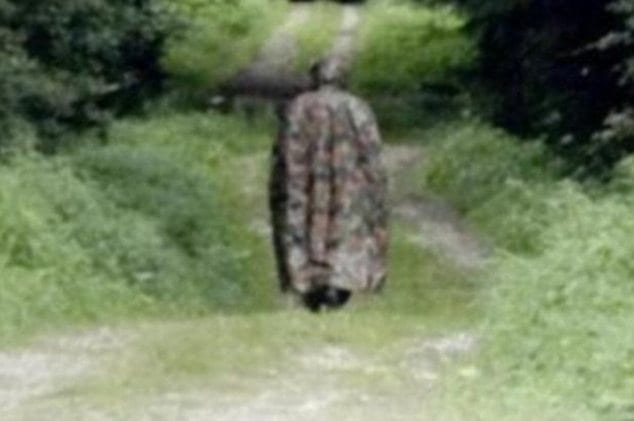 Cryptids are a common thing. Some of them are extremely famous, like Bigfoot or the Loch Ness Monster. Others like mothman or thunderbird are uncommon but still far reaching. Some, like our aforementioned Maine Hermit or Cropsey, are only known locally. Le Loyon is most similar to the latter two. For about a decade, residents of Maule, Switzerland have experienced sightings of a mysterious man in the forest wearing a gas mask, boiler suit, and a cloak. Most who have encountered the mysterious Le Loyon retreated in fear, despite him/her showing no aggression. In fact, one observer even saw Le Loyon holding a bouquet of flowers one time.[8] Though questions about Le Loyon remain unanswered, one observer was able to snap a picture of the mysterious man, thus proving his existence. 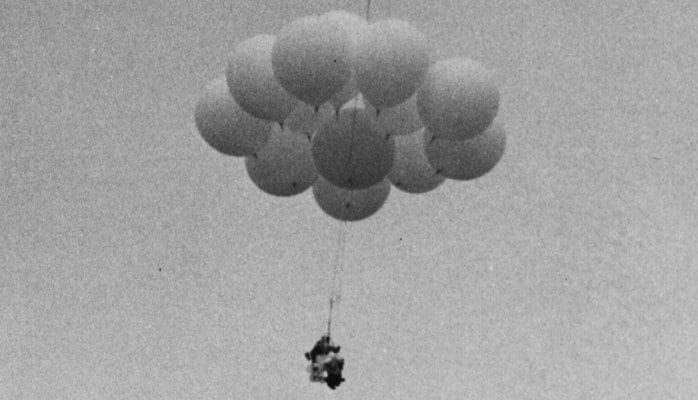 Many of us have dreamed of flying as children. With movies like Up and Mary Poppins it seems to be a fairly easy task—just get a lot of balloons, or maybe jump down the stairs with an umbrella. Okay, so maybe these methods don’t quite work like we’d hoped, but one man was actually able to accomplish it. In the ’80s, Larry Walter tied 42 weather balloons to a lawn chair and was able to soar 3 miles in the air for multiple hours.[9] To return to earth, he used a pellet balloon to pop the balloons one at a time. Unfortunately, the balloons caught on power lines and caused a 20 min outage in Long Beach. Though he was issued a $1,500 fine, he received international attention and ever appeared on “The Tonight Show.” 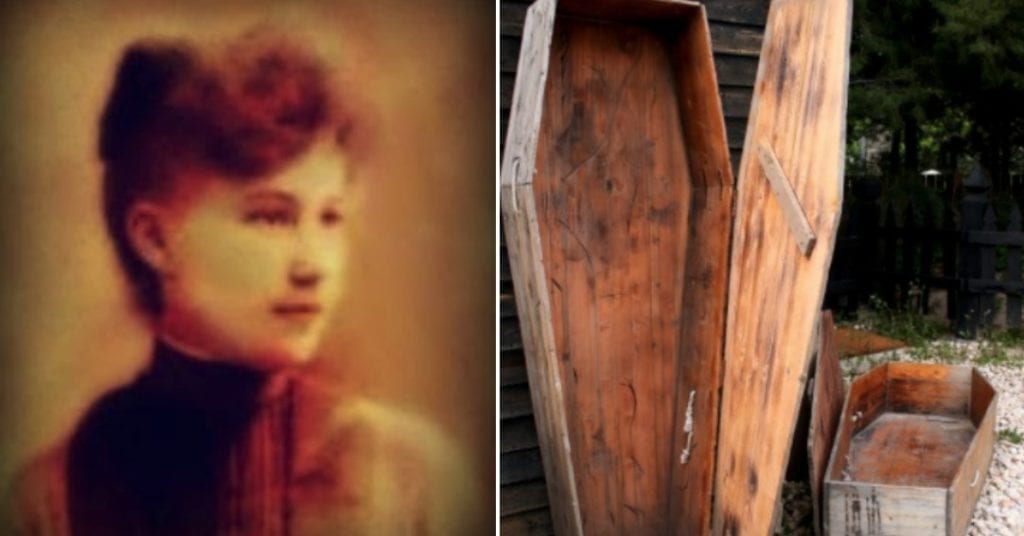 I think most of us have probably heard the story of someone being buried alive: some person was proclaimed dead and was buried but later woke up, alive in their casket. When the grave is later dug up, the person is found dead by suffocation with horribly mangled fingers and scratch marks on the inside of the coffin. The story of Octavia Hatcher is likely the source of this legend. She fell ill and went into a coma in the late 1800s. Not long after, she was pronounced dead and swiftly buried. Not even a week later, other people began showing similar symptoms to Octavia—falling into a coma with extremely shallow breathing. These individuals, however, woke up. Her husband, worried she had been buried alive, ordered her to be unburied. Sadly, his suspicions were correct. Octavia was found dead in her casket with a scratched face and bloody fingers. The lining had even been torn from the coffin’s lid.[10] She was shortly reburied.

You can find the student and freelance writer, Elizabeth Boyer, on YouTube at “Lizzie Boyer.”


We can never get enough of urban legends. So here’s 10 Crazy Urban Legends With Way More Truth To Them Than You Imagined and 10 Bone-Chilling Urban Legends.