This list is a companion piece to the earlier “10 Cases of Liberal Hypocrisy”, which took issue with Alan Colme’s statement that only conservatives could be “infected” with hypocrisy. The thesis was that hypocrisy is a sad part of the human condition, and no one person or ideology is immune. In the interest of fairness, I decided to take on the other side, and was positively spoiled for choices. 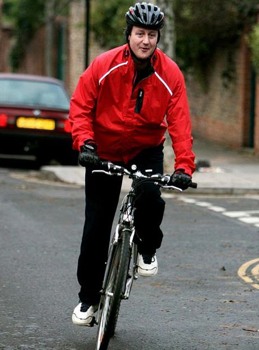 Hypocrisy: Cycling to Work But Chauffeuring His Documents in a Car

David Cameron is a conservative Member of Parliament in the United Kingdom. He is a noted environmentalist and famously cycles to work on a near-daily basis. However, he also has an assistant follow him in a car to carry his briefcase. Two words, Dave: thumb drive. You can decide where to stick it when you’re riding. 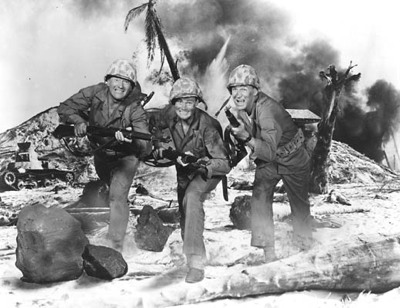 Hypocrisy: The War Movie Hero That Never Went to War

Well, kinda. I’m being a little harsh here, but Jimmy Stewart and Henry Fonda jumped through hoops to serve. In 1941, Wayne was 34 years old with a failing marriage and four kids to feed. Sure, his career was starting to flourish, but he definitely wasn’t a star and he definitely wasn’t rich. So from 1939-1944 he got a 3A deferment (deferred for dependency reasons). In 1944, Wayne received a 1-A classification (ready for immediate induction), but the president of RKO Pictures threatened to sue the government and Wayne personally if he enlisted. A month later the Selective Service reclassified him 2-A (deferred in the national interest). Wayne made 13 (mostly war) films during the war and became the very image of the American soldier. He also became a bona fide star and made a few halfhearted attempts to serve, but never really followed up. No one knows why. But after the war, Wayne became “the most famous Republican in Hollywood”, and was an ardent anti-communist (even supporting the House of Un-American Affairs committee). All who knew Wayne said that not serving was “the most painful experience of his life”, and that it haunted him the rest of his days. 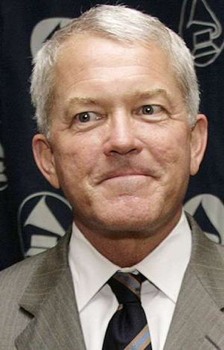 Mark Foley was a Florida congressman who lamented that Bill Clinton’s runaway sexual addiction caused his scandal with Monica Lewinsky. And yet Foley had demons of his own. On September 29th, 2006 Foley resigned his congressional seat after reports surfaced that he was sending sexually explicit text messages and emails to teenage male congressional pages. Foley insisted he was not a pedophile and had never had sexual contact with any minor. Then he dipped into the media excuse bag and decided to used ALL of them at once: he blamed his emails on a drinking problem, checked himself into a rehab clinic, and said that he had been molested by a clergyman when he 13. To top it off, he decided that NOW was the time come out, and bravely had his lawyer inform the public that “Mark Foley wants you to know he is a gay man.” Many pages came forward after Foley’s announcement, but Florida officials closed the investigation citing “insufficient evidence” to file criminal charges. 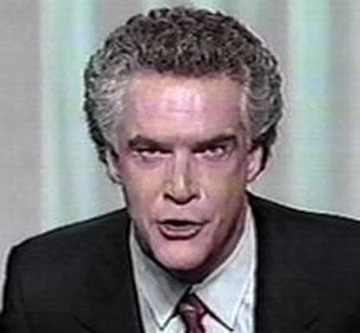 Robert Tilton is an American televangelist who achieved notoriety in the ‘80s and early ‘90s through his TV program Success-N-Life, a very slick and well rehearsed perversion of the “prosperity gospel”. Tilton promised that, for a $1000 pledge, he would personally lobby God on your behalf. All you would have to do was send in your check and he would pray over the very letter you sent him. Today, all of you know him as “The Farting Preacher”, but back in the day people sent their entire life savings to this guy. At its peak, Success N Life was in all 235 American TV markets, and was earning $80M a year, tax free. But in 1991, ABC News discovered Tilton’s ministry threw away prayer requests without even reading them, keeping only the money or valuables instead. When confronted with these claims, Tilton claimed that he would pray over computer readouts of prayer requests, or sometimes lay across piles of mail as he prayed (even claiming that chemicals in those letters gave him two “mini strokes” in his brain). Tilton sued ABC for libel in 1992, but the case was dismissed and his show was off the air by October 1993. He later resurfaced on Black Entertainment Television (BET) in the early morning hours. Ole Anthony, founder of the religious watchdog group the Trinity Foundation, said Tilton pays $50,000 per month for the air time, and estimates that Tilton’s ministry is grossing $24 million a year using reruns or repackaged versions of older shows. “With no production costs, a fraction of his former TV time budget, his net must rival that of the good old days with absolutely no effort on his part,” Anthony said. 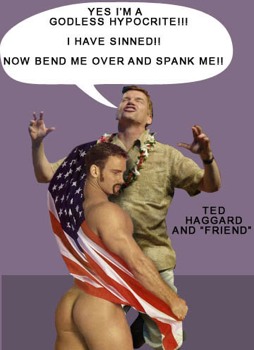 Ted Haggard is the founder and former pastor of the New Life Church in Colorado Springs, Colorado; a founder of the Association of Life-Giving Churches; and former leader of the National Association of Evangelicals (NAE) from 2003 – 2006. Haggard has condemned homosexuality, and under his leadership, the NAE stated that “homosexual activity, like adulterous relationships, is clearly condemned in the Scriptures.” Yet in November 2006, he “left” all of his leadership positions after he admitted soliciting a prostitute for homosexual sex and methamphetamine. After the scandal broke, Haggard entered three weeks of intensive “counseling”, overseen by four ministers who claimed to have converted him back to heterosexuality. When pressed, they backtracked and merely said Haggard is a “heterosexual with issues.” Ya think? 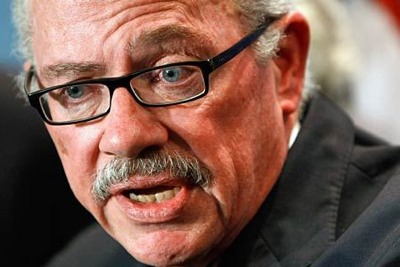 Hypocrisy: Opposing Abortion While Paying For An Abortion

Bob Barr, is a former member of the United States House of Representatives, representing Georgia’s 7th congressional district as a Republican from 1995 to 2003. He gained national attention as one of several leaders who successfully impeached President Bill Clinton. According to a sworn affidavit by Barr’s ex-wife Gail, the longtime abortion opponent paid for her abortion in 1983. Barr never publicly disputed the affidavit, and the author of the Defense of Marriage Act even invoked a legal privilege during his 1985 divorce so he could refuse any questions on whether he cheated on his second wife with his now-third wife. Barr has recently resurfaced as the Libertarian Party’s nominee for President of the United States (he lost). 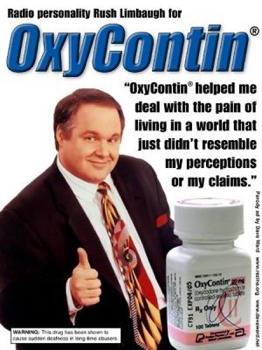 Rush Limbaugh is the host of “The Rush Limbaugh Show”, a nationally syndicated radio program devoted to conservative issues and news of the day. On his program, Limbaugh has espoused a deep respect of law enforcement and tough penalties for drug offenders (In 1995, he said drug users “ought to be accused and they ought to be convicted and they ought to be sent up.”) Yet on October 10, 2003, Limbaugh announced that he was addicted to prescription painkillers and would immediately check himself into a rehabilitation program. Law enforcement sources had noted that Limbaugh’s name had come up during an investigation into a black market drug ring in Palm Beach County, Florida, specializing in the illegal sale of prescription drugs OxyContin and hydrocodone. Limbaugh said he first became addicted to prescription painkillers following unsuccessful spinal surgery, but has remained clean since his 2003 treatment. Limbaugh was not incarcerated because Palm Beach does not jail drug offenders unless they’ve failed opportunities to deal with their addiction and have turned to crime to maintain their habit. Thus, benefiting from the soft position on drug crime that he hates so. 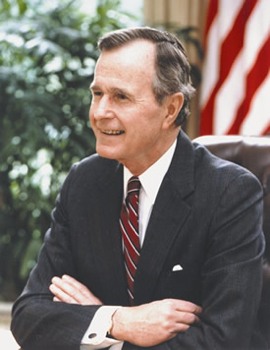 At the 1988 Republican National Convention, candidate George H.W. Bush famously said “Read my lips: no new taxes!”. It was a strong, bold statement, and the soundbyte resonated within the Republican party, which then backed him all the way to a successful election as the 41st President of the United States. Once in office, Bush refused several new tax initiatives from a Democrat controlled Congress, but ultimately relented, and agreed to increase the amount of existing taxes in the 1990 budget agreement. Rush Limbaugh went apoplectic and the general public was only slightly less enraged. While technically the taxes weren’t “new”, they were still “more”, and that’s not what his electorate him to do. Bill Clinton then used Bush’s quote to an easy victory in the 1992 presidential election. 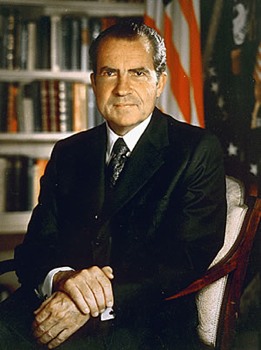 In 1973, Richard Nixon went on television and told the world “I am not a crook” as part of a total denial of involvement with the June 17th burglaries of the Democratic National Committee offices located in the Watergate Hotel. But he and other high ranking administration officials were actually eyes-deep in it. As a youth, Nixon was rejected by the FBI academy and later in life had to “settle” for President of the United States. This always ate at him, and he loved the cloak-and-dagger aspects of covert operations. Despite warnings to maintain plausible deniability, Nixon kept himself fully apprised of the break-in. Then journalists Robert Woodward and Carl Bernstein exposed the scandal in August 1972. The public disliked the burglary but loathed the cover-up even more, and popular sentiment led to impeachment processes that ultimately drove Nixon to resign the presidency. 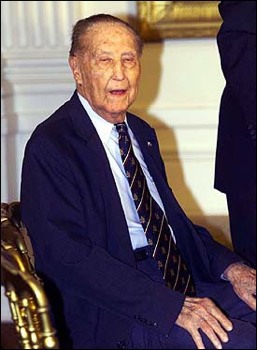 Hypocrisy: Blocking Civil Rights for His Own Child

When South Carolina Gov. Strom Thurmond ran for president in 1948 on the Dixiecrat ticket, he vowed to bar blacks from white schools, restaurants, and even some occupations. But at the same time he was preaching segregation, he was secretly financing the business administration degree of Essie Mae Washington, a black coed at the all-black South Carolina State College. Why? Because it is widely believed that Ms. Washington is his daughter. By supporting a black woman he supposedly sired, Thurmond considered himself remaining loyal to a Southern Gentleman’s code that required white boys, who often learned about sex “on the colored side of town,” to take care of any children they fathered. To his very death, Thurmond never confirmed nor denied Ms. Washington as his daughter, even when the headline: “SEN. THURMOND IS UNPRINCIPLED — WITH COLORED OFFSPRING — WHILE PARADING AS A DEVOUT SEGREGATIONIST” ran in the Edgefield Advertiser, where Ms. Washington went to school.