If you know anything about 1980s cartoons, then you know that He-Man and the Masters of the Universe was a half-hour commercial for Mattel’s Masters of the Universe toys. Pretty much the same could be said about Transformers and GI Joe — both of which were actually decent cartoons that unfortunately would later gear episodes around the latest character or vehicle to his the stores.

This list isn’t about those shows, however. The 1980s was filled with insipid creations capitalizing on wildly popular toys, movies and flavor-of-the-month stars. It had some great ones, of course. (My favorites were Robotech, Galaxy Rangers, Voltron, Sliverhawks, GI Joe and Transformers. Yep, I liked big robots and guns.) But the majority of them were turkeys. Why? Take any video game, popular show, person or toy and you can easily make a cartoon series about it. More correctly, you can make a quick buck and inflict mind-numbing insanity on helpless children who don’t know any better by taking a video game, popular show, person or toy and easily making a cartoon series out of it. This list presents the worst of the lot. If you weren’t a kid during the 1980s for whom TV was a grand babysitter, be very, very glad.

10
The Adventures of Pac-Man 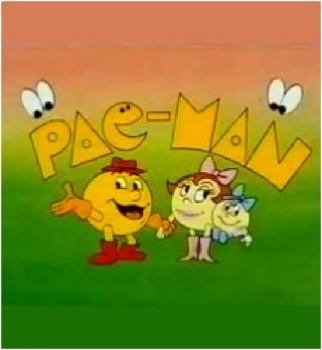 A yellow mouth floats around a maze than never changes, eats little dots and avoids capture by four ghosts. The more screens you clear the higher your score and the faster the four ghosts come at you. Sounds like the PERFECT concept for a kids show, don’t you think? Even when I was a member of the target audience, I thought The Adventures of Pac-Man was incredibly lame.

I’ll admit: I’m a fan of Lucas’ Star Wars: Clone Wars series that airs on Cartoon Network. (The movie, though — ugh.) SW: CW works because it takes one of the best aspects of the prequel trilogy—the Clone Troopers and their Jedi generals—and builds a series around it. (The early 2000s’ miniseries Star Wars: The Clone Wars also followed this template and was therefore excellent.) Not so with Star Wars: Ewoks, which took arguably the silliest part of the original trilogy, the Ewoks, and built a show around them. I’m one of those curmudgeons who didn’t buy the “teddy bears defeat the Empire” storyline in Return of the Jedi (even when I was a kid), and this show is just nauseating to Star Wars nuts like me. And the companion show, Star Wars: Droids, was actually respectable compared to this nausea-inducing show.

The Dukes of Hazard used to be one of the great dumb shows on TV. There were thrilling car chases, Daisy Duke, Uncle Jessie’s wisdom, Boss Hogg’s greedy schemes, Enos’ lovelorn looks, great lessons of right and wrong, a fabulous guest star most weeks… OK, OK, it was all about the car chases and Daisy Duke. So, what better way to capitalize on this cartoonish hit live-action show? Make it into a real cartoon. Not with Bo and Luke, but Coy and Vance — the cousins who showed up when Bo and Luke left Hazard County over contract disputes … er, to ride the NASCAR circuit. About the only redeeming thing about this travesty is that the original cast provided the voices. And when Bo & Luke returned to the actual show, their characters showed up on the cartoon.

Apparently, we nasty humans coveted the magic and technology of the Gummi Bears, and hunted them down and ate them in vast, fruit-flavored quantities. The remnants of that once proud, tasty civilization turned to fighting evil from their magical castle. Michael Eisner supposedly got the idea for this show while his son was eating Gummi Bears.

I pity the fool who hasn’t heard of this insipid excuse for a cartoon. (Sorry, couldn’t resist.) As the theme song sings — repeatedly — the show is about Mr. T. Well, sort of. T is the bodyguard/father figure for a travelling team of gymnasts who go from town to town, fighting bad guys with their unstoppable skills and learning a new life lesson every episode. And I LOVED it as a kid.

A hit video game became a bad cartoon and an even worse feature film. The Super Mario Bros. wrenched their way onto Saturday morning TV starting in 1989. Amazingly, celebrities would “stop by” to hang with brothers Mario and Luigi in the live-action segments of the show, including Vanna White, Magic Johnson and Sgt. Slaughter. If you listen to the bad rap theme in German, it actually sounds more comical than sad. http://www.youtube.com/watch?v=Qp1Lbmutry0

4
Rambo and the Forces of Freedom
Rambo Animated intro

Hey, I’ve got a great idea for a kid’s show: Let’s feature a mentally unstable Vietnam Vet who is a one-man killing machine, able to take out hundreds of National Guardsmen and NVA in a single swoop. We’ll have many explosions and bad guys getting shot, dismembered, sliced open. Heck, yeah, the body count will be awesome! Oh… Too much? Tone it down? OK, let’s just make a Rambo cartoon as a cheap GI Joe-wannabe where no one ever gets hurt. We’ll still have explosions and we’ll still have Stallone’s huge knife that could gut an elephant but we’ll never, ever see it get bloody. And get this: The name of Rambo’s primary enemy is so secret that “secret” is in the name: S.A.V.A.G.E., which stands for Secret Administrators of Vengeance, Anarchy and Global Extortion. That’s the kind of name that gets you beat up in Evil Villain High School.

Can you dig it, man? Owww! As the great (“great?” Hmm) Wolfman Jack narrates, The Fonz, his dog “Mr. Kool” (seriously) and a “future chick” named Cupcake get zapped through time in a time machine. Helping them “get back to 1957” are Ralph Malph and Richie (apparently, Potsie was smart enough to avoid this farce). Ugh. Do you remember when Fonzie literally jumped the shark on the real Happy Days? This is much worse.

Do you remember how the Professor could build a radio from a coconut but couldn’t make a simple patch for a boat? Well, turns out he could build a spaceship, which takes the dippy seven off the island to a planet far, far away. The entire original cast is back (except Tina Louise, who fancied herself as an important actress well before getting stranded in TV rerun-land). And, as usual, our intrepid castaways meet strange and exciting people each week—but still can’t get off the island, er, planet, because the Professor’s skill with spaceship repair is about as good as it is with boat repair. Yes, it’s that silly. No, wait: The theme song is even sillier.

Great idea for a cartoon: A show built around a wildly popular cube-shaped puzzle that most people could solve only by taking it apart. Except in the cartoon, the cube has magical powers! With all due respect to the show’s creators, this has to be the most ridiculous concept for a children’s cartoon EVER. Even the theme was by the awful ’80s boy-band Menudo (the starting point for Ricky Martin). I can’t say any more. Just watch the intro clip.

Notable extras: She-Ra: Princess of Power, a half-hour commercial for a toy line spun off a successful cartoon made about a toy line; Hulk Hogan’s Rock ‘n’ Wrestling, a cartoon about a cartoonish “sport”; Police Academy; The Garbage Pail Kids (lasted only a couple of episodes and never seen in the U.S.); and My Little Pony, a marketing tie-in as nakedly transparent as He-Man.