The 18th and 19th centuries saw a growth in a whole range of clubs. Gentleman’s clubs, like White’s, flourished everywhere. Special interest societies sprang up. Whatever your hobby, interest, religion, or political persuasion, there was a club for you.

It was almost as if people didn’t want to go home.

The dining club, however, offered a particular experience. Good food, sophisticated conversation, brandy, cigars, and, most of all, discretion. But some clubs went further. They sought to combine intellectual interests with food.

As their members had wide-ranging and sometimes downright peculiar interests, the combination didn’t always work. 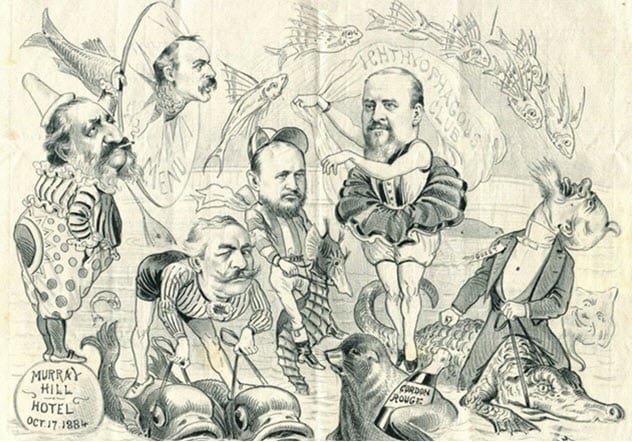 The Ichthyophagous Club was one of the more unusual dining clubs in New York. It met from 1880 to 1887. The club held an elaborate annual banquet with the purpose of eating as many unusual marine creatures as possible. Their goal, they said, was to prove that there was a whole variety of edible creatures that were going uneaten, which they felt was a shame.

Club members included fishing experts (but not fishermen, who were considered to be too low-class), foodies, journalists, and writers. The first dinner was reported in the The New York Times and was said to include moonfish cooked Spanish-style, sea robin fish, and a lettuce salad.

By the third year, they were serving dolphin steaks, lamprey eels (complete with teeth) rolled in breadcrumbs, and dogfish shark croquettes. Their final banquet included 15 types of sea creatures, ranging from conventional salmon to stewed terrapin.[1]

It was said that dolphin tasted particularly unpleasant. However, alligator steak went down well and starfish soup was a hit. The club had its own song, which praised the variety of the ocean and the bravery of the man prepared to eat his way across it.

Ultimately, the club did not last. Could it be that the members couldn’t stomach the thought of more ruddy fish? 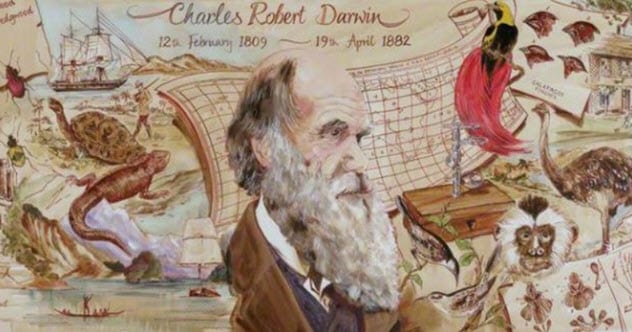 The Glutton Club was not founded so that members could stuff their faces with as much food as possible. Rather, members gathered to try “strange flesh.” Which sounds even more disturbing.

Under the presiding eye of a young Charles Darwin, the club sought to try out new foods. They began by eating fowl and tried hawk and bittern. But, after a particularly tough and stringy owl, they moved on to meat instead.

Darwin continued his adventurous eating habits during his travels by eating armadillo and some unidentified animals. It seemed that nothing was off-limits. One evening, however, he jumped up in the middle of dinner when he realized that he was eating a rare bird. He scraped up the leftovers and took them away to study.[2] 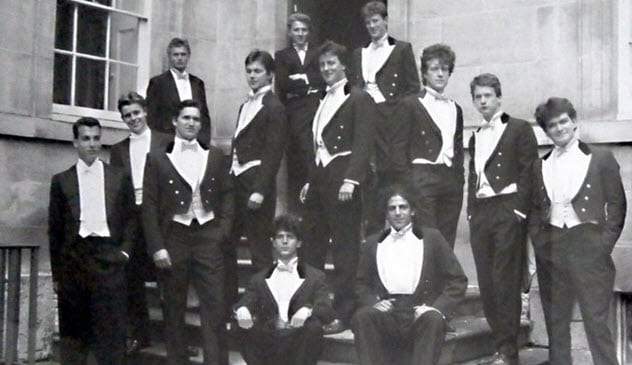 The unsavory thing about the Bullingdon Club was not so much the food as the membership. Founded in the 18th century, the organization opened its membership only to select Oxford undergraduates who had enough money and connections to buy their way out of trouble.

The dining club soon developed a reputation for lavish feasts, huge alcohol consumption, and vile behavior. The rich aristocrats vandalized both private and university property, abused the staff who cooked for them, sexually harassed the waitresses, trashed the restaurants, and engaged in bizarre and illegal dining rituals.

Although the club still exists today, its membership has dwindled—most recently due to the publicity surrounding the initiation ritual of a British prime minister who had once been a member of the club. Though the details are unclear, the ceremony was believed to have included a pig’s mouth, an open zipper, and a certain part of the prime minister’s anatomy.[3] 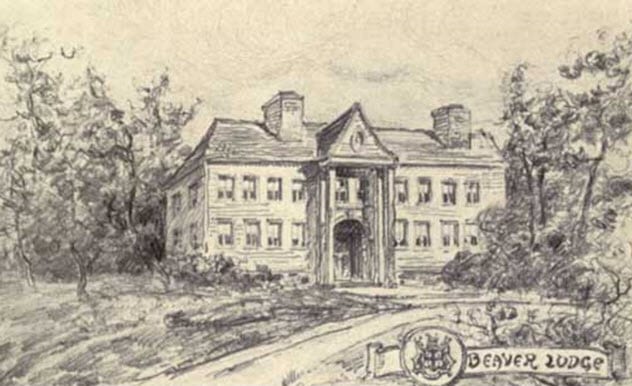 The Beaver Club was founded in Canada in 1785 with membership restricted to fur traders. To become members, candidates had to have overwintered in the harsh Northwest Territories and be upstanding citizens.

The club met once every two weeks. Once a year, they had a large banquet, which all members were expected to attend. It was one of those clubs with a lot of rules. Attendance at the dinners was compulsory unless someone was indisposed by reason of illness or business.

Members were encouraged to recount stories of the hardships and dangers that they had endured during their travels, all while wearing their ostentatious club medals and making toasts to “the fur trade in all its branches.”

At the meal, pemmican was served. It was a mix of dried buffalo meat, berries, and fat. Pemmican was a staple food of these voyageurs while out in the wilderness. At the club, however, it was served on silver platters in a luxurious dining room.[4]

At the end of the evening, these hardened fur traders sat on the floor in a row, as if in a large canoe, and pretended to row their imaginary boats while singing masculine songs. 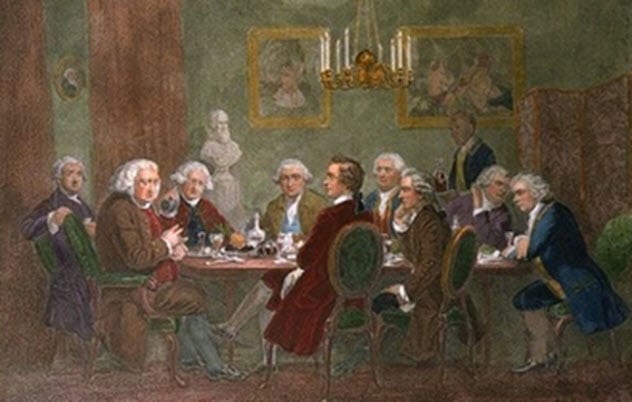 In 1764, writer Samuel Johnson and artist Joshua Reynolds set up their own dining club for artistic and literary gentlemen. With the aim of providing good food and even better conversation, the group originally consisted of fewer than a dozen men, all of whom were “good fellows.”

The club’s motto was: Esto perpetua (“Let it be perpetual”). This sounded impressive, but no one seems to know what it meant.[5]

The club met in the Turk’s Head Tavern in Soho, London, and members ate a hearty supper followed by lots of talking and drinking. Membership continued to grow, much to the disgust of the founding members. They were particularly annoyed by the intake of politicians, which seemed to put the founders off their food. 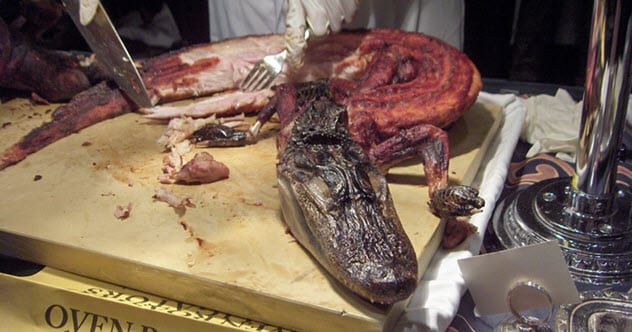 In 1904, a group of adventurers decided to form their own club in New York with the aim of promoting adventure and conservation. Members have included pioneers who were the first to climb Mount Everest, walk on the Moon, and dive to the deepest depths of the ocean.

The Explorers Club has a number of strange artifacts, including a “Yeti scalp” and the remains of a four-tusked elephant. Once a year, the organization holds a dinner for members and guests. These dinners have given a whole new meaning to the term “exotic food.”

The meals are prepared by the finest chefs and include such delicacies as tarantula and big game animals. However, in 1951, the club caused controversy when it was discovered that they were eating meat from a frozen woolly mammoth that had been found in Alaska.

The mammoth was supposed to have been discovered by an explorer with the nickname “Glacier Priest.” A sample of the meat was kept in a museum and was later DNA-tested. It turned out that the meat was actually from a green sea turtle.[6]

The Explorers Club exists today, and the annual banquet still occurs. However, woolly mammoth is not on the menu. 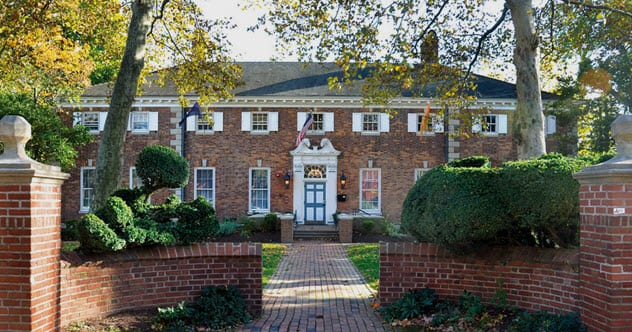 Princeton University is known for its large number of eating clubs. Its traditional application process, called “Bicker,” still occurs. The first official club, known as Ivy, was formed in 1879.

Applicants must undergo 10 one-on-one interviews with members on a variety of subjects. Then the entire club of over 100 members votes on the prospective candidate. To be admitted, the candidate must receive 100 percent of the votes, which is quite a task.

The idea of the eating clubs began when a group of wealthy undergraduates, unimpressed by the meager offerings on campus, decided to arrange their own meals. They rented rooms in Ivy Hall, hired a cook and waitress, and bought themselves a billiard table for after-dinner entertainment.

Today, Princeton has 11 eating clubs, which still use the “Bicker” process to weed out applicants.[7] 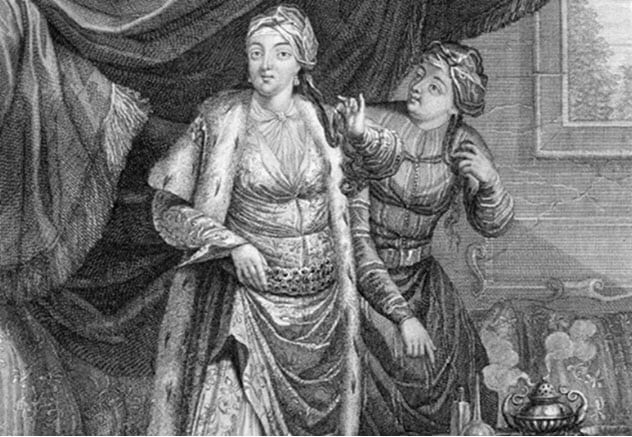 The Divan Club was established in 1744 by John Montagu, 4th Earl of Sandwich, and Sir Francis Dashwood. Membership was available only to those who had visited the Ottoman Empire. In fact, the club took its name from the Turkish word for a council or meeting of rulers. The purpose of the club was to allow members to talk about their experiences in the East.

After dinner, the members would make the club toast, “To The Harem.”

The club lasted less than two years. It is thought that the main reason for the organization’s demise was that the entry criteria were so strict that almost no one qualified for membership.[8] 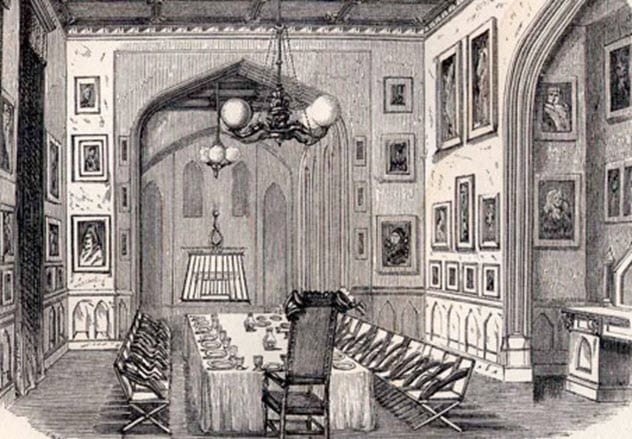 During the 18th and 19th centuries, several dining clubs bore the name Beefsteak Club. The steak was seen as a patriotic symbol and was especially associated with the liberal politics of the Whig Party.

The first of these clubs was founded in 1705, and its full title was The Sublime Society of Beef Steaks. It was immediately successful, and its membership included the great, the good, and the royal.

Meetings were held weekly. Members wore blue coats and buff waistcoats with brass buttons with the words “Beef and Liberty” impressed on them. Dinner was always steak with baked potatoes and was accompanied by large amounts of port.

More Beefsteak Clubs were opened, each having its own rules and its own membership. But all of them upheld the importance of liberty and the sublimeness of beef in steak form. Though the club died out during the 19th century, it was re-formed in 1966 and has met continuously since.[9] 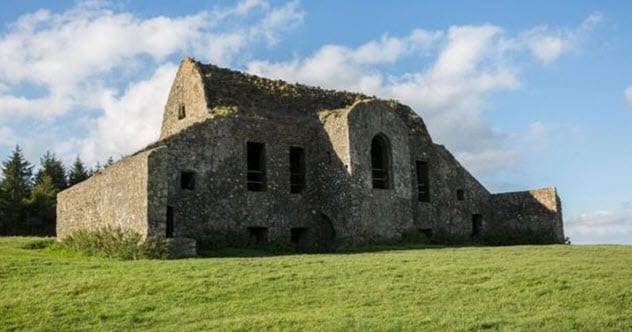 The Hellfire Club—or, to use its less catchy official name, Order of the Friars of St. Francis of Wycombe—was started in the mid-18th century by Sir Francis Dashwood (yes, the man who also started the Divan Club). He bought an old Cistercian abbey to use as a meeting house.

The abbey was ideal as it allowed him to express his deep hatred of Roman Catholics by dressing up and being silly. He devised the club and its rituals to be a mockery of the Catholic Church. In fact, the club’s rituals were deliberate pseudo-religious mumbo jumbo.

Twice a year, the organization held a chapter meeting. Members wore hats that were a cross between a beret and a clown’s hat and had the words “Love and Friendship” embossed on the front.

The men sat over sumptuous and extravagant dinners and were encouraged to bring ladies “of a cheerful, lively disposition.” Club members were called “monks,” and their female companions were considered to be their “lawful wives,” at least for the duration of their visit.

On one occasion, a member smuggled into the chapel a baboon dressed as a devil and hid it inside a cope chest. During the ceremonial portion of the evening, the baboon was released. No doubt having been terrified at being shut in, the baboon promptly rampaged through the chapel.

The animal leaped onto Lord Sandwich. Thinking he was about to be dragged down to hell, Sandwich suddenly found religion and, to the merriment of all, made a full confession of his sins.

In 1762, Dashwood was appointed Chancellor of the Exchequer. It suddenly occurred to him that the public might not appreciate the humorous nature of the club in quite the way he did. He wound up The Hellfire Club, stripping the abbey of any sign of the organization’s presence.[10]

Read about more bizarre clubs on Top 10 Bizarre Clubs From The Past and 10 Very Ungentlemanly Gentlemen’s Clubs.