Several trades and professions around today are much different than when they first appeared. In fact, many have changed so much that their origins would be hard to imagine. Who would believe that the world’s first airline did not have airplanes? That the first gas station was a pharmacy? Or that funeral homes operated the first ambulances?

Many trades and professions often have weird origins because they began as offshoots of other businesses. Others only got defined and structured long after they first appeared. At other times, advances in technology just introduced some new ways of doing things. 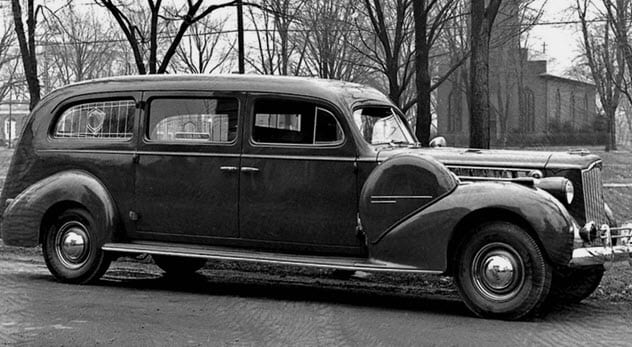 Funeral homes launched the first ambulance services when they helped to evacuate the wounded to hospitals during the US Civil War. The early ambulances only had a stretcher, a blanket, and a bottle of whiskey as anesthesia. Later alterations included oxygen. The personnel on board also learned some lifesaving medical procedures, making them the first paramedics.

The ambulances were actually hearses—the same ones used by funeral homes to transport dead people to cemeteries. The hearses worked because regular horse-drawn carriages were not long enough to allow the patients to lie down.

However, the funeral homes were not really interested in saving lives or even in the money they charged their clients. Over half of their clients never even bothered to pay. The real profit was in the death of the client because the funeral home that provided the ambulance was the likeliest to receive an offer to arrange the burial.

Funeral homes stopped providing ambulance services after Congress passed the Highway Safety Act in 1966. The act set regulations over what sort of vehicles could be used as ambulances. It also required ambulances to be staffed by trained personnel. The funeral homes could not meet the regulations and left the business for hospitals and other operators.[1]

9 The First Gas Station Was A Pharmacy 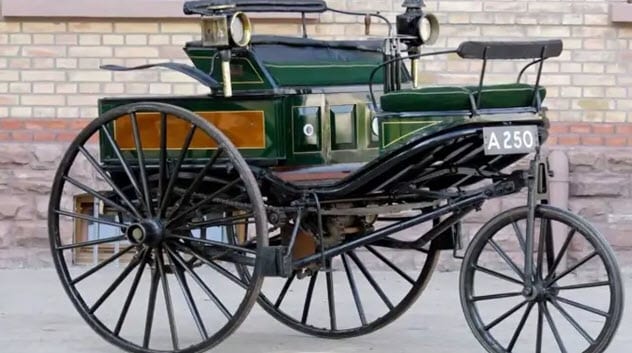 In early August 1888, Bertha Benz (the wife of Karl Benz, who invented the first practical automobile) completed the first road trip in a motorcar when she and her two sons traveled from Mannheim to visit her mother in Pforzheim, Germany. The car was the Patent-Motorwagen No. 3, which was built by her husband.

At the time, Karl Benz had problems marketing the vehicle. When Bertha suggested that they make a road trip to publicize the car, he refused. Undeterred, Bertha and her two sons went without her husband’s permission. Karl only realized what had happened when he saw her letter informing him that she had left for her mum’s.

The vehicle broke down several times, but Bertha handled the repairs. However, her greatest challenge arose when she ran out of fuel. She walked to a local pharmacy where she purchased Ligroin, a petroleum solvent that was used as fuel at the time. The pharmacy had the stuff because it was used for cleaning surfaces.

That pharmacy in the town of Wiesloch is considered the first filling station in the world. In keeping with the tradition, other pharmacies stocked up on Ligroin and then gasoline and sold these products to car owners until the first gas stations appeared. For Bertha, her trip made the news and popularized her husband’s car as a reliable means of transportation.[2]


8 The First Motels Were Unbelievably Luxurious 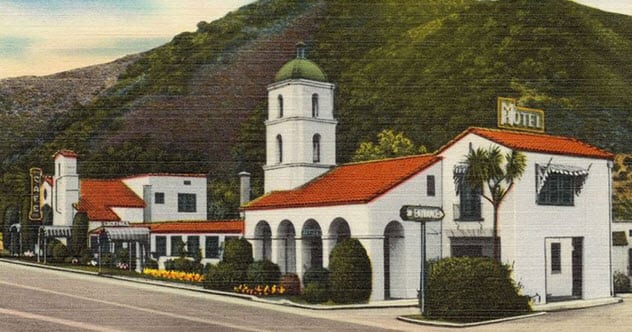 Motels are often less expensive than budget hotels even though motels were never intended to be cheap. In fact, the first motels were actually hotels with parking garages for car owners. That’s why they were called “motels” (motor hotels).

Arthur Heineman built the first one in 1925. Vehicles were becoming mainstream in the US at the time, and Heineman had observed that conventional hotels did not have enough parking spaces for traveling drivers. So he built the first motel at San Luis Obispo, which is between Los Angeles and San Francisco. He called it the Milestone Mo-Tel Inn.

It consisted of several bungalows with garages that could accommodate up to 160 people in total. Lodgers paid $1.25 to sleep in one of the rooms for a night. Car owners parked their vehicles in the garages while they slept in nearby rooms. The motel also had separate rooms for chauffeurs in case the car owner had one.

Heineman spent $80,000 to build his motel. It had central heating, showers, a bell tower, and other expensive features that are alien to today’s motels. He planned to build a chain of 18 motels in California alone. However, the Great Depression soon came along, forcing him to slow down on his plans.

By the time it was over, several competitors had sprung up to steal a share of the market. They engaged in price wars that quickly turned motels into budget lodges without luxurious facilities.[3]

7 The World’s First Airline Used A Fleet Of Airships 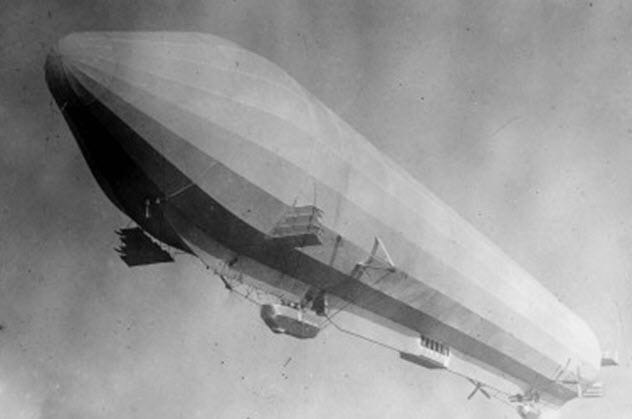 Deutsche Luftschiffahrts-Aktiengesellschaft (“German Airship Transportation Corporation Ltd.”), aka DELAG, was the world’s first airline. It was founded on November 16, 1909, as a subsidiary of the Zeppelin Company, the German airship maker. Little wonder that it had a fleet of airships in place of airplanes.

However, DELAG did not provide scheduled flights until 1919 when it started to operate flights between Berlin and southern Germany. Until then, it operated tour flights for sightseers who wanted to view the Earth from high above. 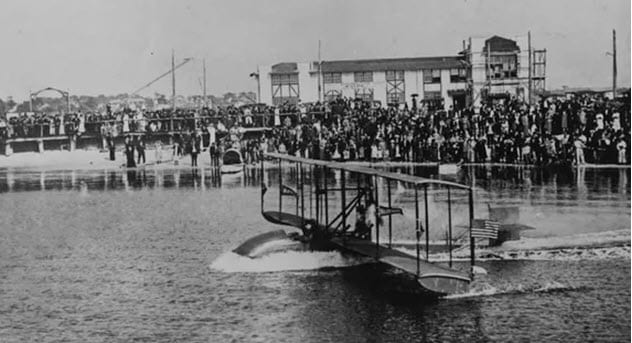 The airline offered regular flights from St. Petersburg to Tampa, Florida, using a two-seat airboat called the Lark of Duluth. An airboat is an airplane that lands and takes off from water. The Lark of Duluth had just two seats. The pilot sat in one while one or two passengers were cramped in the other. The airplane itself skirted just 1.5 meters (5 ft) above the water.

The St. Petersburg–Tampa Airboat Line made its first flight on January 1, 1914, and the passenger was Abram C. Pheil, the former mayor of St. Petersburg. Pheil got the seat after winning a $400 auction. Later passengers paid $5 for a single trip.

The St. Petersburg–Tampa Airboat Line was a success because it made the 29-kilometer (18 mi) flight in just 23 minutes. At the time, steamships covered that distance in two hours, trains in 4–12 hours, and cars in 20 hours. However, the airboat line could not remain in business and shut down in 1914.[5] 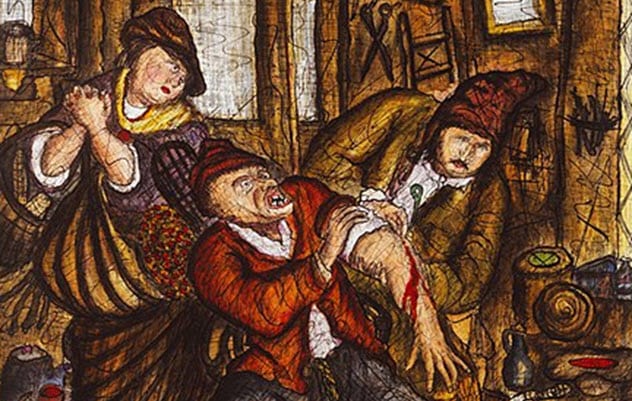 Barbers doubled as surgeons until a few centuries ago. Both professions were so closely linked that they had a single association called the Company of Barber-Surgeons from the 16th to the 18th centuries. The barbers often treated medical ailments like syphilis, which physicians of the day wanted nothing to do with. Barbers also helped to remove painful teeth, which technically made them dentists.

Many barbers performed bloodletting, the now-obsolete and disproved act of draining blood from a person to expel diseases from the body. Some say that this is why barbers often have red-and-white poles outside their shops. The red represents the blood while the white is the bandage. However, this theory is disputed.

Nevertheless, we know that barbers often advertised their bloodletting services by leaving bowls of blood in their windows. Several surgeons were not comfortable with the barbers and desperately wanted to separate their trade from the barbers. The surgeons got their way in 1745 when the Company of Barber-Surgeons was split.[6]


4 The First Newspapers Were Books 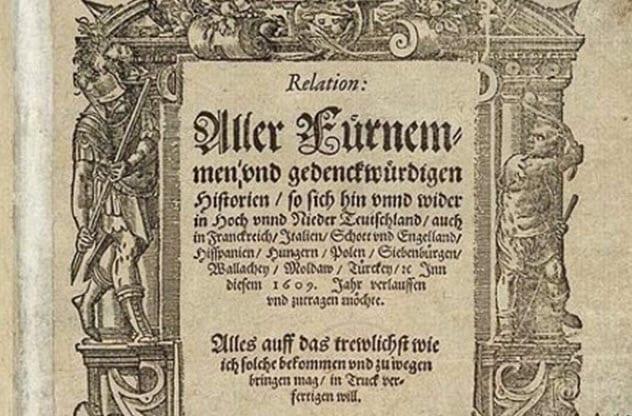 Newspapers have existed as pamphlets, corantos, and newsbooks for centuries. However, the direct predecessors of modern newspapers are newsbooks. Made of several news pamphlets bound together to create a small book, they were published like regular books and even had title pages.

Unlike modern newspapers that report a variety of news stories, the newsbooks and pamphlets often only reported single events like battles, disasters, and celebrations. However, what we consider the first newspaper was published by Johann Carolus and sold in the city of Strasbourg, Germany, in September 1605.

Carolus called his newspaper Relation aller Furnemmen und gedenckwurdigen Historien. Like its predecessors, it was also a newsbook. However, it reported a variety of news. Carolus’s weekly newspaper was 4–6 pages long.[7]

3 The First Movie Was Only 2.11 Seconds Long

We expect our movies to run for around two hours these days. Interestingly, the first movie ran for only 2.11 seconds. Yes! That was no mistake. 2.11 seconds. The movie was titled Roundhay Garden Scene and was produced by French inventor Louis Le Prince in 1888.

Roundhay Garden Scene was a video of Louis’s son Adolphe and several friends and relatives walking around a garden. Louis Le Prince created the film while testing a new video camera he had invented.

To be clear, an earlier film titled The Horse In Motion was created in 1878—a full 10 years before Louis Le Prince made his movie. However, The Horse In Motion is not considered a real film because it was produced with several photo cameras timed to shoot as a horse galloped past. The photographs were later blended into a single video.[8] 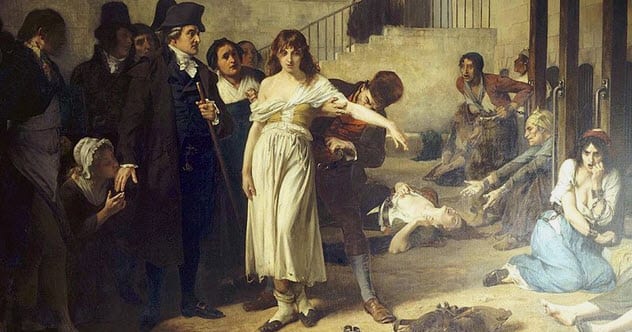 Early psychiatric hospitals were called lunatic asylums. They were private for-profit businesses run by cruel entrepreneurs who were more interested in profits than the health of their patients. The patients were treated with disdain and kept in terrible conditions that rivaled prisons.

Before the first lunatic asylums appeared, mad people were often kept in homes where their conditions were managed by their relatives. However, this was no easy task. Many families experienced some relief when the first private for-profit lunatic asylums sprang up in the 1600s.

The operators of these asylums used crude methods on their patients. They held them down with irons and applied the same brutal methods used on stubborn horses to keep their patients under control. Several churches operated more decent, nonprofit lunatic asylums. But they could not take enough patients. So most families just sent their mentally deranged relatives to these for-profit lunatic asylums.

These facilities went into decline when more decent lunatic asylums started to appear in the 1790s. The for-profits finally went out of business when the government started to build lunatic asylums in the 1800s. These places were later renamed psychiatric hospitals.[9]

1 Priests And Medicine Men Were The First Barbers 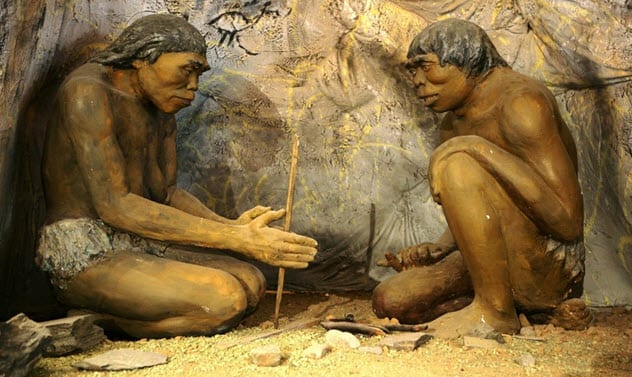 Barbering dates to over 6,000 years ago when priests and medicine men started the side job of cutting hair. At the time, people believed that spirits could enter the body through the head. So getting a haircut was considered a religious rite.

People often let their hair grow long enough to allow the good spirits in. Then they held elaborate religious ceremonies where the hair was cut to lock the good spirits in and keep the bad ones out. The superstition seemed to have died off during the ancient Egyptian Empire when people regularly shaved their heads to keep clean because they sweated a lot.[10]

Read more fascinating facts about the origins and endings of certain professions on 10 Common Professions With Secretly Fascinating Origins and 10 Iconic Professions That Have Almost Vanished.