Torture: it is an ancient practice that still goes on today. In the middle ages torture was used for punishment, interrogation, and deterrence. It is easy to consider ourselves more humane these days, but while some of the devices listed here would lead to death, we have, in modern times, mastered the ability of inflicting extreme pain for indefinite periods of time – something which is, perhaps, worse.

SEE ALSO: 10 Torture Murders That Will Curdle Your Blood 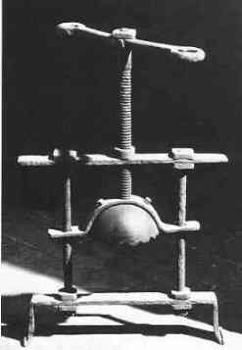 With the head placed under the upper cap and the chin placed above the bottom bar, the top screw of this awful device was slowly turned, compressing the skull tightly. First the teeth are destroyed, shattering and splintering into the jaw. Then the eyes are squeezed from the sockets – some versions had special receptacles to catch them. Lastly, the skull fractures and the contents of the head are forced out. In earlier stages, the torturer could keep the head firmly clamped and strike the metal skull cap periodically; each blow echoing pain throughout the victim’s body. 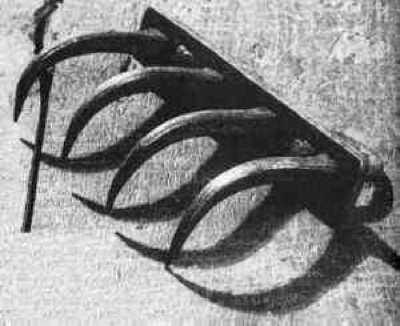 The Cat’s Paw (or Spanish Tickler) was oftentimes attached to a handle; in size and appearance it was an extension of the torturer’s hand. In this way it was used to rip and tear flesh away from the bone, from any part of the body. 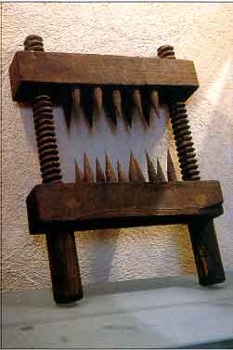 A popular torture device during the Inquisition, the knee splitter does what it says: split victims’ knees and render them useless. Built from two spiked wood blocks, the knee splitter is placed on top of and behind the knee of its victims. Two large screws connecting the blocks are then turned, causing the two blocks to close towards each other and effectively destroy a victim’s knee. This device could also be used to inflict damage on other parts of the body such as the arms. 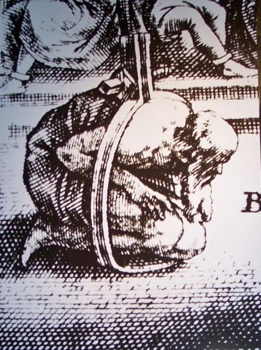 The Scavenger’s Daughter was invented as an instrument of torture in the reign of Henry VIII by Sir William Skevington (also known as William Skeffington), Lieutenant of the Tower of London. It was an A-frame shaped metal rack to which the head was strapped to the top point of the A, the hands at the mid-point and the legs at the lower spread ends; swinging the head down and forcing the knees up in a sitting position so compressed the body as to force the blood from the nose and ears. The Scavenger’s Daughter was conceived as the perfect complement to the Duke of Exeter’s Daughter (the rack) because it worked the opposite principle to the rack by compressing the body rather than stretching it. 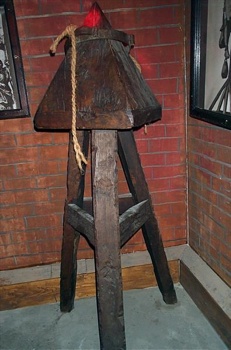 This procedure has remained essentially unchanged from the Middle Ages until today. The victim is hoisted up and lowered onto the point of the pyramid in such a way that his weight rests on the point positioned in the anus, in the vagina, under the scrotum or under the coccyx (the last two or three vertebrae). The executioner, according to the pleasure of the interrogators, can vary the pressure from zero to that of total body weight. The victim can be rocked, or made to fall repeatedly onto the point. The Judas cradle was thus called also in Italian (culla di Giuda) and German (Judaswiege), but in French it was known as la veille, “the wake” or “nightwatch”. Nowadays this method enjoys the favour of not a few governments in Latin America and elsewhere, with and without improvements like electrified waist rings and pyramid points. Similar to the Judas Chair – but probably worse, is the Spanish Donkey:

The Spanish Donkey was a device which consisted of a main board cut with a wedge at the top fastened to two cross-beams. The naked victim was placed astride the main board as if riding a donkey, and various numbers of weights were attached to his or her feet. The agony could be ‘fine-tuned’ by using lighter or heavier weights. Sources relate that on occasion, the wedge would slice entirely through the victim as a result of the immense weight attached to his or her feet. 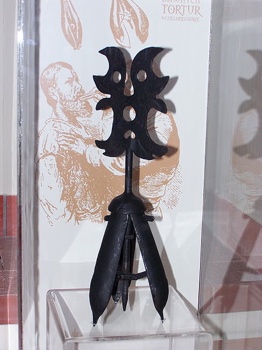 These instruments were used in oral and rectal formats, and in the larger vaginal one. They are forced into the mouth, rectum or vagina of the victim and there expanded by force of the screw to the maximum aperture of the segments. The inside of the cavity in question is irremediably mutilated, nearly always fatally so. The pointed prongs at the end of the segments serve better to rip into the throat, the intestines or the cervix. The oral pear was often inflicted on heretical preachers, but also on lay persons guilty of unorthodox tendencies; the rectal pear awaited passive male homosexuals, and the vaginal one women guilty of sexual union with Satan or his familiars. Pictured above is a version of the choke pear called the “Pear of Anguish”.

The lead sprinkler was essentially a ladle on the end of a handle. The top half of the sphere could be removed and the lower half was filled with molten metal, boiling oil, boiling water, pitch or tar. The perforated top half was then re-attached. Shaking or flicking the sprinkler towards the victim showered him or her with the boiling contents of the ladle. The victim had, of course, been pinioned in advance. 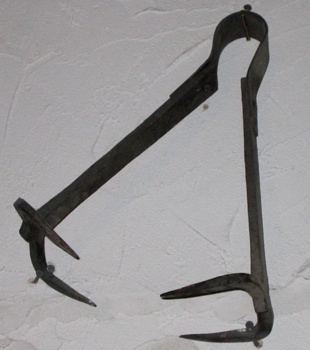 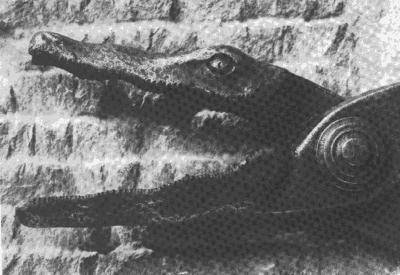 The crocodile shears was an instrument of torture used in late medieval Europe and typically reserved for regicides – those who attempted (and, perhaps, succeeded) to assassinate the king. The shears were made of iron and were based upon the concept of pincers, but—instead of standard jaws or blades, crocodile shears ended in a pair of hemicylindrical blades that, when closed together, formed a long, narrow tube. The insides of the blades were generously lined with teeth or spikes. After being heated red-hot, the crocodile shears were applied to the erect penis, which—once exposed to sufficient tension—was torn from the prisoner’s body; or at the very least leading to severe arterial bleeding.