When some people think of bikers they most often think of the stereotypical of dirty, leather clad men with shaggy beards covered in road dust riding around the country wreaking havoc and getting into barroom brawls. The truth is that most bikers are not rowdy trouble-makers and are in fact honest, law-abiding, hard working people.

However, there are small numbers of bikers who refer to themselves as “1%ers”. “One percenter” motorcycle gangs have been given this label because it is purported within motorcycle club circles that 99% of all bikers live within the boundaries of the law. Then there is the other 1% who rejects main-stream norms and live outside of the law, often engaging in highly criminal activity. This list takes a look at 10 American “1%er” biker gangs and highlights some of each gang’s alleged criminal activity.

It is important to note that although some of the members of these motorcycle clubs/gangs have been arrested, tried and convicted of various crimes not every member of the following clubs engage in criminal acts. 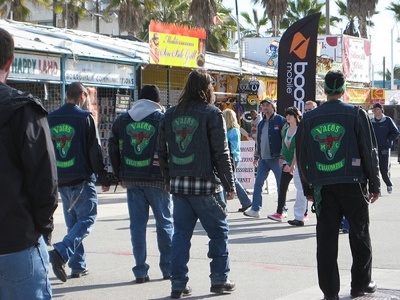 The Vagos Motorcycle Club was started in San Bernardino, CA in the 1960’s. Members of the club often wear green and bear a patch of the Norse god Loki riding a motorcycle. The club has approximately 24 chapters spread across the western United States in states such as Arizona and Nevada and also 3 in Mexico.

The Vagos have been the subject of several investigations by the FBI and the ATF for illegal activity such as the production and distribution of methamphetamine, murder, money laundering and weapons violations. A highly coordinated investigation in March of 2006 led to the arrests of 25 Vagos members and their associates in what has been labeled as the largest investigation in Southern California’s history.

Read about the bloody life of the Crips from someone who lived it himself. Buy Monster: The Autobiography of an L.A. Gang Member at Amazon.com! 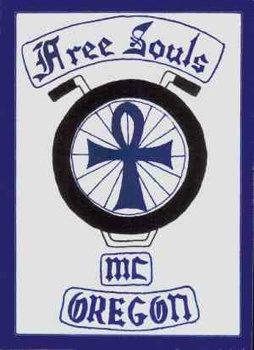 On May 2, 2007, three members of The Free Souls Motorcycle Club were arrested and charged with various crimes. Amongst the evidence were illegal drugs, weapons and stolen motorcycles all of which were seized as part of the investigation and arrests. 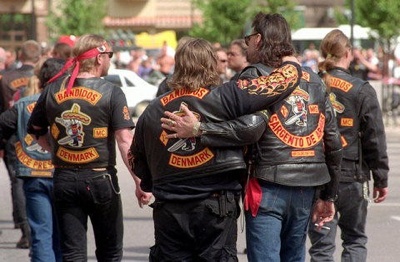 Founded in San Antonio, TX in 1966 The Bandidos are among the more notorious of American Motorcycle Clubs. The gang’s patch bears a cartoon-ishly obese Mexican wearing a large sombrero and carrying a machete in one hand and a pistol in the other. The colors of gold and red were adopted as the club’s colors due to the fact that their founder was a former Vietnam Marine veteran. The Bandidos have around 90 chapters spread across the U.S. alone, but they have also branched out as far as Asia, Germany and Australia.

The Bandidos gang has a long and brutal history of illegal activity. A member of The Bandidos was arrested, tried and convicted of the 2006 murder of a well known flyweight boxer and a member of the rival Hell’s Angels Motorcycle Club was sniped while leaving a restaurant in March of that same year during The Bandidos 40th Anniversary of the clubs annual birthday celebration. Police suspect that members of The Bandidos are responsible for the murder. Other members have been arrested from anything from murder to drugs and illegal weapons possession as well as assault and racketeering charges. 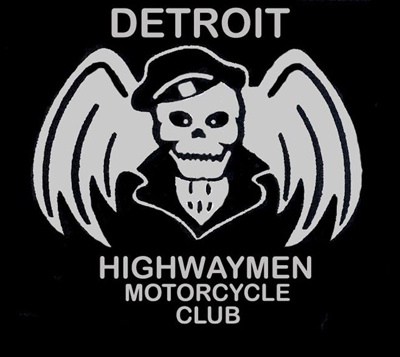 The Highwaymen were formed in Detroit, MI in 1954. Their chapters have spread across the state of Michigan as well as other U.S. states and have reached as far as Norway and England. Their club colors are black and silver and their insignia is a winged skeleton wearing a motorcycle cap and a leather jacket. The Highwaymen also have their own mottos which are: “Highwaymen Forever, Forever Highwaymen” and “Yea, though we ride the highways in the shadows of death, we fear no evil, for we are the most evil mother fuckers on the highway.”

Despite being the largest motorcycle club in the city of Detroit, they are not acknowledged in the Detroit Federation of Motorcycle Clubs due to their violent and criminal reputation. In May 2007, after a two year investigation into the gang’s activities, the FBI raided homes and chapter clubhouses resulting in the arrests of 40 Highwaymen and associates. The charges included insurance and mortgage frauds, murder for hire, cocaine trafficking, police corruption and racketeering. 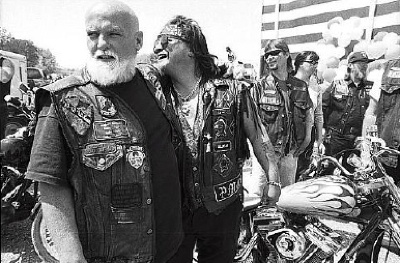 The Warlocks were founded in 1967 in Philadelphia, PA and gained a large number of members after the end of the Vietnam War. Consisting only of white males, The Warlocks have spread through the state of Pennsylvania and a good portion of the northeastern United States and also have chapters in the southeast United States as well as overseas in Germany and England. Their club colors are red and white and they use the Greek mythological figure of a winged Harpy as their insignia. Members often adorn themselves and their vests with white supremacy insignia as well.

In 2008, Tommy Zaroff, a former President of the Bucks County, PA chapter was arrested on suspicion of possessing 10 pounds of methamphetamine. In October of the same year four members of The Warlocks were arrested and charged with producing, transporting and distributing methamphetamine throughout Berks and Montgomery Counties in Pennsylvania. It is alleged that they sold over 500 lbs. of methamphetamine worth approximately $9 million. 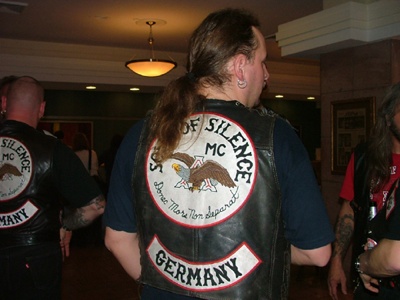 The Sons of Silence are another “1%er” motorcycle gang that was founded in Niwot, Colorado in 1966 and featured in a 2009 episode of Gangland on The History Channel. Since 1966 The Sons of Silence have spread across the United States, with concentrations in the eastern U.S. They also have several chapters spread throughout Germany.

The Sons of Silence have adopted the motto “Donec Mors Non Seperat”, which is Latin for “Until Death Separates Us”. The club patch has been adopted from the American Eagle logo used by the Budweiser beer company and bears an eagle superimposed over the letter A with their motto underneath.

In October of 1999, 37 members of the Sons of Silence were arrested on drug trafficking and illegal weapons charges during one of Denver’s largest federal undercover operations. During the raids, The ATF seized 20 lbs. of methamphetamine, 35 firearms, four hand grenades, 2 silencers as well as cash and motorcycles. 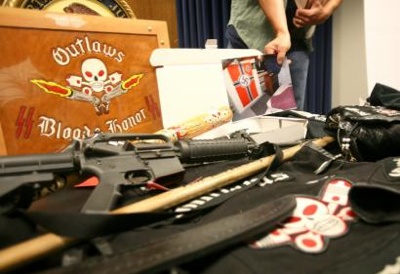 The Outlaw Motorcycle Club is one of the more notorious and oldest clubs on this list. The gang started in Matilda’s Bar on old Route 66 in McCook, IL in 1935. Using the insignia on Marlon Brando’s leather jacket in The Wild One as inspiration, the club adopted the skull with cross pistons as their official club patch. Since the club began over 70 years ago their chapters have spread widely across the United States and have been well established in Australia, Asia, Europe and North and South America.

Harry Joseph Bowman, The World Leader of The American Outlaw Association (A.O.A.), was the international president of The Outlaws Motorcycle Club and presided over 30 chapters in the U.S. and 20 chapters in 4 other countries until he was sent to prison for 3 murders in 1999 after being on the F.B.I’s Top 10 Most Wanted Fugitive list in 1998. Across the globe members of The Outlaws have been suspected, arrested, tried and convicted of countless crimes from prostitution, trafficking in narcotics and stolen goods, arms dealing, extortion and murder. 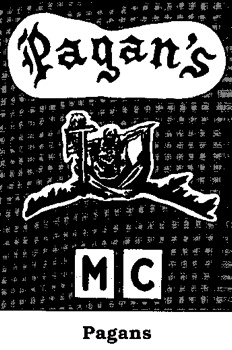 The Pagans formed in Maryland in 1959 and by 1965 had expanded rapidly. Their patch depicts the Norse fire giant Surtr sitting on the sun wielding a sword with the word Pagans in red, white and blue. Members are known to wear their patches on cut-off denim jackets with accompanying white supremacist and Nazi insignia patches. The club’s members have also been seen with tattoos of ARGO (Ar Go Fuck Yourself) and NUNYA (Nun’Ya Fuckin’ Business). Their territory seems to be confined strictly to the eastern coast in the United States.

Aside from their history of violent rivalry with the notorious Hell’s Angels Motorcycle Club, The Pagans have been associated with numerous crimes including murder, arson, drug smuggling and have been linked to organized crime in the upper northeastern United States. In February of 2002, seventy-three members of The Pagans Motorcycle Club were arrested in Long Island, NY after violence erupted at a motorcycle and tattoo ball. The Pagans allegedly went to the ball specifically to confront members of The Hell’s Angels MC resulting in 10 wounded bikers and one murdered Pagan member. Then in 2005, members of The Pagans allegedly shot and killed the Vice-President of the Philadelphia Chapter of The Hell’s Angels. 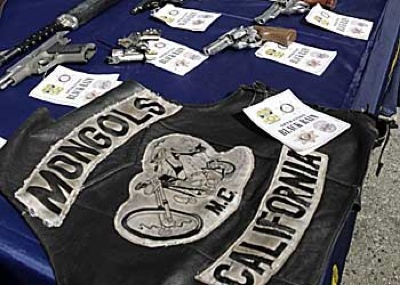 The Mongols, also known as Mongol Nation or Mongol Brotherhood, were formed in 1969 in Montebello, California from Hispanic bikers who were refused entry into The Hell’s Angels MC due to their race. Their colors are black and white and their insignia bears the name Mongols in large black letters above a pony-tail sporting man riding a motorcycle wearing a leather vest and sunglasses while carrying a scimitar or cutlass. Mongol chapters are concentrated in the western United States, but have also opened in Canada, Mexico and Italy.

In 2008, the ATF coordinated a sting against The Mongols MC where 4 agents went undercover to become fully patched members while gaining intelligence about the gang’s activities. This operation resulted in 38 arrests including the arrest of the club’s president, Ruben “Doc” Cavazos. As part of the operation 160 search warrants were served and 110 arrest warrants were carried out. As part of the operation, members of The Mongols MC are now prohibited by law from the use of the Mongol MC logo and insignia including wearing the patches on vests or any other garb. 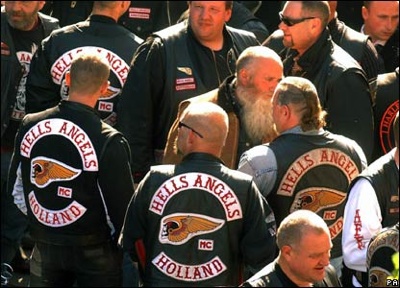 Probably the most well known American biker gang, The Hell’s Angels have a long and thorough history on American highways. Much information concerning their origins is hazy due to their long-standing code of secrecy. Sometime within the 1940’s or 1950’s in California Hell’s Angels MC was formed. Their insignia is the “death’s head” logo which is copied from the insignia of the 85th Fighter Squadron and the 552nd Medium Bomber Squadron. Red lettering over white backgrounds stands for the club’s colors. With so much popularity, Hell’s Angels chapters have sprung up across the Untied States as well as Russia and New Zealand and the continents of North America, South America, Europe and Australia.

The Hell’s Angels MC have gained mass notoriety in the U.S. due to their involvement in many highly publicized run-ins with the law and rival biker gangs. The most note-worthy of publicized events happened during the Altamont Free Concert at Altamont Speedway in December of 1969 where it is alleged that The Rolling Stones hired members of The Hell’s Angels to stand-in as bodyguards for the band. Violence erupted in the crowd and also onto the performance stage and as a result one male was stabbed to death after brandishing a pistol.

Get a first-hand look at life inside America’s most infamous biker gang with Hunter S. Thompson’s incredible novel Hell’s Angels: A Strange and Terrible Saga at Amazon.com!