It wasn’t always this way. If you’re old enough to have been eating Freakies cereal out of the box while you watched Land of the Lost, you know that TV ads of the ’70s were just as trippy as the shows we watched. Heavy on animation, the commercials used bizarre characters to try to sell us their junk.

One of the stock scenarios we always saw was the cartoon villain. Nine times out of ten it was a creature of some sort whose only pleasure in life was stealing the product the company was simultaneously imploring us to buy. As kids we would philosophize: “Why doesn’t he just buy (X cereal/cookies/sugar-blasted drink) for himself?”??This rogue’s gallery represents the best cartoon ad villains of the past, and what they lack in sophisticated animation or live action special effects is more than made up for by their dastardly promotional deeds. Remember these baddies?? 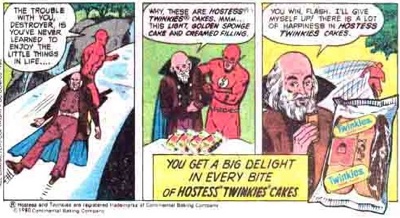 If you read DC or Marvel comics during the late 1970s or early 1980s, or if you’ve read back issues from that era, chances are that you’ve seen the super-hero ads for Hostess cupcakes, Twinkies, etc. These were done as 1-page stories in which a low-rent villain would appear as a menace. Then a super-hero would arrive, and somehow use snack cakes to defeat the villain. Lashing out in his depression, the Destroyer sought to make everyone around him as miserable as he was. Though his powers were not clear, he set about destroying the Doover Dam (no, that’s not a typo). The Flash repaired the damage, then introduced the Destroyer to Twinkies so that he could “learn…to enjoy the little things in life.” On tasting a Twinkie, the Destroyer agreed to give himself up. 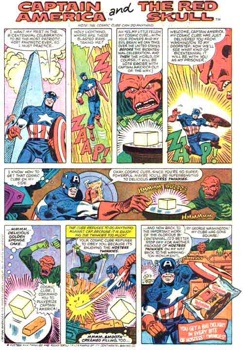 This is the second of the Twinkies villains, but I had to include it because the Red Skull is so awesome! The Red Skull is a name shared by several fictional characters, comic book supervillains from the Marvel Comics universe. All incarnations of the character are enemies of Captain America, other superheroes, and the United States in general. The first two Red Skulls are Nazi agents and the third is a Communist. In this Twinkies advert, Red Skull tries to use the cosmic cube to destroy Captain America – but in the nick of time, Captain America uses a twinkie to prevent this from happening. In the words of Captain America: “Your cosmic cube refuses to obey you because its enjoying the Hostess Twinkies.”

What is McDonald’s jolly purple creature doing on a list of villains you may be wondering. The reason is that Grimace originally went to air as a villain who stole milkshakes! Initially, Grimace was the “Evil Grimace”, with two pairs of arms with which to steal milkshakes. After that first campaign, the character was revised to be one of the “good guys”, and his number of arms was reduced by two. Commercials and merchandise generally portrayed him as a well-meaning simpleton, whose clumsy antics provided a comic foil to Ronald McDonald. Ultimately, I felt it fair to include the evil grimace even though he does still appear from time to time in a new incarnation.

The Noid (voiced by Pons Maar) was an advertising character for Domino’s Pizza in the 1980s. He was a villainous red-suited character with red rabbit ears who attempted to ruin Domino’s pizza but was constantly thwarted. As part of the advertising campaign, a computer game was released in 1989 called Avoid the Noid. Commercials that featured the character used the slogan “Avoid the Noid.” The object of the game is to deliver a pizza within a half-hour time limit, in an apartment building swarming with noids (some of which are armed with heat-seeking or pizza-seeking missiles, or water balloons).

Bizarre fact: In 1989, Kenneth Lamar Noid, a mentally ill customer who thought the ads were a personal attack on him, held two employees of an Atlanta, Georgia Domino’s restaurant hostage for over five hours. After forcing them to make him a pizza and making demands for $100,000, getaway transportation, and a copy of The Widow’s Son, Noid surrendered to the police. Noid was charged with kidnapping, aggravated assault, extortion, and possession of a firearm during a crime. He was found not guilty by reason of insanity. [Source]
?

If you’re too young, you missed the Frito Bandito, who was yanked off the air in 1971 due to a congressional hearing on ethnic stereotypes on TV. Even though more than 80% of Mexican-Americans polled said they liked the character (only 8% didn’t, the others we presume didn’t know him or didn’t care), he was replaced by W.C. Frito. Remember W.C. Frito? Of course you don’t. He was a tepid replacement for the Tex Avery-designed, Mel Blanc-voiced bandit, whose only weakness was Frito kleptomania. ?

McDonaldland was a much freakier place in the ’70s. Apple pie trees, hamburgers (with faces) growing in patches, and shake-spewing volcanoes were part of the geography before a lawsuit from the Kroffts (of H.R. Pufnstuf fame) led to a more conservative kingdom. The Hamburglar used to have villainous company in Captain Crook, whose mission was to steal Filet-o-Fish sandwiches. Now, however, Mayor McCheese has an easier job: Crook was dropped faster than you can say “Robble robble.”??

Clad in a body-hugging green leotard, the  Spotmaker was one of the last great villain holdovers, taking his last bow some time around 1979. “Hee hee hee hee,” he snickered, then pirouetted around the interior of a live-action dishwasher (the Spotmaker himself was a cartoon), flinging spots on dishes. “Do I make you unhappy?” he toyed. “Embarrass you?” The Spotmaker evaporated when faced with Calgonite dishwashing liquid, which is apparently like Kryptonite. ??

Cap’n Crunch has endured longer than a lot of cereal characters, and his old age may be due to the fact that he no longer has to battle enemies. In the ’60s and ’70s, the Cap’n had a pirate arch-nemesis by the name of Jean La Foot. Appropriately barefooted and wearing a scruffy five o’clock shadow, Jean was a cereal-stealer. His Achilles’ heel was the fact that he ate his plunder noisily. “You can’t get away with the crunch,” boasted the hero, “because the crunch always gives you away.”??

Perhaps the most seriously threatening of all the animated ad villains, the Cavity Creeps threatened an entire town: the city of Toothopolis. Granted, it’s a town that exists in your mouth, but one look at the dark, Hulk-like creatures armed with gigantic drills told you they mean business. “We-make-holes-in-teeth; we-make-holes-in-teeth,” chanted the Creeps, and it’s a good thing that Crest has fluorostat (whatever that is), or your teeth would be doomed! The Cavity Creeps lasted into the early ’80s, coasting on the fame of hero-type cartoons.?

Hamburglar (probably the best-known McDonald’s villain) was a thief who was dressed in a black-and-white hooped shirt and pants, a red cape, a wide-brimmed hat, and red gloves whose primary object of theft was hamburgers. The Hamburglar’s early dialog was a continual muttering of “BURGER, BURGER, BURGER.” Later dialog included normal words in a child-like voice. He was originally voiced by Howard Morris, and later by Charlie Adler and Carl W Wolfe, until the character was retired. His catchphrase was “Robble, robble.” In the 2000s, he was temporarily revived for an ad campaign for generic burgers instead of Happy Meal’s.

There were other cartoon ad bad guys, some falling into obscurity like Demon Thirst and Baron von Redberry. While villains continued to occasionally pop up later, the heyday, however, is sadly gone. Perhaps ad executives will again realize that, as much as we questioned the motives of these guys when we were kids, we did something else too. We bought their stuff.