It’s a formula as old as television itself. If the first series did well, why not use the original shows success to make another show using a same character or theme element. Unfortunately, although the formula can occasionally prove successful, (Happy Days, Frasier) more often than not, something is lost in transition. Below are the 10 most uninspired Spin-offs in television history.

Although, “The Brady Bride’s” could have easily been included in this list, by the time, “The Brady’s” rolled around, fifteen years after the original, the show had attempted 2.5 failed spin-offs and the producers should have known better. However, with the success of, “A Very Brady Christmas,” they thought to give it one more go. The show switched genre’s, moving from a sitcom to a dramedy that led to it being mocked as, “Bradysomething,” among insiders. All the original cast members signed on, save for Maureen McCormick. After just six episodes the show was placed on hiatus and then discreetly cancelled.

This is an example of an “engineered” spin off, where the producers of the original show write in a character to be lightly introduced on the original and then they quickly introduce the spin-off with the new character. Most often this is done to create an immediate audience for a new T.V. show from the existing audience of the original. In this case, in a 1977 episode of Happy Days, Nancy Blanksy was introduced as Howard Cunningham’s (Happy Days) visiting cousin from Las Vegas. One week later, the spin off, “Blanksy’s Beauties,” premiered. The show revolved around Nancy Blanksy, managing and overseeing a cast of Vegas showgirls at the Oasis Hotel. The show also featured future Happy Days cast member, Scott Baio as Chachi, Nancy’s nephew and former Happy Days cast member, Pinky Tuscadero as a stuntwoman whom Nancy hires in the 1st episode.

By far the saddest attempt at a spin off is when the producers clearly did not understand what made the original show successful. On, “Three’s Company,” swinging bachelor Jack Tripper lives with two beautiful woman but must constantly pretend to be gay to meet the standards of their landlord Stanley Roper. The hit show got nearly all of its laughs by constantly playing with the misunderstandings and social struggles of such a living situation. Now take away Jack’s bachelorhood, the two beautiful roommates, the expectation to always pretend to be gay and what’s left is, the disaster, “Three’s a Crowd.” Not even the brilliant John Ritter could bail out this dud. Apologies for the appalling video quality – it was the best I could find. 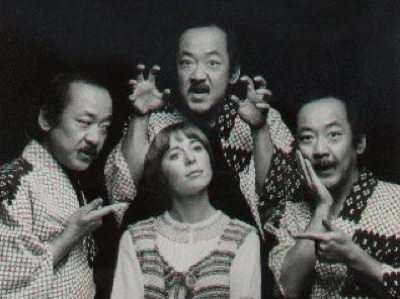 Another engineered spin-off, this show revolved around Mr. T., a brilliant inventor featured in one episode of, “Welcome Back Kotter.” Mr. T was played by Pat Morita and the show was the first to star an actor of Asian descent. Interestingly, Pat Morita also was in the cast of the aforementioned Blanksy’s Beauties in the same year.

By far the most personally disappointing spin-off featured in this list, “The Lone Gunmen,” revolved around three rarely used but highly popular characters from the hit show, “The X Files.” On, “The X Files,” the Lone Gunmen, were a group of conspiracy theory crazed techno-geeks who would occasionally help Mulder and Scully on their missions. In an odd twist of events, in the pilot episode of, “The Lone Gunmen,” the group stops a hijacked airliner from being flow into the World Trade Center. The episode appeared in March, 2001 roughly 6 months before that event would actually occur. Additionally of interest is that on the show, the plot was carried out by an American arms manufacturer with the hopes of increasing his sales to the U.S. by pitting it against a dictator from another country. This is a popular conspiracy theory regarding the actual event.

Proving that one witty catch phrase does not a television series make, the show Flo was a briefly lived spin-off of the hit show Alice. Not even Flo’s trademark, “Kiss my grits,” could help this show last more than 2 seasons. The show revolved around the rough exteriored yet big hearted, Flo and her attempts to start a diner of her own. Legendary Vic Tayback, made one appearance on the show as Mel but other than that no other characters from Alice ever appeared. “Flo,” had several real life successful musicians in the cast including drummer, Mickey Jones and Geoffrey Lewis. There appears to be no video footage from Flo online, so this the beginning of the episode of Alice in which Flo left.

Almost immediately after, “The Golden Girls,” finale aired to 38% of all viewers watching television at the time, the cast minus Bea Arthur reassembled for, “Golden Palace.” The show revolved around Betty White, Rue McClanahan and Estelle Getty taken out of their comfortable community and attempting to actually operate an upscale hotel. Bea Arthur, although she did appear a number of times was not in the regular cast as she had gotten married in the finale of, “The Golden Girls.” A relatively unknown Don Cheadle played the role of the hotel’s manager, although it is questionable whether or not he used that experience as the basis for his Oscar nominated role as a hotel manager in, “Hotel Rwanda.”

This was another perfect example of the producers of a show completely misunderstanding its draw. I am completely positive that a General Lee television show might have had a better chance, not to mention a Daisy Duke spin-off. Anyway, in this horrible hour long spin-off, Enos, reprises his role as a dim-witted officer of the law, only this time it takes place in Los Angeles. Although several of the Duke’s cast appeared, the show failed to find an audience and was cancelled after one season. Although a failure of a spin-off, the show did employ for one episode an unknown Michelle Pfeiffer.

Admittedly, this spin-off was cancelled only after the pilot episode aired on the East Coast (it was pre-empted by the 1984 Democratic Convention on the West.) However, the reason this made the number 2 slot on the list was that its portrayal of Radar’s life after M.A.S.H. completely delegitimized one of the best-loved characters in the history of television, Walter “Radar” O’Reilly. During the pilot, it is explained that Radar had tried farming only to completely fail at it, his wife left him after their honeymoon and he was forced to move in with his mother. There he tries to commit suicide with sleeping pills and aspirin, because as faithful M.A.S.H. viewers know, sleeping pills give him headaches. Suicide? Radar?

Finally, we come to it,-the bar by which all bad spin-offs are measured, Joanie loves Chachi. This flop of a spin-off, found Joanie and Chachi, dating and living in Chicago while trying to make it as a rock band. Even today the show is constantly referenced in popular culture and just the mention of the title alone gets laughs (Scrubs, Friends, Dodgeball). Joanie and Chachi had absolutely no chemistry and along with some very forgettable stock characters, they were canceled after just 2 seasons. Also, the show incorporated a performance by Joanie and Chachi in every episode suggesting that the actors might have had their eye on a touring career, as well.