All Hallow’s Eve. Samhain. Halloween. Call it what you want, but it is fast approaching!

We have all heard our fair share of urban legends, visited some “haunted” houses, been to these locations willingly. But what if we were simply trying to get from point A to point B? We had no intention of exposing ourselves to the paranormal, the supernatural. A lonely night time drive down the wrong (or right?) road is sometimes all it takes to end up with an encounter you were truly not expecting. The houses and castles seem to have been hogging all the ghosts lately, why not give the back roads and byways a chance to scare the pants off of us? Here are 10 roads that, according to legend, will more than deliver the goods.

SEE ALSO: 10 Unique Halloween Traditions From Around The World 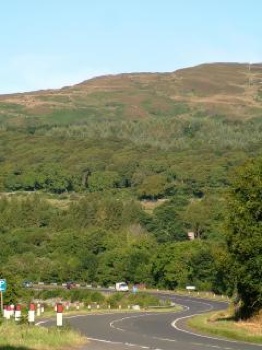 For over fifty years this road has been the scene of numerous hauntings. Reports of paranormal activity have been frequent enough that the road has been nicknamed ‘the Ghost Road’ It is thought to be Scotland’s most haunted road and has received hundreds of reports of unexplained sightings. In 1957 a truck driver saw a couple walk in front of his truck and he thought he hit them. When the driver stopped to investigate the couple were nowhere to be seen. This is something of a typical “ghost story” scenario, but that is what Halloween is all about after all! 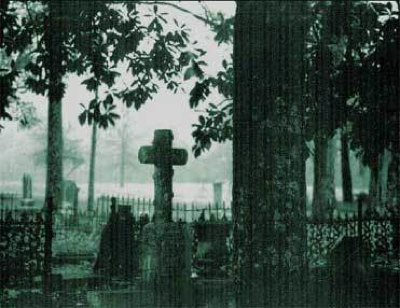 A one-mile section of Kelly Road, Ohioville, Pennsylvania is an area that has had numerous reports of paranormal activity and bizarre happenings. Reports say that when animals have entered this haunted stretch of road they suddenly turn from peaceful and quiet to violent (think Cujo), chasing after other animals and even people. The road is surrounded by dark, thick and creepy forest where white apparitions and noises that can’t be explained have been seen and heard. No one is quite sure why this short section of road is haunted but theories suggest that is could be somehow connected to cult activity that was once taking place in the area and curses that have been put on the land for some reason. 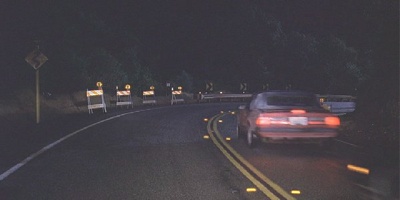 Dead man’s curve is a dangerous turning intersection in Clermont County–according to the most common reports, at the place where 222 meets State Route 125. The road was part of the Ohio Turnpike built in 1831, and it has a long list of victims. On October 19, 1969, five teenagers died there when their 1968 Impala was hit at more than a hundred miles an hour by a 1969 Roadrunner. There was only one survivor: a guy named Rick. Ever since that day, the intersection has been haunted by “the faceless hitchhiker,” whom Rick has seen five times. It is described as the pitch-black silhouette of a man, a “three-dimensional silhouette.”

According to Haunted Ohio III, Rick’s friend Todd said “Rick and I were heading home from Bethel to Amelia. I noticed a man’s shape on the side of the road. It turned like it was hitchhiking, with an arm sticking up. The thing wore light-colored pants, a blue shirt, long hair and a blank, flat surface where the face should have been. We looked back. There was nobody there. I’ve also seen the black shadow figure, walking its slow, labored, dragging walk by the side of the road.”

Due to rerouting, the actual location of Dead Man’s Curve is somewhat in doubt. They say it is at 222 and SR 125, near Bantam Road. As you head east on 125, 222 turns right towards Felicity and Bantam Road turns left toward East Fork Lake State Park. The spot is just below a carryout. 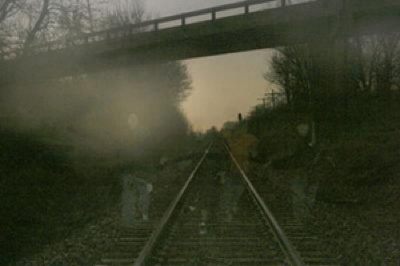 In the city of Belvidere in Boone Country, Illinois there is an intersection that has been the site of many hauntings, particularly the Bloodspoint Road. Other roads included in this local haunting are Wheeler, Flora Church, Pearl, Poole, Sweeney, Cherry Valley, Stone Quarry, Fairdale, and Irene. It is believed that the hauntings on these roads are a result of a number of tragic and spooky events that happened there in the past. These events include hangings, suicide, various train accidents and the purported inhabitation of a witch. 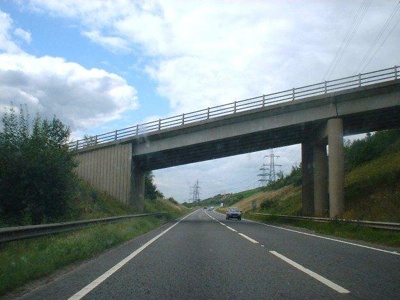 Stocksbridge By-pass is formerly part of the M67 motorway in England, it was then downgraded to a dual carriage way and today it is just a single carriage way. The road, which was finished being built in 1989, runs around north side of the Stocksbridge and its valley. It has been the location of many hauntings. Over time there have been sightings of children playing late at night under the bridge and a monk who just stands and looks out. One sighting of the monk prompted a police investigation which ultimately provided no explanation. Other people have heard the sounds of children singing in the vicinity when there are none to be seen. Perhaps most frighteningly are the reports of people driving who have suddenly noticed an apparition of the monk sitting beside them in the car! 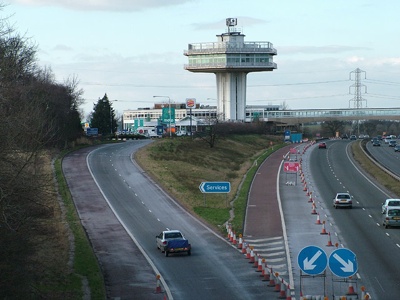 To answer you question, yes, size does matter. Because in England, many people agree that the longest road is also its most haunted! Motorists making their way down this road have experienced unusual phenomena: Roman soldiers marching, an upset woman trying to hitch a ride, and lorry going the wrong way down the road! Apparently with 230 miles and 6 lanes, there is more than enough room for this parade of freaks. Next time you are utilizing the thoroughfare for travel, beware of a phantom pickup truck. 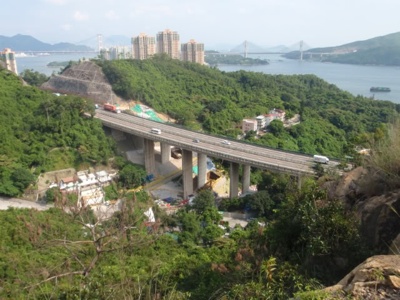 Even if you don’t buy into the whole haunted roads business, you would be wise to exercise caution on this road. The road is very heavily used, yet it hasn’t been redesigned to take all of the modern traffic. It is notorious for it’s frequent traffic jams wrecks. And apparently, the ghosts are out to get you on top of this! Many claim that ghosts will suddenly appear in the middle of the road, causing the driver to swerve to avoid hitting the “person”. And to make matters worse, supposedly the ghosts of the crash victims are being added to the already high spirit count. Travel this road with caution, and keep an eye out for much less cautious “pedestrians”. 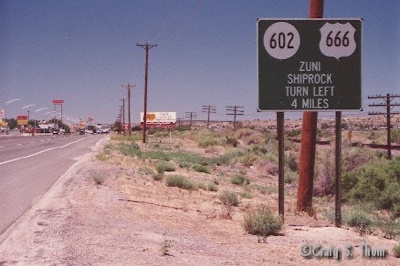 Now known as Highway 191, the route (the sixth branch of the famous Route 66) is notorious for accidents, apparitions, and just plain bad luck. Linda Dunning writes on prairieghosts.com about an incident with her husband:

“He [author’s husband] was alone and hadn’t seen a car for miles and miles. Suddenly, he saw a truck that looked like it was on fire heading straight for him, right down the middle of the highway. The truck was going so fast that sparks were flying up off the wheels and flames were coming from the smokestack. It scared him so bad that he pulled way off the road and walked 20 feet or so out into the desert away from his car and waited for the truck to pass him, going what he estimated was 130 miles an hour. He then got back into his car and continued on.”

If you aren’t careful, hell hounds will shred your tires. A young girl walking down the road will vanish if you try to help her. If you are alone, a ghost may just take up residence in your back seat. Dunning has this to say for you advice:

“Take a lot of people with you and don’t leave any space for unwanted passengers who just might decide to appear in your backseat. Pull off the road if a huge diesel truck comes barring down on you from either direction. Don’t be curious to see if there is a driver in that single car passing you in the night. Don’t look for lights floating in the sky. Hope you don’t see any young girls in white dresses. Never stop if you spot something peculiar and don’t pick up hitchhikers. Lastly, if demon dogs approach you in the night, just keep driving.”

2
A229 from Sussex to Kent
England 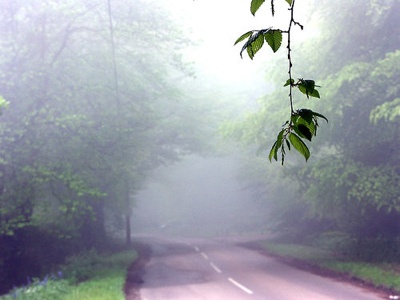 “In November 1992 Ian Sharpe was heading up the A229 from Sussex into Kent. A girl in white with “beautiful eyes” stepped in front of his car and she disappeared under the front Wheels. In total despair Sharpe stopped the car believing he had killed her and was powerless to help.
On leaving the car he found nothing there. No girl, no body no white dress – or even any wildlife; a fox a badger or a rabbit. Not a sausage… I think you get the point.”

If you are faint of heart, this road is not recommended. Another contender for England’s most haunted road is A229. The local constabulary are not strangers to calls of people plowing into pedestrians, more specifically, a woman in white, only to lose track of the body. If you are passing Lower Bell pub towards Maidstone, don’t be too surprised if that hitchhiker vanishes before you reach your destination. The ghost lady is generally regarded as that of Judith Langham, who was tragically killed in a collision of her wedding day, still in her dress. 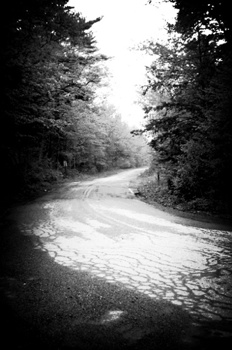 “What is it about this road?” inquires the article on weirdnj.com. A question that has been on the minds of many. What causes all the weird happenings? While nobody can seem to answer the “why,” most can attest to the “what”.

If you are visiting the road at midnight, stop by the bridge at Dead Man’s Curve for a game of catch. Toss pennies into the water, and the ghost of a young boy will toss them back.
A gray wolf with red eyes will stalk you from the bushes.
Satan worshippers will hang hang up their bloody clothes to dry, right next to the mutilated animals.
The ruins of a castle reside in the woods.
If you find yourself in the wrong section of woods, expect to be chased out by Satanists or the Ku Klux Klan.
Weird animals, speculated to be survivors and interbred specimens from the abandoned nearby zoo, Jungle Habitat, from which most of the animals escaped.
A dangerous curve that has been the demise of many an unwary driver is rumored to be heavily haunted.
Phantom pickup trucks will gladly escort you from the road. Well, chase you.
Weird lights flying in the sky will draw you attention upward, away from the blood stains on the pavement.

This road is not a joke. Regardless of your stance on the paranormal, it is confirmed fact that many dangerous groups gather here for less-than-savory activities. And they do not like to be disturbed.