Being inspired by a radio show discussing the art and architecture of Italy, I stumbled upon the Capuchin Catacombs during a Google Internet vacation. Initially, I took a virtual tour of the catacombs out of morbid curiosity. It did not take long before that curiosity turned into fascination and imagination. The mummies interred there made a real connection between history and the present. Men, women, and children who have lived and died from mere decades ago to centuries ago, still live on as preserved snapshots of their lives and eras.

If you have further interest of catacombs, I placed a link to the first site I found years ago. It’s an excellent spring board to dive into fascinating Europe. Catacombs, secret passages, marvelous art, lore, legends, and the underground await! 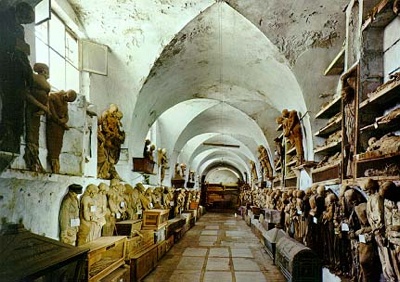 The Capuchin Catacombs are located in the city of Palermo, which is the capital of Sicily. Interred in the Capuchin Catacombs are approximately 8000 corpses dating from the 1500’s to 1920. In the early 16th century, the church originally meant to preserve and make accessible the bodies of monks and friars in order to ask for their intercessions – face to face. The trend caught on, and soon the general populous also wanted to be preserved and buried in the catacombs so families can visit them.

Brother Silvestro is the oldest monk to be buried in the Capuchin Catacombs. It’s fascinating to observe his clothing. The simple headpiece, the humble brown robe. You can easily imagine him walking the monastery grounds, praying at the altar, drawing water, and eking out a living with his fellow brothers. 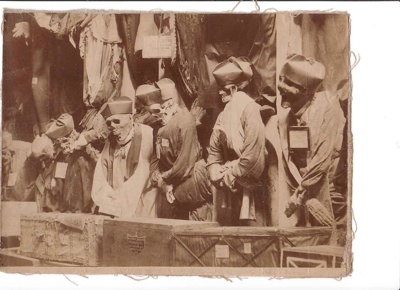 Priests, Bishops, and Cardinals have traditionally dressed themselves to the hilt! Alas, look at them now. Once powerful men, now powerful men of the catacombs. Dressed in opposite fashion of the humble monks and nuns, imagine the colors, the excitement, and the pomp and circumstance at the time when these church leaders ran about the city and cathedrals amidst the horse clops and aromas of incense and pasta sauce. Still today, especially in Rome, a person can observe ornate high ranking church officials in their colorful garb bustle about in the modern world as you can see in this photograph. 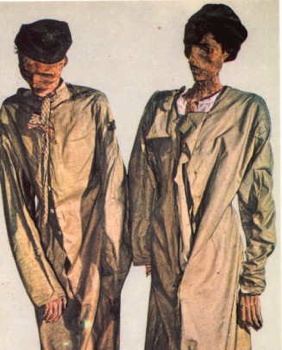 As monks, nuns, and priests filled the catacombs, the common folk wanted in on the action. This photo is fascinating because these two corpses are brothers, painters, and just ordinary men. As I study their coats and headwear, I wonder what they painted. Frescoes? Eateries? Homes and fences and other popular demands? Did they do restoration work on prominent art? Regardless, a lot of beauty flowed through those hands. Who knows? Their handy work is probably still visible today! 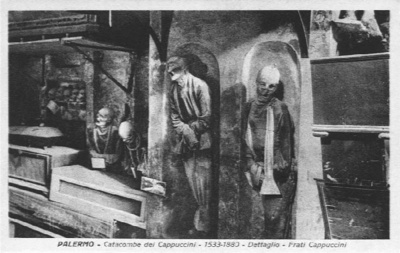 These corpses are not really screaming. This is the natural result of decaying muscle and ligaments with the help of gravity. Very shocking and eerie at first, but really very natural and scientific. 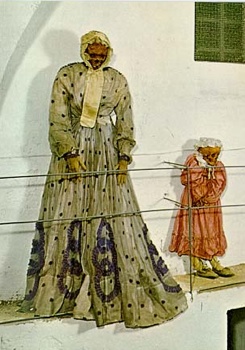 Dusty, centuries old mummies may or may not muster much emotional feeling. But the woman and child shown here not only invoke feelings, but elicit curiosity to the histories they have to tell us. It was fashionable for a time to pose bodies as they were in life. Here the woman, maybe a mother with her daughter, are dressed very sharply for all to remember. Wonderfully preserved for generations in their beautiful dresses. Quite possibly victims of an illness or epidemic that struck it’s victims indiscriminately. A brutal reminder that there are forces beyond our control. 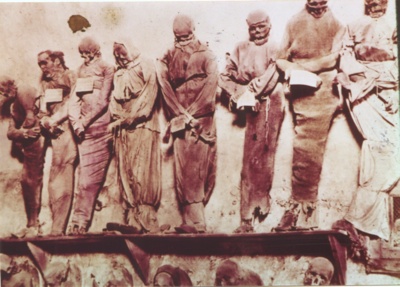 Capuchin Catacomb has divisions for men, women, children, professionals, and more. Here is a group of teachers. They may have taught children reading, writing, arithmetic, or maybe they taught higher levels of education. Maybe they were liberal with rulers and switch sticks! But one thing is clear – though here they lay, even today we reap the rewards from their work done generations ago. They educated the masses in their time. Their pupils built on, worked from, and refined that education throughout the ages. Teachers of all ages are one of the most important and fundamental needs of civilization. Their bodies are temporal. Their work eternal. 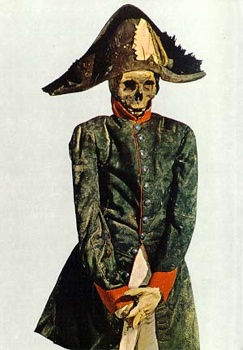 The Colonel, in a French Bourbon uniform, is an outstanding relic from the past. His uniform floods the imagination of what an officer’s life might have been like in the 1800’s. What code of conduct did he adhere to? Was he a formally educated noble or did he earn his rank through hard work and battle? I can easily imagine this proud man standing at attention, or demanding attention from subordinates. His hat atop his head, cradled in his arms, or sitting proudly in front of him at his desk. 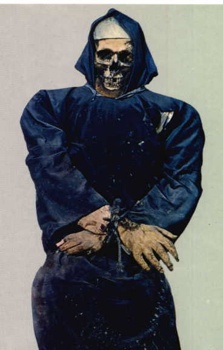 Bartolomeo Megna’s hands are tied, not because he was a prisoner, but to keep them folded in front of him. Similarly, if you further pursue other mummies in the catacombs, you will notice many methods of fastening. Limbs have been known to fall off from time to time. Bartolomeo Megna was a big fellow. He may have had a few friends of smaller stature who looked up to him as friend and protector. Who knows? 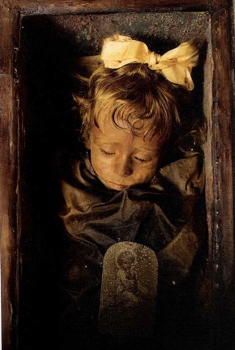 This photo gets me down every time I see it. Rosalia was only two years old when she passed away to what is believed to be Pneumonia. But she has a special place in the hearts of visitors and caretakers. She was the last to be interred at the Capuchin Catacombs in 1920. 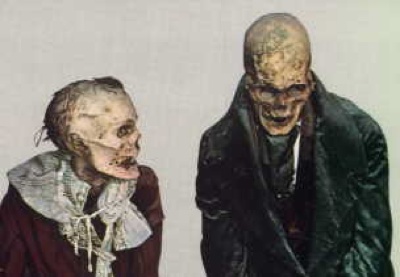 Shoo now! Explore on your own! If you want a good place to start, you can visit King’s Capuchin’s Catacombs of Palermo Italy. I am not affiliated with her site, but it was the first site to get me interested in catacombs and European history! And she let me borrow some pictures for you kids. Thanks Kimberly!