Cats have been associated with humans for at least 9,500 years, and are currently the most popular pet in the world. Cat owners know both how sweet and how mean they can be, but the cat world is more than squealing over kittens. Genetics and selective breeding have created some distinctive and unique cats, and here are what the list author believes to be the 10 strangest cat breeds. 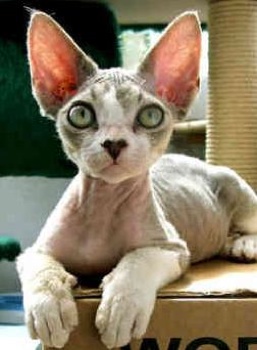 The Devon Rex breed of cat has only been around since the 1960’s. They have been genetically proven not to be related to the Cornish or German Rex breeds. The strange thing about the Devon Rex is the fact that they have very little “guard hair”, the stiff, coarse, waterproof hairs present on most furred mammals. They have mostly “down hair”, or soft, fine undercoat fur. The Devon Rex is especially unique in that their down hair is curly. They also have rather large eyes, and large, low-set ears. Devon Rex cats are active, playful, and friendly, and enjoy being perched on peoples’ shoulders, like parrots. They are also very intelligent, and can be taught tricks, such as fetching and walking on a leash. The Scottish Fold (or Coupari in Canada), has a dominant genetic mutation that causes the cartilage in their ears to have a fold, sometimes even up to two or three folds! This makes their ears flop forward, giving them their distinctive appearance. The more folds the cat’s ears have, the closer to the head the ears will lie. The Fold’s ears look straight and normal at birth, but will begin to fold after about 21 days. Scottish Folds are generally friendly, cuddly cats, and don’t mind other pets. They also like to sleep in the “Buddha position”: sitting with their legs straight out and their back straight up from the hip, like a human. 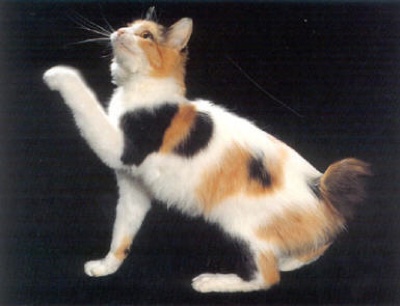 Japanese bobtails are born with a rabbit-like puff tail, and some will even hop like rabbits, rather than running! In the year 1602, the Japanese government demanded that all cats be set free, to help protect the valuable silkworm fields from rodents. Buying and selling cats was illegal at the time, so Japanese bobtails were street cats. Bobtails come in many colors, but the most popular is the calico, or “mike” in Japanese. Most people have seen at least a version of the bobtail. The famous “Maneki Neko” or “beckoning cat” is a good-luck charm, consisting of a Japanese bobtail sitting on its haunches with one forepaw raised. Tying into the next breed on the list, odd-eyed bobtails are now quite popular in Japan. Having “silver and gold” eyes (actually blue and amber-yellow), the heterochromatic kittens are much more expensive, but don’t have the same legends surrounding them as the Khao Manee. 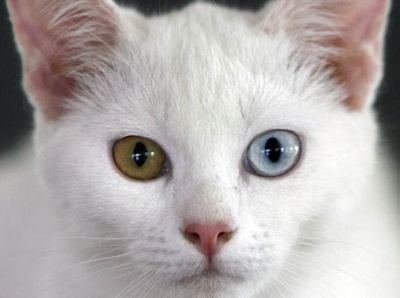 I actually own a Khao Manee, which is what prompted me to write this list. Siamese cats, with blue eyes and point coloration, are what everyone in the States considers a Siamese. In Thailand and the surrounding areas, however, the khao manee is the one and only Siamese cat. The Khao Manee (or “White Jewel”) was the royal cat breed of Old Siam. It is said that the penalty for a commoner stealing a Khao Manee was death. Khao Manee are pure snow white, with the “silver and gold” eyes stated in #8, though the “gold” eye is most often actually an amber-green color, rather than straight amber-gold.

This breed is unique in that many Indonesian cultures find the Khao Manee to be extremely lucky. No true Khao Manee were found outside of Thailand until 1999, when breeder Colleen Freymuth received two Khao Manee, and became the first person outside of Thailand to breed them. The earliest mention of the Khao Manee was in the Tamra Maew, or “Cat Book of Poems” in 1350. This means that, until 1999, Khao Manee had been bred only in Thailand for nearly 650 years! Because of the luck associated with them, Khao Manee are very expensive. In the UK alone, kittens go for eight to ten thousand dollars.

Savannahs are incredibly interesting cats. They are the result of breeding a standard domestic cat with the serval, an African wild cat. The first Savannah had a Siamese mother, but Savannahs simply need to have a serval ancestor to be considered for the breed. Savannahs have wild-looking spots, stripes, and markings, but the patterns will differ, depending on the domestic cat breed used. Generations are marked by “filial numbers”, showing how far removed from the serval ancestor they are. An “F1” Savannah had a domestic cat parent and a serval parent. An “F2” Savannah had a serval grandparent, and so on. Savannahs who had a serval father and a domestic cat mother are 50% serval. Those cats can be bred back to servals to the point where resulting kittens are 75% serval… sometimes even up to 87.5%! Savannahs are generally incredibly large cats. F1 cats can get up to 30lbs. in weight, but later litters of smaller filial numbers will be smaller.

They are often compared to dogs in their loyalty, and will follow owners around the house, play fetch, and can be trained to walk on a leash. Savannahs greet people by head-butting them, though some may pounce. Savannahs tend to love water as well, and will even jump into the shower and join their owners. Water bowls around a Savannah will prove messy, as they like to bat the water out of the bowl until empty. They are also known for their jumping ability. From a sitting position, Savannahs can jump 8 feet straight into the air. Savannahs are also interesting vocalists, and will chirp, meow, and hiss. Their hiss is a throwback to their serval ancestor, and sounds more like an angry snake than a cat.

[JFrater: I have added a youtube clip because you really do have to see this cat jump! If you can’t view youtube (at work for example), here is a photo instead. Here is another video of a cat jumping 7 feet!] 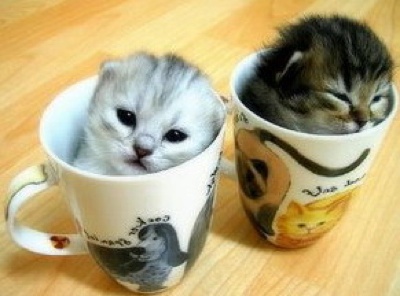 Teacup Persians are a breed that has become quite popular recently. Many people have moved into smaller houses and apartments, and because of the space restrictions, the demand for teacup Persians has exploded. Teacups are not a strange genetic mutation, but rather the result of selective breeding of smaller-sized Persians. These cats are unique, as they look exactly like normal Persian cats, with long fur and their distinctive flat faces, but will never grow more than 6lbs. for females and 7lbs. for males. Full grown, they are about 8 inches tall while sitting. Standard Persians range from 10lbs. to 13lbs. in weight. Despite their small size, Teacup Persians are still Persians, and are susceptible to the myriad health problems that normal-sized Persians are, such as urinary tract disorders, lupus, eyelid cysts, and various cancers. 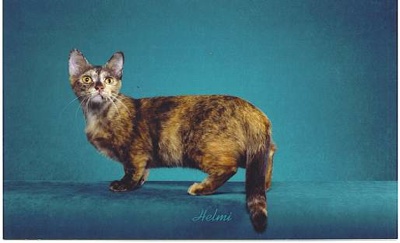 Munchkin cats don’t have a specific coloration. Rather, they have a genetic mutation that causes their legs to grow incredibly short, or “achondroplasia”. The condition does not affect their running or jumping abilities. The main problem with Munchkin cats lies in the genetics. Kittens who end up with two copies of the Munchkin gene will not survive. Because of this, the Munchkin breed is not recognized by cat fancying societies, as the trait is a “genetic disease”. Because of the genetics, Munchkins are predisposed to have sunken chests and spinal deformities. Munchkins are considered a breed, but can have the characteristics of another breed of cat, such as a Devon Rex or a Burmese. They essentially will look like the main breed, but with the characteristic short legs and larger heads. 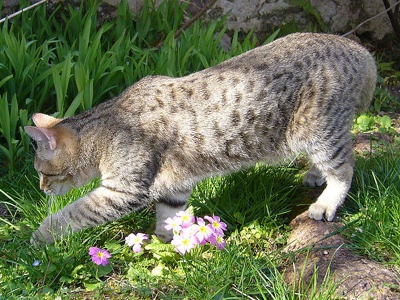 Pixie-Bobs are a breed of cat that are relatively large. They are fully domestic, but appear to look exactly like a small bobcat. The Pixie-Bob was bred from exotic-looking stray and wild cats, rather than actual bobcat hybrids, as the original breeder previously claimed. There is no distinct personality for the breed, but what is interesting is that the cats meow rarely, or never meow at all. Instead, they communicate by chirping. They will also follow their owners around the house. Pixie-Bobs are incredibly intelligent, and enjoy being walked on leashes and playing fetch. They are even capable of understanding some human words and commands. 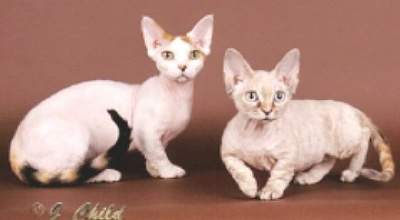 Minskins are one of a set of breeds known as “dwarf breeds”. They are created by breeding a Munchkin (#4) with other cat breeds. Minskins are the result of a Devon Rex Munchkin being bred with a Sphynx cat. They appear simply to be incredibly small Sphynx cats, and require the same grooming. The Minskin is an incredibly new breed, and has only been around since 1998. The first standard Minskin was born in 2000, and by 2005, there were fifty of them in existence. Minskins are not to be confused with the “Bambino”, which is a Sphynx cat bred with any Munchkin breed. Minskins need to have a Munchkin parent with the fur of a Devon Rex. 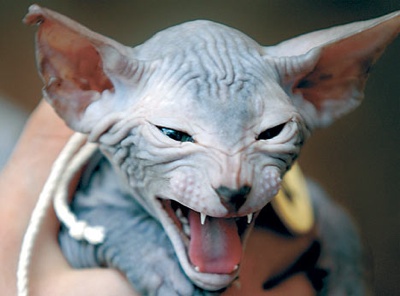 The Sphynx, or Canadian Hairless, is a breed of cat that is born without fur. Dating back to 1966, the cat was incredibly rare due to the delay in breeding it. The first cat, Prune, died without throwing a litter. In 1967, a mother Sphynx and her kittens were saved. After a second litter, two kittens were transported to London, and from there, the Sphynx breed was truly born. Sphynx, contrary to popular belief, aren’t actually hairless. They are covered in an incredibly short, soft fur that has the feel of peach fuzz. It is also possible for Sphynx cats to grow whiskers and eyebrows.

Sphynx cats need regular bathing, about one bath a week, as the natural oils from their skin can’t be absorbed by their fur, and can build up on the skin and become quite fragrant. Despite not having fur, the breed is NOT hypoallergenic. They still produce the protein in their skin oil and saliva that triggers allergic reactions in those susceptible.