I wrote this list as a companion to the “Top 10 Misconceptions about the Middle Ages” list. A few words on the criteria I used to put this list together. First of all, the boundaries of the Middle Ages are a matter of some debate. I define the period as being between the late 7th and the late 14th centuries, so I imagine there will be some comments protesting that. For what it’s worth, Classical Antiquity was slow to die, and the Renaissance was slow to develop, so naturally, there are some grey areas there. I also anticipate comments asking why I said nothing about Gothic architecture, or troubadours, etc. The reason for the omission is two-fold. One, for as long as civilization existed, there was always art, so having its own distinctive art forms does not, in and of itself, make the Middle Ages unique. Two, I did not want to include the REALLY obvious. Rather, in making the list, I was guided in part by Umberto Eco’s observation about his famous novel, “The Name of the Rose“, to the effect that readers identified certain ideas in the book as modern, while the were in fact medieval, and other ideas as medieval, while they were in fact modern. And so I asked myself: What things originating in the Middle Ages do we still see around us, every day, often taking them for granted and not realizing that they are medieval? Hence the list below. 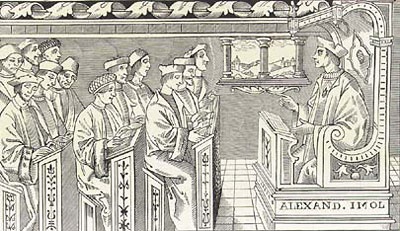 Schools have existed since deep antiquity, but it was not until the Middle Ages that the University — an autonomous, self-governing community of students and scholars — emerged. Excellent schools of higher learning which served as precursors to universities (and later became true universities) emerged in the Byzantine Empire and the Islamic world in the second half of the 9th century. The first two institutions to actually call themselves by the Latin term “universitas” were the University of Bologna and the University of Paris, founded within a short time of each other in the late 11th century. What set a university apart from institutions of higher learning that existed previously, was that a university existed not solely for the purpose of teaching, but also to facilitate research and debate; and that its curriculum covered both religious and secular subjects. Medieval European universities typically offered degrees in four disciplines: theology, law, medicine, and “letters” (i.e., liberal arts). 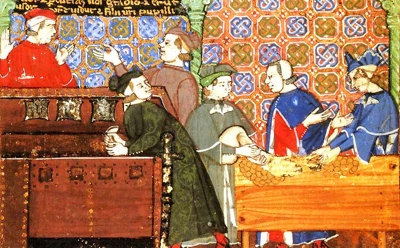 Although precursors to banking existed probably since before the invention of coinage, it was medieval (and mostly Italian) entrepreneurs who developed complex banking in the form that we would recognize today, as a system that can be readily distinguished from simple money-lending. Medieval bankers invented such things as bills of exchange (which eliminated the necessity of carrying actual coins over long distances), deposit banking (very similar to modern savings accounts) and bonds. What we know today as government bonds was probably invented in Florence in the 14th century with the establishment of 2 public funds — the general Monte fund and the dowry fund — whose purpose was to finance public debt after the economic cataclysms in the wake of One Hundred Years’ War. In sum, the medieval banking system introduced many of the elements that became the organizational backbone of modern finance. 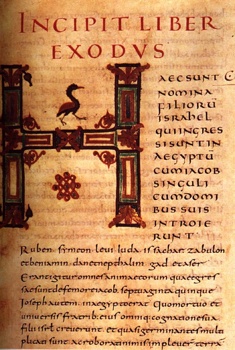 Ancient and early medieval scripts, whether based on the Roman or Greek alphabet, were written in all-capital letters and in one continuous, unbroken stream of characters. The Carolingian Miniscule, developed sometime in the 9th century, was an innovative script that introduced lower-case letters and spaces between words, as well as uniform, rounded characters that were more legible. Although punctuation did not begin to be utilized extensively until the development of printing in the 15th century, the Carolingian Miniscule represented a giant leap towards making writing more “user-friendly”. Most types of scripts and fonts we have today, that utilize the Roman alphabet, are derived from the Carolingian Miniscule. 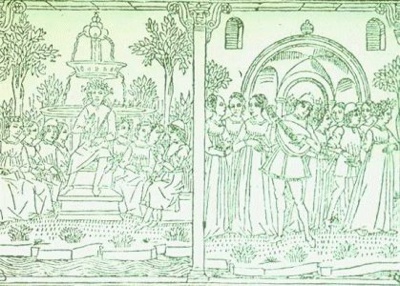 There are some examples of book illustration from the Roman times, but they are rare. It was in the Middle Ages that it became standard practice to supplement text with detailed illustrations. Unlike earlier, ancient illustrations, which (besides being very rare) were in the nature of diagrams and representations of artwork or architectural detail that is difficult to express verbally, medieval illustrations introduced pictorial representations of scenes that were perfectly clear from the text: e.g., a man walking, two people having a conversation, peasants harvesting grain, etc. Long before the invention of the printing press, artists decorated manuscripts with vivid, elaborate, and occasionally allegorical artwork that is often of astounding quality and detail, and can be just as, if not more, intriguing than the text itself. An historian will probably argue that illuminated manuscripts developed due to the problem of near-universal illiteracy in the early Middle Ages, to help people, whose reading skills were poor, to decipher the text and to enjoy it. Whatever the reasons, these manuscripts are the forerunners of today’s illustrated newspapers and magazines, textbooks, and even this website, which so heavily supplements text with images. 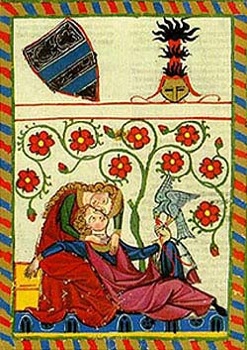 Although they surely have evolved with time and social change, most of our romantic notions are ultimately derived from the medieval tradition of Courtly Love, which combined erotic desire with Platonic attachment and spiritual admiration. This is not to say that today’s garden-variety romance is in the nature of medieval Courtly Love — after all, the latter was secret, practiced between members of the nobility, usually adulterous in nature and rarely consummated physically. But the core ideas of Courtly Love — those of love being exclusive and unique, something greater than sexual desire, and characterized by companionship and devotion — are certainly with us today, and quite different from the ancient notion of love, which was substantially limited to physical desire. 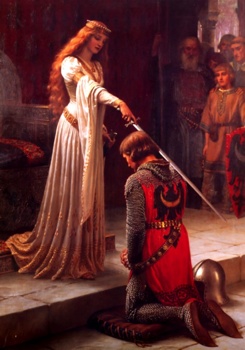 Again, as with romantic love, our notions of what it means to be chivalrous have evolved with time and social change. And as with romantic love, the core medieval ideas about chivalry shape our attitudes today in significant ways. Originating with the Moors of Al-Andalus (Islamic Spain), the chivalric code of the Middle Ages dictated that a knight must not only be skillful on horseback and valiant in battle, but also just, courteous, well-mannered, compassionate and culturally sophisticated. This was a major departure from the ideal of the brute warrior of antiquity. It is the tradition of chivalry that shaped our notion of the Renaissance Man — although it would probably be more historically accurate to call that ideal the Medieval Man. 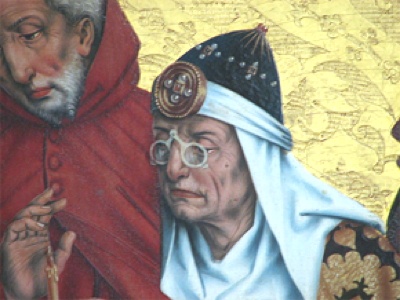 Abbas Ibn Firnas, an Andalucian polymath, invented the magnifying glass in the 9th century. Salvino D’Armate, a Florentine, invented wearable eyeglasses towards the end of the 13th century. The earliest spectacles differed from modern eyeglasses in that they did not have temple arms hooking behind the ears, and the lenses were only for hyperopia (farsightedness). Lenses for myopia (nearsightedness) were invented in the 15th century. 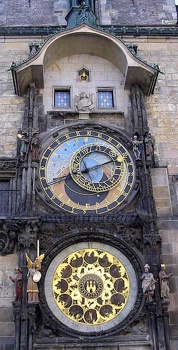 Various church records indicate that mechanical clocks using oscillation and falling weights were invented in the late 13th century. The earliest tower clocks usually had no faces or hands and announced canonical hours instead of astronomical hours. More sophisticated clocks had moving dials and showed time according to two or more different systems. 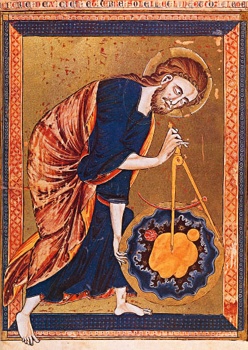 Although there is some disagreement among historians about this, the compass was probably independently invented in China and in Europe in the 12th century. The dry compass, or “mariner’s compass” was developed and perfected in Europe, probably Italy, in the late 13th – early 14th centuries. Before the invention of the compass, ships sailed close to land and mariners navigated by observing natural landmarks and the position of celestial bodies. This made sea travel long and inefficient, dangerous (when a ship had to sail within sight of enemy territory or a pirate base), and seasonal (since the sky was frequently overcast in the fall and winter). The compass enabled ships to sail into the open sea and to determine their direction even when celestial bodies could not be observed. This navigation device has had a lasting impact on civilization and was used for over 800 years before finally being supplanted by GPS. 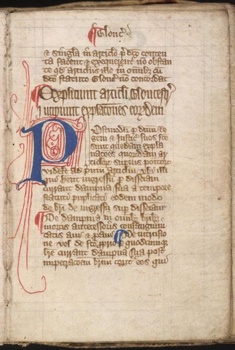 The significance of the Magna Carta has sometimes been a bit overstated. What cannot be denied, however, is that it codified two revolutionary principles: (1) the king must govern with consent; and (2) the king must govern within the law. These twin principles laid the foundation of modern Western liberal democracy, which combines elements of monarchy, oligarchy, and ancient-style participatory democracy in a mechanism utilizing the advantages of each to the maximum. 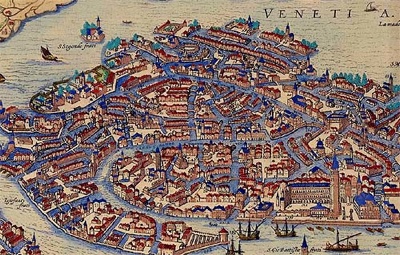 Ancient cities, even great ancient cities, such as Rome, were important primarily as fortified seats of power. It was in the Middle Ages, however, that the notion of a city evolved into something more than fortified physical space — into an idea and a vision; large, socially complex societies based primarily on economic relationships rather than kinship. It was in the Middle Ages that big cities became identified as places of freedom, opportunity, anonymity, renewal and self-invention — the aura that cities still possess today.