The concept of Christmas comes from the stories of a virgin birth. Below are ten stories that are no less bizarre – from the weird science to just plain weird. The stories may be wide and varied but there are some parameters that were set prior to making this list. You won’t find any stories of children born with congenital physical anomalies (although if you want to share some, please do so in the comments!). Any record-holding moms or babies had to have survived through the child’s infancy. These stories came as I found them and the only real “ordering” was done to put similar stories next to one another. 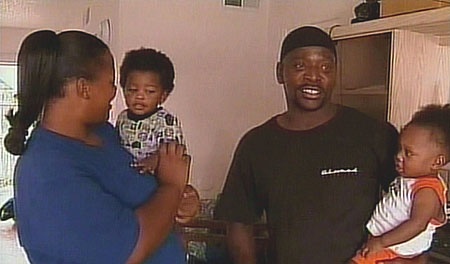 Mia Washington had twin boys but her husband is the biological father of only one. Washington had an usual case of birthing fraternal twins with two separate fathers. This story has become more common because of occasional in-vitro treatment tales of lab error in which a few eggs were contaminated with the wrong sperm, however, Washington’s story unfolds much more naturally. She first became pregnant when having a little fun with either her husband or lover. Very soon afterwards, she met up with the other man and a second egg was released and fertilized. This is a medical rarity known as heteropaternal superfecundation and only a handful of cases have ever been documented. When the two babies were born and one looked nothing like the father, the truth was discovered. Mr. Washington adopted Mia’s other son and took the fatherly role for both children. 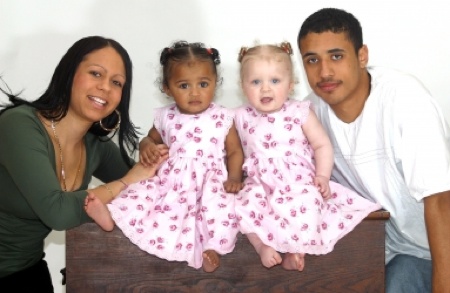 The chances of a mixed-race couple having twins who look as if they are different races are a million to one but there are occasional stories that pop up about them, like Kian & Remee Hodgson (above) and Ryan & Leo Gerth. A British couple has become even more of an exception by having TWO sets of twins who look remarkably different. Miya and Leah Durrant were born in December 2008 and their older sisters Hayleigh and Lauren were born seven years earlier. Miya has the black hair and dark complexion of her father Dean Durrant and older sister Hayleigh while Leah has blue eyes and paler skin just like mom Alison Spooner and older sister Lauren. 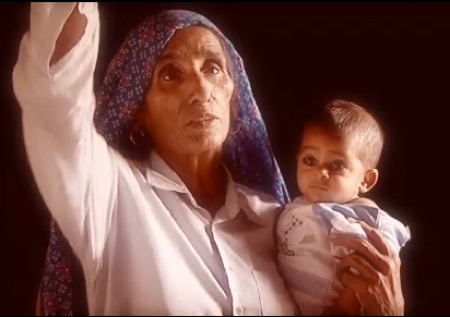 In 2008 and at the age of 70, Rajo Devi became the oldest woman to give birth. She and her husband had unsuccessfully tried to conceive all throughout their 50 years of marriage and thought it was impossible after she went through menopause in her late 50s. However, after entering a fertility program at an in-vitro clinic, Devi was successfully impregnated by a donor egg that was fertilized with the sperm of her 72 year old husband. On December 6th, she gave birth to a baby girl and both mother and daughter are healthy. Latest reports claim that the happy septuagenarians are attempting IVF again in hopes of having a baby boy. 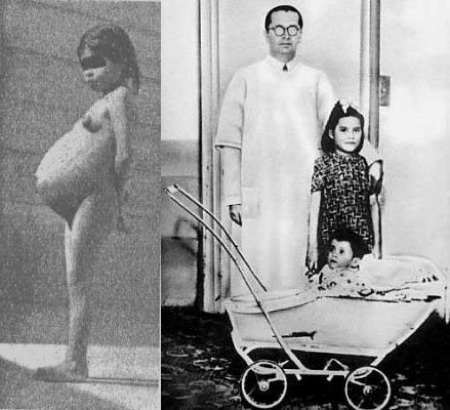 Lina Medina of Peru holds the record as the world’s youngest mother when she gave birth to her son on May 14, 1939. Lina was only five years old at the time. Her son, Gerardo, spent his childhood believing his grandmother was his mother and his true mother was his older sister. He died at the age of 40 from bone marrow disease but there was no indication that his unusual birth had anything to do with his problem. Although studies about the pair are hard to find, what is known is that both mother and son were both healthy and suffered no visible affects of such a bizarre birth. Lina married in 1972 and gave birth to her second child that same year – 33 years after Gerardo had been born. To this day, Gerardo’s biological father is unknown and Lina refuses to disclose that information. 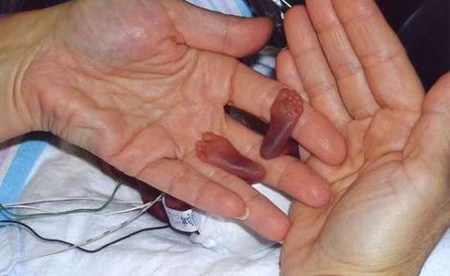 James Elgin Gil was born May 20, 1987 in Ottawa, Canada and is the world’s youngest surviving premature baby. He was born 21 weeks and 5 days into gestation (more than 18 weeks too early). To understand the gravity of the situation, one should know that the survival rates for premature babies born at 22 weeks is less than 10%. Many hospitals will refuse to give medical attention to babies born before the 22 week mark. This baby lucked out by weighing a “hefty” 1.1lbs (482 g) at birth, which increased his chances of survival. The title for tiniest single baby goes to Amillia Sonja Taylor of Florida, USA (above). She was born at 21 weeks and 6 days but weighed only 10 ounces (283 g). Remarkably, the hospitals where both of them were born decided to bring the babies to intensive care and they are now both healthy and doing fine. 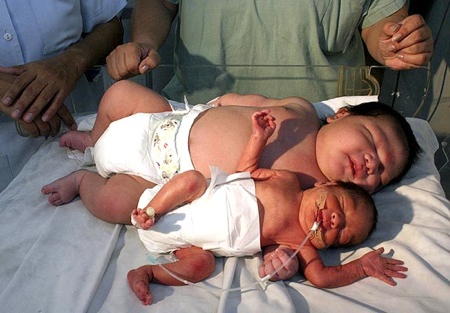 The record for birthing the world’s heaviest (surviving) newborn belongs to Sig. Carmelina Fedele of Aversa, Italy. In September 1955, she gave birth to a baby boy who weighed 22 lb 8 oz (10.2 kg) but not much else is known about the boy. Second place belongs to a boy born in September 2009 weighing 19 lb 3 oz (8.7 kg). The name of the child wasn’t released but what is known is that he was born to an Indonesian woman with a history of diabetes. Due to insulin problems, diabetic women tend to have larger than average babies. Her three previous children were also heavier-than-average kids but this little boy was significantly larger! 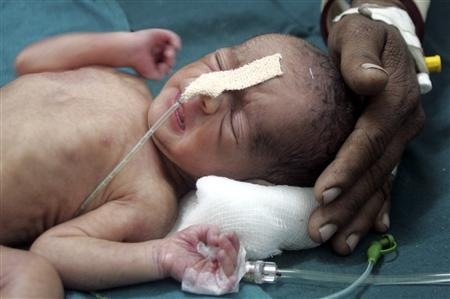 There’s an alarming amount of stories to be found of babies born near or even in the toilet but Bhuri Kalbi’s daughter has the distinction of being born while mom was on a toilet of an Indian train. Kalbi was only seven months pregnant when she rode this particular train so she hadn’t anticipated the outcome of her trip to the bathroom. She felt like she needed to use the toilet but what actually happened was a Precipitous Birth, or a quick birth commonly associated with pregnancy complications. Toilets on Indian trains are chutes that empty directly onto the tracks so after the precipitous birth, Kalbi’s baby fell through the hole and onto the tracks as the train was in motion. After receiving the alert, staff at a nearby station found the baby girl still alive on the tracks. 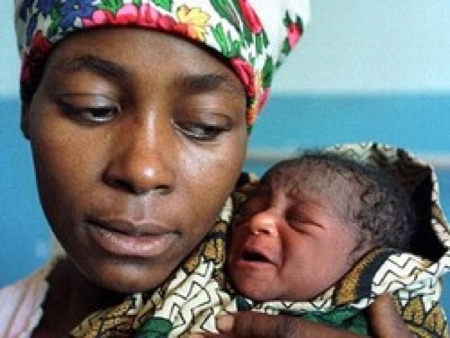 Carolina Chirindza gave birth to her baby Rositha in a tree. In 2000, Chirindza’s home in Mozambique was overcome by rapidly-moving high floodwaters so she climbed up a tree to avoid the crocodile-infested waters. For four days without food or water, she waited for rescue. Baby Rositha was born on the fourth day and fortunately, a South African military helicopter rescued them shortly thereafter. There is also a tree birth story from Papua New Guinea. The pregnant Nolan Yekum and her husband were hung from a tree after being accused of witchcraft. She gave birth mere moments before she and her husband freed themselves from their nooses and went into hiding. Eventually both tree babies and moms were admitted into the hospital and given a good bill of health. 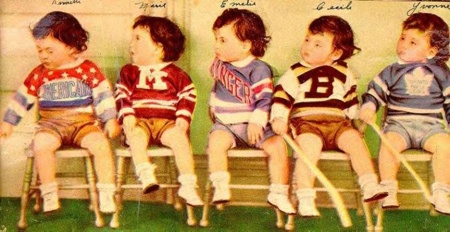 Their names are Annette, Cecile, Emilie, Marie and Yvonne but they are better known as the Dionne Quints. They are the only recorded set of identical quintuplets and one of the very few sets of naturally-conceived high multiples to survive infancy. In May 28, 1934, the Dionne Quints were born to the impoverished Elzire and Oliva Dionne of Canada. When the quints were nine months old, they were taken from their parents and became wards of the state to live in an estate that became known as Quintland. There, they lived a rigid schedule consisting of either medical testing or structured playtime outdoors in the observatory field where tourists could watch them without interacting with the children. In fact, they had very little contact with people aside from the nurses and house staff. When they were nine years old, their parents won back custody of the children but they continued the girls’ “fish-bowl” existence with various engagements, photo-ops, tourist attractions, etc. to turn a profit from the publicity. The sisters claimed they never saw any of the purported millions of dollars made by the government and their parents from this bizarre upbringing. With their privacy severely abused and their childhood traumatized, the Dionne Quints severed ties with the rest of their family and the three surviving sisters currently share a modest house and an intensely private life in Montreal. 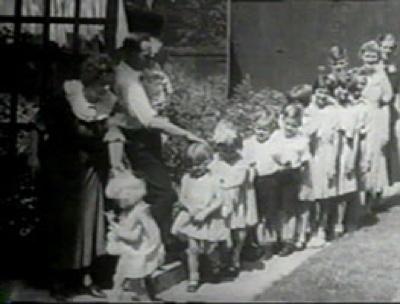 Charles Vance Miller had an ordinary birth and never had children of his own but he certainly deserves a spot in a list of bizarre birth stories. By the time of his death in 1926, the Canadian lawyer amassed a large fortune but had no one to leave it to. He was a strange fellow whose puckish attitude was reflected in his will. Among his many oddball bequests was that his Jamaican vacation home be given to three lawyers who absolutely hated each other. When the last lawyer died, the house would be sold and the money given to Toronto’s poor. The will also stated that any unstipulated money was to be given to the mother who gives birth to the highest number of legitimate children within the ten years after his death. The event became known as the Great Stork Derby and by the end of the ten year period, six moms split the fortune: $125,000 each to four women who gave birth to nine children apiece and $12,500 to two women, one of whom had two stillbirths and the other who had children with someone who was not her husband. The prizes may not seem like much now but each was a fortune given the Depression of the early 30s. Happily, all of the families used their money wisely with the children’s education being the top priority.

10 Weird Ways to Live On After Death