[WARNING: some images may be considered mildly NSFW] In the past, we’ve seen lists about all sorts of mythological creatures, including a list specifically about Filipino monsters. However, Japanese folklore seems to be a class apart from the rest of the world when it comes to supernatural beings that are bizarrely specific or simply insane. Here are a handful of the most unusual creatures from Japan. 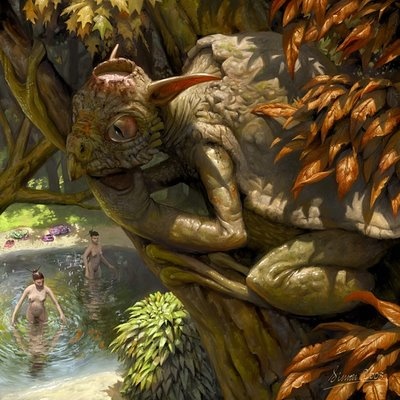 Now, at first glance, there’s nothing too ‘outlandish’ about a Kappa. It’s a little goblin-like creature, frequently referred to as a water monkey. A Kappa has a dent in its head that is full of water from its native spring. If the water spills out of its head, it looses its magical powers. Kappas generally drink blood but can be either good or evil. Kappas love to eat cucumbers and a family wishing to gain the favor of a kappa, or at least avoid its wrath, writes their names on a cucumber and throws it into the Kappa’s pond. The creatures are known for being polite and always keeping promises. The strange thing about Kappas in Japanese folktales is that there are over a dozen different, weirdly specific categories of Kappa. There are different names for one-eyed Kappas, hairy Kappas, cowardly Kappas, mountain-climbing Kappas, and even party animal Kappas. 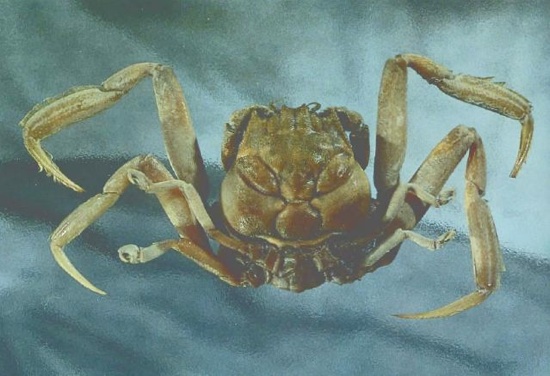 The Heikegani are on this list for one very cool reason: they actually exist. Heikegani Crabs are a species of arthropod native to Japan. Originally, Japanese myth states that these crabs bore the faces of Heike samurai that died in the battle of Dan-no-ura, and indeed, the bodies of these crabs do in fact resemble human faces. Carl Sagan proposed that, in the past, Japanese people only ate Heikegani crabs that didn’t resemble samurai faces, therefore ensuring that those with markings resembling a human face would survive and have offspring. Nowadays, most crabs have bodies resembling human faces; however, at a mere 1 or 2 inches in diameter, they’re not eaten very often. 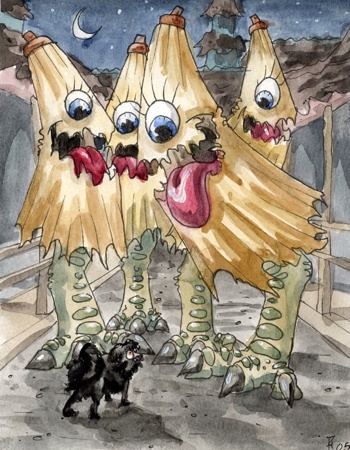 The Kasa-obake is a type of Tsukumogami – an object that spontaneously comes to life after existing for 100 years. The idea of inanimate objects spontaneously developing spirits after a certain amount of time seems reasonable enough when you consider how strange legends and folklore tend to be to begin with. The bizarre thing about the Kasa-obake is that, apparently, umbrellas were animating so often that someone eventually decided that they required their own name, just to separate them from other Tsukumogami. That’s right, Kasa-obake is the name of an animated parasol. 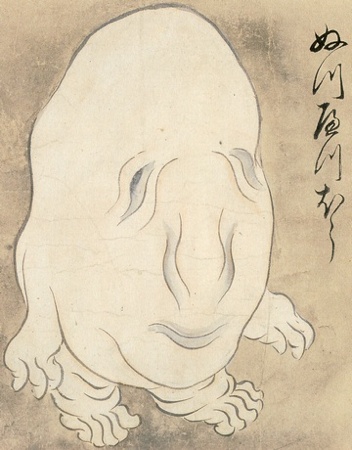 There’s not nearly enough information about the Nuppeppo to satisfy my curiosity. Nuppeppos are animated lumps of human flesh. They walk around on their own hands and are most often spotted in graveyards or deserted temple areas at midnight. Where do they come from? Why are they alive? Do they smell bad? Why do most images of them seem to be downright cute? We don’t have nearly enough information about this horror-film fodder. 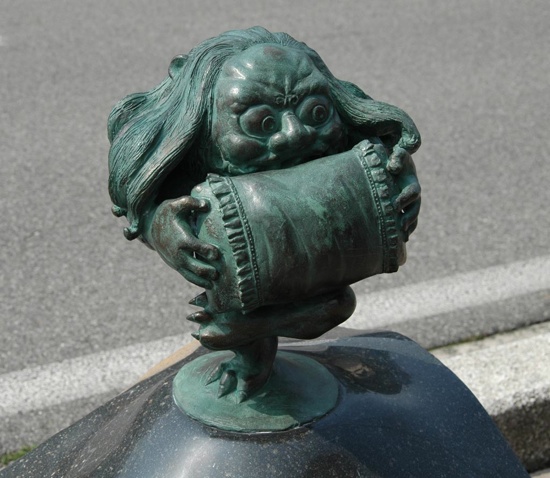 Here, we have another case of Japanese folklore being bizarre if for no other reason than its specificity. The Makura-gaeshi is a trickster spirit notorious for… moving pillows while people sleep. Some sources say they also sprinkle sand in the eyes and steal souls, but, really, what they’re known for is moving pillows. Stories don’t specify how far the pillows are moved, some sources claim that they move pillows all the way to the foot of the bed while the victim is peacefully asleep. 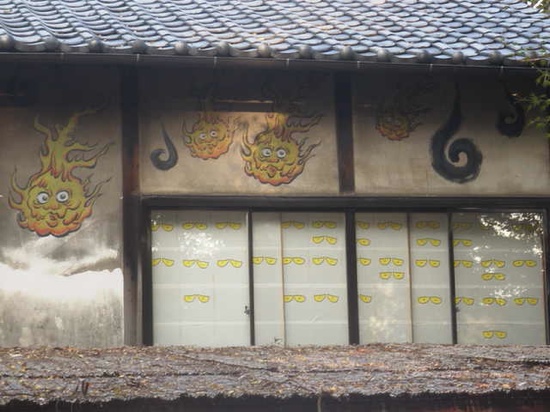 The mokomukuren is another example of a bizarrely specific creature. In ancient Japan, sliding walls made of paper were fairly common. Paper, however, can collect holes and become torn. A Mokumokuren is a spirit that inhabits a sliding paper wall with a hole in it. If the owner of the wall is careless, the wall may collect more holes, and the more holes there are in the wall, the more likely somebody is to notice the eyes if the Mokumokuren peeking out. This probably becomes a bit unnerving, over time, and the only way to get rid of a Mokumokuren is to repair the holes in the wall. 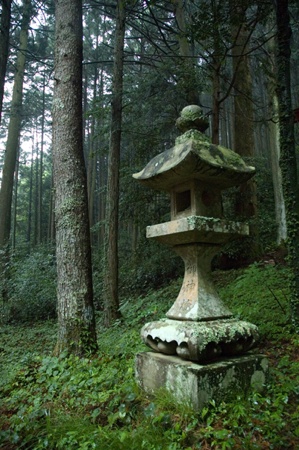 The Konak jiji is simply a malicious little creature. It takes the form of an infant and lurks in remote mountain areas, waiting for an innocent traveler to pass by. When a victim is in sight, the Konak jiji begins to cry. Now, it’s human nature to want to stop a baby from crying, and so most kindhearted travelers will seek out the wailing infant and, of course, make the fatal mistake of picking it up to comfort it. Once the Konak jiji is picked up, it grows unbearably heavy. Some sources say that they can grow up to over 350 kilograms in weight, enough to do serious damage to anybody holding them. Most of the time, it’s not possible to drop a Konak jiji because you become paralyzed once you pick it up. It’s not all bad, though – If you manage to survive the crushing weight of the Konak jiji, it may give you magical gifts. 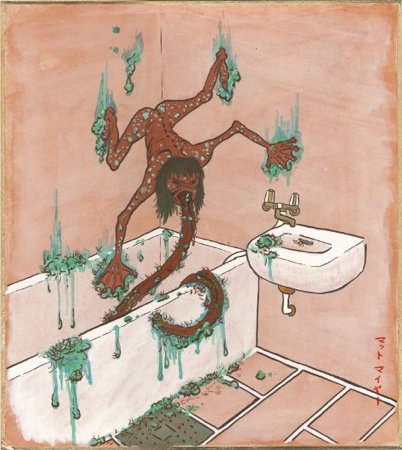 The Akaname is on this list because it is both bizarrely specific and bizarre in its own right. Akaname can be translated to ‘filth licker’, and that’s no misnomer. The Akaname is a hideous type of Japanese bogeyman that quite literally licks dirty bathrooms clean with its tongue and the aid of poisonous saliva. It is believed that the monster may have originated as a way for parents to motivate their children to keep the bathroom clean. 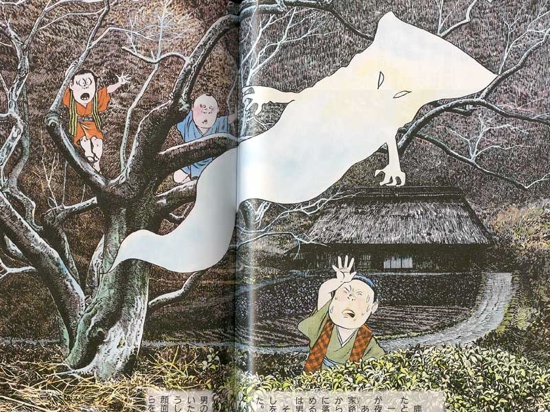 The Ittan momen looks harmless enough; after all, it’s only a strip of white cloth, oh, 33 feet long or so. It has a habit of flying around at night, which is a bit weird, but not too frightening. It’s not frightening, that is, until it becomes scared or frightened, or if it’s just plain evil. Then, it may wrap around your head and crush your skull or smother you to death. It’s not all bad, though- Ittan momen enjoy being worn by people who have gained their trust, although how, exactly, one gains the trust of a giant strip of cloth seems to be a mystery. 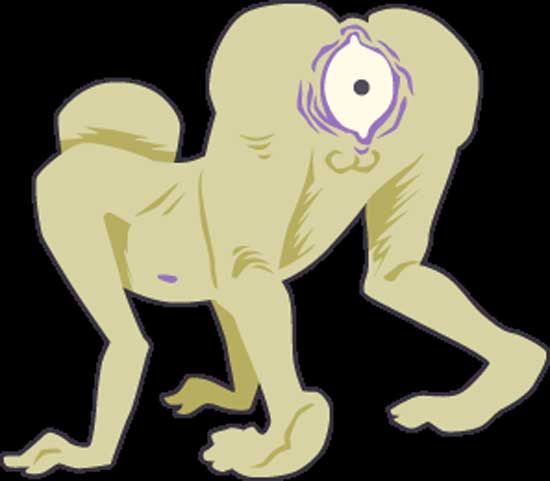 Time for something a little crass. Shirme was the name given to an apparition of a man with an eyeball where his anus should have been. Now, we’re not given much, if any information on why such an apparition should exist at all. In fact, there is only one recorded story of the Shirime, but the idea was apparently so well liked by the Japanese poet and artist Yosa Buson that he included it in several of his paintings of supernatural creatures. The story of the Shirime simply states that a lone samurai was walking down a road at night when somebody called to him. He turned, to see a mysterious man undressing and pointing at his derriere when a large, glittering eye opened from the indicated area. The samurai was, understandably, so horrified that he ran away screaming, and the Shirime was never seen again.