Britain has a long and varied past – it has been conquered repeatedly, it has conquered others, and it has colonized half the planet. Through its history, many strange traditions and festivals have arisen. This list looks at ten of the most unusual. 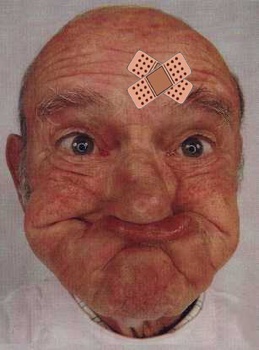 The Egremont Crab Fair – one of England’s weirder events – gets its name from crab apples rather than the marine variety. It started back in the 13th century when the Lord of the Manor gave away crab apples to the populace. In fact, to this day, the Parade of the Apple Cart, where apples are thrown into the crowds on the Main Street, is part of the fair. There are a host of other non-mechanized, traditional events – greasy pole climbing, a pipe smoking contests, a talent show, Cumberland wrestling, a hounds trail. But lets face it, the reason Egremont makes the news every year is the gurning competition. Home of the Gurning World Championships.

Gurning, involves a rubber-faced skill that is totally bizarre and unique to this part of England. Contestants put their heads through horse collar or braffin while they create the ugliest, most grotesque faces they can manage. A certain amount of skill is involved but a lot of beer and a certain amount of toothlessness probably has an impact as well. Celebrities occasionally have a go and the national news usually features the winning gurners. If you are in Cumbria visiting the Lake District, nearby, in September, stop in at the Egremont Crab Fair. You won’t see anything like this anywhere else and you won’t soon forget it. 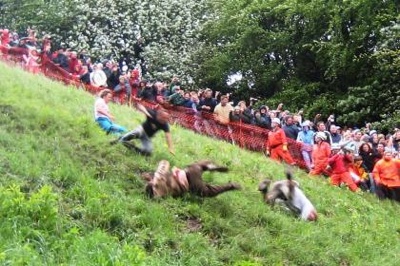 The Cooper’s Hill Cheese-Rolling and Wake is an annual event held on the Spring Bank Holiday at Cooper’s Hill near Gloucester in the Cotswolds region of England It is traditionally by and for the people of Brockworth – the local village, but now people from all over the world take part. The event takes its name from the hill on which it occurs. The 2010 event has been cancelled due to safety concerns over the number of people visiting the event but it is hoped that it will be held on the late May Bank Holiday in 2011. Due to the steepness and uneven surface of the hill there are usually a number of injuries, ranging from sprained ankles to broken bones and concussion. Cooper’s Hill Cheese Rolling has been summarized as “twenty young men chase a cheese off a cliff and tumble 200 yards to the bottom, where they are scraped up by paramedics and packed off to hospital”. 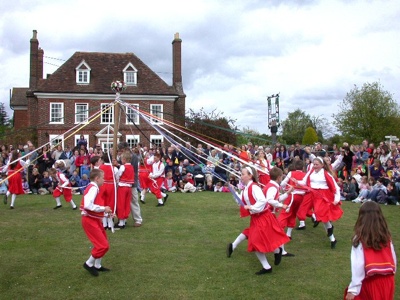 Maypole dancing is a form of folk dance from western Europe, especially England, Sweden, Galicia, Portugal and Germany, with two distinctive traditions. In the most widespread, dancers perform circle dances around a tall pole which is decorated with garlands, painted stripes, flowers, flags and other emblems. In the second most common form, dancers dance in a circle each holding a colored ribbon attached to a much smaller pole; the ribbons are intertwined and plaited either on to the pole itself or into a web around the pole. The dancers may then retrace their steps exactly in order to unravel the ribbons. 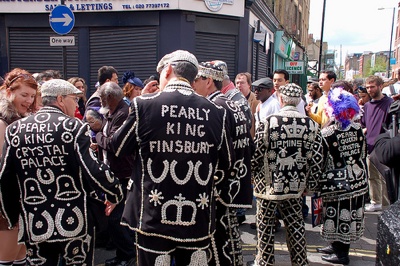 Pearly Kings and Queens, known as pearlies, are an organized charitable tradition of working class culture in London, England. The practice of wearing clothes decorated with pearl buttons originated in the 19th century. It is first associated with Henry Croft, an orphan street sweeper who collected money for charity. In 1911 an organized pearly society was formed in Finchley, north London. 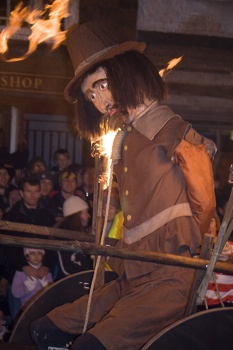 Guy Fawkes Night (or “bonfire night”), held on 5 November in the United Kingdom and some parts of the Commonwealth, is a commemoration of the plot, during which an effigy of Fawkes is burned, often accompanied by a fireworks display. The word “guy”, meaning “man” or “person”, is derived from his name. Guy Fawkes (13 April 1570 – 31 January 1606), also known as Guido Fawkes, the name he adopted while fighting for the Spanish in the Low Countries, belonged to a group of Catholic Restorationists from England who planned the Gunpowder Plot of 1605. Their aim was to displace Protestant rule by blowing up the Houses of Parliament while King James I and the entire Protestant, and even most of the Catholic, aristocracy and nobility were inside. The conspirators saw this as a necessary reaction to the systematic discrimination against English Catholics.

The Gunpowder Plot was led by Robert Catesby, but Fawkes was put in charge of its execution. He was arrested a few hours before the planned explosion, during a search of the cellars underneath Parliament in the early hours of 5 November prompted by the receipt of an anonymous warning letter. Basically it’s a celebration of the failed attempt to blow up the Houses of Parliament in Westminster. 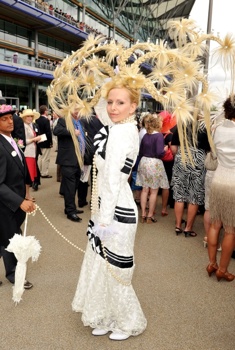 Ascot Racecourse is a famous English racecourse, located in the small town of Ascot, Berkshire, used for thoroughbred horse racing. It is one of the leading racecourses in the United Kingdom, hosting 9 of the UK’s 32 annual Group 1 races, the same number as Newmarket. The course is closely associated with the British Royal Family, being approximately six miles from Windsor Castle, and owned by the Crown Estate. Ascot today stages twenty-five days of racing over the course of the year, comprising sixteen Flat meetings held in the months of May and October. The Royal Meeting, held in June, remains a major draw, the highlight being the Ascot Gold Cup. The most prestigious race is the King George VI and Queen Elizabeth Stakes run over the course in July. What makes this so special is that every year the fashion, specifically the hats get bigger, bolder and damn right weirder as the photo illustrates. 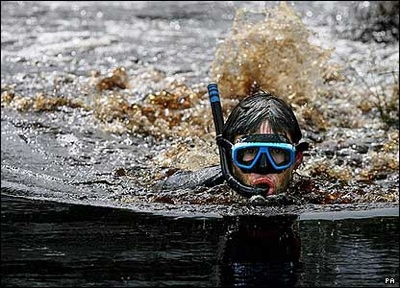 Yes indeed, you read correctly, bog snorkeling. If any of you ever doubted that us Brits are mad, this should make up your minds for you. Basically participants dive into a bog, wearing goggles, a pair of flippers and a snorkel, they then proceed to race each other along a 120ft trench filled with mud. Held every year the participants come from all over the world and raise lots of money for charity. 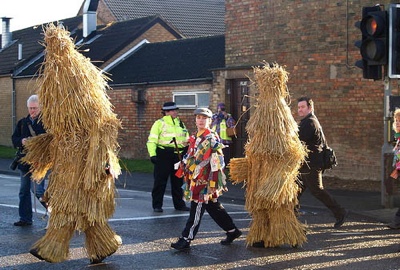 Straw Bear (Strawboer) Day is an old English tradition held on the 7th of January. It is known in a small area of Fenland on the borders of Huntingdonshire and Cambridgeshire, including Ramsey Mereside. This day is believed to be traditional start of agricultural year in England. A man or a boy wears a straw costume covering him from his head to toes. He goes from house to house where he dances. As prize for his dancing people give him money, food or beer. 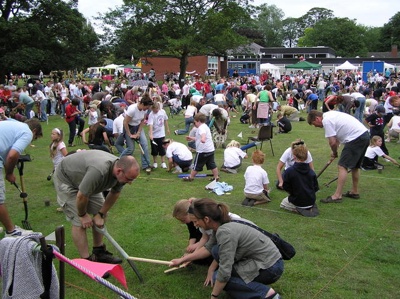 Worm charming is a way to of attracting earthworms from the ground. Many do it to collect bait for fishing. But there are also those who do it as sort of sport. The village of Willaston, near Nantwich, Cheshire is the place where since 1980 the annual World Championships have been organized. The competition was actually initiated by local man Tom Shufflebotham who on the 5th of July, 1980 charmed 511 worms from the ground in only half an hour. The competition has 18 rules. Here are just few of them. Each competitor competes in the 3 x 3 meters area. Music of any kind can be used to charm worms out of the ground. No drugs can be used! Water is considered to be a drug (stimulant). 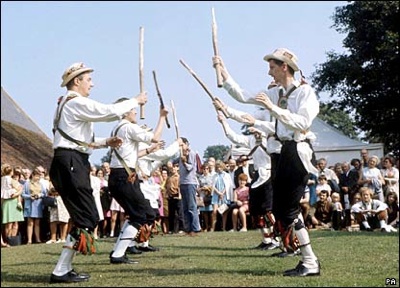 A Morris dance is a form of English folk dance usually accompanied by music. It is based on rhythmic stepping and the execution of choreographed figures by a group of dancers. Implements such as sticks, swords, and handkerchiefs may also be wielded by the dancers. In a small number of dances for one or two men, steps are performed near and across a pair of clay tobacco pipes laid across each other on the floor.