Have you ever wondered what the most bizarre phobias are? We’ve tackled this topic before, but this one includes some additional and strange phobias for you to consider, as long as you don’t have phobophobia—the fear of fears (or of developing one).

There are many different types of phobias that people have, and some can be pretty weird. Some fears may seem silly to others, but they can cause severe anxiety or even panic attacks for those who suffer from them. Here is a list of the top 10 weirdest phobias you might not have heard of!

This Is The Medical Fear Of Money | Phobias, Plutophobia, Medicine In A Minute #shorts

No, not the fear of the Disney character or the planet (or dwarf planet or whatever it is now). Plutophobia is the fear of wealth or wealthy people. Named for Pluto, the Roman god of wealth, this fear usually stems from low self-esteem and feelings that one does not deserve money or success in life. It could also arise from feeling as if there will never be enough money to go around, so it’s best not to want more than what one has already been given by their parents or family members.

People with this fear tend to feel unworthy and undeserving when surrounded by successful individuals who make more money than they do themselves. They often think these wealthier individuals look down on them because they don’t earn as much. This can cause significant discomfort not only in social settings among strangers but also when in the company of friends or co-workers.

Plutophobia can lead someone into depression if left untreated. It makes everyday interactions difficult, so often the person may isolate themselves, even from family and friends. In extreme cases, people experiencing plutophobia may have a strong distaste for someone who is rich and may even believe that they are the anti-Christ or that they are simply an evil person.[1]

Have you ever felt a sudden, deep-rooted fear of balloons?

Globophobia is the fear of balloons usually associated with the noise balloons make when popped. It’s a surprisingly common phobia, and it can be very debilitating for sufferers. If you have this phobia, even just seeing someone pop a balloon or hearing about it happening in the news can cause panic attacks and other symptoms similar to those experienced by people with arachnophobia (fear of spiders). Even the feel or smell of a balloon can be a trigger.

It’s not just balloons but also other round objects like balls and bubbles. It affects many and varies from person to person depending on how severe an issue with balloons has been experienced throughout childhood or adulthood. Luckily, most children overcome the phobia as they reach adulthood.

It’s not just children who are at risk either; adults may develop globophobic reactions upon seeing them again after years without having seen any—even watching one appear briefly on TV will do. Now, pair globophobia with coulrophobia—the fear of clowns—and you’ve got a perfect horror story. Oh wait, we’ve got that already. Thanks, Mr. King, for the jump scares!.[2]

Linonophobia: The Fear of String

A person with linonophobia will have an extreme reaction when even thinking of string, let alone seeing it in person. People who experience traumatic events and develop this phobia tend to avoid any association or connection between themselves and string, including knitting or tying a pair of tennis shoes. Their fear may even keep them from heading to the mall because they fear seeing strings on the clothes in the display windows (think drawstrings).

This phobia can be triggered by several different things, such as the sound or sight of string. Some people may even become anxious when they see something that looks like a string, such as yarn or thread, or even rope. Others will only experience symptoms when they are in contact with the string itself.

Lononophobia can sometimes develop after a negative association stemming from childhood where one may have been punished by being restrained—for example, when being punished (think of a mean babysitter) or even when playing games at summer camp like a three-legged race or capture the flag. However, some cases have been linked to genetics and family history, so there is no clear cause for why someone might develop this fear. So, I guess Silly String is a no-go for the party, then?[3]

People with pogonophobia are afraid of beards and may even have anxiety when looking at an image or talking to someone who has one. Pogonophobia stems from the Greek word pogon, meaning beard. They usually won’t make friends with someone sporting a beard as they possibly connect it to an alarming incident from their past where a bearded person caused them distress in some way.

People suffering from pogonophobia may also develop this fear out of the inability to grow one. They might also not like that a beard hides someone’s facial features or that the person is unhygienic, associating them with dirt, filth, and even homelessness. They experience anxiety around people with beards, which leads them to avoid bearded folk altogether. So, is there a fear of the man-bun too?[4]

Related to #7 is chaetophobia, the fear of hair. This phobia might be a fear of one’s own hair, the hair of others, or even animal hair. Chaetophobics may be terrified of brushing their own hair or even the hair on their own bodies. And forget about owning a cat—their fur plus the risk of hairballs. Yikes! They tend to avoid situations when other people touch their hair, and getting haircuts is typically difficult for them.

This fear may have developed as a result of an upsetting hair experience. A poor haircut or significant hair loss, such as becoming bald, are two examples. It might also result from someone feeling that hair is filthy, so they avoid touching it.

People with vestiphobia have an unrealistic fear of clothing. It comes from the Latin word vestis, which means clothing, garment, or covering, and can manifest in fear of a single garment or all apparel. The fear may stem from the material the garment is made from, like cotton or wool. For instance, if a person has an allergic reaction to the fabric, the anxiety associated with the response can lead to the phobia later in life.

Another source may be the fear of tight clothing, linking vestiphobia to claustrophobia or the fear of enclosed places. The inability to move or feeling restricted in movement can trigger this when wearing a tight-fitting pair of jeans or a too-small coat. The highest expression of this phobia can leave a person unable to wear clothing, leaving them little option but to remain at home, naked in self-isolation. That is until it’s acceptable to run to the Quick Mart in the buff![6] 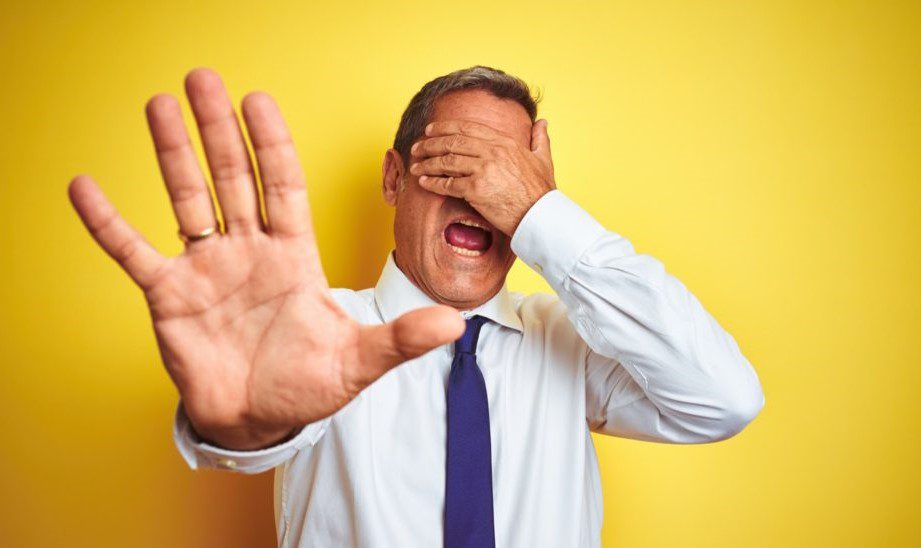 People with optophobia have an incapacitating fear of opening their eyes. An individual who suffers from this phobia may find it hard to go about daily life without opening their eyes at least once, even if only briefly, while looking for something. Generally, they may also prefer to stay indoors or in dimly lit areas.

Optophobic individuals often suffer from generalized anxiety disorder (GAD), which can develop after an incident causes these sufferers great distress—such as witnessing a traumatic event such as a loved one dying in a car accident. It can also be situational, a condition that some of you might experience this time of year. Ever watched a scary movie and had to cover your eyes for fear of having to watch what was on the screen? The thought of opening your eyes to watch can lead to heart palpitations, vomiting, and panic attacks. So maybe skip the horror movies this Halloween![7]

While many people grow up dreading math class, those suffering from arithmophobia have a genuine fear that can seriously impair their life. People with this anxiety usually experience feelings of unease and distress when exposed to numbers. It can be a general fear of all numbers or a specific number.

A person’s general fear of numbers can seriously affect their education and profession. Image trying to get a degree without having to do at least a little math. And many career paths would be anxiety-inducing—accountant, banker, or cashier.

The fear of a specific number tends to develop out of superstition or religious fears. Specific numbers hold power in many faiths around the world, while many believe in numerology. Unlucky numbers abound in various cultures around the world, especially the number 13 or 666 in the Western world. In China, Vietnam, and Japan, the number 4 is deemed unlucky as it sounds similar to the word “death” in those languages. Just like Western hotels don’t have a 13th floor, you might not be able to book a room on the fourth floor in Japan.[8] 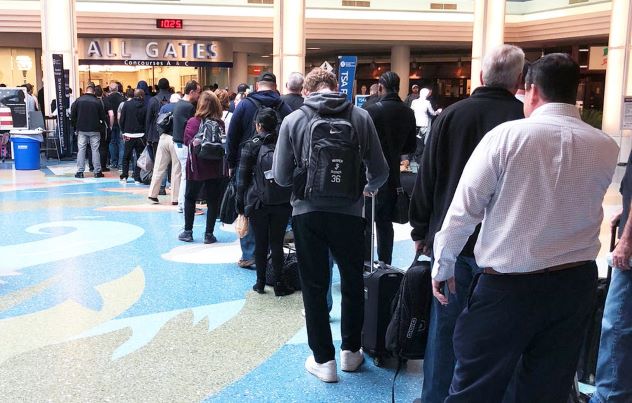 You walk into the bank or the DMV or the local fast food restaurant…and there’s a line. Which one do you stand in? For someone with agmenophobia, this could be a serious dilemma. Agmenophobia is the fear that the line you join will be slower than another one, leaving you waiting and waiting…and waiting. Faced with this decision, sometimes all a person can do is cross their fingers and hope they picked the right one.

The thought of choosing the wrong line—and we’ve all done it—can bring on sweating, anxiety, and panic attacks. Like many other phobias, the exact cause of the phobia is not known, but maybe it could be related to the idea of having to waste time that a person might not have by standing in a line that simply won’t move. Or the fear of not getting to the front of the line first. (You do compare your place to that of the person in the next queue over, right. Or is that just me?) Someone with agmenophobia can ease their anxiety by partnering up, sending a friend to stand in another line for them.[9]

Paraskevidekatriaphobia: Fear of Friday the 13th

Just in time for Halloween is the last entry on our list: paraskevidekatriaphobia. This is the fear of Friday the 13th. Stemming from another phobia from above, the fear of the number thirteen has roots dating as far back as ancient Sumeria—though not intentional. Hammurabi’s Code failed to include a 13th law, which some considered due to the number itself, though it was a simple clerical error. The number also has superstitious beginnings in Christianity and Norse mythology, both related to the 13th guest at a dinner. Many also carry a fear of Friday, which represents terrible events in history and folklore that occurred on that cursed day.

When the number 13 and the day Friday become linked is unknown, but it seems to have gained some steam after T.W. Lawson published his book Friday, the Thirteenth in 1907. To many, the fear of this day could be associated with a horrific event that occurred on a previous Friday, the 13th, whether it happened to them or someone else. When that day comes around on the calendar, a person’s anxiety may increase waiting for something terrible to happen, like the death of a loved one or being fired from their job. Sufferers may choose to stay home to avoid a triggering event. But don’t worry, we’re all safe for now as the next one doesn’t happen until May 2022.[10]