Everyone is familiar with brass knuckles, but history has given us a number of other fist weapons for the warrior who likes to do damage up close and personal instead of down the edge of a sword or the barrel of a gun. 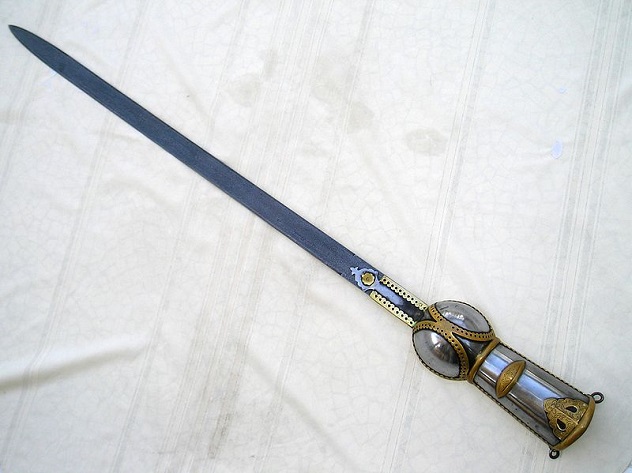 The pata was a weapon of Indian design first used by its ancient warrior caste, the Maratha, though it eventually spread throughout most of India. It was essentially a sword connected to a type of gauntlet, though instead of fingers or a mitt, it had a protective shell to shield the warrior’s hand from blows. The pata extended up the wrist to cover the entire forearm, offering complete coverage for at least half of the limb.

The blade, however, was attached directly to tip of the immobile shell and grasped with a bar grip. Since the pata was not made of separate pieces, this meant the Maratha warrior was unable to move his wrist, so all movement had to come from his elbow. It’s believed the weapon was used on horseback like a lance to punch out at the enemy, though the high position would have also made it easy to slash down at unmounted opponents.

Who needs hand weapons when you have range? Protect yourself from ninjas and bloodthirsty small game with the Arrow Precision Inferno Fury Crossbow Kit at Amazon.com! 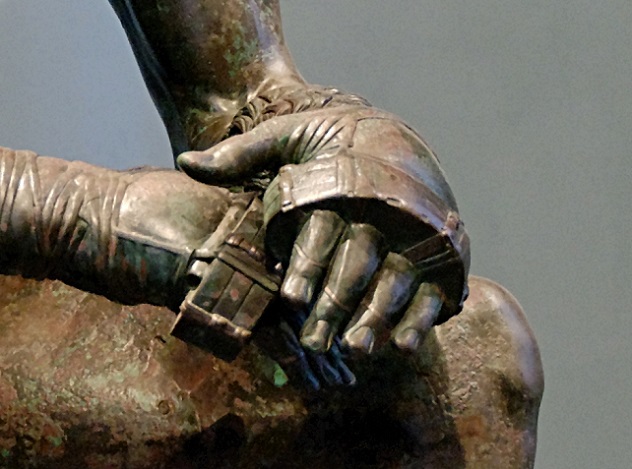 Roman boxing was often deadly. While even an empty-handed punch can prove fatal, Roman boxers augmented their bare fists with a weapon called a cestus. It was a type of glove that was often made of leather strips but plated with various kinds of metal to cause a bloodier match for the rabid Roman spectators.

Though slave matches could be fought to the death, free combatants could surrender and even agree to a brief truce to rest between beatings. Roman boxing was a brutal event with a brutal weapon, though, and if fighters didn’t yield or simply expire, they could take so much damage that it wasn’t unusual to finish matches disfigured.

Still, matches that intense apparently didn’t satisfy the battle-loving Romans, and an even more vicious weapon was developed from the cestus called the myrmex, or “limb piercer.” The “improved” version was similar to a horse spur worn over the hands that doubtlessly made for a bloody good time. 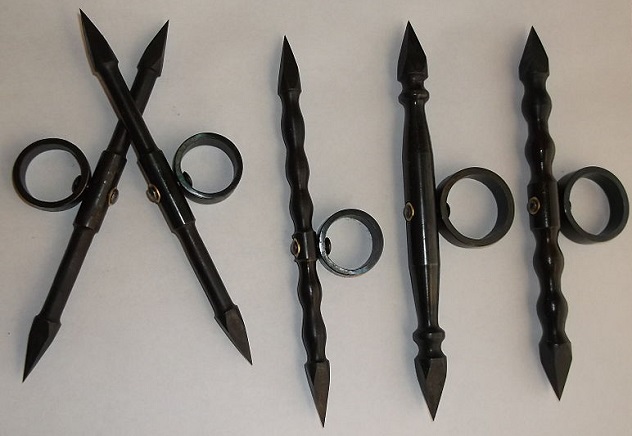 A simple but effective weapon once wielded by samurai, the suntetsu was a handheld iron bar that usually had a ring attached to the center. The ring was worn around the middle finger, with the bar being grasped in the palm. The ring could be fitted toward the side as well, in which case the opposite end would generally be thinner.

Perhaps because of its simplicity, the suntetsu was readily customizable. The ring could be spiked to add an extra punch, should the user prefer to simply strike out. Some suntetsu were even fitted with long spikes instead of rings for that very purpose, though these more vicious weapons would most likely have been used for assassination and not self-defense.

Suntetsu were generally used to attack an enemy’s vital points, and spiked ends were not required. Being a simple heavy iron rod with a ring attached, it also served as an excellent defense against many kinds of edged weapons. A samurai could quickly parry a thrust from a sword or dagger and then slam his suntetsu into his attacker’s throat to finish a fight. 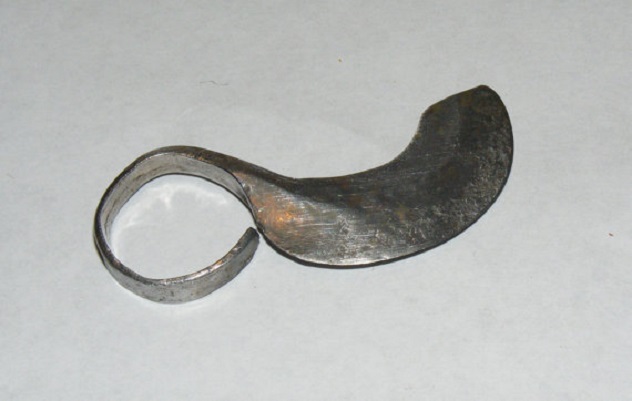 The Turkana people, as well as a number of neighboring communities, have been found to wear finger knives as both tools and weapons. These finger knives are known as corogat and are made of single pieces of iron and aluminum. The metal is wound into a ring shape while blades of varying sizes protrude from the fingers to make a crude but effective instrument.

Finger knives are mainly used for tasks like eating or tooth extraction. While not in use, larger ones are kept in simple hide sheaths to not cause any unintentional injury. They are useful tools kept ready for all occasions, but they also serve as very effective weapons. If a fight breaks out, the sheaths are removed and the finger knives become deadly piercing and cutting weapons for either causing lacerations and gouging out eyes. Another form of finger knife, called ngigolio, was so dangerous that while the area was under British colonial rule, they were banned for being too lethal. 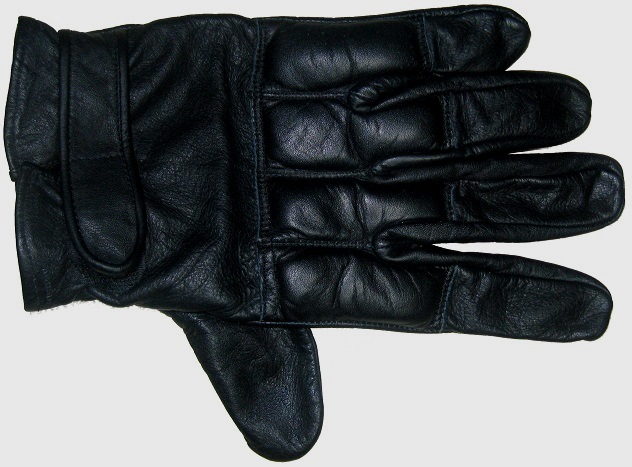 SAP gloves, also called weighted knuckle gloves, are non-lethal fist weapons often employed by security personnel. Bodyguards, bouncers, and law enforcement might keep a pair on hand in case fighting suddenly breaks out. At first glance, they appear to be normal gloves, but they conceal either metal plates or shot, which are sewn into the knuckles. Unlike weapons like brass knuckles, SAP gloves are actually meant to inflict less damage, not more, by ending a fight quickly and without causing serious injury.

Being lined with metal, SAP gloves also provide a good deal of protection for the wearer, saving the hand from harm even when punching hard surfaces. Usually made of kevlar, they can also partially resist cuts from blades or lacerations that would normally result from landing a punch on teeth. Aside from the plate in the knuckles, some come with metal sewn onto the back of the hand as well, which helps defend against blows. The gloves are legal in most states, unlike brass knuckles, which are categorized as more dangerous weapons. 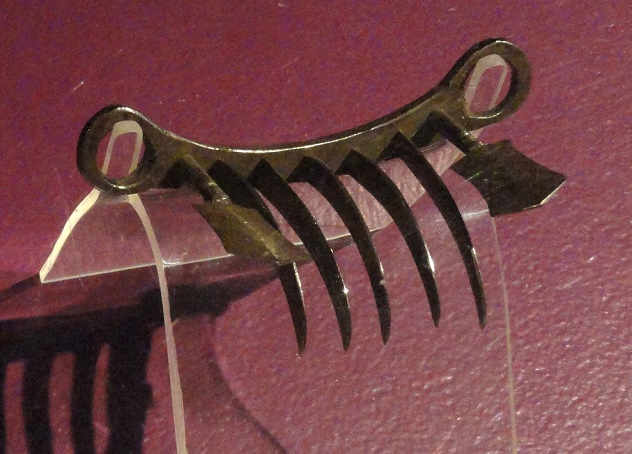 The bagh nakh was as symbolic a weapon as it was a deadly one. It was common in the Mysore region of India in the 1700s, where the supreme goddess was worshiped locally as a tiger. Bagh nakh, meaning “tiger claws,” represented the strength of the mighty demon-slaying goddess.

Apparently having no standard form except for the claws themselves, the weapon took many appearances. The most common manifestation was a combination bagh nakh and bichhwa, a type of knife also popular in the Mysore region. Just as the bagh nakh represented the ferocious strength of the tiger, the blade of the bichhwa, meaning “scorpion’s sting,” represented the deadly tail of the insect. The owner of such a weapon would have symbolically (if not literally) possessed the strength of both.

Although such a combo weapon would be difficult to hide, the bagh nakh itself was meant to be easily concealed. Shivaji, one of India’s greatest military heroes and founder of the kingdom of Maratha, once used a hidden bagh nakh to assassinate a rival general.

Buy your very own set of Tekagi-Shuko “Hand Tiger” Climbing Claws for only $13.52 at Amazon.com! 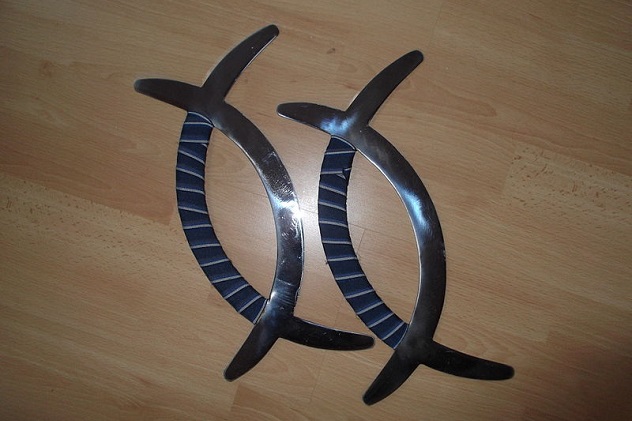 Deer horn knives were a formidable pair of Chinese weapons used by the creator of the Baguazhang school of kung fu, Dong Haichuan. It was said that Haichuan, a tax collector, relied on his knives to single-handedly take down entire gangs of highwaymen during his travels. His skill with his knives was so renowned that he was even sent to collect taxes beyond the Great Wall with only a single assistant.

Attacks with the blades are extensions of hand strikes. Wrists remain straight to exert the full power of the arm when using the formidable weapons. The techniques of use are based on Baguazhang unarmed techniques, and students only learned to use the exotic weapons after years of training in empty-handed forms due to the likelihood of self-injury.

Traditionally, students spent years learning the footwork of Baguazhang’s circling movements before they even began learning striking techniques. Only then did they move onto weapons, but they were required to master many simpler ones before the deer horn knives. Since they have several blades used while simultaneously circling the opponent, the deer horn knives were and are a particularly difficult weapon to master. 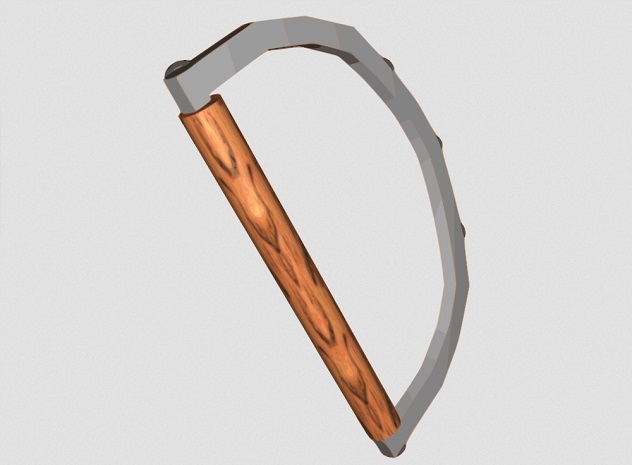 The tekko is an Okinawan weapon known locally as the “iron fist.” It evolved from an earlier weapon called the tek chu, the local version of the suntetsu. Early tekko were made of iron, hence their nickname, and were more advanced weapons. The handheld shaft of the tekko fit the user’s fingers for a firmer grip.

Unlike the tek chu, and very much like the common knuckleduster, it incorporated a band that wrapped around and protected the knuckles. The tekko had three spikes that were designed to be aimed at the bony areas in the body, like the ribs, joints, and collarbone. Should an opponent try to take the weapon away or grab the wielder’s forearm, a quick twist of the wrist would draw blood.

Tekko has its own forms within the greater style of karate. They use two of the weapons along with normal gripping techniques, which are easily performed while wearing a pair of iron fists. 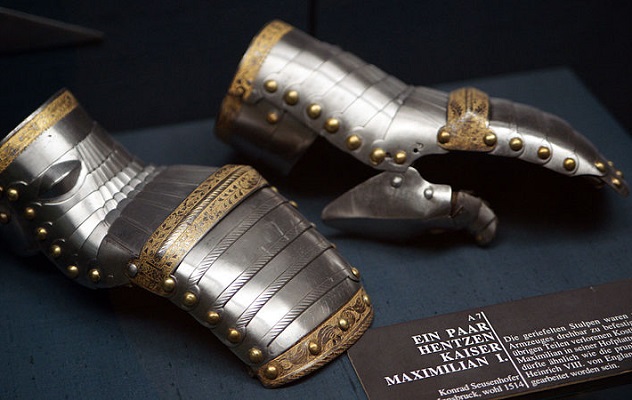 Anyone familiar with European knights is familiar with the armored gauntlet. While its main purpose was for defending the hand, its obvious potential as a fist weapon was not lost on its makers. In the late 14th century, armorers began attaching metal studs called gadlings to knights’ gauntlets. Gadlings were sometimes merely decorative, like the cat-shaped gadlings of the Black Prince Edward. For the most part, though, they served to turn a knight’s gauntlet into yet another weapon in his armory.

Most gadlings were spikes attached to the knuckles, creating a last-ditch weapon if a knight lost his main one. Depending on his opponents’ armor, a weaponless knight may have been able to land a hit on a vulnerable area with his gauntlet. On at least one occasion, and likely many others, a spiked gauntlet turned the tide of a battle. During a trial by combat administered before King Edward III, one participating knight accused of treason slammed his opponent’s face with his gadlings, turning the battle in his favor and winning him both the duel and his life. 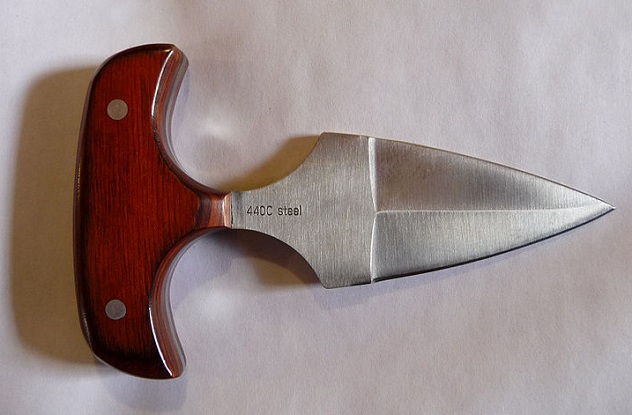 Once the scourge of New Orleans, the push dagger is a deadly fist weapon often concealed in the sleeve, belt, or boot. It’s fashioned after the ancient katar, though in the case of the push knife, the blade is attached directly to a handle that sits perpendicular to it. The blade’s base is narrow and has no edge so that it protrudes comfortably from between two fingers. It’s designed to be punched outward at soft tissue and thin enough to slip neatly into the ribcage.

The knife traveled down the Mississippi River with gamblers, where it was adopted by the criminal underworld of New Orleans. It was called the gimlet knife in that particular area because the shape is reminiscent of a drilling tool of the same name, and it became so common in New Orleans murders that the state of Louisiana had to outlaw them. The ban had little effect, however, and the knives remained common murder weapons.

It likely grew so popular because it was both easily concealable and easily removed from a sheath for a quick strike. That functionality was not lost on the armed forces of the world, and many soldiers carried push daggers into battle during both world wars for use in hand-to-hand combat.

Nathan keeps a Japan blog, where he writes about the sights, expat life, and Japanese culture in everyday items. You can also find him on Facebook and Twitter.