From recording events to damaging careers, cameras have made a huge impact on society. It sums up a whole story in a single image or a video. It serves as a preserver of memories and as a communications tool. This list gives you ten unorthodox yet fascinating things cameras have been used for. 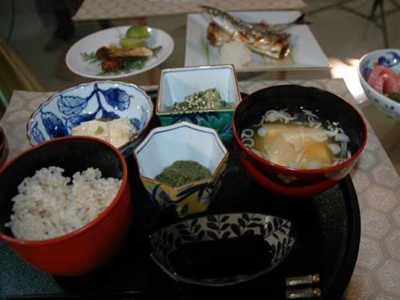 Dr. Yoshiro Nakamatsu is a Japanese inventor who claims to hold the world record for the most number of inventions, the most notable being the technology for floppy disks, the digital watch, Cinemascope and the taxicab meter. He is quite well-known, appearing in several American shows like Lifestyles of the Rich and Famous and Late Night with David Letterman. What puts him on this list is the fact that he won the 2005 Ig Nobel prize (an annual award that honors achievements that ‘first make people laugh, and then think’) for Nutrition. What did he do that made him won? For 34 straight years (and counting), he managed to photograph every meal he’s ever eaten, and after that, he analyses the nutrition content of his past meals. According to him, his goal is to live 144 years.

9
Capture a Slice of Life 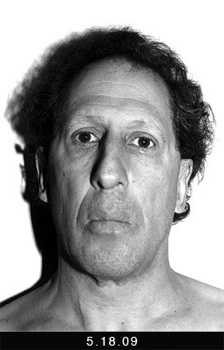 Every Day is an ongoing visual project created by U.S. artist Karl Baden. It involves him taking a photograph of his face on a daily basis. It started on February 23, 1987, and is still continuing today. According to Baden, the inspiration for this project ‘originates in the vectors of curiosity and distress tied to four factors’ that affected his life. These factors are mortality, incremental change, obsession (in relation to the psyche and art-making) and the difference between perfection and ‘being human.’

As for the method of capturing this ‘slice of life,’ the same setup was used for all the portraits taken: a single camera, with a tripod, strobe lighting and a white backdrop. The portraits were almost always the same, his face on the center, under the same lighting conditions, with minimal expression and distinct indicators of mood and/or personality.

Many times during the course of the project, Baden takes a series of his photographs and creates an installation with it. One example is 10x10x10, a series of eleven framed photos taken 10 months apart, beginning October 10, 1987, which was displayed in tandem with a book. It was displayed at the Robert Mann Gallery in New York from September 7 up until October 31, 1995. Also, during May 2007, he exhibited 7,305 contact prints of the photographs he had taken of himself to mark the 20th year of the project.

8
Serve as a Memory Aid 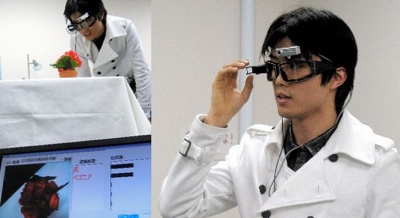 Ever had those annoying senior moments when you forgot where you put your car keys, or the remote control? With the Cyber Goggles, that will be a thing of the past. Designed by scientists at the University of Tokyo, the Cyber Goggles consists of a small compact camera and LCD screen connected to the goggles . These are connected to a small but ‘intelligent’ computer strapped on your back. To use it, focus the camera to an important object you want to find later, such as car keys, and say the name of the object. The computer records the image and connects it to the object’s name. When you want to find the object, just state its name and the computer will search its database, finding the right image to show, and then display it on the screen.

Although the goggles have technical flaws, the technology shows great promise in advancing the field of robotics. The image recognition technology that the goggles uses could help in the development of more human-like robots. It will not be available in your nearest tech store yet, but it is an interesting use of innovative technology. 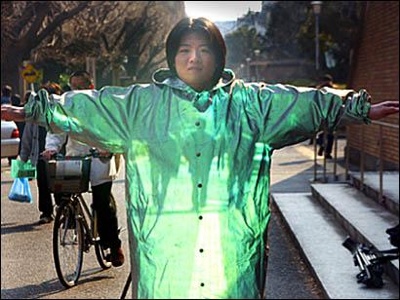 Speaking of the University of Tokyo, 3 professors from there demonstrated in 2003 that invisibility can be achieved. Well, sort of. Using a surprisingly complicated setup called that uses optical camouflage technology, Susumu Tachi, Masahiko Inami and Naoki Kawakami managed to create the illusion of invisibility. It involves the use of a video camera, a computer connected to a projector, and a special coat made of reflective material. What happens is, the camera, placed behind the coat, records the scenery behind whoever is wearing the coat, feeds it to a computer, and projects the scenery to the front of the coat wearer, making it seem that you can see through the coat-wearer. Voila, instant ‘invisibility’! Well, sort of. 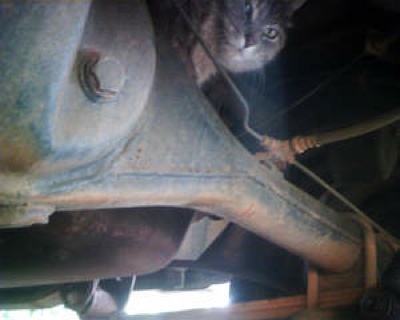 Cats are born wanderers. So naturally, the owners can sometimes get curious about their whereabouts. That happened to Jurgen Perthold and his pet tomcat, Mr. Lee. To fix the problem, Perthold came up with the CatCam, a 2-1/2 oz. camera attached to Mr. Lee’s collar, to help him record Mr Lee’s escapades. The camera, which takes photos every minute for a total of two days, has shown Mr. Lee with other cats, exploring the neighborhood, hiding under cars, walking down various gardens, and even meeting a snake. The photos of Mr. Lee’s ‘adventures’ soon attracted worldwide attention through Perthold’s website and started a fad, as other cat-owners started attaching their own CatCams to their pets.

5
Light over the Brooklyn Bridge

Improv Everywhere, a comedic performance art collective based in New York City, specializes in creating ‘scenes of chaos and joy in public places.’ They execute pranks, called missions, in various places in New York. Some examples are freezing in place in Grand Central Station, riding on the New York subway with no pants, swarming a Best Buy department store wearing Best Buy employee shirts, and many more.

One of their more interesting missions is the Camera Flash experiment. A week before the 125th birthday of the Brooklyn Bridge in May 2008, 700 Improv Everywhere agents lined up the length of the bridge, and flashed their cameras at the same time, creating an amazing wave of light that traversed the bridge. Although it was raining at that time, the mission was a success, although not many people get to see the flash up close. 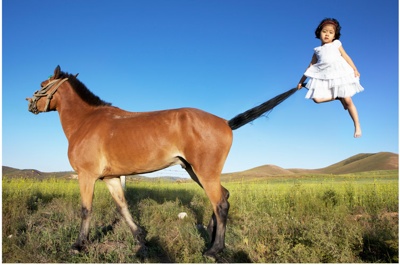 Li Wei, a Chinese contemporary artist from Beijing, combines performance art and photography in his stunning works of art, such as his series of photos that depict him in death-defying situations. For example, he made a series of photos of himself supposedly pushed off a skyscraper and free falling . He also made a startling series of photographs showing him landing headfirst on various surfaces such as sidewalks, windshields, and water. In fact, most of his photographs depict him (and other various models) defying gravity in some way. Most of Li Wei’s illusions were achieved with the use of invisible steel wires, a special mirror and Wei’s own acrobatic skills. 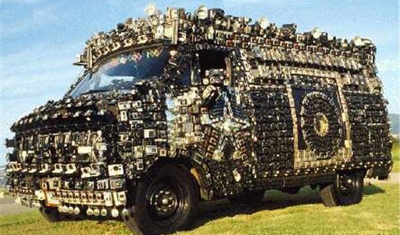 Harrod Blank is an American ‘art car’ artist, and is one of the people responsible for starting the so-called ‘art car’ movement in America. ‘Art cars,’ by the way, are cars whose appearances had been altered for artistic purposes. To combine his love for art cars and photography, Blank covered a 1972 Dodge van with 2,000 cameras, hiding ten working cameras around it that can be operated on the dashboard, and paraded it around the streets of New York City in 1995, while capturing over 5,000 pictures for a photography exhibit entitled ‘I’ve Got A Vision.’ 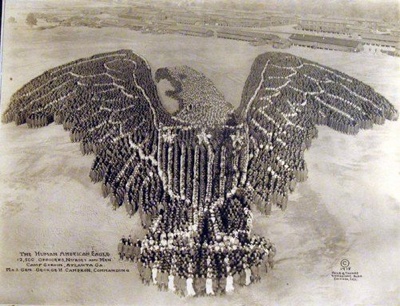 Arthur Mole, an English commercial artist, became famous for his series of ‘living pictures’ of thousands of soldiers forming various American patriotic symbols. Made during World War I, these live compositions were captured using a regular camera from an 80-ft tower. Mole would usually spend around a week planning and organizing each picture, with his partner John Thomas. He would direct the various troops to form an image according to a picture drawn on the camera’s lenses. After that, assistants would trace the outline of the image using long pieces of lace to approximate how many soldiers would he need for the photograph.

Mole’s, most famous photographs were the Human U.S. Shield, made with 30,000 men, The Human Liberty Bell, made with 25,000 men, Human Statue of Liberty, with 18,00 troops, and a portrait of then-president Woodrow Wilson made with 21,000 soldiers. 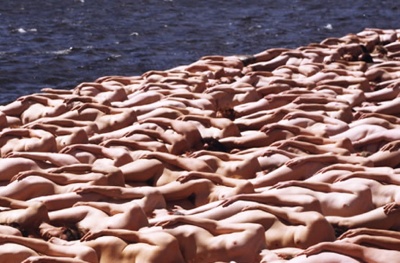 American artist Spencer Tunick tops the list for his work in ‘documenting the live nude figure in public.’ He is best known for his installations that depict large masses of nude people in various artistic positions in equally diverse public settings. His unique interest first began in New York in 1992, starting on single individual nudes or a small nude group. In 1994, he began documenting large groups in various temporary sites in the U.S. and abroad.

Since then his installations have travelled around the world, especially around Europe and South America. His largest installation involved photographing 18,000 nudes posed in Mexico City’s main square, the Zocalo, on May 6, 2007, which is more than double his previous record of 7,000 people in Barcelona. He is also often commissioned by various organizations to do special installations, such as Tunick’s installation of 600 nudes forming a living sculpture on the Aletsch Glacier in collaboration with Greenpeace, in an effort to draw attention to the effects of global warming, on glaciers on August 18, 2007.