Movies are supposed to be escapism. Viewers watch fantastical antics of larger than life characters. Some roles require less imagination. For these ten actors, they simply had to remember the most traumatizing experiences of their life. They give a whole new meaning to method actors.

10 Mercedes McCambridge was Forced to Relapse 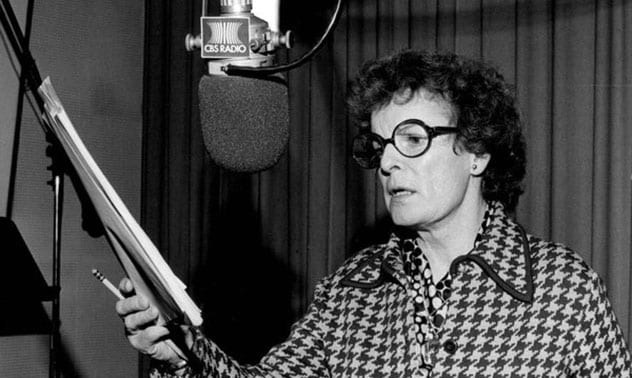 In her most famous role, Mercedes McCambridge is never seen. Her name does not even appear in the credits. She is merely heard. That was enough to become a legend.

McCambridge lent her voice to Pazuzu, the demon that possesses Linda Blair’s Regan MacNeil in 1973’s The Exorcist. It takes a lot of embody a Mesopotamian monster. To achieve the haunting guttural cries of the beast, director William Friedkin physically strained McCambridge to her breaking point. McCambridge was bound and gagged to a chair to induce anger and aggression. To achieve a gravelly voice, she was compelled to swallow raw eggs and chain smoke. Meanest of all, she was forced to drink whiskey shots.

In 1950, McCambridge married Fletcher Markle. The marriage dissolved in part because of McCambridge’s alcoholism. She was often hospitalized for drinking too much. In 1969, she finally achieved sobriety with help from Alcoholics Anonymous. William Friedkin, aware of this history, still made her drink on set. Four years of sobriety were gone. Luckily, McCambridge did not fall back in her old ways.

Oh, and in case you didn’t know, in 1987 her son was fired from his job on Friday 13th so he put on a wrinkled demonic halloween mask and shot his wife, children, and then himself. His suicide note laid the blame at his mother’s feet.[1]

Winona Ryder has fought villains as varied as Demogorgons, Beetlejuice, and Dracula. Her main enemy is something much more mundane, water. As a teenager, Ryder nearly drowned to death. Stemming from that accident, she developed crippling aquaphobia. She fell into a restrictive panic any time she had to get near water. For years, she completely avoided going into a pool or the ocean. She had to overcome that fear on the set of Alien: Resurrection.[2]

Conditions were less than ideal to alleviate a lifelong paranoia. The tank was murky from grime and flotsam. Even more experienced divers struggled to navigate the partially submerged kitchen set. As Ryder’s costar Ron Perlman swam underneath, props floated in his path. The set pieces blocked him from breaking the surface. On four separate occasions, rescue divers were deployed to save Perlman. Due to her personal history and the precarious conditions, Ryder was sent into a panic.[3]

8 The Displaced Cast of Casablanca 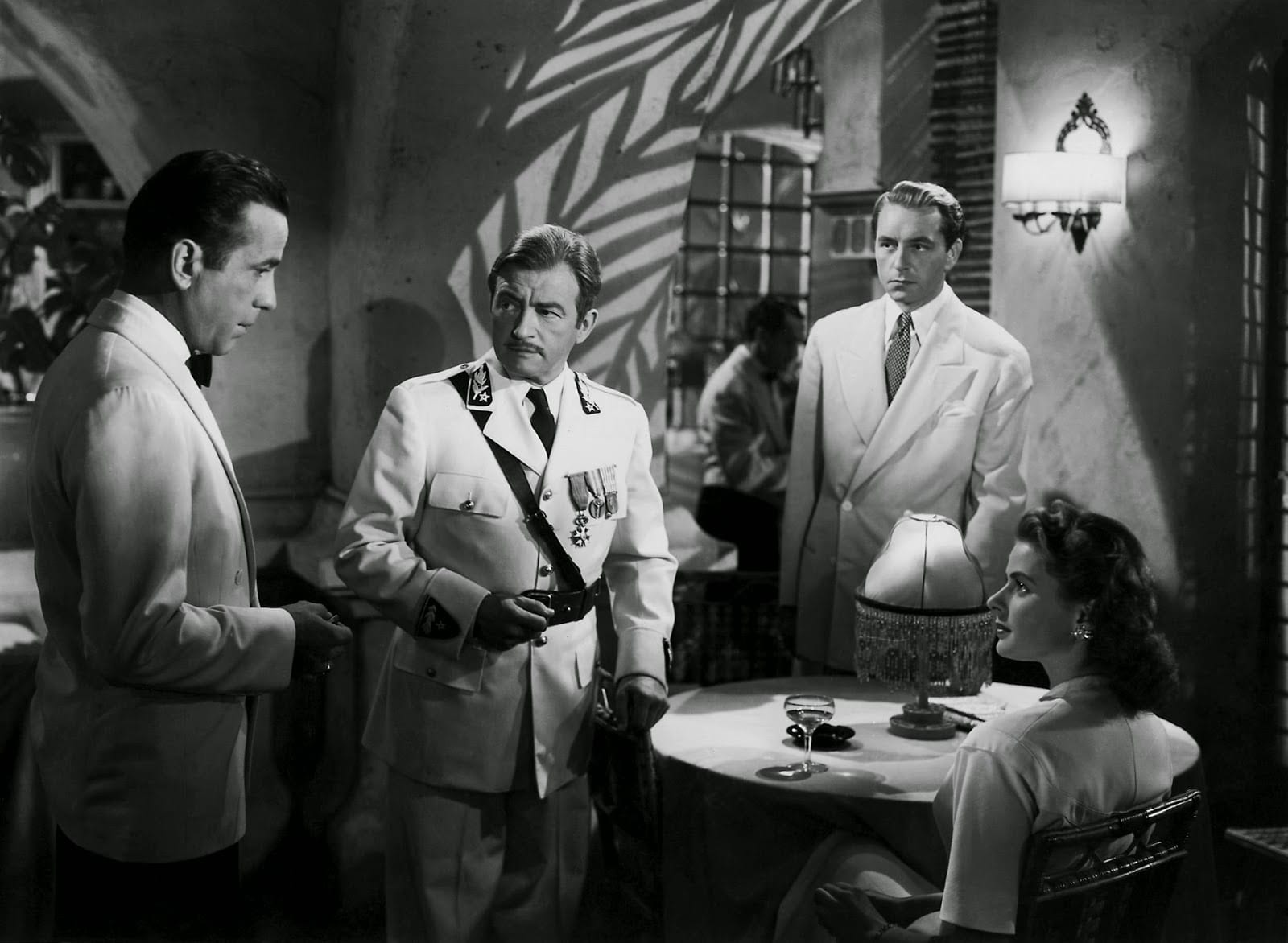 Nobody knew how the war was going to end. In 1942, the patrons of Rick’s café belted out a stirring rendition of La Marseillaise. Their version of the French anthem dwarfed the similar call for nationalism from their German occupants. For all they knew, it might have been a meaningless gesture. A group of refugees tried to humiliate the Nazis. It might have been a hallow victory. It still brought the cast to tears.

Almost all of the cast members were immigrants. A large portion of them were genuine refugees. Paul Henreid, an Austrian Jew, fled England after being labelled an enemy of the Nazi party. Conrad Veidt may have played SS officer Strasser, but he was still compelled to wear the racial label “Jude” in his native Germany. Madeleine Lebeau openly teared up while singing because she was reminded of her homeland. Both her and her husband Marcel Dalio evacuated Paris on the eve of the German occupation. S.Z. Sakall sang as his sisters and his niece were sent to the camps they eventually died in. La Marseillaise was a symbolic protest. For many of them, it was all they had.[4] 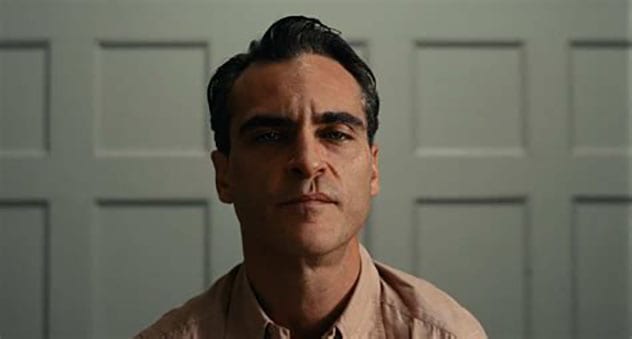 Director Paul Thomas Anderson insists that The Master is fictional. For legal reasons, he cannot say that the work is loosely based on the early years of the Church of Scientology. Main lead Joaquin Phoenix has not been as cagey. He openly admits which cult he was inspired by, the one he grew up in.

Like his character Freddie Quell, Joaquin’s parents were lost souls. They had grown tired of the complacency of post-War America. They were susceptible to the alluring charm of the Children of God. The Children of God are now infamous for promoting pedophilia and rampant sexual abuse. Phoenix’s experience was more positive. Along with his siblings Rain and River, Joaquin sang spirituals to raise funds for the religious sect. The organization earned a fortune, while the family lived in rat-infested huts. Before the worst elements of the church were uncovered, the family abandoned the group. The family discarded all reminders of their previous life. They dropped their surname “Bottom.” To signify their rebirth, they chose the name “Phoenix.”[5] 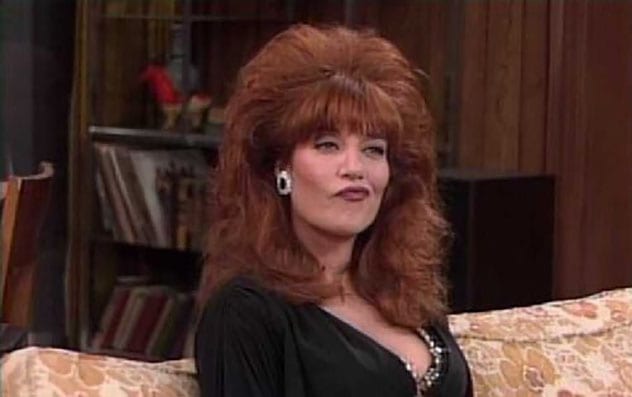 Married…With Children was not a show equipped with handling complex moral questions. Sometimes they barely wrote plots more complicated than thirty minutes of Al Bundy sitting around with his hand down his pants. When actual tragedy befell the cast, they reworked the entire show.

Season Six premiered with Peg Bundy revealing she was pregnant, much to her husband’s chagrin. Al spent much of the season worried about the financial strain of a new child. Luckily for him, it turns out the whole season arc was a dream. For Peg Bundy actress Katey Sagal, it was a nightmare.

Sagal spent most of the season noticeably pregnant. Unfortunately, she suffered a stillbirth eight months into the pregnancy. Out of sympathy, the storyline was adjusted so that she would not have to deal with an infant on set. Because they could not simply ignore that her character was supposed to have a child, the script made it all a dream. Even in that preferable option, she was still required to talk about a pregnancy that never rendered any child.[6] 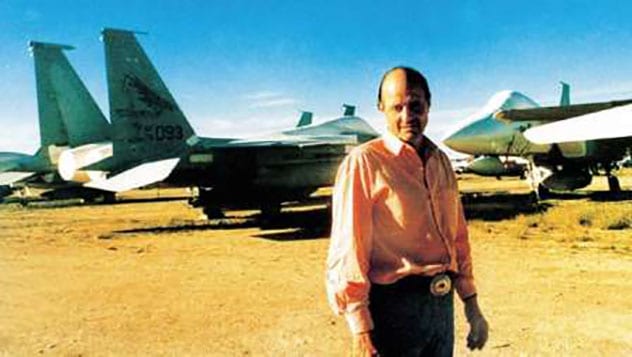 Werner Herzog is not known for his gentle touch as director. Commentators have labelled the German auteur’s eccentricities and grueling demands as torturous. For Lieutenant Dieter Dengler, that was not hyperbole.

Pilot Lt. Dengler crash-landed his plane into Laos during the Vietnam war. He endured imprisonment for months. Dengler’s determination resonated with Herzog. Herzog set out to capture Dengler’s story in the documentary Little Dieter Needs to Fly. To get a more authentic version of the story, Herzog coerced Dengler to recreate even the most grueling experiences. The handcuffed Dengler was compelled to march through the jungle. Cast members beat him with sticks. In the most traumatic scene, Dengler reenacted the scene were a Vietcong guard chopped off his fingers as punishment for stealing back his engagement ring. The scene was so authentic that the South Asian extras believed he needed medical attention.[7]

In 2007, Herzog remade the story as Rescue Dawn with Christian Bale playing Lt. Dieter Dengler. Apparently, he found a way to tell the story without resorting to physical torture.[8]

4 Rita Moreno Broke Down after a Rape Scene 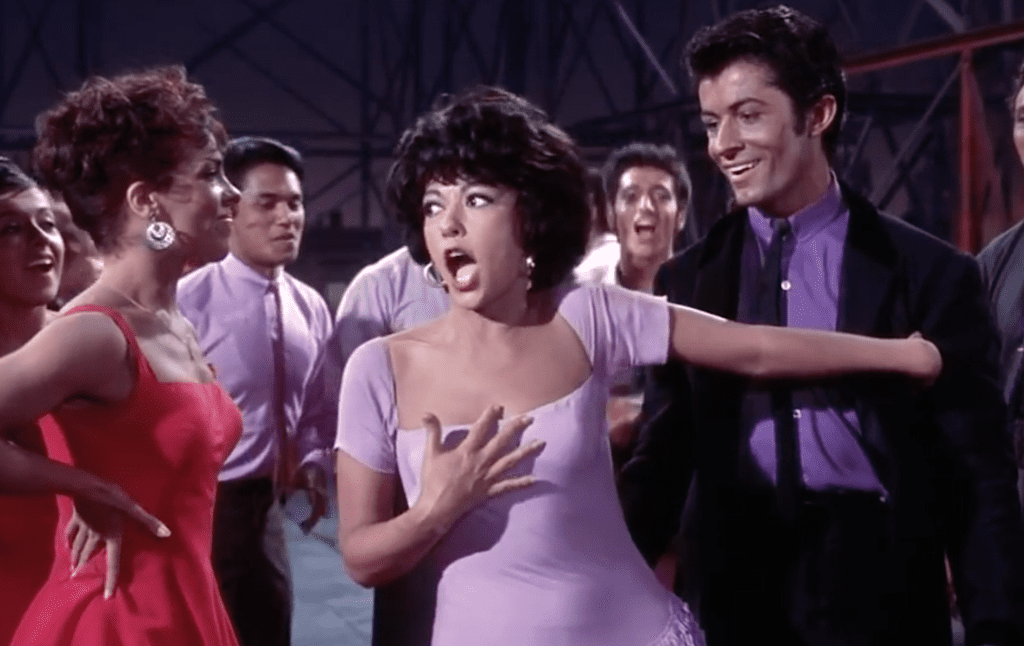 West Side Story is a wholesome love story of two people who would do everything they can to see each other. Tony and Maria may feel pretty, but much of the musical is a tale of street violence and racism. Anita, one of Maria’s friends, does not get the Hollywood ending. Her lover is murdered. The Jets reciprocate the violence. Even the musical street gangs are not fun to hang around.[9]

Despite what the lyrics may say, Puerto Rico was not the show’s devotion. There was only one Puerto Rican actress among the cast, Rita Moreno. Morena’s acclaimed portrayal of Anita earned her an Oscar. It was a hard-won trophy. Years before shooting, Morena was raped on two separate occasions. She was nearly raped again during the Columbia Studios afterparty for the movie. In between those startling events, she had to reenact it. Her pain rushed back in a scene where it is heavily implied that Anita is raped. The emotional experience forced Morena to breakdown on set. For 45 minutes, she cried on set after remembering her trauma.[10]

3 Dorothy Gibson Got Back on the Titanic 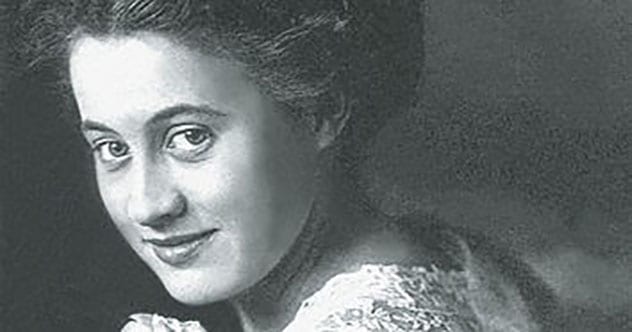 Dorothy Gibson could have waited. As Leonardo Dicaprio knows, people are still fascinated by the Titanic’s demise. Though less remembered than the 1997 blockbuster, the first movie about the ill-fated voyage was more impactful in one key aspect. It was filmed merely thirty days after the horrific incident. Bodies were still being recovered in the Atlantic by the time they started shooting.

Dorothy Gibson’s career was particularly pigeonholed by the calamity. Over two years, she made 25 movies. The penultimate one, Saved From the Titanic, is her most acclaimed performance. It is the most natural. Gibson was onboard the oceanliner when it sank into the midst. Director Étienne Arnaud wanted somebody who could capture the dread of nearly drowning. Only five days after she was pulled from the freezing water, Gibson was on set recreating her harrowing experience. She even wore the same clothes she had packed for the trip. The rushed production mostly focused on the narrow escape of the passengers on board. Today, the film is more remembered for failing to understand the concept of “too soon” more than any artistic genius.[11] 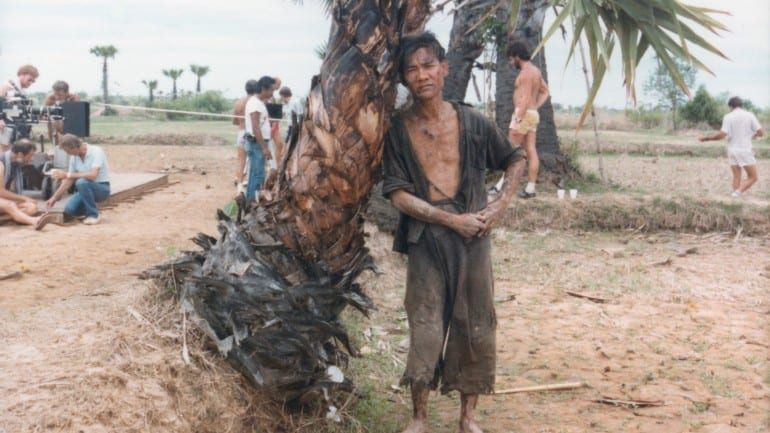 Haing S. Ngor was barely an actor. That is not an insult. Professionally, he was an employed as a surgeon. When he gave the Oscar winning performance of Dith Pran, Ngor did not have to get into the mind of a fictional character. He simply had to repeat his life. Punished for his education and class, Ngor spent years interned in the Cambodian camps. His first-hand knowledge shaped how he portrayed the character.[12]

1984’s Killing Fields is not a fun movie. The retelling of the Khmer Rouge reign is filled with gripping moments that showcase the worst horrors of the genocidal campaign. Yet, the moment that made Ngor cry the most was relatively banal. In one scene, a child soldier uproots a tomato plant that Pram grew. The unnecessary cruelty of the event was reminded Ngor of the callousness of his guards. Out of all the horrific sights in the movie, that was the one that show quickly people can be stripped of their humanity.[13] 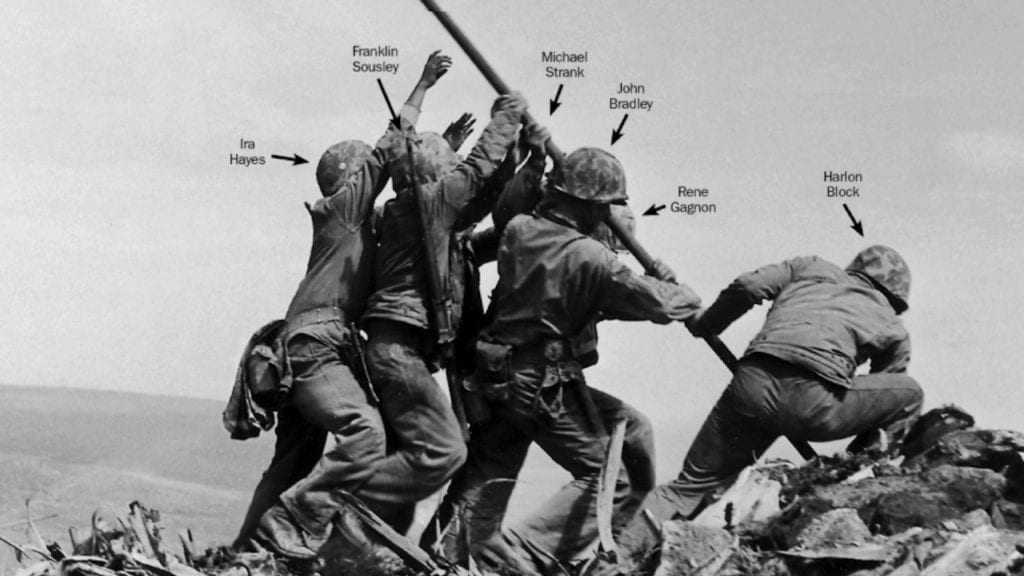 John Wayne wanted to honor Ira Hayes. Ira Hayes did not think he was worthy. Hayes will forever be remembered as one of the soldiers who raised the flag over Iwo Jima. When Hollywood was set to memorialize the iconic image in 1949’s Sands of Iwo Jima, they reached out to the three remaining survivors to recreate the shot. Ira Hayes could barely manage a cameo.

In the years after the battle, Hayes felt significant guilt. Following the flag raising, Hayes was ordered to return home. Joe Rosenthal’s photo had cemented Hayes as a hero, but he felt like he deserted his fellow soldiers to die. He grew to so resent being part of the iconography of the war. He confessed that “Sometimes I wish that guy had never made that picture.” Hayes treated his burgeoning shell shock with copious drinking. His alcoholism only became worse the more coverage he received. He was so inebriated on the set of Sands of Iwo Jima that they cut out his speaking parts. In January of 1955, his lifeless body was found on the ground. The 32-year-old veteran had died of exposure and alcohol poisoning.[14]

10 Brilliant Directors Who Were Notoriously Cruel

About The Author: If this was the worst moment of your life, you can write to Nate at his email, [email protected] To read more things he wrote, you can follow Nate on Twitter @nateyungman.