First off, apologies to all with coulrophobia (the fear of clowns) – this list is entirely dedicated to the subject. I am neither afraid nor a fan of clowns, but there is something about the concept which I find strangely unsettling. Even the happiest clowns seem to have something not quite right beneath the surface. Perhaps this is the reason that so many people are afraid of them. In this list we look at ten fictional and non-fictional clowns that should be familiar to most. 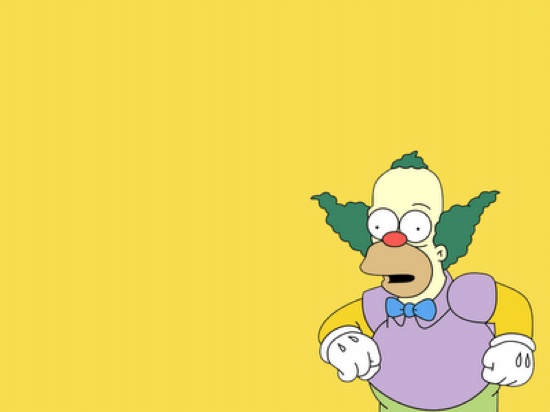 Krusty the clown should be well known to everyone reading this list. He is, of course, one of the characters from the popular television program The Simpsons. Krusty is famous for being loved by all the kids for his humorous antics on the screen, whilst being rather different offscreen. Krusty is a hard-living entertainment veteran, sometimes depicted as a jaded, burned out has-been, who has been down and out several times and remains addicted to gambling, cigarettes, alcohol, Percodan, Pepto-Bismol, and Xanax. He instantly becomes depressed as soon as the cameras stop rolling. Krusty wastes money almost as fast as he earns it: lighting his cigarettes with hundred-dollar bills; eating condor-egg omelets; spending huge sums on pornographic magazines; and losing a fortune gambling on everything from horse races to operas to betting against the Harlem Globetrotters. So why is Krusty on this list? For the simple reason that a person who takes copious amounts of drugs and booze, and sells products that kill (cereal with a jagged metal Krusty-O in each box) – can never be trusted! 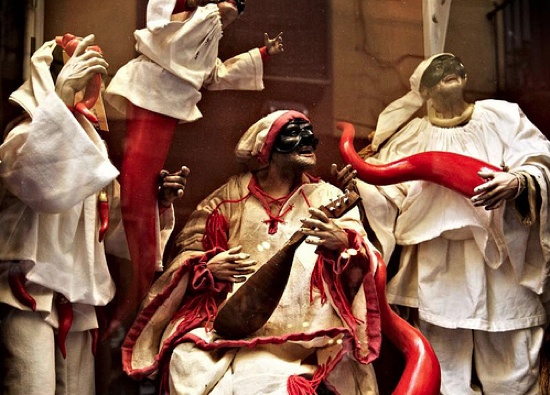 Pulcinella, (often called Punch or Punchinello in English) is a classical character that originated in the commedia dell’arte of the 17th century – a form of professional masked theatre. His main characteristic, from which he acquired his name, is his extremely long nose, which resembles a beak. His traditional temperament is to be mean, vicious, and crafty: his main mode of defense is to pretend to be too stupid to know what’s going on, and his secondary mode is to physically beat people. Pulcinella has appeared in a round about way in modern fiction as well; Konrad Beezo and his son Punchinello are the antagonists in the novel Life Expectancy, by Dean Koontz. While by no means the most evil of clowns on this list, Pulcinella can be said to be a progenitor of the evil clown genre and definitely deserves an entry here. 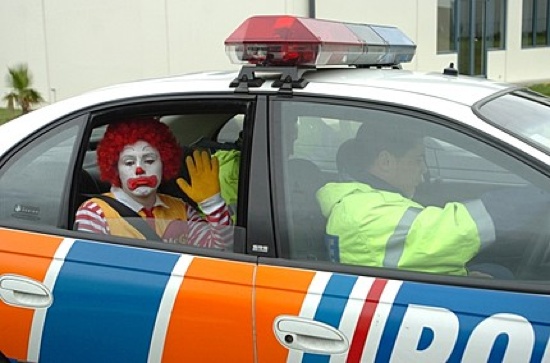 This is no joke. Ronald McDonald, the famous mascot for the fast food joint is a clown you don’t want to mess with! The reason, however, is slightly different from some of the other entries here. Most countries with McDonald’s have a Ronald McDonald actor who will often be hired for children’t parties. Because he is so famous and drives kids wild, he travels with an entourage of bodyguards – other McDonald’s staff who are trained in the job. Now this is where the danger comes in. If you are a kid and you get too close to Ronald, the bodyguards are trained to keep you back – with violence. My cousin was trained as a bodyguard and the methods he was taught included pinching children and stamping on their feet. So remember – next time you see Ronald, keep your distance. You might end up injured. Incidentally, in case you can’t tell, the photo above is of Ronald McDonald being arrested by the New Zealand police. 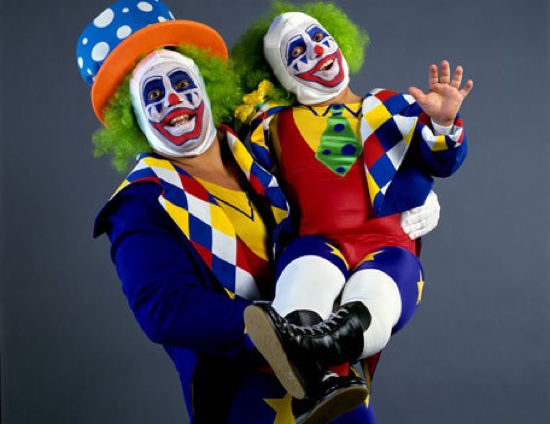 In the early 1990s, an evil clown character was featured in the World Wrestling Federation (WWF). Doink the Clown was portrayed as a villain early on in his career. He would do cruel things such as pop children’s balloons with a cigar, splash water on the audience, and use a fake prosthetic arm to attack opponents. Once he even attacked an opponent with a car battery. His entrance theme music was a typical happy circus tune (“Entrance of the Gladiators”) which would quickly segue into dark and menacing music, complete with evil cackling sound effects. 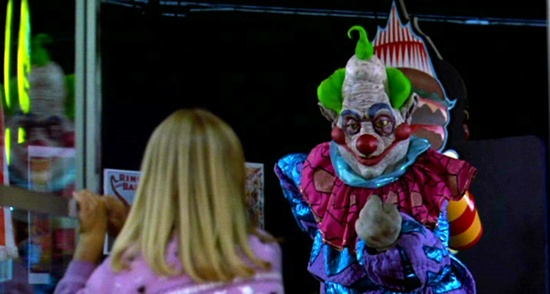 A list like this would not be complete without the Killer Clowns from Outer Space who star in the movie of the same name. An army of sadistic extraterrestrial life forms (who resemble clowns) land their circus tent ship in the sleepy American town of Crescent Cove. The Klown Army advances into Crescent Cove, inflicting a genocide during their occupation. They harvest the unsuspecting population, blasting random victims with a ray gun that cocoons them with cotton candy, with lethal results. The Klown Army uses a variety of seemingly innocent methods to ensnare their victims such as killer shadow puppets, bloodhound-like balloon animals and a ray gun that looks like a child’s toy. Since the methods themselves appear whimsical, the townspeople don’t know they are in danger until it’s too late. It isn’t quality, it isn’t serious, but it sure is ridiculously funny. 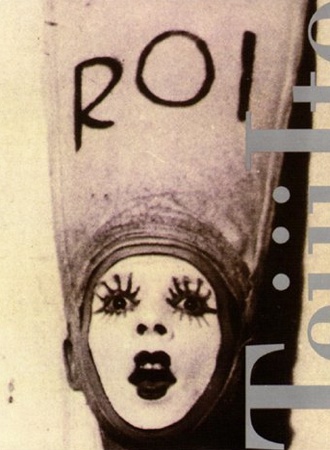 Ubu Roi (King Ubu) is a play by Alfred Jarry, premiered in 1896. It is one of the precursors to the Theatre of the Absurd and the greater surrealist art movement of the early twentieth century. The main character Ubu (who is certainly a clown-like figure) lives in a world of greedy self-gratification. He is an antihero — fat, ugly, vulgar, gluttonous, grandiose, dishonest, stupid, jejune, voracious, cruel, cowardly and evil. Like Macbeth, Ubu murders the king who helped him on the urging of his wife, usurps his throne and is in turn defeated and killed by his son. In its first performance, after only the first word (“merdre”, the French word for “shit”, with an extra “R”) a riot broke out and the play was banned from the stage so it moved to a puppet theatre. It has since had a very popular revival in theatre. 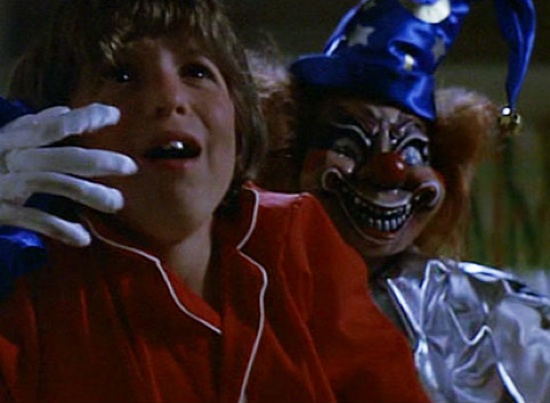 Those of you who have seen the excellent horror series “Poltergeist” will remember the clown scene in which the young boy is assaulted by his toy clown. There is not a great deal of information available on this scene but the image above should suffice to remind you all how horrifying it was. The scene has been parodied in both Family Guy and Scary Movie 2 (in which the clown sexually assaults his victim). The famous clown scene is not the best in the film, but it is certainly one that makes it worth seeing. 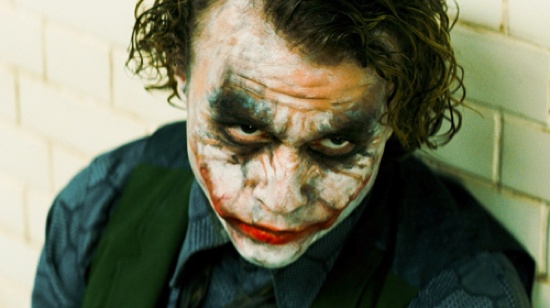 The Joker is the famous wicked character from the Batman stories. Probably the most sinister portrayal of the character was the most recent by the late Heath Ledger who managed to bring a much more believable evil to the screen. Throughout his original comic book appearances, the Joker was portrayed as a master criminal whose characterization varied from that of a violent psychopath to a goofy trickster-thief. His appearance is not typical of most clowns but he shares sufficient traits with them that he should certainly to be included in the genre. The origin of his looks varies from source to source, but the most common is that he fell into a vat of chemical waste which bleached his skin, turned his hair green, and made his lips bright red. 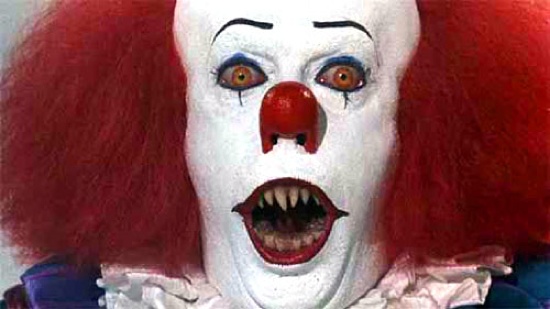 Pennywise is the shapeshifting eponymous character from the Stephen King book It. In the overall scheme of King’s writing, It comes from part of the greater universe that also encompasses some of his other writings. While It appears mainly as a clown (particularly when stalking children) it also appears as a giant spider. Humans never truly see its full form as it “naturally” exists beyond the physical realm in a place called the “deadlights”. Every thirty years, It comes back to life to terrorize and destroy. At the end of the novel, It is revealed to be female and it lays eggs. 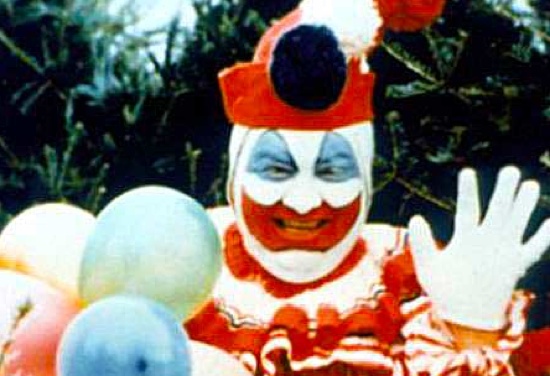 Pogo had to be number one on this list for one very good reason: if you messed with him, you really would end up dead. Pogo was the name of the clown character used by John Wayne Gacy to make connections with young men so he could rape, torture, and murder them. Gacy taught himself how to apply clown makeup and made all his own costumes. In a strangely ironic way, he intentionally painted his mouth with sharp corners instead of the normal round corners which are generally preferred so as to not frighten children. Gacy performed countless times at local children’s parties and hospitals. There is no doubt he epitomizes the concept of the “evil clown”. Pogo’s death toll is 25 – 30.