Sports are fun to play but they are also just as fun to watch thanks to a rich history of crazy fans and sports-specific or even team-specific traditions that have spanned across the decades. So while we fans aren’t scoring the game-winning goal, we still get heavily involved in the sport and in our teams through a number of ways. Below are just ten of the many traditions that have defined the “sport” of watching sports. By no means is this a comprehensive list – it was hard enough just narrowing down the list to ten even when I limited myself to only professional sports – so feel free to include any traditions, rituals and/or superstitions you want to share in the comments! 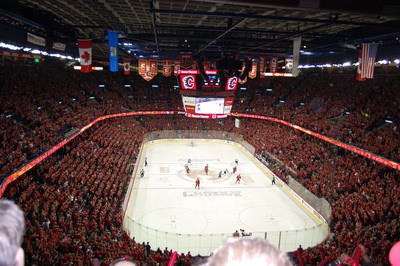 The best way to show support for your favorite team is to proudly wear the team colors. Greater solidarity comes from tens of thousands of your fellow sports fanatics all wearing the same color. Its beginnings may have come from the NHL’s Calgary Flames during the 1986 Stanley Cup Finals. The Edmonton Oilers’s fans were in the midst of “Hat Trick Fever” as they tried to win their third consecutive championship. In response to Hat Trick Fever, Calgary promoted “C of Red” to encourage their fans to come dressed in entirely red. During next year’s first round playoffs, Calgary’s opponent responded with the “Winnipeg White Out”. Now it is extremely popular in US Universities like Penn State’s Code Blue and Virginia Tech’s Orange/Maroon Effect. 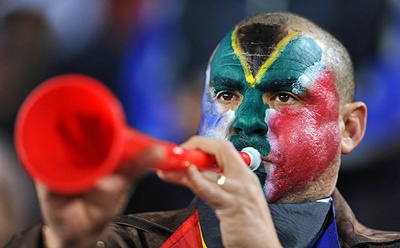 This is a fairly recent fixture in the FIFA scene even though the vuvuzela has been popular in South African games since the 1990s. The vuvuzela is a simply blow horn originally made of tin but mass-produced in plastic for games. Blowing through the mouth as you would a trumpet, the vuvuzela emits a loud monotone note similar to elephant trumpets. It’s stirred up some controversy because there are many who are trying to have them banned from the upcoming 2010 World Cup. The complains range from “too loud” to “not fit for a sports arena.” The vuvuzela supporters say that it doesn’t detract from the game anymore than anything else that fans have with them and that it is a strong part of the South African culture. 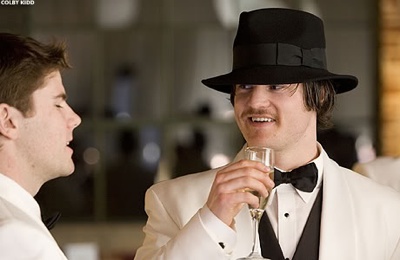 This popular hockey tradition may have gotten its inspiration from the sport of cricket. In cricket, a hat trick happens when a bowler dismisses three batsmen with consecutive deliveries. The custom crossed over to hockey with Ontario’s Biltmore Mad Hatters. When one of the players scored three goals in a game, the team owner Mr. Biltmore would present him with a new fedora. Many stories describe Mr. Biltmore throwing his top hat onto the ice to salute the player and soon enough, the fans also tossed their own hats onto the ice. After they are collected, the hats are either donated, thrown away or saved for a gigantic transparent case that showcases the franchise’s hat trick history. 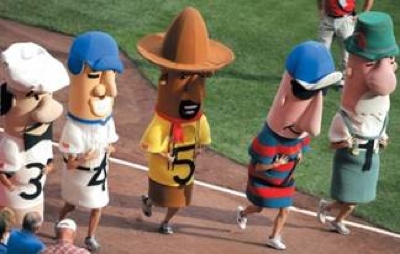 During intermissions, many fans will race to the concession stand to grab some more food before the game resumes. In certain stadiums, the food does the running! The most famous is the Klement’s Sausage Race at Miller Park (home of the MLB’s Milwaukee Brewers). The tradition began in the early 90s as a computer animation race on the scoreboard but they made their first live appearance in 1994. At the bottom of the sixth inning of every Milwaukee Brewers home game, employees of Miller Park and a select few highly honored guest wieners don the seven foot three inch foam costumes and race from third base down to home plate and back up to first base. To date there are five sausages: Brett Wurst the bratwurst, Stosh the Polish sausage, Guido the Italian sausage, Frankie Furter the hot dog and Cinco the Chorizo. Bratwurst is currently the race leader with eighteen wins. The race gained fame outside of baseball in July 2003 when then-Pittsburgh Pirate Randall Simon used a bat to hit Guido (worn by employee Mandy Block) on the sausage’s head. Given where he hit Guido, the bat never came near Mandy Block’s head but since the costume is so top-heavy, Guido easy fell down and took Hot Dog down as well. Simon was arrested, given a fine and suspended by the MLB for three games. Despite reprimands by the authorities, some found the situation comical. Mandy Block asked for Simon’s autograph on the infamous bat and t-shirt companies made a tidy profit with shirts saying “Don’t whack our weiner!” 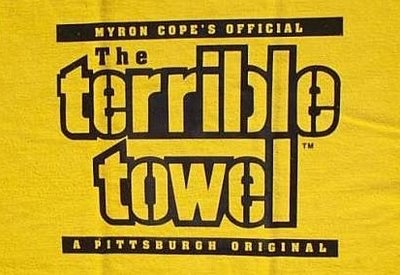 The Terrible Towel is as much a symbol of the NFL’s Pittsburgh Steelers as their three-star logo. Its creation comes from the mid-1970s after the Steelers won their first ever Super Bowl in 1974 and were strong contenders at the 1975 playoffs after winning twelve of fourteen games during the regular season. Around that time, general manager Ted Atkins, sales manager Larry Gerrett and broadcaster Myron Cope brainstormed ideas to market of the team’s success. The first idea was a mask of head coach Chuck Noll but was dismissed due to price issues. The next idea was the more cost-effective “Terrible Towel” because it was cheap, durable and easy to carry around. They had less than two weeks to promote the Terrible Towel so Myron Cope went on TV and radio telling people to bring, buy or dye a dish towel yellow, gold or black. By the next game, somewhere between 30,000-50,000 fans were spinning towels over their heads and the numbers have only grown since then. The following year, the Steeler’s franchise printed the official Terrible Towel image onto bright yellow towels and the tradition became official. All proceeds from Terrible Towel sales go to the Allegheny Valley School, which is “a residential and educational facility for children and adults with intellectual and developmental disabilities.” To date, the Terrible Towel has made over $2.5 million for the Allegheny Valley School. 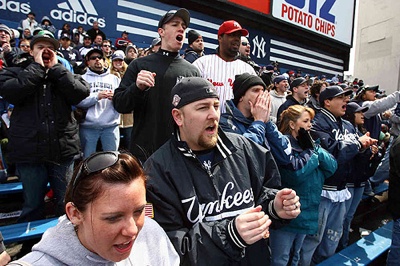 At the old Yankee baseball Stadium, the fans in section 39 had a history of bad behavior. They heckled visiting teams and high school marching band students, they ignored the warnings of stadium ushers, and they even badgered fellow Yankee fans who weren’t part of their tight-knit group known as the Bleacher Creatures. As a result of the bad attitudes, section 39 lacked access to the rest of the stadium and beer sales were banned in just that area. However, negotiations between the Yankee organization and the Bleacher Creatures ensured that the group would get to sit together in section 203 of the new Yankee Stadium in exchange for a some changes to a few of their more belligerent Bleacher Creature traditions. Now seen more as ‘extremely loyal fans’ rather than a group of nasty hecklers, Yankee home games aren’t really complete until they deliver their Bleacher Roll Call. At the top of the first inning, “Bald Vinny” Milano shouts the name of a Yankee player and the entire section will chant that particular baseball player’s name until he recognizes the Bleacher Creatures with a wave or salute. They will go down lineup until every Yankee player is called. 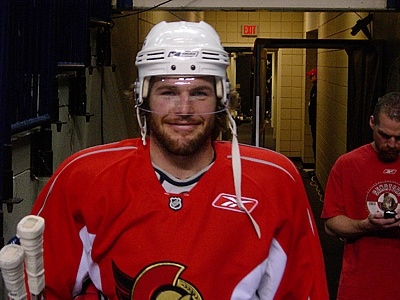 This is a tradition that started with the NHL’s New York Islanders. From 1980 to 1983, the team won the championship and lifted Lord Stanley’s cup high above their whiskered faces. Since then, many teams and their fans have put away the razorblade for the duration of their playoff run. In addition to discussing team strategies and playoff series, fans also get into debates over which players can grow the best, worst or the most nonexistent playoff beard. Many teams will also sponsor Beard-A-Thons in which players and fans grow a playoff beard to fundraise money for various charities. The Playoff Beard tradition is strongest within hockey but it has found its way into other sports through players like the NFL’s Jake Plummer and tennis pro Björn Borg. 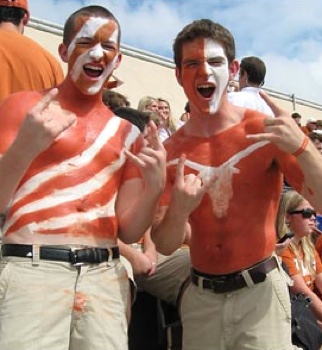 Fans love to show their support by wearing their team colors. Some may take it to the next level with brightly-colored facepaint or tattoos (whether temporary or not) but there are a select few superfans who are dressed so bizarrely that everyone takes notice. The NFL’s Washington Redskins have the Hogettes. When the group was formed, no one had even thought it would become an unofficial football mascot. As founder Michael Torbert describes it, he attended a Halloween Party at his grandmother’s retirement home dressed in her tea party finest and he was so popular that he and his friends thought they could take this act to local hospitals to cheer up sick children. As lifelong Redskins fans, they decided to go attend a game in their drag wear including pig snout masks referencing the offensive linesmen who were nicknamed the “Hogs.” The Hogettes have become a fixture within the Redskins community and through their fame, they have found greater exposure for their many charities. To date, the Hogettes have raised over $100 million for various charities like the Ronald McDonald House and the March of Dimes. 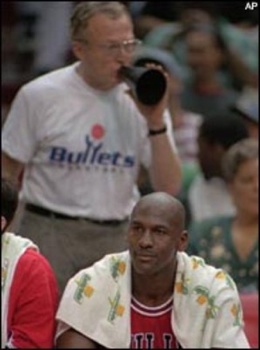 Heckling is one of the least favorable traditions in pro sports fandom but jeers and taunts are as common at games as the cheers and applause. No one has a heckling career as quite as prestigious as that of Robin Ficker (above), an ardent fan of the former Washington Bullets (now known as the NBA’s Washington Wizards). For twelve years, Robin Ficker held season tickets to Washington Bullets games that were directly behind the visiting team’s bench. He would taunt players through his megaphone. He made fun of coaches’ outfits. When the Chicago Bulls came to play, Ficker would read the sex passages of Bull’s Coach Phil Jackson’s 1975 autobiography “Maverick.” He’s had some supporters over the years, including basketball player Charles Barkley who had flown him to Phoenix when his team was in the finals against the Chicago Bulls. In 1997, the former Bullets moved to the MCI Center and Ficker decided not to renew his season tickets because the new seats were too far from the visitor’s bench. He faded from the sports world for focus on his political career but has recently taken to attending and heckling at wrestling matches at the University of Maryland. 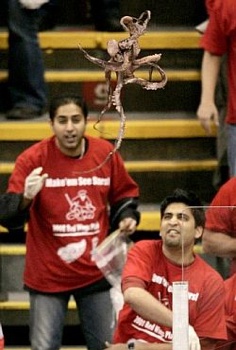 A practice that remains strong for the Detroit Redwings of the NHL that (hopefully) won’t catch on with the other teams is the tossing of octopuses onto the rink. The origins of this tentacled tradition began in 1952 when fewer NHL teams meant that the road to the Stanley Cup only took eight playoff wins. To mark this occasion, brothers Pete and Jerry Cusimano threw the eight-legged creature onto the ice to represent the Redwing’s eight games against the Toronto Maple Leafs and the Montreal Canadiens. Since then, hundreds of octopuses have rained down onto the Redwing rink, including one tossed by Bob Dubisky and Larry Shotwell that weighed 50 lbs (22.68 kg). With every octopus purchased for the purpose of tossing, the Superior Fish Market gives out an “Octoquette” which is a pamphlet of recommended guidelines for octopus tossing, including boiling the octopus for half an hour (raw octopus tends to stick to the ice and leave a slimy residue when removed), launching them only after a Redwing goal as any other time may result in a Delay of Game penalty, and toss the octopus in a direction away from any players, officials and personnel.