It is said that the basic two responses before danger are to run away, or to attack. However, this list proves that, when it comes to escaping death by predators, some mammals prefer to be a little bit more original. If you guys like this list, there may be a sequel on non-mammals! 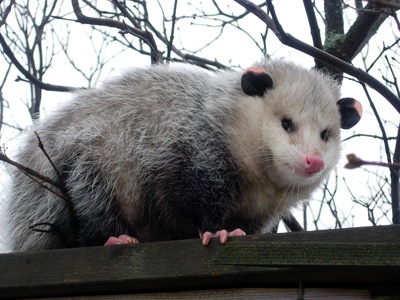 Everyone knows that “playing possum” means playing dead. The American opossum (Didelphis virginianus), found from Canada to Costa Rica, usually reacts to danger as many other mammals do; by hissing, growling and baring its teeth. It can also bite viciously if pushed too far. However, if this all fails and the situation becomes too dangerous, plan B is to feign death; the opossum collapses to the ground, drools as if it was very ill, and then remains motionless, with its mouth open and its teeth bared. It even produces a putrid, corpse-like smell from its anal glands – move over beaver ass juice.

Many predators prefer to kill their own prey and most will soon lose interest on an apparently dead animal, leaving the opossum alone. The most amazing thing about the opossum’s defensive method, is that it is not a conscious act; it is rather a physiological response to a highly stressful situation, and the animal does fall into a comatose state that can last for hours; usually, the opossum regains consciousness only after the enemy has left. Exactly how it’s body knows this, is still a mystery. 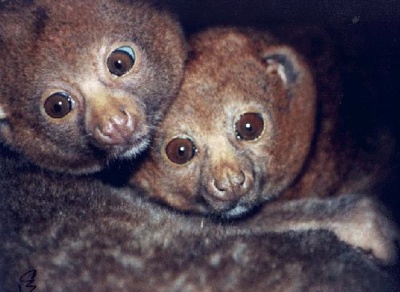 Found in the jungles of Africa, Pottos may look like some kind of small, arboreal bear relative, but they are actually primates. They are nocturnal and feed on tree sap, fruit and small animals. Due to their slow movements, pottos are vulnerable to a number of predators, and have a very unusual defensive method; they have enlarged neural spines on its vertebrae, which protrude from the neck and shoulders. These spines have pointy tips and seem to be used as some kind of unlikely weapon, with the primate “neck-butting” its enemies and perhaps, just making itself hard to swallow. The spines may also function as some kind of shield, protecting the potto’s neck from the killing bite delivered by some predators, often aimed at the neck or back of the head. 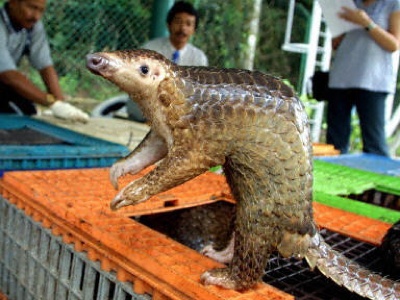 Pangolins are very weird mammals, whose bodies are almost completely covered on large scales, giving them an appearance somewhat reminiscent of a giant, living pine cone. They feed mostly on insects and are found in Africa and Asia. Although they have large, powerful claws on their forelimbs, they rarely use them as weapons; instead, when threatened, they coil into a ball so tight that’s almost impossible to unroll. The sharp edges of the scales make them practically invulnerable to most predators; they can also lash out with their powerful, heavy tail, causing serious injury with the sharp scales.

And that’s not all; a Sumatran pangolin was seen curling into a ball and then actually rolling down a slope at high speed to escape unwanted attention! The pangolin’s last defensive resource is to spray a foul smelling, gooey substance from its anus. Needless to say, this animal doesn’t have many enemies to worry about. 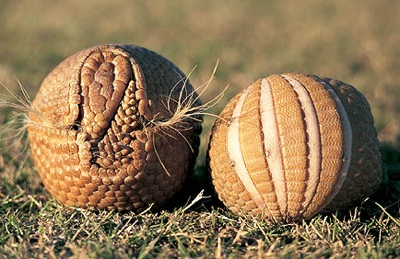 Although we tend to think of armadillos as heavily armored creatures, protected by an almost turtle-like shell, in most species the shell offers no real protection against large predators, and the armadillos will rather bury themselves into the ground to escape danger. The South American Three Banded Armadillo is the only one that can roll into a perfect ball; this is accomplished thanks to its loosely jointed armor which allows for a greater range of movement, and to its armored head and tail which interlock when the animal rolls into a ball, thus making it completely invulnerable to most enemies.

This animal has also been known to shut closed at the last moment, making a snapping sound to startle its enemies as a clever additional defensive trick. Since it’s so well protected, the Three Banded Armadillo doesn’t need to be a good digger and will use the burrows of other animals instead of digging its own. 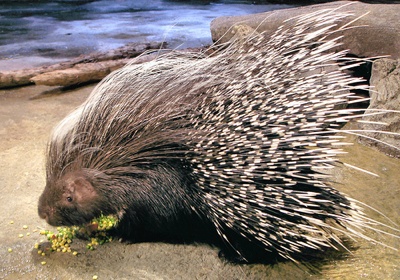 Found in Africa and southern Europe (mainly in Italy), the Crested Porcupine is among the largest rodents in the world, and also among the best protected mammals. Its quills, which have black and white banding so that predators can spot them from the distance, are actually modified hairs, covered with layers of hard keratin. These quills are longer in the front part of the body, forming an erectile crest that gives the animal its name. However, the most dangerous quills are the short ones in the back of the body. When threatened by a predator, the porcupine usually shakes its tail quills, which are hollow and sound like a rattle; if this doesn’t scare the enemy away, the porcupine charges backwards, trying to stab the predator with its back quills.

These quills break off easily and once they enter the predator’s body, tiny barbs in the tip actually pull them deeper into the wound; many unexperienced predators die as the result of porcupine quill injuries, either due to infection, or because the quills work so deep into the flesh that they damage blood vessels or even internal organs! There are porcupines in North America too, but these are usually smaller than their African relatives and spend much of their time in trees; interestingly, they have very powerful natural antibiotics in their blood. This is because they sometimes fall from the trees while foraging, and become stabbed by their own quills. If it wasn’t for the antibiotics, many porcupines would die of infection after a fall. 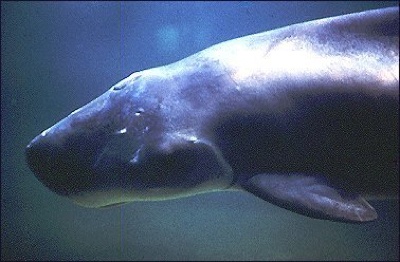 Unlike its better known relative, the gigantic Sperm Whale, which can grow up to 20 meters (65′ 6″) long, the rarely seen Pygmy Sperm Whale is only 1.2 meters (3′ 9″) long. This makes it vulnerable to predators such as large sharks and orcas. To protect itself, the Pygmy Sperm Whale employs a very unusual method; it expels a jet of reddish, syrup-like substance through the anus, and then uses its tail to stir it up, forming a large, dark cloud in the water. This momentarily conceals the whale from the predator’s sight and allows it to quickly swim to safety.

There is a closely related species of cetacean, the Dwarf Sperm Whale, which is known to use the same technique to escape predators; however, this is a very unusual defense for a mammal. In fact, the most similar defensive mechanism is found in cephalopods (squid and octopus) which are ironically the Pygmy Sperm Whale’s favorite meal! 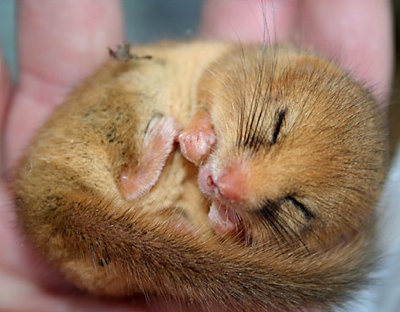 These small edible rodents are found in Europe, with some species scattered across Africa and Asia. They usually escape predators by fleeing, but they have an interesting defensive trick they use as a last resource. The skin in the dormouse’s tail is very loose, and if a predator grabs the rodent by the tail, the skin comes off allowing the dormouse to escape. This is a form of autotomy, that is, losing a body part as a defensive mechanism. Autotomy is common among reptiles (lizards losing their tails is the best known example), and invertebrates, but is very rare in mammals.

However, the dormouse can do this only once; after shedding the skin of its tail and escaping, the exposed tail bones usually fall off, or are gnawed off by the dormouse itself, since the skin does not grow back and the tail cannot be regenerated as in lizards. Some species of dormice have tufted tails which act as a decoy, driving the predator’s attention away from the dormouse’s head. 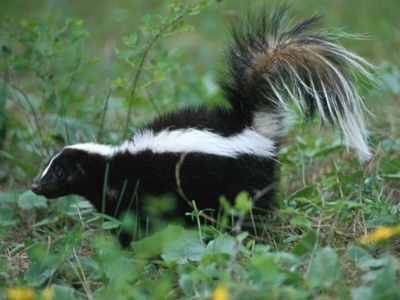 They also have incredible aim (most impressive if we consider that they attack with their rear end facing the enemy) and usually spray directly at the predator’s face; if an animal (humans included) is hit in the eyes by the skunk’s liquid, it can go blind, so it is always better to leave these animals alone. Due to this and to the fluid’s offensive smell, skunks have few enemies, the most important being the Great Horned Owl, which practically lacks a sense of smell and can attack silently from above, therefore avoiding the nasty spray.

However, as usual in this list, the skunk’s chemical attack is used only as a last resource, since its fluid supply is limited and it takes up to ten days for the glands to fully “recharge”. 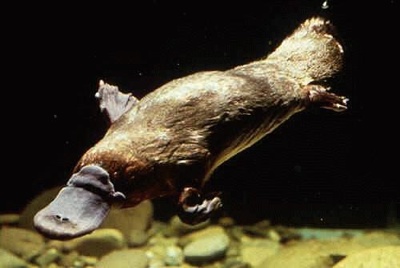 The bizarre platypus, once thought to be a hoax and now famous as one of the few mammals that lays eggs, is also unusual when it comes to defensive methods. The male platypus has a sharp, retractable spur in each hind limb, connected to a venom gland. When grabbed by a predator (or by a curious or ill-informed human), the platypus kicks with these spurs injecting the venom, which is usually enough for the enemy to let it go. Although the venom can kill animals up to dog-size, it is not lethal to humans. However, people who have been “stung” by these animals claim that it is among the most excruciatingly painful things that can be experienced, and the effects of the envenomation can last for days and temporarily impair the victim. Some claim that the pain is strong enough to cause the victim to faint.

Interestingly, only the male platypus has a functional venom spur; the female poses no threat to other animals (except for the small invertebrates that make up its food, of course). This suggests that the venom spur is primarily an intraspecific weapon, used by male platypus against each other during mating season duels. 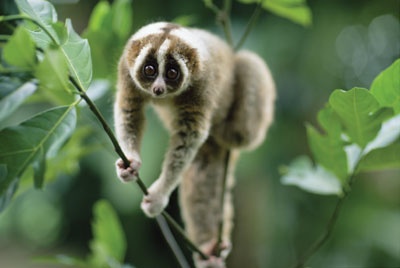 This small, nocturnal primate is found in the rainforests of South Eastern Asia. It measures around 35 cms (13″) long and feeds on whatever small animal it can capture (sometimes it feasts on tree sap as well). Being small and slow would make it vulnerable to many predators, if it wasn’t for its extremely unusual defensive mechanism. The Slow Loris has poison glands on its elbows (that’s right, we’re talking about a poisonous primate). But that’s not all. The Slow Loris makes itself an unappetizing entry by licking the poison and spreading it all over its fur. Female Lorises also lick their poison onto their babies before leaving them to hunt.

And the best part; since it licks and sucks the poison into its mouth, it ends up having a venomous bite as well, and if pushed too far, it bites the venom into its enemy causing intense pain and swelling. Some people have died as the result of anaphylactic shock after being bitten by Slow Lorises, even though the venom itself is usully not lethal to human-sized animals. Being a poisonous primate that gives itself a venomous bite is weird enough to grant the Slow Loris its #1 status in this list. But in case you missed it, the coolest thing about this guy is that it can actually lick its elbows!