The goal of Appropriate Technology (AT) is to increase the standard of living for the developing world without condescension, complication, or environmental damage. Typical AT inventions are more labor intensive, require fewer resources, and use low cost or readily available materials wherever possible. Special attention is paid to the social, cultural, and ethical aspects of the communities the technology is intended for. Submitted for your approval are 10 inventions using these principles, and they are every bit as ingenious as anything coming out of Silicon Valley. You will also find several links to charitable organizations distributing these products for little or no cost, should you wish to contribute to their efforts.

10
One Laptop Per Child 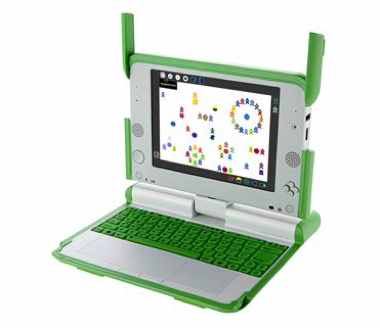 The developing world may be falling behind when competing for resources, but it hasn’t even started regarding technology. The “One Laptop One Child” project aims to fix this. Its goal is to create a rugged, low-cost, low-power, connected computer for children in the third world. Its XO laptop is about the size of a small textbook, with built-in wireless and a screen readable in direct sunlight (for children who school outdoors). The computer is extremely durable, energy efficient, and has a childlike industrial design to discourage gray market trafficking—whip this out at the boardroom and everybody will know who’s NOT getting to use it. XO laptops have already been delivered to children in Afghanistan and East Africa, with additional shipments scheduled for the Palestinian Occupied Territories. More information. 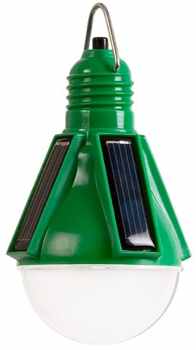 Though we can’t really fathom it, much of the world is still prisoner to darkness. Nokero’s N100 solar-powered light bulb may change that. This clever product stores electricity from daylight, one of the few commodities rural India, Africa and most of the third world has abundantly. Designed specifically for use in developing nations, the LED bulbs can provide four hours of light when the battery is fully charged. That may not sound like much to you or me, but consider the scarce wood burning fuel this replaces. The N100 is constructed from impact-resistant plastic and includes four solar panels, five LEDs and replaceable NiMH batteries said to last two years. Complete units cost $15 apiece, but may someday cost as little as $6 per unit in bulk. More information.

UK firm Concrete Canvas knows too well that “temporary” tent cities for refugees offer little protection from the elements, and a more sturdy solution is needed using local materials. Their solution is Concrete Canvas, an ingenious material for rapidly deployable hardened shelters that require only their product, water and air for construction. Just pump up the air bladder to provide temporary scaffolding, put the Concrete Canvas on top of the air bladder, and pour fresh or even salt water on the canvas. Let the canvas dry for 24 hours. Then remove the air bladder and you have a sturdy (25 or 54 sqm) shelter that can last up to 10 years. It’s even waterproof and fireproof. Two people with no training can assemble the smaller CCS25 version in 24 hours. More information. 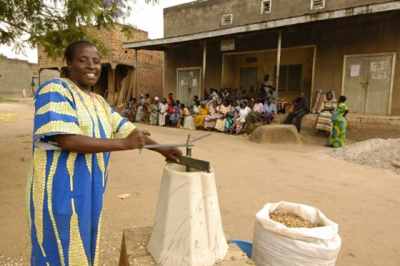 Prior to Jock Brandis’ Universal Nut Sheller, growing and harvesting peanuts in Africa was a time-and-labor intensive affair relegated to women and children. However, his simple hand-powered device – capable of shelling 50 kilograms (110 lb) of raw, sun-dried peanuts per hour – is now making African nut farming plausible. The device requires less than $50 in common materials to make, lasts 25 years, and just one sheller can serve the needs of a 2,000 person village. Thus it was no surprise when it won the 2006 Popular Mechanics Breakthrough award. The Full Belly Project in North Carolina, USA, is working to establish businesses that manufacture and distribute the Universal Nut Sheller, since the machine can quadruple farmer incomes and encourage nut farming, which prevents erosion and returns nitrogen to the soil. Field feedback indicates that the machine works well with shea nuts in Uganda, but Ghana residents report that the Universal Nut Sheller broke the peanuts into unacceptable sizes. More information. 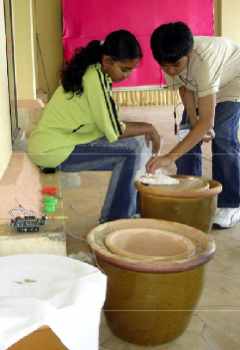 In 2001, Nigerian Mohammed Bah Abba won the 2001 Rolex Awards for Enterprise with his invention of a simple cooling system to preserve food in rural areas with no electricity. His solution was a Pot-in-Pot refrigerator, which relies on the concept of evaporative cooling. The system works by putting a smaller clay pot inside a larger one, separating the two by constantly moist sand. Evaporation causes a cooling effect in the inner pot. Eggplants are reported to stay fresh for 27 days, nine times their usual expiration date. Tomatoes and peppers can last for up to 21 days (I can’t even get that to happen in my own refrigerator!) More information.

UK Engineering student John Leary knows his “Gilligan’s Island”, and the world may be better off for it. When challenged to design a product from only waste materials, he created a bicycle-powered water pump for irrigation and water distribution in Guatemala. NGO Maya Pedal learned of the product and assisted in distribution, since its goal is to improve the daily lives of locals without finicky (and expensive) fossil fuel machines. The product works by plugging a normal bike’s rear wheel to a friction drive, connected to an electrical pump. The back tire contacts with the former armature of the motor, and the wheels are moved by raw muscle power. The machine can pump 40 liters of well water per minute, and locals love the design because it’s so portable (when you’re done pumping, just flip the frame upside down and the pump sits atop the back wheel, so you can ride off to the next well). The machine is now in regular production in Guatemala. More information. 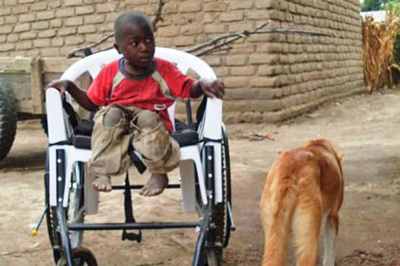 Okay, the wheelchair did previously exist, but not one this cheap, and 20 million people in the world need one. NOW. After seeing a disabled Moroccan woman drag herself across a busy street, MIT grad Don Schoendorfer and his wife Laurie decided to do something about it. They reasoned that the key issue was wheelchair affordability, so they developed one with the lowest possible cost. The resulting FWM wheelchair uses elements already in existence, components currently in manufacture and off-the-shelf parts already being produced in very high volumes. By using this approach, FWM has an extraordinarily low $59.20 manufacturing cost. The FWM wheelchair is manufactured in China for maximum economy, packed in bulk in 40’ ocean-going containers, and shipped directly to the receiving country for highest efficiency. As of this writing, FWM has delivered 481,655 wheelchairs to 77 countries, all at no cost to the recipients. More information. 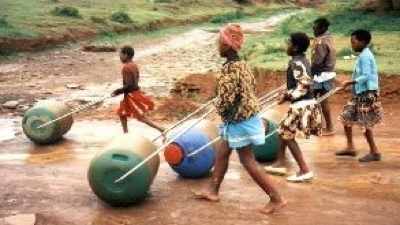 In some African villages, fetching potable water can take most of an entire day, and is typically a chore left to women and children. The Hippo Roller is a simple tool for transporting water from distant watering-holes back to homes and villages – an alternative to the traditional 5-gallon-barrels-on-heads approach. The product itself is similar to a barrel with a handle that you push ahead of you like a steamroller’s drum, and has a capacity of 90 liters / 24 gallons. That’s nearly a 5X increase in productivity. In the past 15 years, the Hippo Roller Water Project has distributed over 30,000 rollers, directly benefitting over 200,000 people. More information. 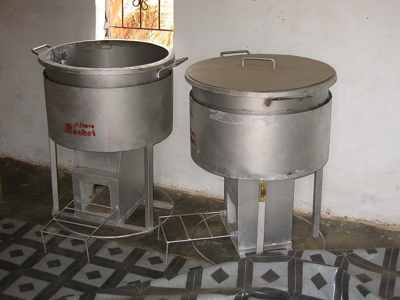 A rocket stove is a super-efficient heater invented at the Aprovecho Research Center to reduce biomass fuel requirements in developing countries. It combines the stove’s air-intake with the fuel-feed slot in an opening terminated by a combustion chamber, which in turn leads to a chimney and heat exchanger. Rocket Stoves are commonly used today in Lesotho, Malawi, Uganda, Mozambique, Tanzania, and Zambia. The stoves are easy to build using local materials, and accept small diameter fuel such as twigs and branches. The resultant heat is directed to a very small area, and greatly reduces the amount of wood fuel needed for cooking and boiling water. Aprovecho won the 2009 Ashden International Energy Champion Award for its Rocket Stove technology. More information. 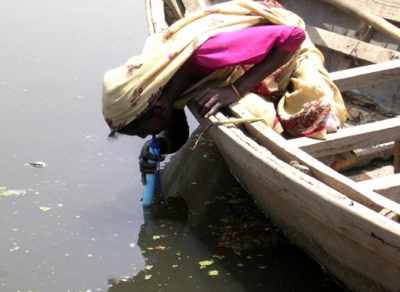 In 2009, an estimated 5,000 deaths from unsafe drinking water occurred every day. This is down from 6,000 in 2007, and Vestergaard Frandsen’s Lifestraw played its’ part in the decline. The Lifestraw is a personal, low-cost water purification tool, with a service lifetime of 700 liters, or about one year of water consumption for a single person. Unlike other water purification products, Lifestraw is intuitive to use, can be worn around the neck, and requires no training, special tools or electricity to operate. The sucking action of the straw pulls the water through a filter that traps 99.999% of waterborne bacteria (such as Salmonella, Shigella, Enterococcus and Staphylococcus) and 98.7% of waterborne viruses. The Lifestraw has won countless awards, including Time Magazine’s “Best Invention of 2005”, “Europe’s Best Innovation” by Reader’s Digest, and “Innovation of the Year” by Esquire. More information. 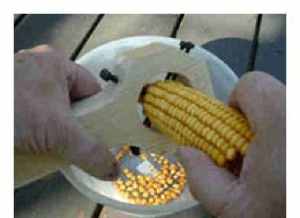 Designing products for developing nations is a unique challenge because inventors are creating technologies for cultures of which they have little, or no, experience. Ignorance of daily life and values in developing countries can pose difficulty envisioning how people might use an invention, or whether said invention fills a need at all. Case in point: Compatible Technology International visited Guatemala and observed women hand-shelling corn. They saw how labor-intensive the manual shelling process was, and, being engineers with a problem in their sights, they quickly developed a corn sheller out of a piece of wood with a hole in the middle. The women pushed the ear of corn through the hole, shaving the kernels from the cob MUCH more quickly. So the engineers crafted and donated several of their devices, convinced of their good deed. But when they returned months later, they found the women still hand-shelling corn. The women told them, ‘Thanks for your invention, it’s much easier. But this is the time we use to talk about men, school, and kids, and your device makes our work too fast for that.’ (Take heart guys, Edison had a similar experience selling a vote counter to the US Congress – of course they were talking about bribes and war, not ‘men, school and kids’.) More information.

10 Bizarre Things You Can Get From A Vending Machine