Another 10 Artistic Uses of Ordinary Things

Artists see the world differently than other people. It is this special view of the world that makes them outstanding in their various fields. This list shows another ten artists who used their special perspectives to create unique works of art from otherwise mundane objects. If you have other suggestions for other artists that I should add to this list, feel free to add them in the comments. 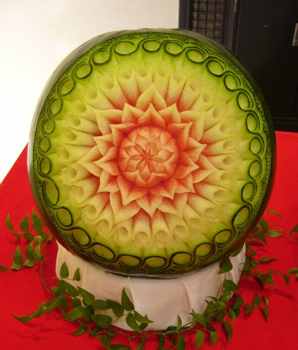 Takashi Itoh is a Japanese food sculptor who specializes in carving amazing designs on watermelons. The idea came to him after he saw a watermelon sculpture at a Thai culture festival. Duly inspired, he started teaching himself how to carve the fruit, and three weeks later, he mastered the craft. His carvings, which can take up to ninety minutes to complete, include dragons, slogans, cranes, tortoises and a series of athletic designs inspired by the 2008 Beijing Olympics. He even made a self-portrait of himself on the fruit. For more of Itoh’s delicious art, go to his website. 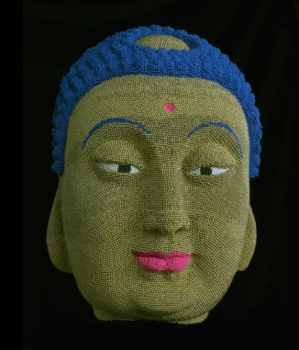 Scottish artist David Mach is a highly innovative artist who has created many extraordinary artworks from ordinary materials, such as postcards, bricks and coat hangers. His recent works include a series of 3D portraits of famous icons like Marilyn Monroe and Elvis Presley, made from thousands of colored matchsticks. The sculptures were made by painstakingly gluing matches, with the tip facing outward to a fiberglass mold. Thus, the sculptures can take 500 hours to complete, although occasionally after finishing a sculpture, Mach torches his work and lets it burst into flames, as a fitting finale to his flammable art. For more of his fascinating works, go to his site. 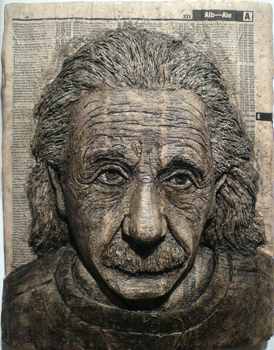 Alex Queral, from Philadelphia, is a sculptor with a difference. He creates portraits of famous people from discarded phonebooks. He does this by first making a freehand sketch of the person he will carve. Using the sketch as a template, he then places it over the phonebook and starts carving the face into the pages using an artist’s scalpel or razor blades. ‘It can be quite tense work sometimes because it takes a long time to finish and when you cut something away you can’t get it back again. Nearing the end of the carving and then suddenly having it ruined by a careless cut can be pretty crushing. You have to start all over again,’ said Queral. He now makes up to two new carvings each month and has produced carvings of Barack Obama, Jack Nicholson and the Dalai Lama on the discarded books. For more photos, go here. 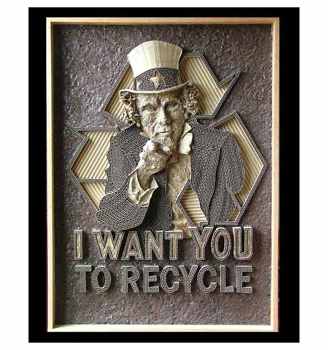 Mark Langan, a self-taught artist, has perfected the art of using corrugated cardboard to create intricate sculptural pictures. Each of Langan’s pieces was visualized using no computer rendering; a simple sketch is used. Each artwork entails cutting, layering and sealing the individual pieces using nontoxic glue. Not only is the finished work beautiful, but it is totally environmentally-friendly. To see more of his artwork, go to his site. 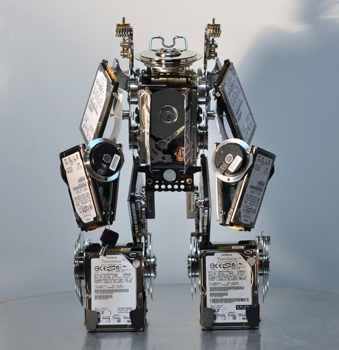 Miguel Rivers, a systems administrator, creates beautifully complex metal sculptures from used computer hard drives. Rivera’s first project was a car out of 33 standard 3.5-inch hard drives, which took an entire weekend to make. Now, he has created other cars, motorcycles and robot-like figures out of the metallic medium. For more photos, go here. 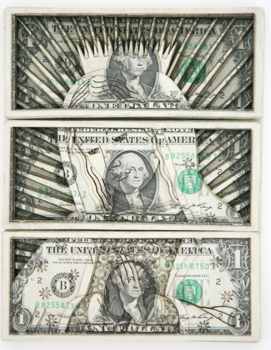 At the O.H.W.O.W. gallery in Miami, Florida, Scott Campbell, a Louisiana tattoo artist, showed his works, with the highlight of the exhibit being a series of laser-cut carvings made on several stacks of dollar bills. The unique collection contains designs that showcase Campbell’s distinct tattooing style, including a thorned rose, the Virgin Mary, and a handgun. For more pictures as well as a sampling of Campbell’s tattoo art, visit his website. 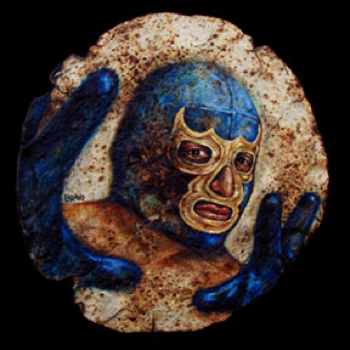 Los Angeles artist Joe Bravo is a painter. Nothing unusual about that, except that his choice of canvas is not paper, but flour tortillas. He first dries the tortillas naturally or by using an oven, then varnishes both sides so that it could be painted on with acrylic. After finishing a work, he protects the image from moisture by coating it with more varnish. His paintings are often inspired by the texture and burn marks present on the tortillas themselves. Bravo has created tasty images of famous icons such as Marilyn Monroe, Che Guevara, Ronald McDonald and La Virgin de Guadalupe. He has earned such a reputation from his tortilla art that he has sold some of his works for more than $3,000. For more of his yummy art, visit his site. 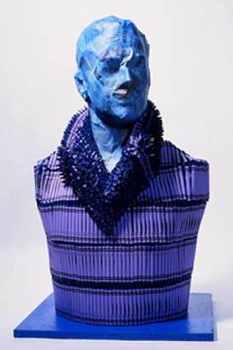 Herb Williams, from Tennesee, creates whimsical sculptures and installations out of that kindergarten classroom staple, crayons. He uses up to 250,000 crayons for his artworks. Because of this, his studio is filled from top to bottom with boxes of 3,000 single-color crayons, and he is one of the only individuals in the world with an account with Crayola, where he gets most of his materials. For more of his colorful art, go here. 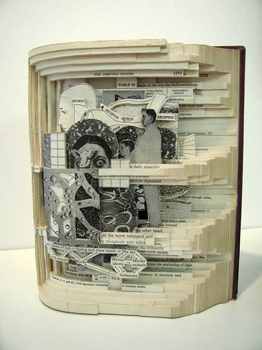 Brian Dettmer, from Atlanta, Georgia, resurrects old reference books into beautifully intricate masterpieces. In a process that he calls a ‘book autopsy’, Dettmer seals the edges of the books he uses before performing ‘surgery’ on their pages. Using surgical tools like scalpels and tweezers, he dissects sections of the book’s text, leaving interesting text and illustrations intact. Nothing is added or altered, only removed, so everything that’s left is in its’ original place in the book. Titles that were ‘operated’ on by Dettmer includes ‘Household Physician’ and ‘Webster’s New International Dictionary’. For more photos, go here.

Lichtfaktor is the name of a group of graffiti artists based in Cologne, Germany. Only these graffiti artists don’t work with spray paints: they use flashlights, neon tubes, glowsticks, LEDs and other mobile sources of light to create dazzling shapes and brilliant swirls, that illuminate dreary cities with their momentary glow. Then, using a special camera with a long exposure, the group captures these light ‘sketches’ to preserve them for future appreciation. The group, comprising of graffiti artists Tim Feshke and David Lupschen, and video engineer Marcel Panne, also make videos of their art, using stop-motion animation to make their light graffiti come alive. In one particular video, entitled ‘Star Wars vs. Star Trek’, Tim and David made trash cans come alive, staged a fantastic light saber fight, and ‘teleported’ themselves through the gloomy streets of Germany. For more of their bright art, go here.