People from the 19th and early 20th centuries were fascinating, to say the least. Inspired by the Industrial Revolution and groundbreaking scientific discoveries, the average householder developed an interest in inventions, “improving” their lives by using cutting-edge (untested) science and technology in every aspect of their social and domestic lives.

Unfortunately, their enthusiasm often ran away with them, and their disregard for health and safety often led to disaster. Here, we look at some of the ways the average person from the Victorian era through the early 20th century may have killed himself while enjoying the benefits of scientific and technological progress.

10 Going To The Bathroom 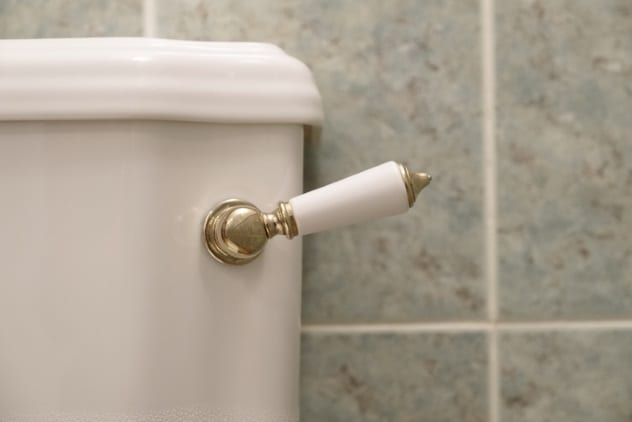 Visiting the bathroom shouldn’t be a dangerous undertaking. However, the Victorians had a number of perils to contend with. First was the water heater, which was gas-powered and often exploded, possibly because of the candles and oil lamps which were often used by residents who were caught short in the night.[1]

And then there were the toilets themselves. Prior to the Great Stink of 1858, when London was practically uninhabitable due to the hot weather and sewage smells, toilets with the s-bend design that we know today were rare. Toilets dropped their contents straight into the sewers below, and the smells from sewer rose through the unimpeded pipes and, shall we say, lingered.

And the sewers didn’t only contain eliminations but other sorts of human waste, too. The cemeteries of the period were not well-regulated, and human remains frequently contaminated drinking water or flowed directly into the sewers. And decomposing matter produces methane and carbon dioxide. Methane, particularly when combined with a flame from a candle or water heater, causes explosions.

Straight up through the toilet.

In order to control the methane problem, a number of sewer gas lamps were installed. In a surprisingly green fashion, engineers attempted to power the city’s streetlights using methane gas in order to reduce the dangerous buildups. The lamps were only partially successful, but the widespread introduction of s-bend toilets after the Great Stink made using the facilities a little safer. 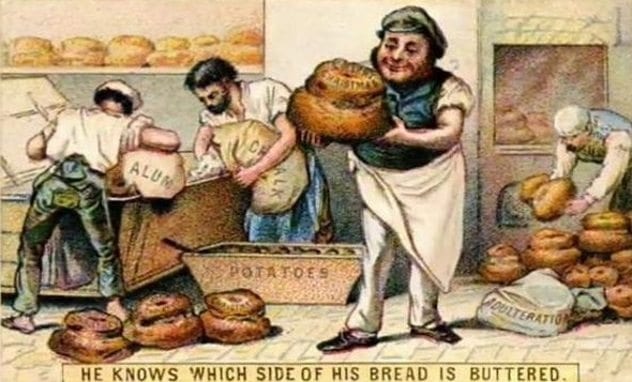 A lot of foodstuffs in Victorian England were made with contaminated ingredients. One report in 1877 showed that ten percent of butter, eight percent of bread, and 50 percent of gin had copper added to it, while red lead was added to cheese to give it a “healthy” color. Other adulterants included strychnine in beer, copper in pickles and jams, lead in mustard, iron in tea, and mercury in chocolate.[2]

Bread, however, was a particular problem. Very few poor people at that time had the facilities to bake their own bread and therefore bought their daily loaves from street vendors. Bread was cheap, so it was a staple food for many, and almost the only food for some. However, the majority of this bread was adulterated with alum. Though it was not poisonous in itself, alum acted to prevent the absorption of nutrients in food.

The alum bulked out the bread, making loaves appear larger for their weight and thus more attractive to poor families with many mouths to feed. Those who survived the sandwich fillings would have developed rickets or other diseases because of their inability to absorb nutrients efficiently.

8 Walking Down The Stairs 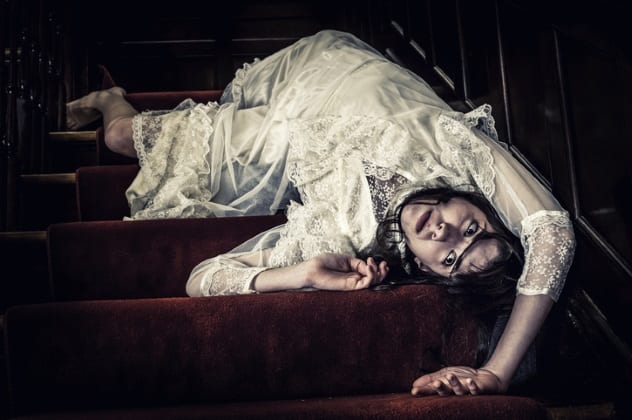 Though anyone can fall downstairs, the Victorians were more vulnerable than most to severe injury and even death.

There were very few building regulations at that time and none at all when it came to the construction of modest homes. Stairs were very narrow, often with several steep turns, which made navigation tricky. Also, the builders did not have a standard measurement when constructing their staircases, so steps within a single staircase were often of different height and width.

Not only that, but no one thought it necessary to install a handrail. Some staircases were nothing more than glorified ladders, up which women were expected to climb while wearing long dresses, often while toting a child or two on their hip.

Unsurprisingly, deaths from falling down stairs were common.[3] 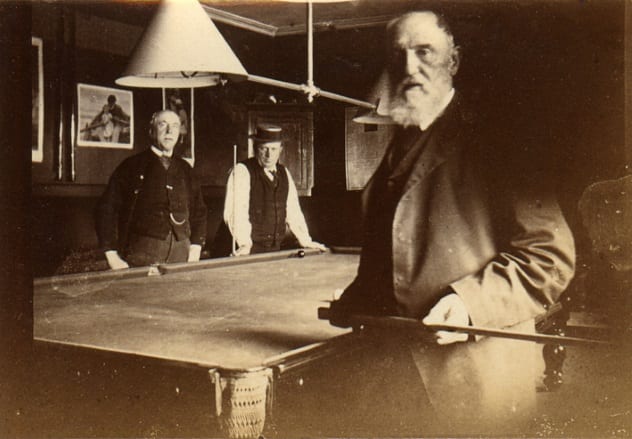 Snooker and billiards were once considered games for gentlemen only. The balls were made from ivory and were therefore very expensive. However, when celluloid was developed as an ivory replacement, the possibility of billiards for the masses seemed a very real one.

There was a big disadvantage of using celluloid over ivory, though: It was volatile and flammable—very flammable, in fact. That was unfortunate, because one billiard ball striking against another was sometimes enough to cause an explosion. Players complained that the noise sounded like a gun going off.[4]

Which is enough to put you off your shot. 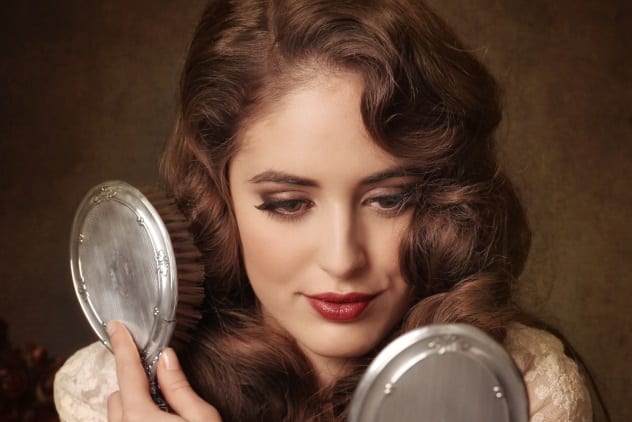 Usually, when you tell a woman that they have a certain glow about them, it is a compliment. For the Radium Girls, however, it was more a sign of impending death.

During the early 20th century, radium was considered to be something of a miracle element. Cosmetics manufacturers claimed (without any evidence) that small amounts of radium were beneficial to health. Customers were sold face creams and soaps laced with radium that were guaranteed to make their skin glow. Other manufacturers added radium to energy tablets, butter, and even chocolate.

Radium was also added to paint, which was used to decorate clock faces with luminous dials. And during the 1910s and 1920s, women who painted them were told to lick their brushes after dipping them in the radium-laced paint in order to point the end of the brush.[5]

The radium was extremely dangerous, and those who were in regular contact with it often died painful deaths. The clock painters, known as the Radium Girls, suffered terribly. When the body of one was exhumed five years after her death, it was still said to be “glowing.”

5 Cleaning Out The Gutters 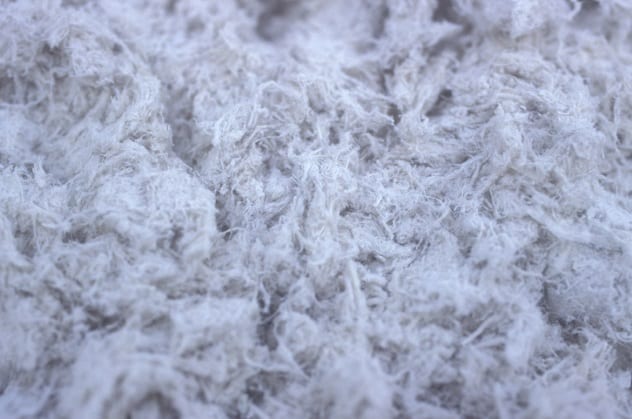 The Victorians loved their scientific discoveries and inventions, but they weren’t always careful about testing them before they went into full-scale production.

So when they discovered asbestos, a cheap, nonflammable material, they used it for everything. Its use in guttering was common, but it was also found all over the Victorian and Edwardian home in insulation, floor tiles, and heaters. It was also used in some more unlikely and disturbing products, such as children’s toys. The attractiveness of a nonflammable material in such products is obvious.

Unfortunately, though asbestos is wonderfully flame-retardant, it causes severe respiratory diseases and cancer.[6]

4 Waking Up To A Nice Cup Of Tea 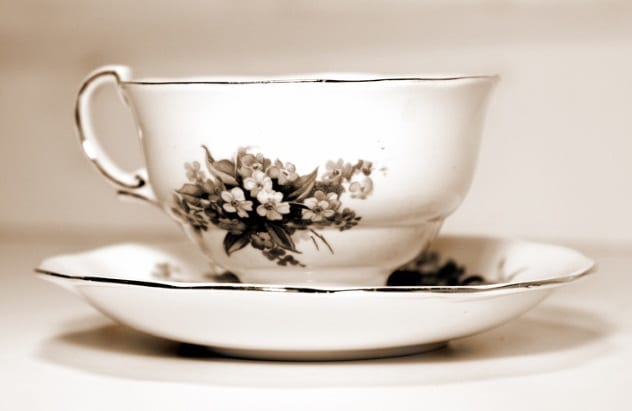 Ever inventive, the Victorians and Edwardians were always looking for ways to save labor for even the simplest things. Some of their inventions were brilliant, but others fell into the wacky and useless category. And some of them were just plain dangerous.

They tried to develop bottles that babies could feed themselves with, to save parents the trouble of having to pick them up, and made a pump-action vacuum cleaner that such needed vigorous bellow-pumping that it would have given Charles Atlas a tough workout. But right at the top of the list of the inventive, ridiculous, and dangerous was Albert E. Richardson’s patented Automatic Tea Making Machine. He combined an alarm clock with a kettle set over a spirit burner.

The burner used methylated spirits, which were lit by the automatic striking of a match when the alarm went off. Another alarm rang when the kettle was boiled, and a spring mechanism tipped the water into the waiting cup. However, if the match failed to ignite, or if it ignited at the wrong time, the teasmade was potentially lethal.[7] 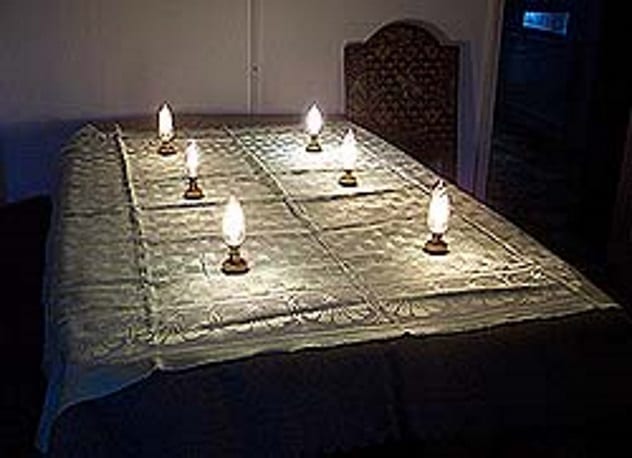 The ingenuity, or stupidity, of Mr. Henry Cooper knew no bounds when, in 1902, he invented the self-illuminating table cloth. Why go to the trouble of putting a cloth over a table and then placing a lamp on top of it, he reasoned, when you can accomplish both at once with his patented electric tablecloth?

The cloth consisted of two layers of felt with an electrical circuit sandwiched in between them and six electric light bulb sockets poking out through the cloth. When plugged in, the cloth would give a lovely, intimate feel to his dinner party, without all the extra (two seconds) effort of using separate lamps.

Lovely. Unless, of course, a guest spilled their wine, in which case the whole thing would have gone up like a box of firecrackers. Back to the drawing board, I think, Mr Cooper.[8] 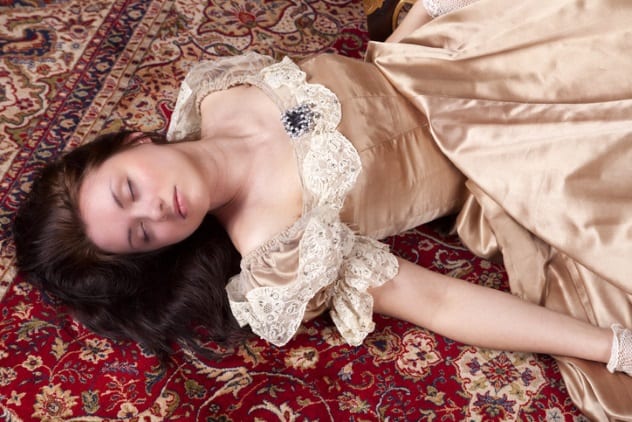 Keeping food fresh has always been a big domestic problem. Various nonmechanical methods had been developed, such as meat safes, but for the inventive Victorians, that wasn’t good enough. They wanted to produce a mechanical or electrical refrigerator that would keep food cool.

In 1834, American inventor Jacob Perkins unveiled the first-ever refrigeration unit. The fridge was billed as a vapor compression refrigeration unit and as an “apparatus and means for producing ice, and in cooling fluids.”[9] However, the fridge was not particularly reliable and very expensive and never caught on.

By the 1890s, however, the cooling process had been “improved” by the addition of methyl chloride gas. This cooled the fridge but was, unfortunately, extremely toxic. Manufacturing ceased when a fridge leaked while still in the factory, causing several deaths.

Though the Victorians were innovative and farseeing in developing fridge technology, less than two percent of the population of Britain owned a fridge before the outbreak of World War II. Later, safer, innovations, of course, demonstrated just how right the Victorians were about the usefulness of a fridge.

1 Doing A Bit Of Light Ironing 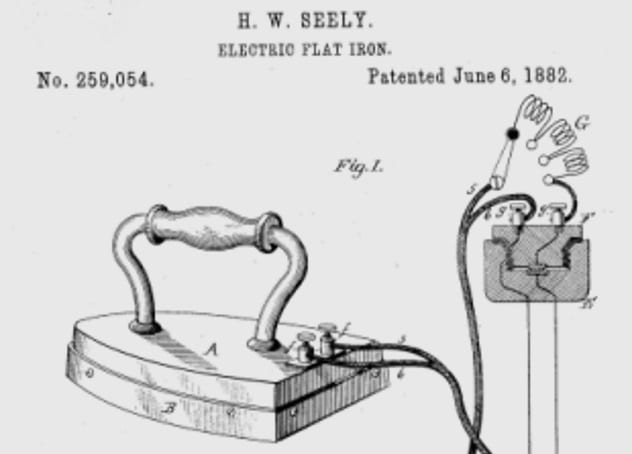 Being a laundry maid in the Victorian era was a tough job. Irons were made of (surprise, surprise) iron, which was heavy, and a set of irons were needed in different shapes and sizes to tackle different jobs. They were placed in a fire to heat and then cooled to the correct temperature. Steam was created by covering the garment with a damp cloth before ironing. It was hot, sweaty work.

So it was only to be expected that someone would try to make an electric iron to make the job easier. In 1882, Henry W. Seely of New York was the first person to patent a workable electric iron. The iron was wired, permanently, into a circuit.[10] However, it was not possible to regulate the temperature of the iron, which made it difficult to iron clothes without burning them. And it was a fire risk, which rather defeats the point.

Nevertheless, like many of these inventions, these early electric irons were the forerunners of something really useful and exciting (electric tablecloths excepted), which shows that perseverance can be the mother of success. Or dangerous table dressings.

Read about more wild, dangerous activities from the past on 10 Dreadful Ways The Victorians Accidentally Poisoned Themselves and 10 Ridiculous Things The Victorians Did In The Name Of Science.