Have you ever looked at a painting, drawing, or sculpture and wondered about the creator? Whose mind was it that birthed any creative genius? Sometimes, what you find is deeply unsettling but not altogether surprising.

Prisons today formulate ways to encourage inmates to adopt art as a form of redemption, but it’s clear that art and criminality often have met historically. It seems that the stereotype of the miserable, deranged artist rings true, particularly in the cases on this list. Perhaps genius and misery go hand in hand. 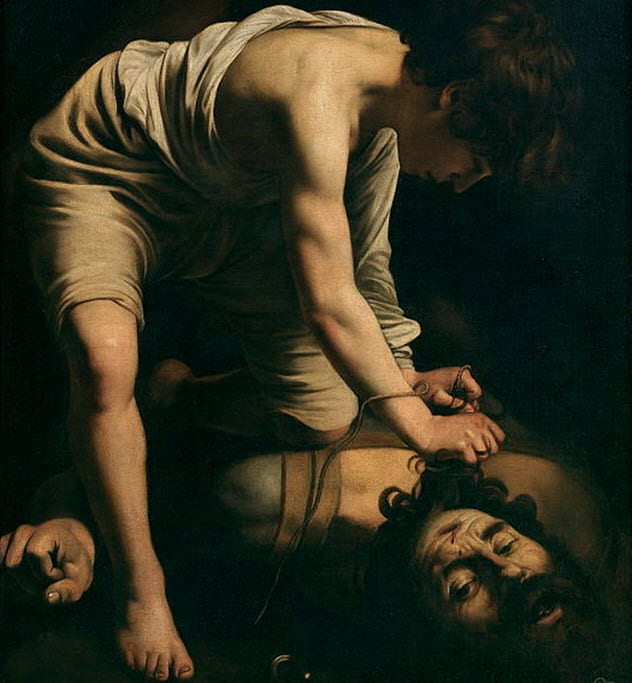 This striking painting is the renowned David and Goliath by Caravaggio, an Italian Baroque master of the 16th century. Caravaggio is no small name. His artwork influenced many an artist throughout time, including Rembrandt. Almost everyone views him as a perfect artistic genius, right?

Not so much. As his fame grew, so did his rap sheet. In the space of six years, he was charged 14 times, usually over minor altercations such as hitting waiters on the mustache with plates full of artichokes. (He was essentially that annoying guy at the bar.) However, it all got a bit serious for the artist when he was discovered to be illegally carrying a sword, which raised police suspicions over the temper of the respected genius.[1]

In 1606, Caravaggio’s criminal life reached its peak with a fatal tennis court battle. That’s right—tennis. Court evidence suggests that he killed a man named Ranuccio Tomassoni while filled with red-hot rage over either a woman or a gambling debt.

After he was taken to prison and put on trial, Caravaggio fled to Malta. He was perhaps even more romanticized by the Italian public and began to create art, such as David and Goliath, that reflected his darker, sinful side.

Soon after, it was revealed that the Pope had decreed a death sentence for him. But the artist died soon after in 1610, presumably of lead poisoning from his paints. It was a fitting end for the most talented but rancorous artist of his time. 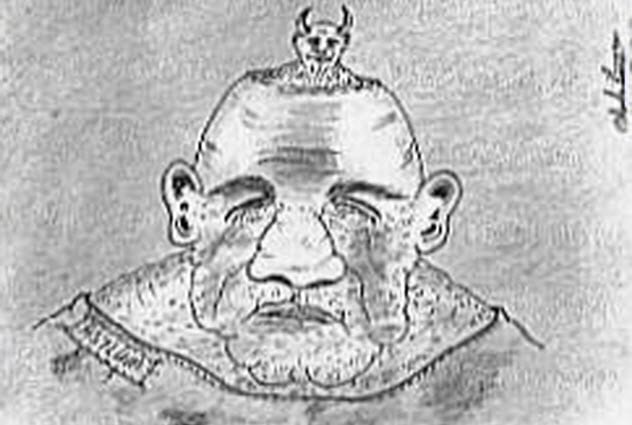 This intriguing and deeply metaphorical drawing highlights the nature of imprisonment: being trapped both physically and mentally. Who would have guessed that this subtly skillful and profoundly meaningful drawing was thought up and emerged at the hands of Charles Bronson?

Often dubbed the “most violent prisoner in Britain,” he was first convicted of armed robbery in 1974 and sentenced to seven years. Not that bad, all things considered. It was his run-ins with guards and other inmates, holding hostages, and undertaking violent attacks that saw his sentence extended to life.

It is in this environment, however, that he thrived. He cultivated his art that depicted life in prison and psychiatric hospitals and won multiple awards. He even wrote a book called Solitary Fitness that gives advice on exercising in small spaces—perhaps a must-have for those moments of boredom in the office?

As he grew increasingly interested in art, he changed his name to Charles Salvador in honor of Salvador Dali, his favorite artist. Although Bronson was still imprisoned, the Charles Salvador Art Foundation was set up to promote his artwork and “help those in positions even less fortunate than his own” to engage in art and find themselves through painting.[2]

8 Illustrations In A Friend For Little Bear
Harry Horse 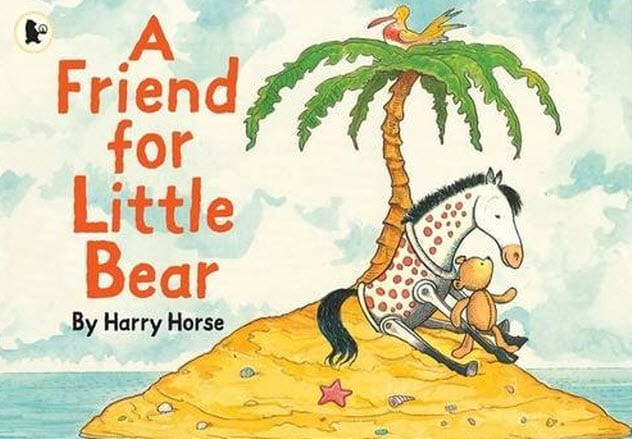 Harry Horse, a prominent children’s book illustrator and writer, changed a lot of little lives through his stories of little bears, horses, and the Loch Ness monster. His works were a staple in kids’ lives in the 1980s and ’90s.

However, behind these adorable tales and drawings lies a sinister truth about a deranged and cruel man. In 2007, when he and his terminally ill wife were found dead in each other’s arms, the world believed that they had taken their own lives with painkillers in a romantic suicide pact. However, with the causes of death kept hidden, what was later revealed shook the world.

In a drug-fueled rampage, Horse stalked around his house, declaring “it’s a wonderful night for killing.” Then he tried to end his wife’s suffering. In the end, he did so by flying into a frenzy and stabbing her so ferociously that the knife broke. He was forced to continue with a second knife.[3]

Then he slaughtered the couples’ cat and dog, proceeded to stab himself 47 times, and bled out in their house of death. 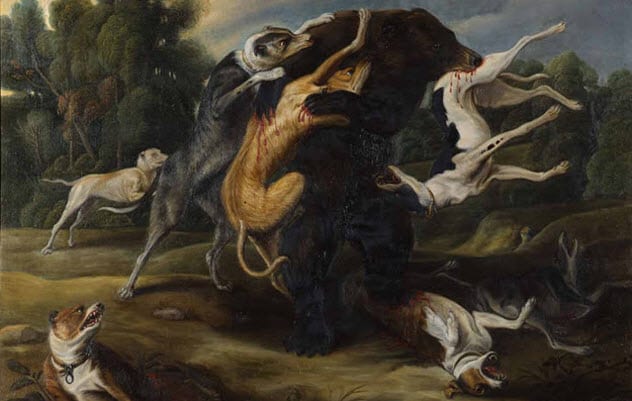 It wouldn’t surprise a lot of people to learn that this slightly disturbing depiction of a bear being attacked by hounds was painted by none other than the fascist dictator Francisco Franco. Other than ruling Spain with the harshness of, well, a bear and causing civil war, Franco painted.

His grandson, also named Francisco Franco, said that the dictator loved to spend time in his study, painting for hours to relax from the stresses of being a tyrant. Tough life, we guess.

Despite all this, the man was unequivocally evil. His encouragement of the Spanish civil war resulted in up to 500,000 deaths. Although many sources suggest that he protected Jews from Nazi Germany, he compiled a list of 6,000 Jews in Spain and gave it to the Nazis. He also repressed language and media and exerted absolute control on some regions of the country.[4]

Due to this behavior, many scholars believe that his depiction of a bear and hounds represents him as the bear tearing apart his political opponents, the hounds. 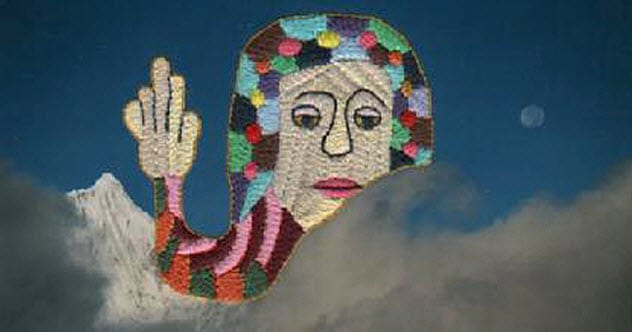 This vibrant and captivating piece of textile art seems to be harmless—before you delve into the truth about its creator. Wayne Lo was an 18-year-old who had a scholarship at the liberal arts school Simon’s Rock College of Bard in Massachusetts. However, his high hopes took dark turns.

His conservative views did not mix well with the boarding community of his new school. He was deemed racist, homophobic, and anti-Semitic by other students.

In 1992, a spurned Lo perpetrated a shooting at his school, killing a professor and a student and wounding countless others. His trial resulted in two life sentences without the chance of parole.

During his imprisonment, he continues to create textile art. One can purchase Wayne’s (aka Skid Lo) art on his website. All proceeds are donated to the fund for the student, Galen Gibson, whom Lo murdered.[5] 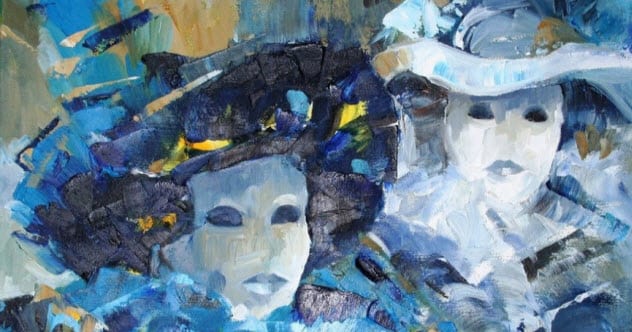 This beautiful, sad, and elegant painting depicts a life of sophistication and glamour and would surely seem to have been painted by an artist of that sort.

Not quite. Painted by Reggie Kray of the Kray twins, the notorious East End gangsters of the 1950s and ’60s, this piece is one of many that the pair painted once they found themselves in jail for life in 1969. The pair controlled a gang known as “The Firm” in London after being rejected for promising boxing careers due to their entanglement in crime.

The twins were considered celebrities as popular nightclub owners who socialized with lords and MPs. But hiding beneath this perfect facade were two men guilty of arson as well as countless murders and armed robberies.

Both brothers turned to art while serving life sentences. Ronnie suffered with paranoid schizophrenia and often depicted scenes of open fields and houses, showing their yearning for freedom.[6] 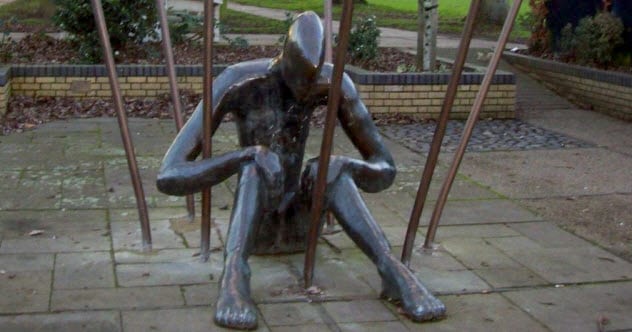 This statue can be found in Hull and was created by none other than Scottish gangster Jimmy Boyle. It seems like gangsters have a flair for the creative. Who would’ve guessed?[7]

In 1967, he was imprisoned with a life sentence for the murder of William Rooney but was released only 14 years later. During his time in Barlinnie Prison, he found himself creating art due to his participation in a special arts program. When he was released, he moved to Edinburgh to pursue his artistic career.

Since then, he has flourished as a novelist, fine wine lover, and artist. He is renowned across the globe for his art. 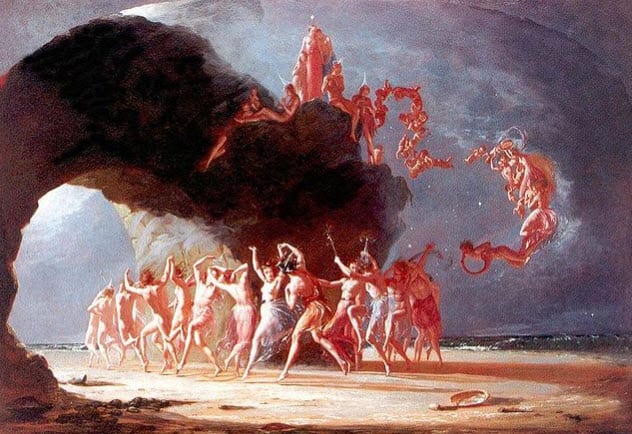 This impish, fantastical painting is an insight into the fairy-tale art of Richard Dadd. He carefully positioned himself in the art market of the 1800s as an interesting, almost Lord Byron–type figure, with his wildness escaping into his art.

He spent a great deal of his time traveling with Sir Thomas Phillips. But a trip to Rome, surrounded by Christian iconography, proved to be his downfall into paranoid schizophrenia.

Some years later, his father, Robert, reached out to a “mad doctor” (a psychiatrist), who suggested that Richard be hospitalized immediately. Richard proceeded to invite his father on a trip and then murdered him.

Richard’s own comment about the murder was that it was a sudden compulsion to make a sacrifice to the gods, suggesting that he swiftly killed his father and offered a prayer to Osiris. However, evidence suggests that he struck his father from behind, tried to cut his throat with a razor, and then stabbed him with a folding knife.[8]

Following this, Richard was imprisoned in Bedlam, where he produced some eerily beautiful art. 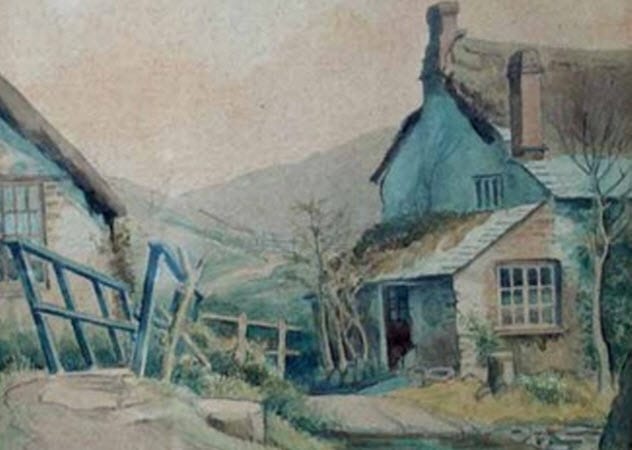 Olive Wharry was born into a well-off family in 1886 and studied at the School of Art in Exeter. Despite her skill as an artist, her paintings were long forgotten, shrouded by her life of political turmoil and imprisonment.

Wharry became deeply involved in women’s suffrage and was jailed in 1912 with other suffragettes in a window-breaking demonstration. She was only released following a hunger strike. Prison doctors dubbed her mentally unstable, but her prison notebooks suggest otherwise as they were full of “delightful drawings of prison life.”

Along with Lilian Lenton, Wharry embarked on a series of terrorist acts, including the arson of a tea pavilion in Kew Gardens for which she was arrested again.[9] 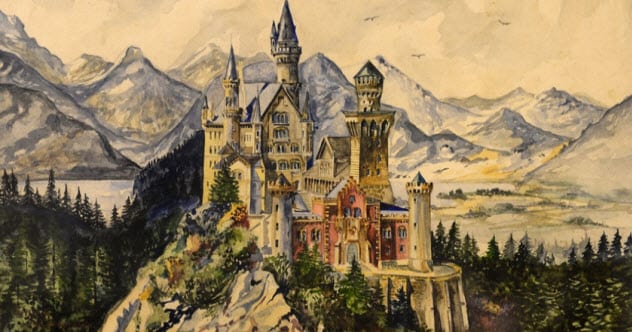 Pretty breathtaking. But we’d argue that you’ll be more blown away by the artist, Adolf Hitler. This particular painting of Neuschwanstein Castle in Bavaria sold for £71,500 in 2015 with questionable morality.

In Mein Kampf, Hitler said he had aspired to become an artist at the Academy of Fine Arts Vienna in his youth. But he was rejected twice, with his drawings likened to mere architectural sketches.

As the head of the Nazi Party in World War II, Hitler can be considered to be responsible for the deaths of six million Jews. Interestingly, the buyer of this particular work stated that he wanted to study “Adolf’s painting spirit.”[10]

Meg is an English student and lover of art.

Read about incredible artwork with secret meanings on 10 Hidden Secrets In History’s Greatest Artworks and 10 Great Works Of Art With Incredible Secret Meanings.

Top 10 Horrifying Artworks That Will Give You Nightmares