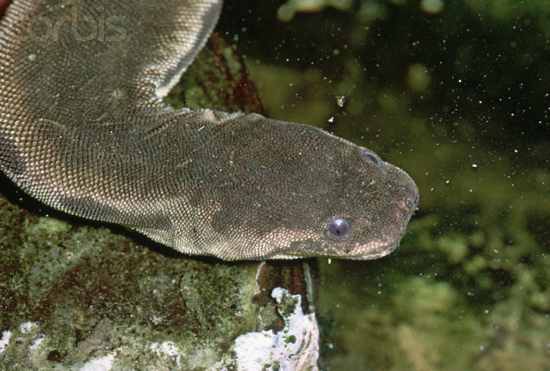 This weird snake is found mostly in Indonesia, although some close relatives are also found in Australia. It gets its name from its unusual skin, which is wrinkled and baggy, and gives the impression of being several sizes too large for the snake. The scales are also unusual; they are large and knobby, hence the snake’s alternate common name, ”warty snake”. They can grow up to 2.5 meters long. Elephant trunk snakes are completely aquatic, and are practically helpless on land; they can’t slither because they lack the broad scales in the belly that are common to most snakes, and an important aid when moving on land. Elephant trunk snakes feed on fish, including catfish and eels; they lack venom, so they use constriction to kill prey; their big knobby scales are an adaptation to hold slippery fish and constrict them underwater.

Another aquatic snake from southeastern Asia, this is a quite unique species, the last surviving member of its genus. Its most notable feature are the strange fleshy tentacles on its snout. These tentacles are actually highly sensitive mechanosensors, which allow the snake to detect movement in the water and strike at any unfortunate fish that swims nearby. Another interesting trait is the tentacled snake’s incredible attack speed; it takes only 15 milliseconds for the snake to capture its prey. But fish have incredible reflexes and a fast strike is not enough sometimes, so the tentacled snake uses a clever trick to make fish swim towards danger. When the fish approaches, the snake slightly ripples its body towards it. The fish immediately darts in the opposite direction… but this is what the tentacled snake expected, so it angles its head so that the fish swims directly into its waiting jaws. Of all snakes, this is the only one known to anticipate the reaction of its prey and act accordingly. Although the tentacled snake is venomous, it poses no threat to humans. It is rather small, at only 90 cms long. Just like the Elephant trunk snake, it is fully aquatic and can barely move on land. Above you can see the videos (including slow motion) of tentacled snakes tricking and feeding on small fish. 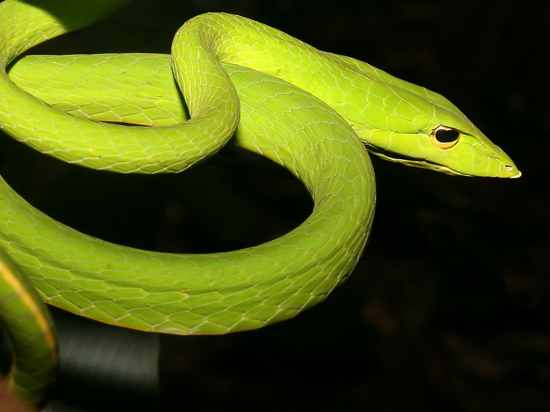 Once again native to southeastern Asia, the long nosed vine snake is a highly advanced arboreal predator; unlike other snakes, it has excellent binocular vision, which allows it to strike at prey with great accuracy. Its eyes are also unusual in having horizontal, keyhole-shaped pupils. Its vine-like body hides the snake from both predators and prey (even the tongue is bright green!) and its light weight allows it to move quickly through the foliage and even reach from one branch to another with half of its body on the air! They feed mostly on lizards and frogs, and although they are venomous, they pose no serious threat to humans; pain and swelling are usually the only symptoms after being bitten by a vine snake, and the symptoms disappear within a few days. 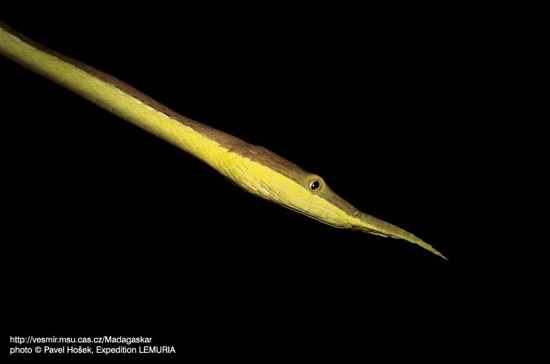 This is easily one of the weirdest reptiles in the world. Just like the Asian vine snake, the Langaha snake (also known as the leaf-nosed snake) is adapted to an arboreal lifestyle and feeds mostly on lizards. Its most interesting trait is, of course, the weird ”horn” or projection on its snout. Both genders have this weird ornament, but males and females look very different from each other; males are yellowish and have smooth skin and a sharp, pointed ”horn”, while females have rough-looking brown scales and a flat, leaf-shaped and serrated horn. This is one of the few cases in which a snake’s gender can be determined easily at first sight. Langaha nasuta snakes are found only in Madagascar’s endangered rain forests. It is venomous and its bite can be extremely painful to humans but not life-threatening. 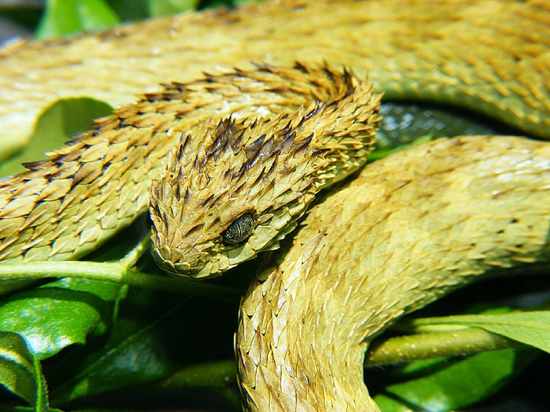 Found in the rain forests of Central Africa, this small but highly venomous viper is noted for its huge eyes and keeled, bristle-like scales which give it an almost feathered appearance (hence one of its common names, ”feathered tree viper”). Atheris vipers grow up to 75 cms long, with males being longer than females (unusual among snakes). Like all vipers, Atheris has long, retractable fangs in the front of its upper jaw; there is no known antidote to its venom, which causes blood clotting difficulties, pain and swelling, and often, death. Fortunately, these vipers usually live far away from human settlements, and therefore Atheris bites are exceedingly rare. 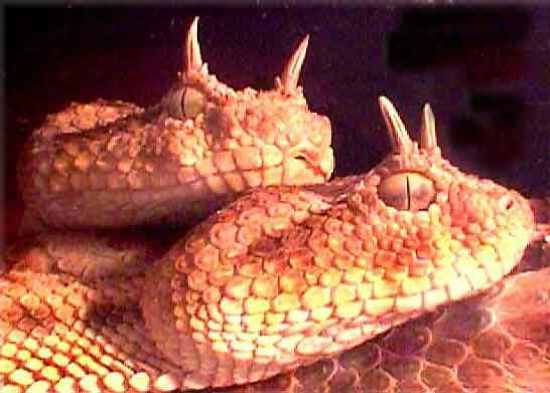 Found in the deserts of Northern Africa and the Middle East, horned vipers are small, usually under 50 cms long. They often have a pair of horns over the eyes, but there are also some individuals that lack them completely, and, therefore, can be easily mistaken for other vipers. They are venomous, but their bite is usually non fatal to humans. When threatened they rub their coils together to produce a warning sound before they strike. The horned viper was formally named ”Cerastes cerastes” in 1768, by Austrian naturalist Nicolaus Laurenti. Cerastes was a mythical Greek monster, a serpent that hid under the sand in the desert and ambushed any passing creature, using its horns as a lure. Ironically, the horned viper itself may have been the real life inspiration for the mythical Cerastes! Indeed, the horned viper hunts by hiding under the sand (leaving only its horns, eyes and nose exposed) and striking at any small animal (mostly rodents and lizards) that comes close. Ancient observers may have exaggerated the snake’s size and dangerousness, giving origin to the Cerastes myth, which Laurenti remembered when naming the horned viper centuries later. The horned viper’s horns, however, are not used as a lure; to date, no one really knows what the horns are used for, or why some horned vipers have them and some don’t. 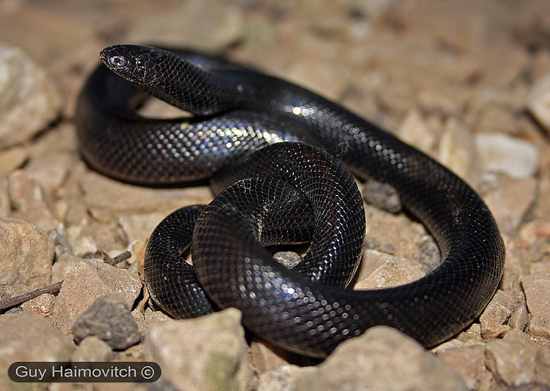 I already introduced this snake in the Sabertoothed Creature list. However, no list on Unusual Snakes would be complete without this one. The Burrowing Asp is a smallish snake from Africa that spends most of its time underground. It feeds on rodents, and has enlarged fangs that function basically as venomous saberteeth, protruding out of the mouth when in use. This means that the Burrowing asp can bite without even opening its mouth- which is very useful, since it prevents dirt from entering the snake’s mouth during the struggle. The fangs are also flexible and can be moved independently from each other, meaning that the snake can stab its prey sideways with one fang, and once it has killed its victim, it can use the movable fangs to actively manipulate the prey’s body for easier swallowing. Burrowing asps are venomous and there are cases of children dying after a bite; however, in adult humans the venom is usually not lethal. However, due to the cardiotoxic and necrotic properties of the snake’s venom, and its ability to inject it deeper than other snakes (due to the long “saberteeth”), harassing or manipulating a Burrowing asp should always be avoided. 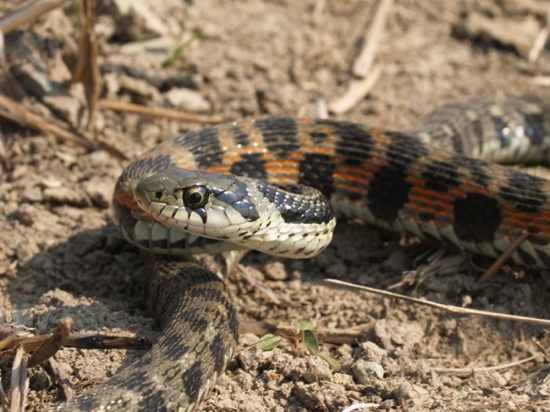 Also known as yamakagashi, or Japanese water snake, this species is found mostly in Eastern Asia. It is small, rarely exceeding one meter in length, and very shy, so much in fact that they were considered to be harmless for a long time, until someone died of a yamakagashi bite in the 80s. Fortunately, due to their docile temperament, these snakes are very unlikely to bite and fatalities remain exceedingly uncommon. Also, since their venomous fangs are located in the rear of the jaws, they can’t inject their venom as easily as other snakes. They feed mostly on frogs and toads. Other than their bright colors, Tiger Keelbacks look kind of normal; however, they have a very interesting defense mechanism. Recently, it was discovered that these snakes feed on poisonous toads; not only are they immune to the toad’s poison, but they can actually ”sequester” this poison and store it in a couple glands they have in the neck. When threatened, the snake releases the toad’s poison from its neck glands. This amazing adaptation not only protects the snake from most predators, but also allows it to save its own venom for hunting instead of wasting it on something too big to eat!

Flying snakes are found in the rainforests of India and southeastern Asia, and, despite their rather alarming name, they can’t actually fly. They are, however, accomplished gliders. When a Flying Snake wants to go from one tree to another, it launches itself into the air while flaring out its ribs and sucking in its stomach, thus flattening and widening its body and turning into a pseudo-concave wing. As amazing as it may sound, Flying Snakes are even better gliders than flying squirrels. While squirrels can glide up to 60 meters from one tree to another, Flying Snakes can glide up to 100 meters or more, and they actually ”slither” in mid air, which gives them better stability and some degree of control over their ”flight”. Flying snakes are venomous, but not dangerous to humans. They feed mostly on lizards and other small animals, and spend most of their time up trees. 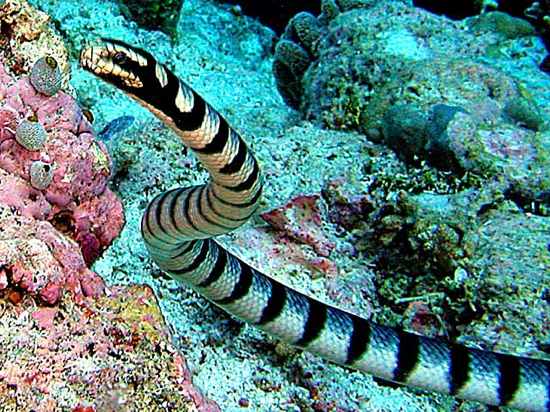 Sea snakes are easily the most unusual of all snakes. They belong to the same family as cobras and coral snakes (Elapidae), but they have adapted to a completely marine lifestyle; in some species, the adaptations are simply incredible. There are 62 species recognized to date, and they are found in the Pacific and Indian Oceans; they are all extremely venomous, with some species, such as the Beaked Sea Snake, having venom up to ten times more powerful than a cobra’s. One sea snake species, the Belcher’s sea snake, is considered by experts to be the most toxic of all snakes, marine or otherwise. Fortunately, sea snakes are usually docile and human fatalities are exceedingly rare. Most sea snakes give birth to live young; this means that they don’t have to return to a beach to lay eggs as sea turtles do (except for a few species). As a result, they have practically lost the broad scales on their belly, which other snakes use to move on land, and most sea snakes are completely helpless out of the water. Some species are indeed so well adapted to the sea, that they can even absorb oxygen directly from the water, through their skin! They also have special glands on their tongue, which expel the excess of salt from the snake’s organism every time it flicks its tongue.

There’s more. Since sea snakes use their venom for hunting, they don’t want to waste it biting predators, and so they have developed some amazing defensive methods. One sea snake species known as the Yellow Lipped Sea Krait has a yellow body, a black head and a rounded, black tail that looks just like the head. The snake hunts by probing crevices and burrows in coral reefs with its head, which means it can’t see predators coming while doing so; however, since the tail looks so much like the head of the snake, potential predators such as sharks are fooled into believing that the snake is alert and ready to strike, and usually leave it alone. But perhaps the most amazing sea snake is the Golden Sea Snake. This species has photoreceptors on its tail, allowing it to detect light variations and possibly detect approaching predators while feeding as previously described. That’s right; to some degree, the Golden Sea Snake can see with its tail! Where will evolution take Sea Snakes next? We still have a lot to learn about them, but even what we know is enough to earn them the first spot in this list.