Sheep leap through the minds of insomniacs, and for some, that is about as interesting as these creatures get. However, sheep are not just farm animals waiting to become mutton. They are at the cutting edge of lifesaving technology and revealed a solid clue about a mysterious and devastating autoimmune disease.

Studies aside, sheep stories are often weird. There was the Auschwitz sacrifice, sheep enrolled in a French school, and a dramatic cliff rescue that got up the RSPCA’s nose. 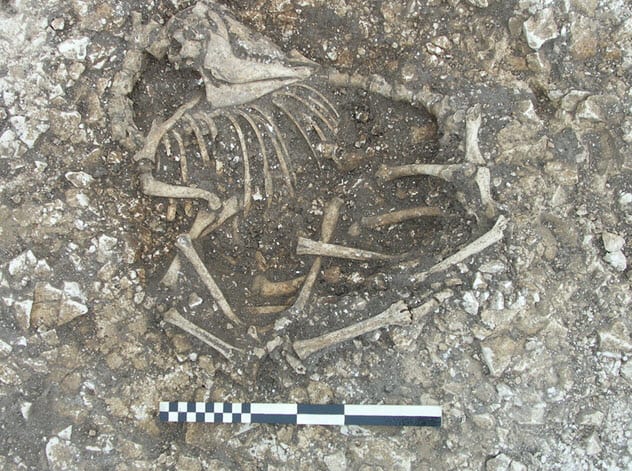 Around 400 BC, an Iron Age group lived in southern England. In 2015, archaeologists happened upon the ruins of their homes and found several pits. In the absence of refrigerators, the villagers had cunningly dug holes in the chalky ground that kept edibles cool.

These “fridges” appeared to have had a life span of about a year. Afterward, they were ritually decommissioned by leaving a sacrifice within. Most offerings consisted of whole animals like dogs and pigs. Others were weird mixes. There was a six-legged sheep and another sheep with a cow’s skull on its behind.

Apart from the sheep-cows, there were horse-cows and a woman. Cut marks on the woman’s shoulder suggested that her throat had been cut. That was not the only thing suggesting that she was also a sacrifice. This could not have been a burial because locals never buried their dead during this era. Also, her facedown body was arranged to match the limb positions of the animals on which she rested.[1] 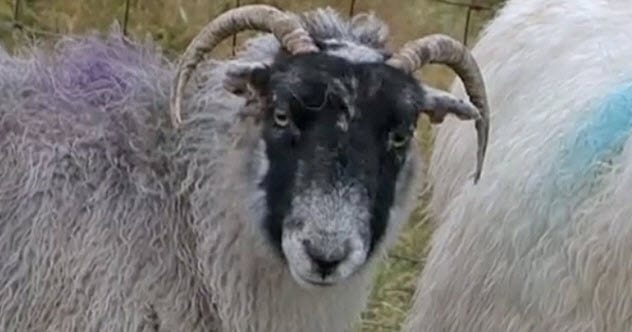 According to Guinness World Records, the oldest sheep that ever lived was 28 years and 51 weeks old. During her lifetime, she produced 40 lambs. However, she passed away in Wales during 1989.

The next living oldest sheep was Lucky, an Australian ewe that was a Polwarth-Dorchester cross. After she died in 2009 at age 23, Guinness World Records searched for a new champion. As it turned out, it was a sheep called Methuselina. She lived on the Isle of Lewis and Harris, close to the coast of Scotland.

The blackface sheep’s age was recorded on her ear tag. When she died in 2012, she was 25 years and 11 months old. She never received the title of “world’s oldest sheep” because her owner never applied for recognition with the record-keeping organization.[2]

Sadly, as her demise was not natural, Methuselina could have grown to be a lot older. The sheep fell off a cliff to her death. 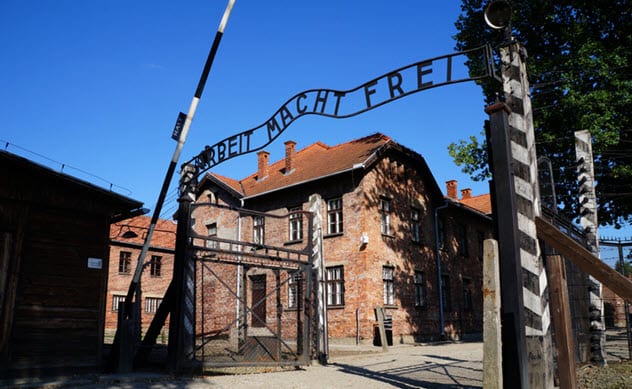 Auschwitz was the biggest death camp used by the Nazis during World War II (1939–1945). Located in southern Poland, over a million people were killed because they were “undesirable.” These included Jews, Poles, Romas, prisoners of war, and others. The site is now a museum.

In 2017, a group of people decided that it would be the perfect location for a demonstration. While nude, they gathered at Auschwitz’s iconic entrance and chained themselves to the gate. That was just the tail end of their tasteless act, which started with fireworks in the car park and a huge banner with “love” written on it draped over the gate.

The 12 protesters did not practice what the banner preached. In full view of everyone, they slaughtered a sheep. The demonstrators also filmed the whole thing using a drone. The museum guards eventually pried the naked people off the gate and arrested them.[3]

In 2018, the group was convicted of desecrating the site. Their claims of protesting against the war in Ukraine did not help. Two were sent to prison for a year, and the rest were fined. 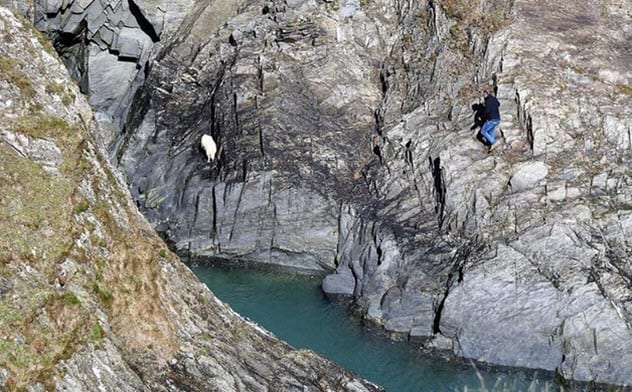 In 2019, a ewe took a tumble off a cliff in Wales. She was unhurt, but the animal became trapped on the rocks. A Canadian tourist arrived at the cove in Pembrokeshire and noticed the sheep down below. The unnamed man’s decision to attempt a rescue was photographed by Andrea Williams, a walker who noticed the unfolding drama.

Remarkably, the ewe stayed calm and even allowed the man to haul her back up the cliff by the scruff of her neck. When the photos hit Williams’s Facebook account, people quickly lauded the man’s actions as kind and heroic.

The RSPCA was not so fond of the Canadian, whom they said had performed a “dangerous stunt.” The Coastguard agreed, and both organizations called for people to contact trained professionals in the future.

Williams’s husband, a retired police officer, felt that the man had put himself in minimal danger. The Canadian had climbed carefully, and had he dropped into the sea, the water was only 3 meters (10 ft) deep.[4]


6 They Go To School 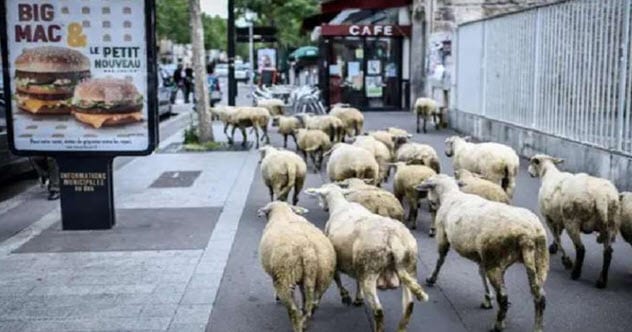 In 2019, French parents heard that a class at a local school might shut down due to dropping student numbers. They were understandably upset. After all, the “drop” was small. For some reason, the national education authority decided it would be the best move after numbers went from 266 to 261.

The primary school, located in the French Alps, served the village of Crets en Belledonne. One of the village’s farmers took his flock of sheep and went to the school. He had a plan.

After arriving at the school, he produced birth certificates for 15 sheep and enrolled them as students. In most other places, the act would have caused a legal incident, a call to the police or animal welfare, or perhaps a psychiatrist.

However, in this case, the woolly students were signed up during a ceremony watched by the school’s staff, children, and the kids’ parents. Although the sheep never sat through a history lesson or received homework, the initiative worked. The class stayed open.[5] 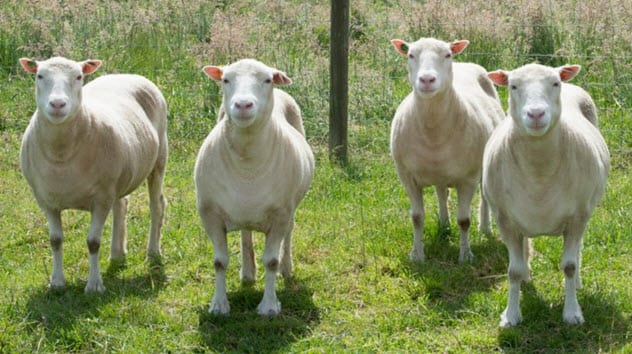 Dolly the sheep was born on July 5, 1996. She was the first cloned mammal. But despite making history, the ewe’s medical problems were obvious. When she was a year old, Dolly’s DNA was already aging. At five, she limped about with arthritis. A year later, she died from a virus. Her six-year-old life was usually twice as long for the rest of her breed.

As time went by, Dolly was often cited as proof of cloning’s failings. To test the rumor, the University of Nottingham cloned 10 lambs from Dolly using the same technique that created her. They were born in 2007, and only four survived longer term.

For health comparisons, the four “Nottingham Dollies” were raised with other sheep. The latter consisted of non-Dolly clones and normal sheep. They were given a peaceful life, and nine years later, the scientists announced that the four Dollies were looking healthy for their age.

Only one had developed moderate arthritis. It would appear that cloning does not accelerate aging as their cardiovascular, joint health, and metabolic levels were the same as other nine-year-old sheep.[6]

In 1968, the University of Sydney froze the sperm of prize merino rams. The batch sat in liquid nitrogen for 50 years. As it was considered to be the world’s oldest sperm, scientists were curious about how time had affected its quality.

Once thawed, the semen appeared to be as active as samples frozen for only a year. To test for fertility, 56 ewes were artificially inseminated. Just 34 gave birth. However, the 61 percent pregnancy rate was higher than the 59 percent average from sperm stored for 12 months.

The lambs were healthy but more wrinkly than normal merino offspring. This trait was inherited from their sires, who lived during a time when merinos were bred to have more folds. More skin meant more wool.

The wrinkles were later erased from the breed because they made shearing difficult and increased pest problems. Having lambs with extinct characteristics was welcomed by modern geneticists. Also, their successful births meant that endangered species—and men undergoing fertility-killing cancer treatments—can have their sperm saved for decades.[7] 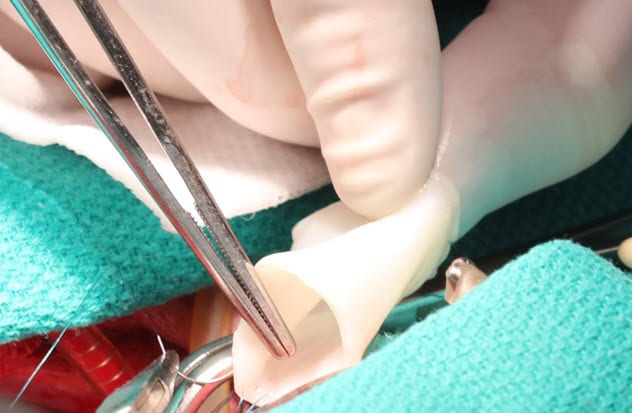 Children with certain heart defects sometimes need to have their blood vessels replaced—in particular, those linking the heart and lungs. The material of current reconstructed vessels cannot grow with a child. This unfortunate mismatch means that patients must receive up to seven surgeries to replace old vessels with larger ones.

In 2016, researchers tested a new technique on five-week-old lambs. They replaced the animals’ own heart-to-lung blood vessels with something grown in a tube. The graft began as sheepskin cells that grew into a sheet. After a while, the cells were flushed out and left behind a protein-based structure that was implanted in each lamb.

The first success came when their immune systems accepted the transplants. Best of all, the blood vessels grew with the maturing lambs. When they were a year old, the vessels functioned almost like normal adult arteries. Once refined to meet human standards, the procedure could reduce the operations for children to a single surgery.[8] 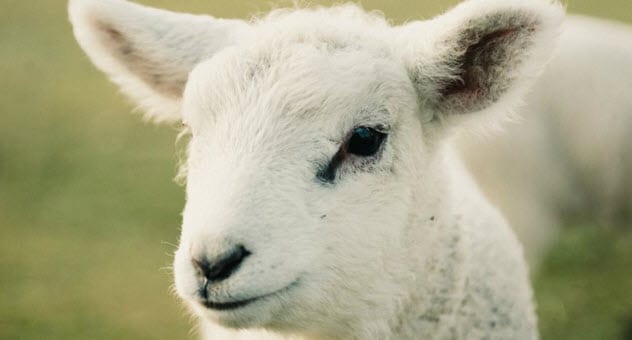 Multiple sclerosis (MS) interferes with spinal cord and brain communication, often with devastating symptoms. Doctors do not know the triggers, and there is no cure.

Past research already showed that MS patients had more antibodies to a toxin called epsilon. In 2018, a study tried to gain more clarity on the matter. The University of Exeter analyzed 250 volunteers, half of whom had MS. Once again, they found a massive toxin difference between the two groups.

Around 43 percent of those who had the disease displayed antibodies for epsilon. The MS-free group’s level was at 16 percent. Interestingly, the toxin is created by the bacterium Clostridium perfringens.

The organisms mainly live inside the gut of sheep. Statistics also showed that the MS rate is usually higher in areas with large numbers of sheep. However, this does not mean that hugging a lamb will cause multiple sclerosis.

All researchers can say for sure is that a link exists between the toxin and the disease. If proven beyond a doubt, the information can help researchers to design a vaccine capable of preventing or curing the early stages of MS.[9] 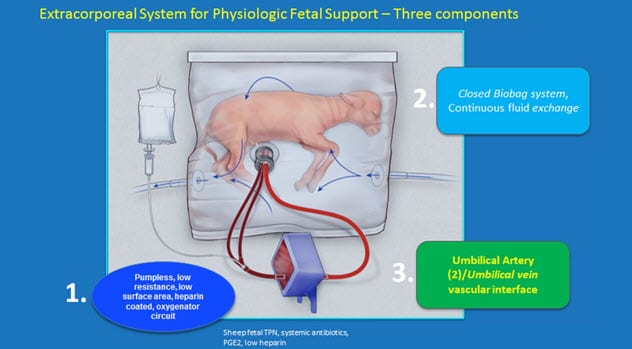 In the United States, the leading cause of infant mortality is extremely premature births. Such babies are born before the 26th week of pregnancy. In 2017, scientists tested an artificial womb designed to save early infants. Eight lambs were chosen as test subjects. They were also premature, having only reached 100–115 days of a normal 152-day sheep pregnancy.

In terms of human babies, their lung development was the equivalent of an infant at 22–24 weeks of pregnancy. Survivors that age often have chronic lung problems for life. The aim was to keep the animals alive for long enough to ensure healthy organ development.

After the lambs were placed inside the artificial womb, they lived in and breathed a liquid like amniotic fluid and received nutrient-rich blood. Some survived as long as 28 days, opened their eyes, and developed normal organ function. Most of the lambs were euthanized for investigative reasons, but two of the sheep are still alive and living on a farm.[10]

The artificial womb worked. However, years of additional tests are required before it can receive the first human baby.

Read more unusual stories about sheep and other animals on 10 People Killed By Animals You Wouldn’t Expect and 10 Common Misconceptions About Animals.