It is often said that necessity is the mother of all invention, and at no other point in a country’s history is necessity greater than in war-time. As a result, the widespread, and often desperate, fighting led to many new inventions, from computers, to jet engines, to atomic bombs. However, many of these inventions were downright bizarre, and this list aims to explore the inventions which have been lost to the annals of history. Of course, there are far too many of these strange weapons to be included in a single list, so feel free to mention any additional ones you feel should be on this list in the comments. 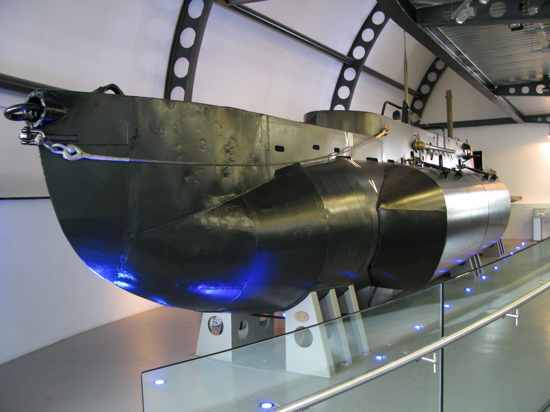 The x-class was a series of submarines built by the Royal Navy during the Second World War. These tiny submarines only displaced 30 tonnes of water when submerged, were 15.55 metres (51ft) long, and carried a crew of 4 (commander, navigator, engineer and diver). There were designed to be towed to the target area by a full-sized “mother” submarine. The X-craft would then be detached and infiltrate the target, laying down two side charges, each containing 2 tonnes of amatol. They would then make their escape and rendezvous with the “mother” submarine to be towed home. The first attack was launched against the German battleship Bismarck. Six X-craft were designated for the operation, but two were lost to accidents en route, and a third suffered mechanical problems. The fourth X-craft was believed to have been sunk by German fire during the attack. The remaining two managed to lay their charges and seriously damage the Bismarck. Other X-craft played an important role with regards to the D-day landings. One surveyed the invasion beaches beforehand and collected soil samples, and two others acted as lightships during D-day itself to guide landing craft to the correct beaches. 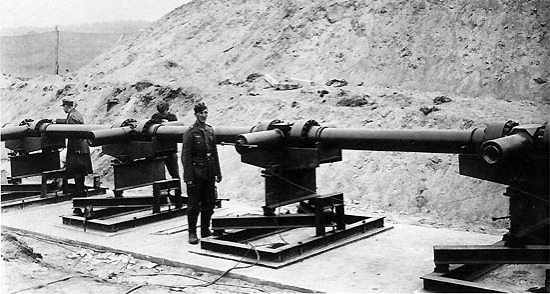 Developed as a so-called vengeance weapon in order to strike back at London, as Allied bomber fleets pounded German cities to rubble, the V-3 cannon was capable to delivering a 140kg (1310lb) shell to a range of more than 161 km (100 miles). The secret to this enormous range was a number of side channels attached to the 460ft (140m) barrel. These channels each contained an electrically fired propellant charge which helped to accelerate the finned shell to a muzzle velocity of 1500m/s (4920 feet per second). Hitler was most impressed by the prototype, and ordered 25 of them to be built at a site at Mimoyecques, in France. However, this site was heavily bombed by Allied bombers, which forced the Germans to abandon it. Two shorter-barreled versions (164ft) were later built and used against Luxemburg, where they fired a total of 183 shells, only managing to kill 10 civilians and injure 35. Shortly afterwards, both guns were captured by American troops. 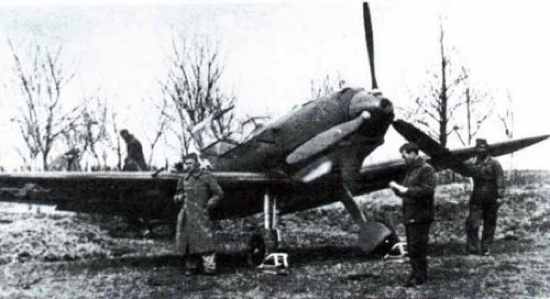 During the later part of the war, Germany became subject to massive bombing attacks by heavy Allied bombers. In desperation, Nazi Germany formed a unit that they hoped would temporarily halt the British and American bomber offensive to give them time to build up large enough quantities of the formidable Me 262 jet fighter, to counter the Allied bombers. This unit would fly Me-109 fighters, which had been stripped of weapons and armor in order to increase their speed. Hermann Goering, commander of the Luftwaffe (German Air Force) proposed that these fighters should wait for the bombers at high altitude. They could then dive at the enemy at high speed, and use their propellers to destroy the bomber’s tail, after which, the German pilot would attempt to parachute to safety. More than 2000 pilots volunteered for the unit, although they only had 180 planes available. The unit’s first attack was launched against a group of American bombers on April 7th, 1945. Of the 120 pilots which took off, only 15 returned, and they only managed to destroy 17 American B-17 bombers and 5 P-52 Mustangs.

As American forces advanced nearer and nearer the Japanese mainland, the Imperial Japanese armed forces became increasingly desperate to prevent Japan’s defeat. The Ohka was developed in a last-ditch effort to destroy the American fleet. It was a purpose-built kamikaze aircraft that was armed with a warhead weighing up to 1200kg. As it had no landing gear, it was carried to the target area by a G4M ‘Betty’ bomber. Once within range, the Ohka was released and steered towards an American ship by the pilot. It would go into a dive before igniting 3 rocket boosters which would accelerate it to up to 650mph before crashing into the enemy ship. At such a high speed, it would be almost impossible to shoot down with anti-aircraft fire. Despite more than 800 being built, however, only a few were used as most were being stockpiled for the anticipated invasion of Japan which never came, thanks to the atomic bomb. 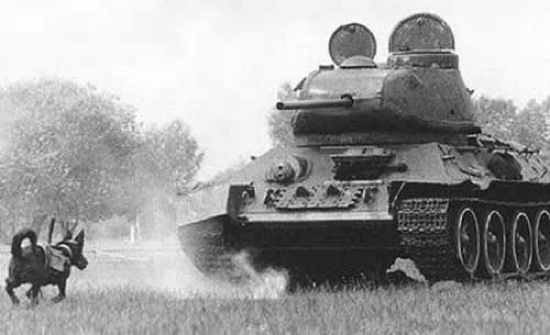 Deployed by the Soviet Union during the Second World War, they were originally deployed in an attempt to halt the German advance during 1941. The dogs were kept hungry, and food was placed under tanks in order to teach them to look under vehicles for food. Each dog was fitted with a 10-12kg mine. The detonator was attached to a 20cm wooden lever which jutted vertically above the dog. When it dived under an enemy tank, the lever would catch on the hull and detonate the mine, killing the dog and hopefully disabling the tank. In action, these dogs proved less than effective. Many were scared away by German gunfire, which caused them to run back to their handlers, often detonating the mine. Other dogs refused to dive under moving tanks as they had practiced on stationery vehicles, and others jumped under Russian tanks. They did succeed in damaging some German vehicles, but Soviet claims that 300 German tanks were put out of action by these dogs is widely optimistic.

Designed near the end of the war, this strange-looking interceptor required no run-way for take-off. Instead, the aircraft was launched up a vertical 8 meter (25ft) rail attached to a small tower. The flight of the fighter would be controlled by radio from the ground until it neared a group of Allied bombers. Then, the pilot would take over and jettison the nosecone to fire off salvos of rockets into the formation. After firing off all of the rockets, and running out of fuel, the plane would glide down to 3000m (10,000 ft), whereupon a number of parachutes in the rear fuselage would deploy. The entire front of the aircraft (including the cockpit) would detach from the tail, and then the pilot would (hopefully) parachute to safety. Only the pilot and the tail (containing the rocket engine) would be recovered from each mission – the cockpit, wings, and nose were all expendable. Despite the death of a test-pilot during the first manned launch of the plane, 36 of these fighters were built, although none were before the end of the war. 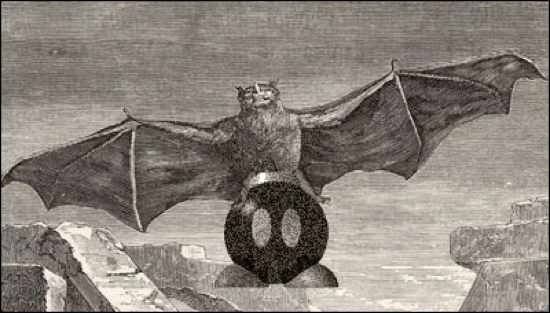 Developed by America in the wake of Pearl Harbor, this seemingly ridiculous idea proposed that hundreds of bats should be captured, and a tiny incendiary bomb be attached to the body of each. These bats would be placed in a bat carrier which would subsequently be dropped from a bomber. A parachute would deploy at 1000 feet to slow its descent, and the trays inside the carrier would separate out to allow some 1040 bats inside to escape. Once free of the carrier, the bats would disperse and roost throughout the buildings of the Japanese city beneath. Shortly afterwards, the timer-delayed bombs would detonate, sparking raging fires throughout the mainly wood and paper buildings. During one test drop, a group of bats roosted inside several of the testing facilities’ warehouses and buildings, burning them to the ground. Luckily for thousands of bats, the program was cancelled in 1944, due to the development of the atomic bomb. 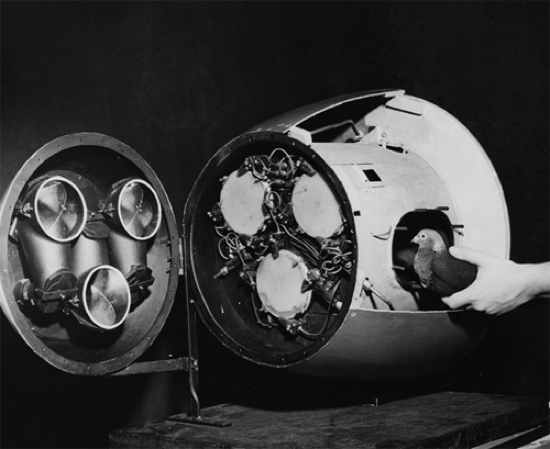 This was yet another attempt to use an animal to deliver explosives to an enemy target. It was first proposed by American psychologist B.F.Skinner, as a way to delivering a missile accurately against a target, by placing a pigeon inside the missile. An image of the target would be projected in front of it, and the pigeon would be trained to recognize it. It would then peck on one of four levers (up, down, left or right) until the target was dead centre of the screen. They were encouraged to do so by their training, where they were awarded with corn for keeping the target in the centre. They were surprising adept at this, (in training) being able to track a target which jumped 4 or 5 inches a second on the screen. The National Defense Research Committee committed $25,000 to this research, and the army modified several missiles for this purpose before it was decided that electronic guidance would be superior, and the project was scrapped. 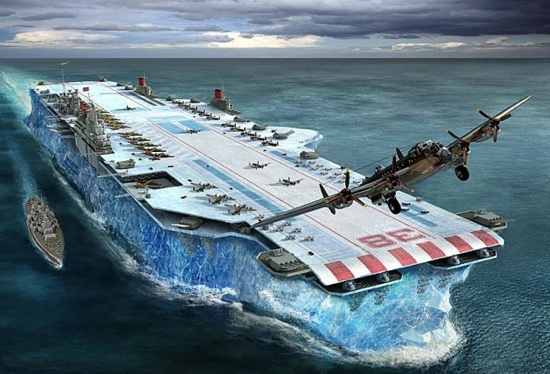 Project Habbakuk was the name of an ingenious project thought up by Geoffrey Pyke. He envisaged that by taking a large iceberg of ice floe, levelling off the top, and hollowing out the inside, it could be used as a landing platform for aircraft. At the time, the Allies were losing huge numbers of supply ships to German U-boats in the Atlantic. Aircraft were extremely adept at hunting and destroying surfaced U-boats, but they lacked the range to cover the entire Atlantic. Providing a landing platform in the middle of the ocean would therefore give the U-boats nowhere to hide. However, ice proved unsuitable as it split easily, and icebergs themselves are prone to rolling over. Fortunately, two scientists in New York soon discovered that by freezing water with wood pulp, they could create a strong but buoyant substance they christened pykrete. The final design called for a giant carrier 600m (2000ft) long, built out of pykrete, fitted with an extensive cooling system to prevent the pykrete melting, displacing 2.2 million tons, and carrying 150 planes. Unfortunately, research was halted in early 1944 for a number of reasons: the growing numbers and effectiveness of conventional carriers, the huge cost ($100 million) involved, and the technical difficulties of building and refrigerating such a massive structure. 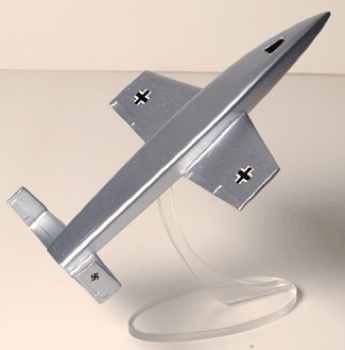 This was probably one of the strangest and most radical weapons Germany proposed during the Second World War. It was a candidate for the ‘Amerika Bomber’ initiative, which attempted to develop a bomber which had the range to attack mainland America. It was based upon the idea of placing a plane on a 3 km (2 mile) long rail, which would be propelled to 1900 kph (1200mph), by a rocket-powered sled. Once airborne, the Silbervogel would then fire off its own rocket engines to propel it to a height of 145km (90miles), traveling at 22100 kph (13700 mph). It would then slowly descend into the stratosphere, where the flat body of the plane would generate lift due to the increasing air density. This would cause it to rise again, and the plane would progress around the world in a series of ever shallower ’bounces’. It would then deliver a 4000kg (8800lb) bomb (possibly radiological) to somewhere in America, before landing at a Japanese base in the Pacific. In the end, the project was far beyond the capabilities and resources of Nazi Germany, and only existed as a mock-up.