The parable of the good Samaritan is known to most of us: a traveler waylaid by bandits and left for dead is bypassed by countrymen and clergy able to help, but too concerned for their own safety or affairs. Only a lowly Samaritan, with no reason to aid his enemy, stopped to help. Moreover, the Samaritan risked his life transporting the traveler to safety, and even paid for his recovery. Jesus said to the people surrounding him “Go and do likewise.” This isn’t a sermon – just 10 people who did likewise.

We’ll start light, because the list gets heavy pretty quick. Bao Xishuan is listed by Guinness as the tallest man in the world (7ft, 8.95 in), and his arm extends 1.06 meters. In 2006, the Mongolian herdsman got the call from Chinese vets that his wingspan was urgently needed at the Funshun aquarium. And no, it didn’t involve basketball.

The doctors had repeatedly failed to remove painful plastic shards that two dolphins had swallowed, and the animals were slowly starving. All surgical instruments had failed to remove the fragments. Mr. Bao immediately traveled to the aquarium, and workers pried the animals’ jaws open with towels so he wouldn’t be bitten. With scores of onlookers watching, Bao reached deep into the animals’ stomachs and removed as many shards as he could find. The fragments he couldn’t reach were safely digested and the dolphins made a full recovery. Bao accepted a few pats on the (lower) back and returned to his fields.

Staying home due to bad weather, 29 year old grape picker Victor Perez heard a local radio alert that a young girl had been abducted. He was in his yard when he saw a passing truck that matched the description of the kidnapper’s vehicle. Fearing the worst, Perez got into his own vehicle and gave chase, even though he could not see the child. When he finally did see her, he screamed at the driver “That’s not your little girl!” over and over until the kidnapper pushed her onto the street and drove away.

Perez stayed with the girl until the police arrived and reunited the child with her mother. The California Highway Patrol later arrested Gregorio Gonzalez with kidnapping, false imprisonment, and tragically, sexual assault.

Riding the Q train into Brooklyn one Friday night, Muslim Hassan Askari noticed ten thugs hassling a young couple for replying ‘Happy Chanukah’ when greeted with ‘Merry Christmas’. Fearing for the woman’s safety, he pushed one thug away, and the gang pounced on the 5’ 7”, 140 lb. hero. This gave the two victims time to pull the subway’s emergency brake and summon help.

Askari received two black eyes and a sore nose for his efforts, but never went to a doctor because he worked two jobs and couldn’t afford medical care. Victim Walter Adler (who received a broken nose and required four stitches for a split lip) was shocked that “a random Muslim kid helped some Jewish kids, (and) that’s what’s positive about New York”.

On April 7, 2010, Julien Duret was strolling New York’s South Street Seaport with his girlfriend when he saw something fall into the water. At first he thought it was a doll, but then realized it was a baby. In an instant he stripped down and dove into the filthy, freezing East river. Reaching her first, Duret handed the unresponsive child to her father, who was then lifted to safety. Once out of the water, young Bridget Anderson opened her eyes. Anderson’s father praised Duret as ‘the first man in the water’.

Back on the pier, onlookers shed their dry clothes and gave them to the freezing Duret. He said he was ‘glad to help’ and went on his way. Only later did he realize the rescue had captured the hearts of New Yorkers, who were desperate to find the “Mystery Frenchman.” Once discovered, the humble engineer finally relented to an interview, saying ‘he’d never done anything like this before”. 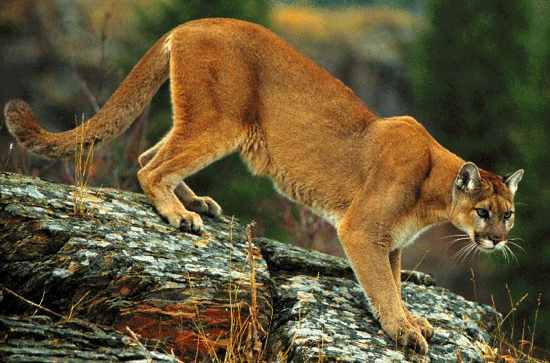 Marc Patterson was camping with his wife and daughter when 12-year-old Colton Reeb was attacked by a wild cougar near Clinton, British Columbia (Canada). Investigating a ‘deathly scream’, his daughter told her father ‘Dad, there’s a cougar on him’. Patterson ran to the site and saw the boy had rolled into a ball, protecting his head, which was already in the cougar’s mouth.

Patterson kicked the cougar five times to no effect, but then put his knees on its back, and began choking the animal. After a long five seconds the powerful cat let go. Patterson took the boy and growled backing up to his truck; the cougar staring back the entire time, ears flattened and growling back. The boy was then rushed to Ashcroft hospital and received surgical treatment for injuries to the face, neck and torso.

The Patterson family spent that night in a Clinton hotel, and conservation officers later killed the cougar only 15 meters from the original attack site. They theorize the cougar mistook the small boy for prey, since the campsite is heavily forested and populated with animals that cougars hunt.

In 2007, 50 year old construction worker Wesley Autrey was taking his two daughters to school on the subway. While waiting for the train, fellow passenger Cameron Hollopeter had a seizure and fell off the platform, landing between the two rails. With the train arriving in mere seconds, Autrey jumped from the platform and pushed the young man as deep into the ground as he could go. The incoming train rolled over both men, passing within inches of their heads.

When the onlookers stopped screaming, Autrey exhorted them to ‘tell the girls their father is okay”. The transit authority then arrived, cut the power, and extricated the lucky pair. Autrey refused medical treatment, and calmly took his kids to school. His only regret was that his hat got greasy.

Horia Cretan was working when he heard a scream from a nearby building. Looking up, he saw smoke in a window, but couldn’t see much else. Something clicked inside him, so he ran to the fire escape, pulled down the ladder, and began to climb. On reaching the window, he encountered a man sitting there in shock. While pushing him out to safety, Cretan learned someone else was in the apartment.

He entered the burning room, scarcely able to breathe or see. Firefighters broke into the apartment moments later and handed him a 4-year old boy. Cretan wrapped the child in curtains and carried him back down the fire escape to safety, stopping only to perform CPR. The child survived the ordeal with no lasting injuries. Cretan recounted the story on the talk show “Good Morning America”, where he also proposed to his girlfriend (she accepted). 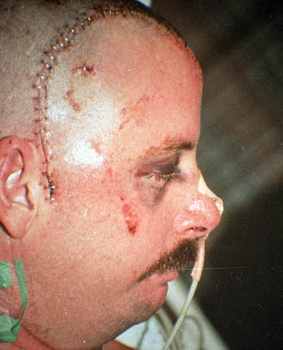 Watching the Los Angeles race riots on TV, Reverend Bennie Newton learned that wilding thugs were assaulting truck driver Reginald Denny (pictured above) on a nearby street corner. He rushed to the scene, but when he arrived, Denny was gone. But the gang was already pummeling another innocent bystander.

The mob had ripped construction worker Fidel Lopez from his truck, robbed him of $2,000, bashed his forehead open with a car stereo, and even tried to slice his ear off. Then they stripped him naked and spray painted the married father’s chest, torso and genitals black. Reverend Newton saw the depravity and threw himself over Lopez’s body. Waving his Bible, Newton yelled “Kill him and you have to kill me, too!”

Shamed back to reality, the crowd dispersed while the minister prayed in the street for Lopez to regain consciousness. When he could not hail an ambulance, Newton drove Lopez to the hospital himself.

Martin “Lennie” Scutnik was a low-level manager at the US Congressional Budget office in 1982. Walking home in the ice and snow on January 13, he saw Air Florida Flight 90 crash into the frozen Potomac River. Most of the passengers never made it out of the submerged plane, and the ice was quickly taking the few who did.

A rescue helicopter repeatedly lowered a rope to the survivors, but they were too weak to grab the line. Seeing this, Scutnik jumped into the icy water, and assisted a drowning woman to the river shore, saving her life. 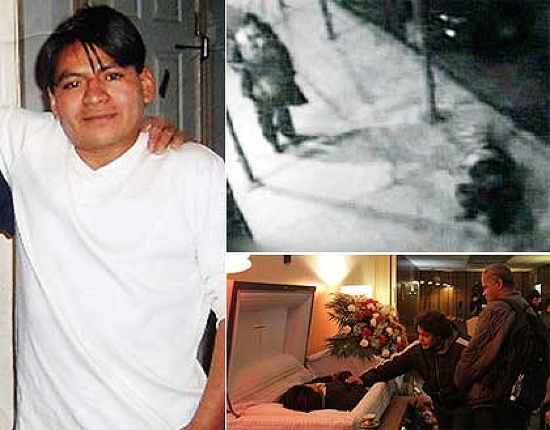 On April 18, 2010, Guatemalan immigrant Hugo Alfredo Tale-Yax came to the aid of a woman being threatened by a man wielding a knife. Tale-Yax struggled with the attacker, but was eventually stabbed and left to die on a Jamaica, Queens (NY) street. The woman and the attacker fled in different directions while he lay bleeding. Video surveillance filmed portions of the attack and its disgusting aftermath.

Cameras showed that one man photographed Tale-Yax with a cell phone. Eighteen others saw or walked right past him. All refused to render aid or contact authorities. The closest anyone came to helping was a man who shook the body vigorously, but walked away after seeing the pool of blood. Firefighters arrived fifteen minutes later, but by then it was too late.

Police are still looking for the suspect, described as a 5’6” male with a medium build, wearing a green short sleeve shirt and dark pants. Information related to the crime can be left anonymously at 800.577-TIPS or here.