Lots of bodily features get attention. There are songs exulting eyes, lips, butts, legs, breasts, hair — but never a nose. It’s about time someone gave noses their due credit, don’t you think? So, without further ado, here are some really extreme schnozzes. This list is courtesy of Sasha Rosser. 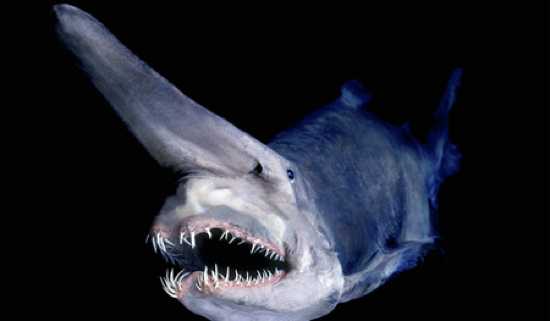 It’s amazing this shark manages to eat with that enormous snout sticking out of his face. You could probably land planes on that thing. And who knows what it’s good for–it’s probably the product of ridiculous evolutionary female choice selection. Or maybe the Cloverfield monster uses goblin sharks as darts, and only allows those with the biggest noses to survive. In any case, its rostrum exceeds any other shark’s in relative size, which is pretty darn extreme. 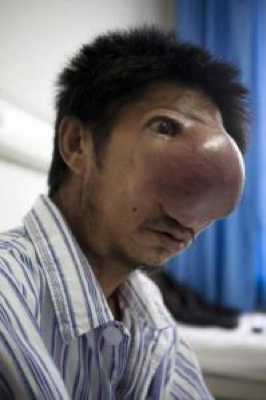 Meet Fei Jianjun. One day, he discovered an unpleasant red bump on the tip of his nose, but did not seek medical attention due to poverty. Over the next year, his honker enlarged to the size pictured above, so large that his eyes were literally pushed to sides of his face, earning him “diseased freak status” in his village. As such, Fei rarely left his house, as he was thought to be a vector for illness. To boot, it shouldn’t come as much surprise that, once your nose swells to the size of an apple, considerable pain results. Eventually, a local hospital offered him free surgery, and a CT scan revealed that the cause of his troubles was a rhinocarcinoma, which they shrank via radiation. 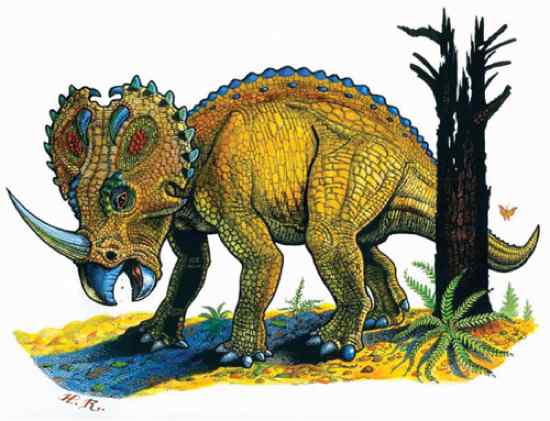 The rhinoceros has a pretty extreme nose. Its name means “nose horn”, after all. But why include a silly rhinoceros on this list when a much larger, much more extreme version of such a nose once sniffed the earth?

Of all the unicorn-like ceratopsids, the monoclonius has, by far, the largest nose horn. At 2.7 m in height, this brawny beast could snag a white rhino on its horn and toss it like a plush toy. You could also wrap lights around it and pretend it was a small Christmas tree. You know the holidays get extreme when you use a dinosaur nose to supplement decorative traditions. 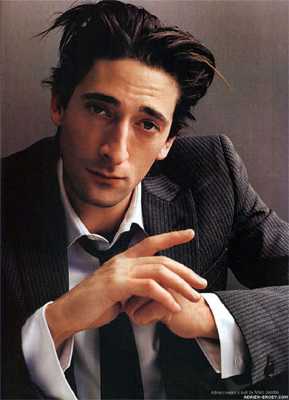 Adrien Brody’s nose is the Mount Everest of Hollywood schnozzes. It dwarfs other actors’ noses and cackles maniacally, screeching tyrannical nose insults in the form of snot rockets. It towers menacingly, Barad-dur-like, growling malediction in the language of Mordor. It snores, and tectonic plates shift. And so on.

Brody’s nose is also probably partially responsible for landing him his role as Jewish-Polish pianist WÅ‚adysÅ‚aw Szpilman, in The Pianist. His masterful portrayal of said role then landed him an Oscar, not to mention the opportunity (which was taken) to ravish Halle Berry with a kiss. Getting an Oscar and making out with Halle Berry? That’s an extreme nose. 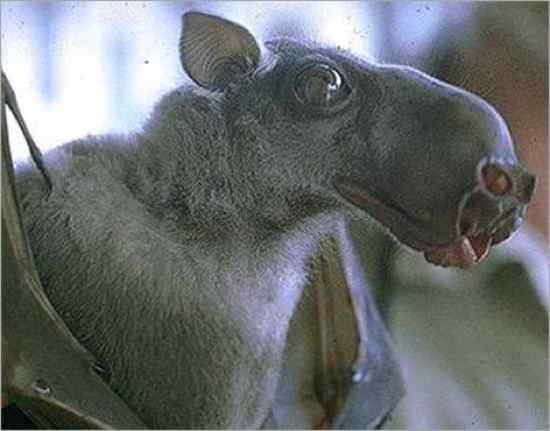 Bats tend to look fairly hilarious. Some have enormous ears, and some have enormous noses. In fact, the aptly-named hammer-headed bat’s nose exceeds the volume of its brain by a factor of at least 2. It also contributes heavily to the species’s sexual dimorphism, with only males possessing the enlarged rostrums. These noses, in addition to lengthened mouth cavities and larynxes, enable male hammer-headed bats to emit loud honks.

It probably comes as no surprise that the caliber of these honks influences how sexually attractive the males are to coeds. This phenomenon can be seen in full-throttle when males gather together, often around riverbanks, to compete for mates in a behavior known as lek mating. Effectively, a gaggle of males sit around trying to out-honk each other while the females fly around listening in for the finest honks, much like a bar scene where scads of males try out their pickup lines. Since nose size contributes to the quality of the honks, females select for the finest, and probably most pronounced, noses. When a nose determines whether one gets laid or not, one must submit to the extremity of said nose. Plus, these fellows can allegedly be used as hammers. And hammers are useful. 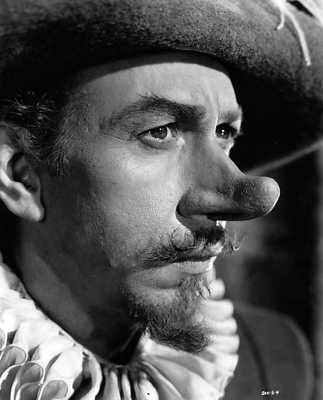 Like many great men, the fictional Cyrano de Bergerac falls in love with his cousin, Roxane. And, also like many great men, Cyrano is profoundly ugly, due in large part to his large nose, which causes him great distress. People, cruel as they must be to make Cyrano pitiable, say that his nose is large enough to be used as an umbrella.

In the eponymous play, Cyrano demonstrates mastery of duelling, music, wit and so on. He also writes beautiful love sonnets and the like, but is too shy to approach his buxom cousin with them. Meanwhile, she falls in love with the handsome, but stupid, bloke who hasn’t the parlance to charm her. This mentally-impaired Adonis asks Cyrano to furnish him with the verbiage to fully woo Roxane, which Cyrano agrees to do. Roxane eventually falls in love with these words, and when she finally discovers that it is Cyrano who was behind them, she falls for him, nose and all. Of course, to be properly depressing/moving, she admits her love to Cyrano as he is dying.

If we are to subscribe to the Sixteen Candles-y notion that ugly people persevere as sharp-witted, successful and talented, all of Cyrano’s skills owe themselves to his nose. Plus, it can apparently be used to shield people from rain. Totally extreme. 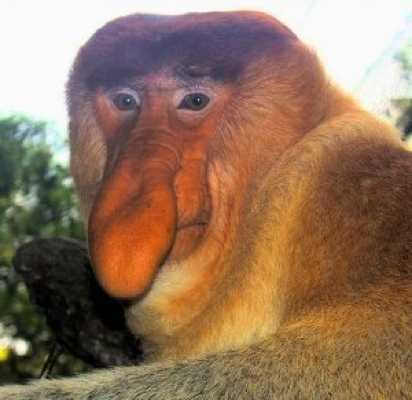 This monkey’s nose is so extreme that people just call the animal it’s attached to the proboscis monkey. It’s the nose monkey. You see that guy over there, with the nose? Yeah, that’s the proboscis guy.

It would be fair to say that proboscis monkeys can have erections for noses. As is the case with most cardiovascular animals, proboscis monkeys experience increased heart rate when they’re excited. As the excitement rises, so does the level of blood saturation in their nasal tissue. With noses engorged thus, a resonating chamber is created that can amplify the sound of calls, especially warning signals. This is quite useful; if one proboscis monkey detects danger, he will become fearful and therefore excited, thus making him better at communicating danger to his compatriots. Super-siren nose that makes you look like Squidward? Extreme. 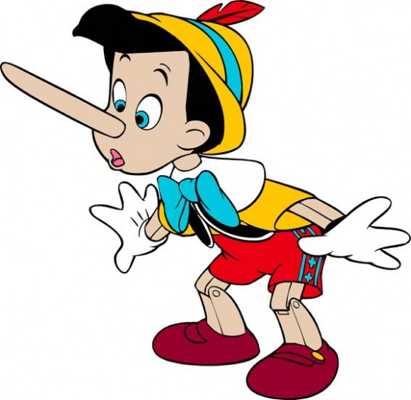 This kid can’t tell a lie without his nose erupting outward like the Ruyi Jingu Bang when Sun Wukong needs to steal cookies from the top shelf. Think about the implications; to weaponize that honker, all Pinocchio needs to do is stand in front of someone, point his nose at their eye, and say, “I’m a real boy! I’m a real boy!” Too bad he gave up his superpower, it was pretty extreme. 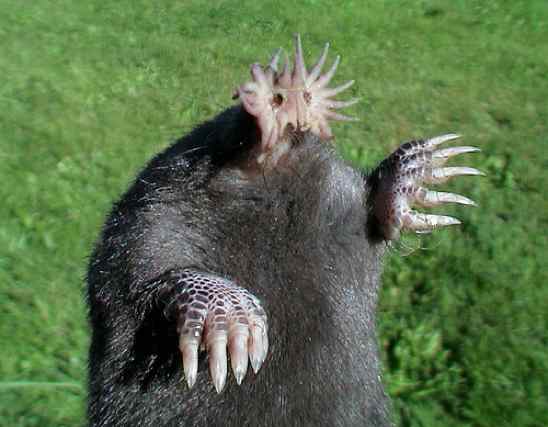 Most animals interpret the topology of their environments with favor to a particular sense. Humans favor sight. Dolphins favor sound. Moles favor touch. And the star-nosed mole possesses the most highly-developed touch organs known, right in its nose.

It would be an understatement to say that the star-nosed mole has two hands growing out its face. It wouldn’t even suffice to say it has four. Not to mention that a light knock to your hands does not kill you. Needless to say, star-nosed moles have mighty sensitive sniffers. This super-sensitivity results from clusters of mechanoreceptors that project up through columns of epidermal cells from the dermis up to the skin’s surface. These structures are made of familiar things–skin cells, nerve endings, and so forth–but their arrangement is so specialized as to earn them the title of “organs” (Eimer’s organs, specifically). And a star-nosed mole’s nose has about 25,000 of them, and it’s only 1cm wide. Your nose barely even contains that many tactile nerve endings.

An article in Nature dubbed the star-nosed mole that “fastest-eating animal” (segues to a fastest-eaters edition of The Most Extreme, but that’s for another time). The heavy myelination of Eimer’s organ neurons improves signal transmission from the sense organs to the mole’s brain, where analysis of the edibility of an object can take as little as 120 milliseconds, which borders on the limits of neuronal transmission speed. This animal’s nose helps it evaluate food in 120 milliseconds. Extreme.

As if that wasn’t enough, the star-nosed mole can smell underwater by exhaling nose bubbles onto something it wants to smell and then inhaling them. How extreme is that? 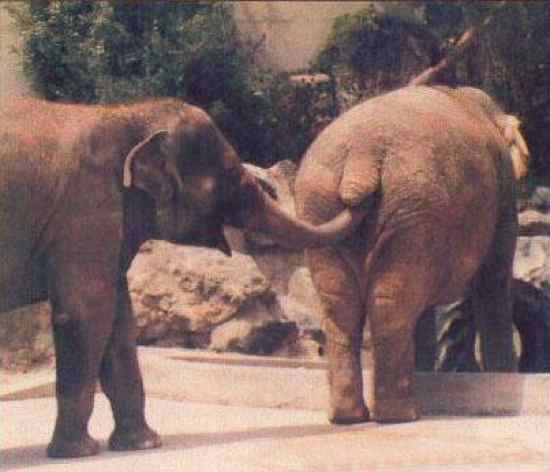 Elephants are sort of extraordinary. They’re the largest living land animals, they mourn their dead, have conveyor belts for teeth, and destroy civilizations when they’re sexually frustrated. Oh and they paint, too.

They also have trunks, which are, of course, just awesome noses.

Elephant trunks are, in many ways, the equivalents of human hands. Elephants use them to greet one another, embrace and play. They use them to pick things up and put food and water in their mouths. They can bathe themselves by sucking up water into the body of the trunk and then spraying it on themselves. They can snorkel. They can pick up tiny seeds without crushing them, plant them, wait for a tree to grow, and then uproot it. And, naturally, they can use their trunks to forage for or store goods in the butts of other elephants. The trunk is a nose that knows no bounds.

And of course, elephants have stupendous olfactory senses, which are augmented by their ability to direct their trunks towards or away from the sources of aromas. Extreme? Yes.