Officially known as the Aokigahara Forest, one of the most mysterious places on the planet is better known as the Suicide Forest. As the name suggests, this is because of the sheer number of people who have taken their own lives there. Literally, hundreds of people commit suicide in this most chilling stretch of woodland each year.

Perhaps the forest attracts people who wish to take their own lives due to its own grim history of suicides – almost like a self-fulfilling prophecy. Or perhaps there really is something truly evil that twists peoples’ minds and thoughts. Or might we find that magnetic anomalies have such a macabre effect? Here are ten reasons that the Suicide Forest is a truly disturbing place.

10 The Place Is Littered With Ribbons 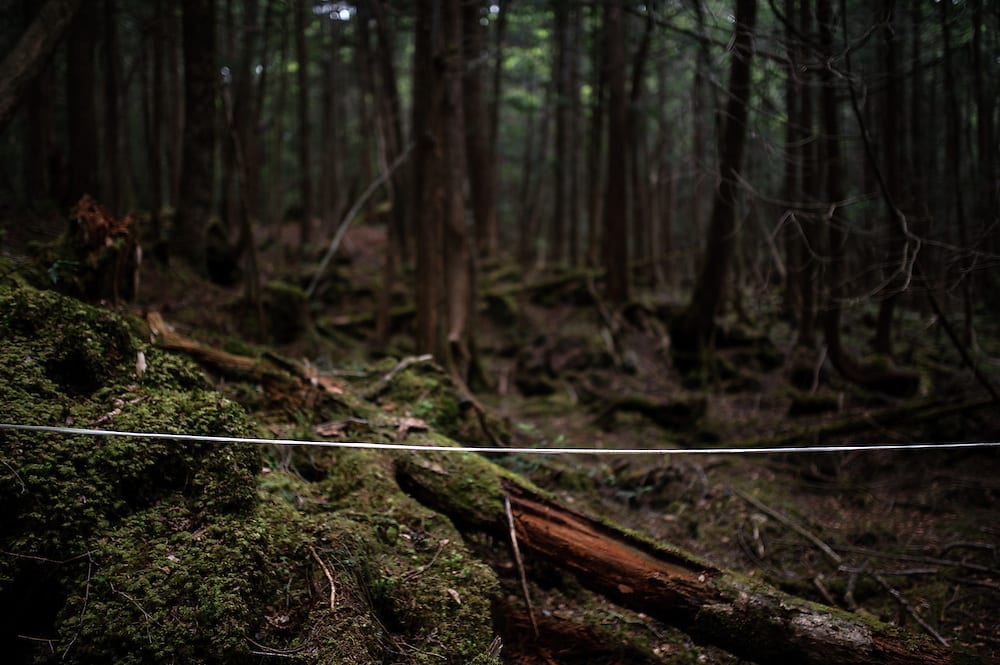 If you venture into the Suicide Forest one of the first things you will notice will be ribbons. And while that doesn’t sound very chilling in itself, the backstory to them is. Each one essentially represents someone who at the very least went into the forest with the aim of killing themselves. However, many people would take a long piece of colored ribbon with them. They would tie it to a tree upon entering the forest. The reason for this was in case the person changed their minds and then could find their way back out again.

Quite often, though, if you were to follow these ribbons, you will often discover a dead body at the end of them. Quite often hanging from one of the trees. It is truly a grim reminder, for the all the other visual beauty of the region, that many people come here and never leave.[1] 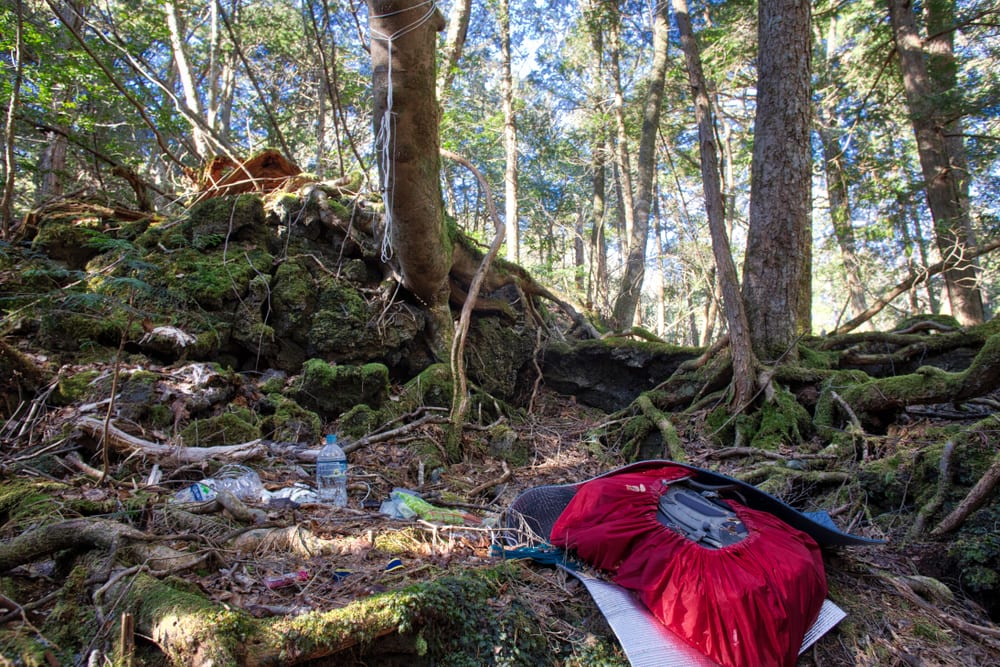 Another harrowing discovery you should expect to find in the Suicide Forest are many personal items. Such things as mobile phones, notebooks, and even items of clothing. Sometimes these items will be discovered in small piles. Almost as if multiple people at different times have stopped in these spots to go over their thoughts. Perhaps for a final time.

You might also discover empty drinks bottles alongside boxes and packets of prescription drugs. Most people who take their own life here do so by hanging themselves. Some of the people who enter, though, opt to overdose on such medication.

Once more, what makes all of these items all the more chilling is the realization that each is connected to a once living person. A person who felt such despair that they took their own life here. And just to hammer that point home further, they very likely did so near the spot where the items are found.[2]

8 The Ghosts Of The Dead “Encourage” Suicide 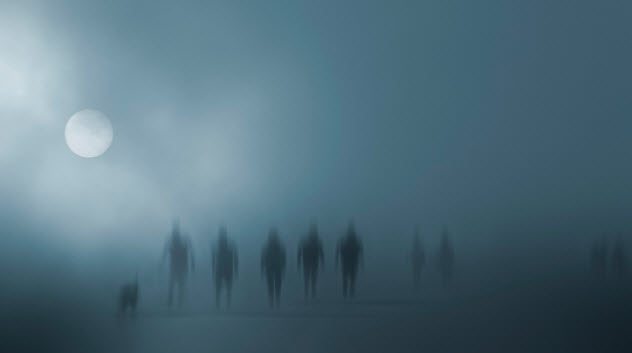 As we might imagine there are numerous tales of ghosts and spirits residing within the forest. However, some legends suggest that these spirits even encourage people to take their own lives as they roam through the trees.

It is a widespread belief in Japanese folklore that when a person dies a sudden or violent death, this will cause them to become a Yurei. These ghostly spirits are said to transfer their rage and anger on to those who wonder their way. Many people, for example, often speak of how they feel suddenly anxious with no reason. Or how waves of fear or panic overcome them without warning. Imagine, then, having these feelings while already dealing with genuine suicidal thoughts.

We might also note that there are several other locations around the Earth where people speak of suddenly experiencing intense negative emotions. As we will examine further in our last entry, the reason for this might one day prove to geological as opposed to paranormal.[3] 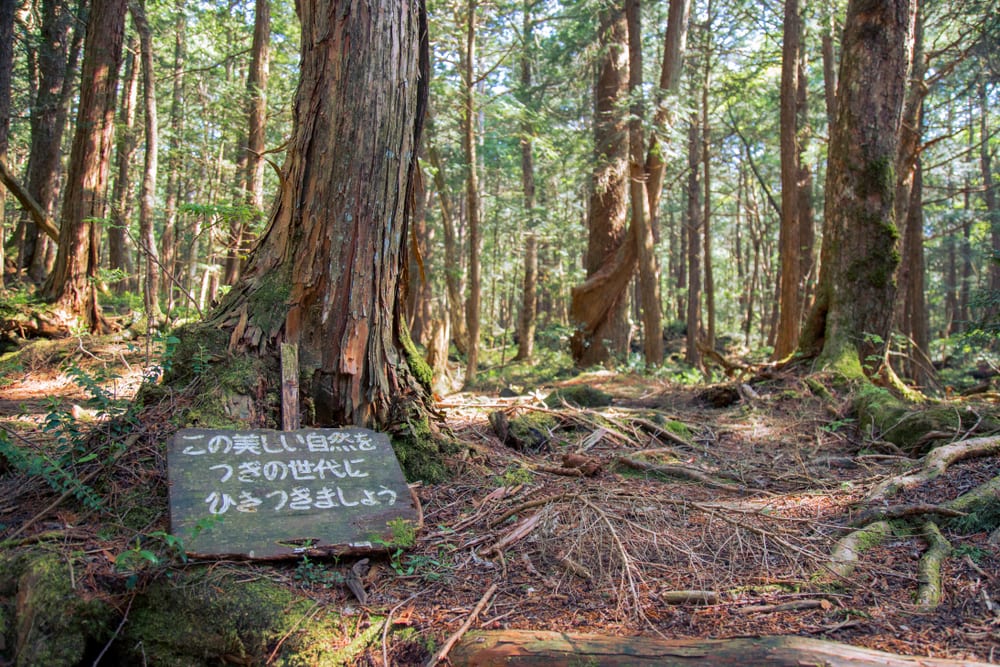 If any of the above doesn’t hammer home the sheer number of people who have taken their own lives in the Suicide Forest, then the numerous warning signs dotted around warning people specifically NOT to commit suicide perhaps will. And these signs can be found everywhere throughout the forest.

Not only do these signs contain the warnings attempting to convince people to change their minds against suicide, but they also advertise multiple phone numbers of organizations who attempt to assist people in such a dark frame of mind.

Whether these signs do make a difference to those who enter the forest with thoughts of taking their own lives or not is perhaps open to debate. The fact that authorities have taken these measures, however, perhaps demonstrates how seriously they take the problem. And when we view our next point, it is easy to see why they would do so.[4]

6 Around 100 Bodies A Year Are Found In The Forest 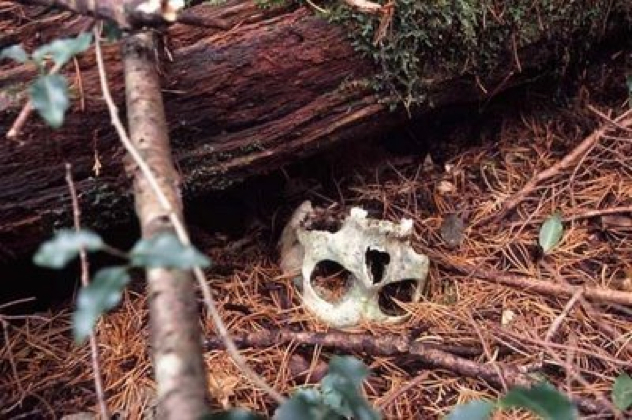 It is thought that around 100 dead bodies each year are removed from the macabre forest. And what’s more, there are many more that remain there for years before discovery.

Special groups venture into the forest. If they find any dead bodies, they immediately notify the police. One member of the group – usually an older member – will usually remain at the scene so as to ensure nothing is disturbed. If by chance they discover someone alive and possibly still contemplating taking their own life, they will escort that person back to “safe houses” near the forest. Once there, they are strongly encouraged to accept the help they need to return from the dark place in which they find themselves. It is not hard to imagine why those who perform these grim duties grow tired of “tourists” visiting the forest and treating it as a spectacle.

However, as we will explore in our next point, we can’t be absolutely sure of these figures as Japanese authorities no longer publish them.[5]

5 Official Numbers Are No Longer Given

The Sea Of Trees | Official Trailer HD | A24

In a further effort to halt the sheer number of people arriving at the Suicide Forest to take their own lives, authorities would take the decision to stop publishing official numbers. And as well as those who succeed in taking their own lives, there are also hundreds of other attempts that for various reasons, perhaps they were talked out of it or simply thought better of their planned action, that are not successful.

Not only were the numbers appearing to attract the attention of the Japanese population, but even filmmakers would set their stories there, usually revolving around the protagonist committing suicide or entertaining thoughts thereof. Perhaps one of the best examples would the Gus Van Sant film Sea of Trees from 2015.

Once more, this is perhaps a great demonstration of just how serious a problem the suicides actually are. Whether this action has achieved a drop in suicides in the forest remains to be seen.[6]

4 Camping Overnight Is Frowned Upon And Discouraged 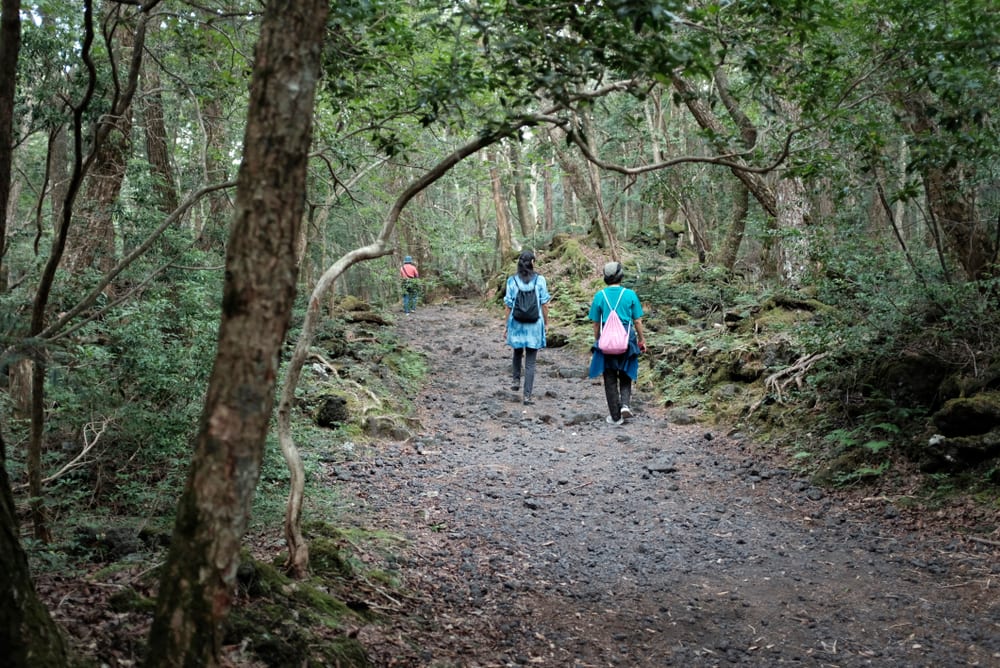 For those looking to pitch a tent and camp in the Suicide Forest you will be strongly discouraged from doing so. And even then, you must really stay on the official trail paths. Ultimately, such ambitions are seen as disrespectful by many of Japanese. Perhaps because of this, those looking for grim adventure often take themselves deep into the forest away from the trails and watching eyes. This often leads to people becoming lost and disorientated.

What’s more, the temperatures often drop to freezing at night, which has the potential to cause further problems for those looking to stay in the forest overnight.

The main reason for this, though, is to discourage people to stay in the forest for a prolonged period of time. Especially if they are harboring thoughts of suicide. And when we move on to our next point, it is more than easy to see why.[7]

3 Many Believe An “Evil Energy” Resides In The Forest 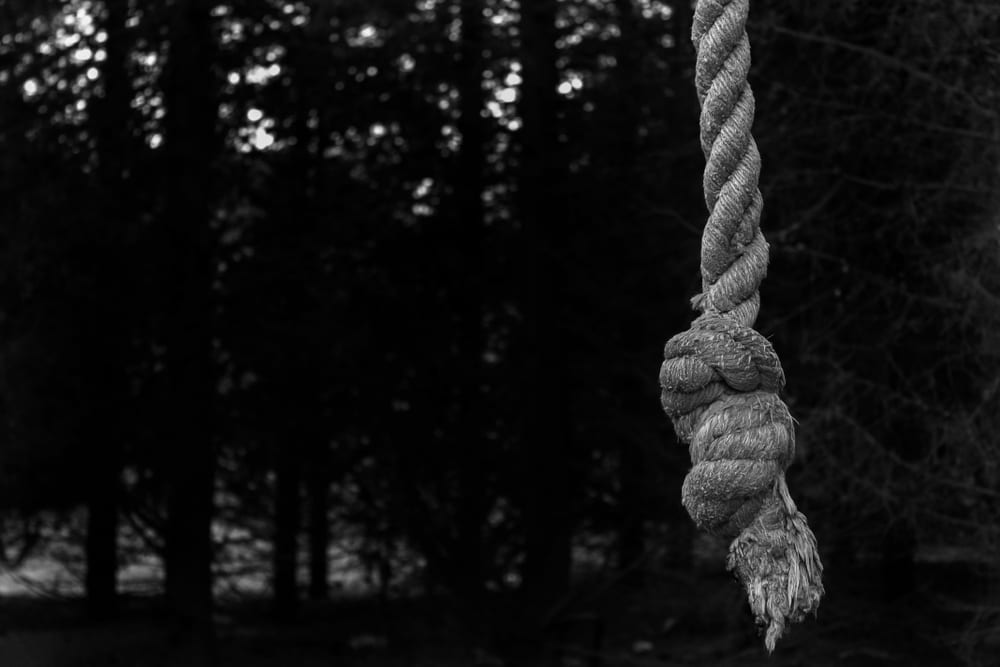 In a similar way to the legends about ghostly apparitions many legends revolve around the idea of the Suicide Forest simply being a place of pure evil. Whether due to spirits or simply an evil energy, some people subscribe to the theory that bad things happen there because of a supernatural force.

If we believe that evil manifests from past events, then the fact that so many people have taken their lives in this spot would certainly contribute to that. However, even before the spate of suicides in the late 20th century, the forest had a grim past. A good example of this would be the practice in the 1800s when many families would bring their elderly to the forest and leave them so they “could die with dignity” in the woodland.

It is certainly an intriguing if gloomy thought. However, for our next point we will turn to the history of the forest and how it came into being. And ultimately, why it might have such a dark spiritual nature.[8] 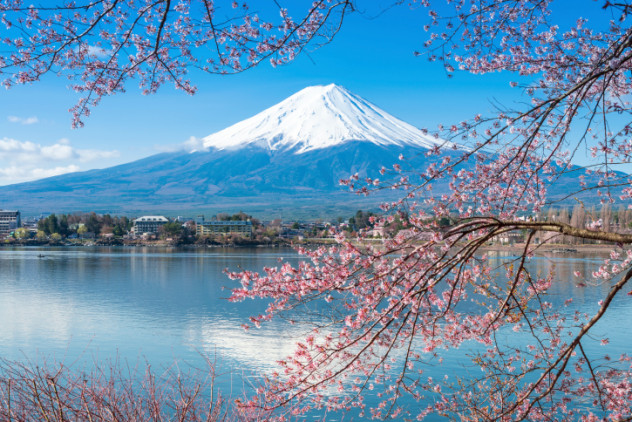 The creation of the forest was down to an eruption from Mount Fuji in 864. The result of this was 12 square miles of lava being spread over where the forest now stands. Once the lava hardened nature took back the region as trees and hemlock grew in abundance. In the centuries that followed the Japanese worshiped Mount Fuji as a god. Furthermore, a great spiritual attachment was formed between the populace and the region.

This eruption also led to the formations of strange cave systems and caverns within the forest. Many of these are unexplored and often have myths and legends attached to them. This itself adds more layers of intrigue to the mysterious woodland.

Whether this beginning to the forest has a connection to its dark nature is speculative and up for debate. For our last point, though, we will turn to science and recent discoveries that might shed light on way the Aokigahara Forest seemingly causes, or at least, amplifies dark thoughts.[9] 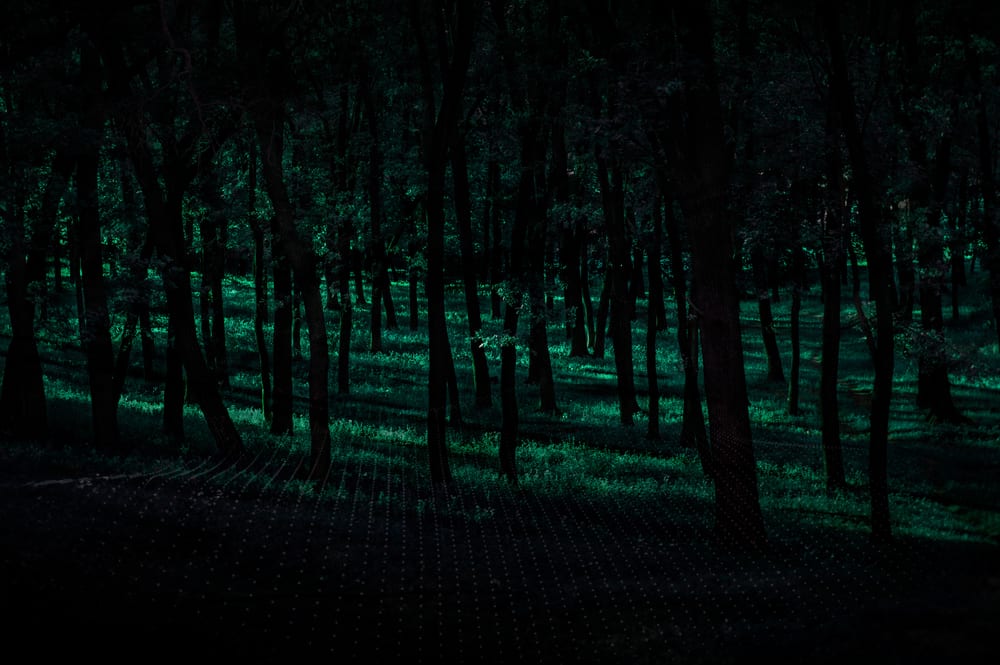 In recent years some researchers have suggested that geomagnetic anomalies might induce such dark thoughts in people. Especially those who are already suicidal anyway. It is the thought of some researchers that these geomagnetic anomalies take place under the ground where the forest resides. And given that these disturbances change all the time, that might show us why the suicide rate seemingly shot up in recent decades in the macabre forest.

The team who conducted the research also looked at other records of geomagnetic activity over the years in other countries. They would find that these often resulted an increase in suicides. And these, in turn, decreased when such geomagnetic anomalies ceased.

Perhaps one particularly interesting conclusion of the study was that these geomagnetic disturbances seemingly affected men much more than women. While more research and study is required on this theory, it is certainly an intriguing one.[10]